There was a time when adding a new graphics card to a laptop was a pipe dream, but in the past few years, it's become quite a reachable goal thanks to advancements through the Thunderbolt protocol. Typically aimed at the idea of gaming but adding a high-powered graphics card can accelerate much more than games now that many programs use GPGPU compute capabilities for hardware acceleration and content creators know that better than anyone. The AKiTiO Node Titan eGPU makes deploying a much needed GPU upgrade to your Thunderbolt 3 capable laptop or computer!

The fairly attractive $335 price tag makes the AKiTiO Node Titan from OWC an attractive option for doing just that. Built with solid metal construction and a retractable handle the Node TItan is not just your 'gamer' kinda unit, it's solid and rugged, ready for rapid deployment thanks to a super simple setup with only two cables.

Packaging for the AKiTiO Node Titan is pretty straight forward. You'll find all the pertinent information available on the box. The packaging is actually quite attractive and easy to transport but the inside is just as it is on the outside with the good decision of using soft foam to protect the unit from shock during shipping.

All the extra accessories are tucked into a small box with the instruction manual along with the only cables needed for using the Node Titan; a power cable and Thunderbolt 3 cable.

Once pulled out of the box you're presented with the unit itself. The AKiTiO Node Titan is quite imposing for just an eGPU enclosure with its solid metal construction, retractable handle, and almost monolithic design.

The GPU front-facing side of the enclosure features a nice mesh ventilation panel for all types of GPUs to pull in the fresh air. This design is especially useful for dual or triple axial fans.

Popping the top of the Node Titan is as simple as releasing the two spring secured rear thumbscrews and sliding the top back slightly, then you're in. Inside you'll find the GPU retention screws are extended so you can easily reach them for extraction and reinstallation.

But at the bottom, you can't really see it, is a 650w SFX PSU by FSP that is willing and able to juice up whatever graphics card you can fit in this bad boy and still power (up to 85w) your laptop as well! We were even able to fit in the ZOTAC GAMING GeForce RTX 3090 in this sucker! But for a more practical test, we paired up everything with a SAPPHIRE PULSE Radeon RX 5600 XT.

For my testing with the AKiTiO Node Titan eGPU, I paired up the only Thunderbolt 3 featured device I have access to that I use regularly, the LG Gram 17 (2020 Edition) that features an Intel Core i7-1065G7 (16GB DDR4 3200, 1TB NVMe, Intel Gen11 Graphics). I paired the AKiTiO Node Titan with the SAPPHIRE PULSE Radeon RX 5600 XT as it's a fairly reasonably priced graphics card that one might pair with an eGPU for an added boost and thanks to the bottom exhaust fan on the Node Titan we don't have to worry about heat building up inside the unit.

Installation was simple as it goes, plug in the power, plug in the Thunderbolt 3 cable, install the Radeon Settings and we were good to go right away. I first tried using the Node Titan to power the internal display on the LG Gram but the 2560x1600 resolution was a bit tough to power through the bandwidth limit of the cable in a to and from the stream, but powering an external monitor yielded a pretty good gaming experience despite the lackluster performance from the Core i7-1065G7's 15w limitation.

However gaming is not what I would honestly recommend this one for, its shining moment is with GPGPU acceleration and workloads that benefit from compute boosts. A good example of this would be in video production. One of my biggest criticisms of the LG Gram 17 was the potential to be a workstation powerhouse but the 15w limitation and lack of a dedicated GPU kept it from really shining, but when I added the Node Titan + 5600 XT solution made video editing on Davinci Resolve 16.2 a cakewalk and made it quite useful for actually doing work on. So I'm able to get insane battery life on the go but when I sit down to get work done I plugged in the AKiTiO Node Titan and BOOM, in an instant, it's ripping through my workflow. Below is an example of a 3-minute video that has 3 layers and each clip with color correction and more added rendered in 1080p29.97 MP4 100MB/s.

It's easy to not be that impressed but we see when we use OpenCL acceleration in the export of the video file we see a time reduction of right at 60%, that alone is more of an impact than going through the hassle of buying a newer/bigger laptop. That's only one aspect of it, the other was the increased workflow with the GPU encoding the timeline and adjustments. Even using Excel and GIMP was noticeably much more snappy.

So easy to set up, quick to deploy, and massive gains in workflow performance while also being able to enjoy some games? What's not to love? Well, it's not a solution that is for everyone, it's ultimately bulky and expensive to work with but has legs and can be upgraded over time so the pricing impact comes down to your willingness to invest long term with something like this.

The biggest complaint I have with the unit as a whole is the lack of expansion on the AKiTiO Node Titan itself. The only expansion you'll get is the outputs from the graphics card alone, there are no additional USB ports or ethernet cables. This simple thing keeps it from being able to act as a powerful single-cable docking solution for laptop users. It's mostly a one-trick pony but does that trick so well!

The AKiTiO Node Titan eGPU is a relatively accessible and well-priced option in the external GPU world. Built like a tank but easy to work with makes the Node Titan a good option for most people who need to add some serious graphics horsepower to their portable Thunderbolt 3 capable laptops but not for those looking for a single cable dock syle solution who were hoping to be able to attach a monitor, mouse, keyboard, speakers, and ethernet. Those folks might be best served to continue their search, but those who just want to add a GPU for their intended needs might have just found their own tiny Titan. 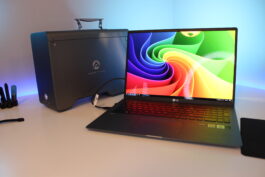 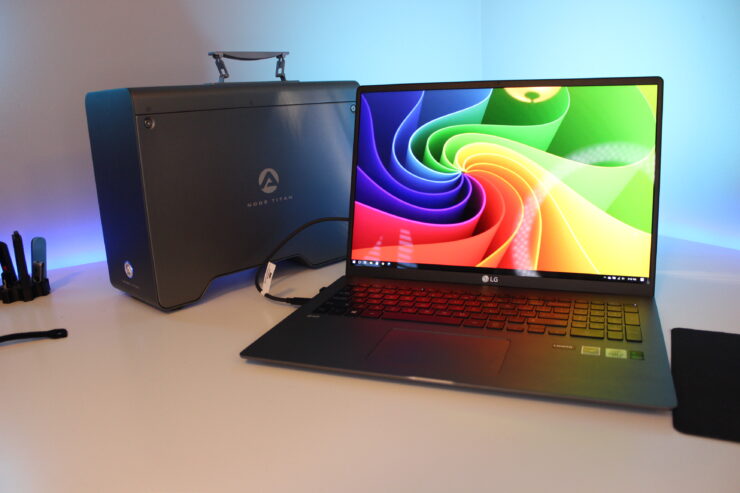 The AKiTiO Node Titan eGPU is a relatively accessible and well-priced option in the external GPU world. Built like a tank but easy to work with makes the Node Titan a good option for most people