The Pathless Review – A Trail Worth Sticking To

Developer Giant Squid burst onto the scene in 2016 with the beautiful, relaxing underwater adventure Abzû and fans have been rightfully awaiting something new from the talented studio since. That something new is The Pathless, which sees Giant Squid leave the chillout genre behind, in favor of intense action, killer boss fights, and sprawling open landscapes. Ah, but not everything has changed – like its predecessor, The Pathless arrives as a PlayStation console exclusive, including a launch day release on the PS5. Needless to say, this has garnered the game a bit of extra attention.

No doubt about it, The Pathless represents an ambitious step forward for Giant Squid, but are they on the road to success or lost in the woods? It’s time to take a hike through both the good and bad…

The Pathless casts players as the Hunter, an ace archer on a quest to discover the source of a mysterious gloom that has befallen the world. Aside from that, we don’t learn much about her backstory. The Hunter’s mission takes her to an island where she comes upon a great eagle spirit, which has been struck down by the Godslayer, a menacing dark force who wants to compel the world to follow a single "righteous" path. Turns out the eagle spirit is the mother of the island’s other deities, all of whom have been corrupted by the Godslayer. Needless to say, mama eagle ain’t happy about that, so she transforms herself into an actual flesh-and-blood bird in order to help the Hunter free the island’s four spirits of their corruption and kick the Godslayer’s backside. Overall, it’s a pretty standard Zelda-style narrative, although the game does provide some interesting hints about what happened on the island before you arrived there through bits of lore found on scattered corpses. It’s fairly dark material, as you’ll uncover tales of warring cults, twisted magic, and friends and family turned against each other. 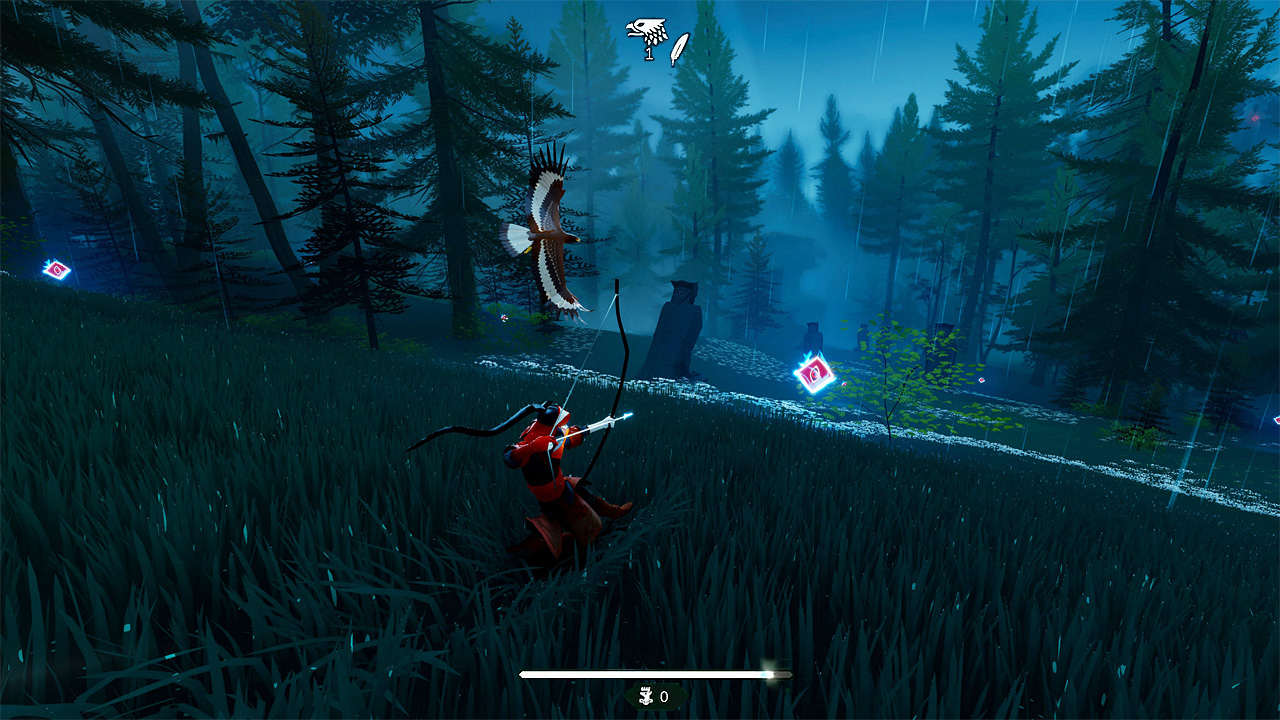 While The Pathless’ backstory is pretty heavy stuff, the Hunter’s moves are anything but. You can dash around at breakneck speed pretty much non-stop so long as you continually shoot the eye-shaped talismans floating all over the world. Don’t worry if your aim isn’t up to snuff, shooting is entirely automated -- all you have to do is hold down the button for a second to draw your string (which feels great with the DualSense’s adaptive triggers) and release. That may sound overly-simplified, but The Pathless isn’t about precision, it’s about getting in the proper flow.

Each talisman you shoot not only partially refills your running gauge, it also gives you an additional boost, and if you time your shots correctly you can really get cooking. Of course, we can’t forget about your eagle, which you can use to glide and boost up to high ledges. Once everything is clicking, the feeling of running, leaping, and soaring through the world is truly gratifying. It helps that the world you’re dashing through is downright gorgeous. Much like Abzû, The Pathless features a super-crisp stylized look and bold color palette, with each level changing from harsh blues and reds to vibrant natural hues when you free it from corruption. The animation is silky-smooth and satisfying, especially if you opt to play with the PS5’s 60fps Performance mode. The Pathless’ beautiful visuals are backed up by a properly epic soundtrack from Journey and The Banner Saga’s Austin Wintory. 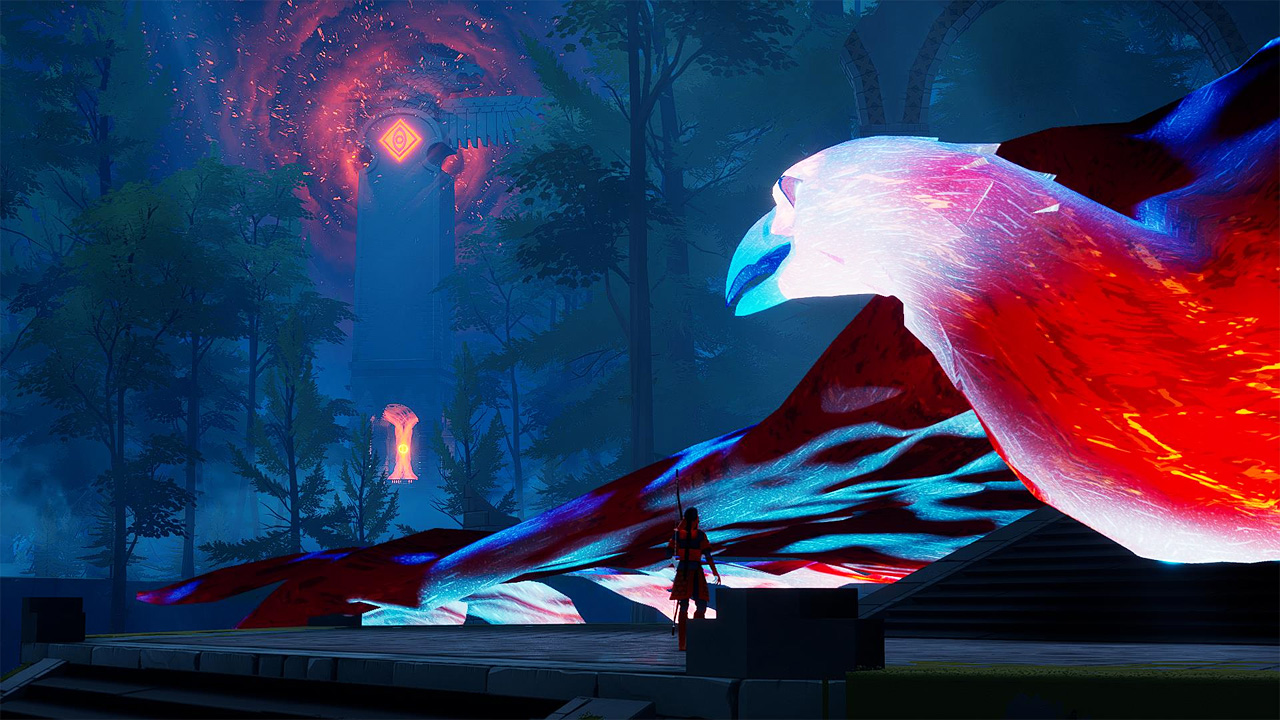 Unfortunately, while the Hunter may be a badass, the goals The Pathless presents her with aren’t always that exciting. The game is broken up into four main levels, each of which contains three towering obelisks you need to reactivate by collecting shiny trinkets. The Pathless doesn’t include any sort of map, but you can activate Spirit Vision, which makes all the key points in your vicinity glow bright red. So, in the end, you’re still basically unlocking towers and following markers like you would in any Ubisoft open-world game, just without the precision of an actual map. Unlocking the tokens needed to activate the obelisks usually involve solving puzzles, which require you to do typical things like shoot targets, light torches, and press switches. Y’know, Zelda stuff. Your eagle friend can help you out during these sections, carrying blocks that can hold down switches and moving certain objects along rails. It’s a fine setup, and some of the game’s puzzles are fairly clever, but it’s all stuff action-adventure fans have seen 100 times before.

Ah, but The Pathless isn’t all laid-back jogging around and puzzle solving. As mentioned, each level is overseen by a corrupted spirit, which moves around the map in a large menacing red cloud. If you happen to be engulfed by this cloud, your eagle will be blown away, and you’ll have to stealthily make your way back to it without being spotted by the patrolling god. Get caught and you’ll lose some of the collectible currency you use to upgrade your eagle’s flapping ability. These stealth challenges are incredibly striking at first but eventually, they start to get old, as they never really change. The random way the red cloud moves around the map, and the fact that it can interrupt you right in the middle of a tricky puzzle, only adds to the mounting frustration. 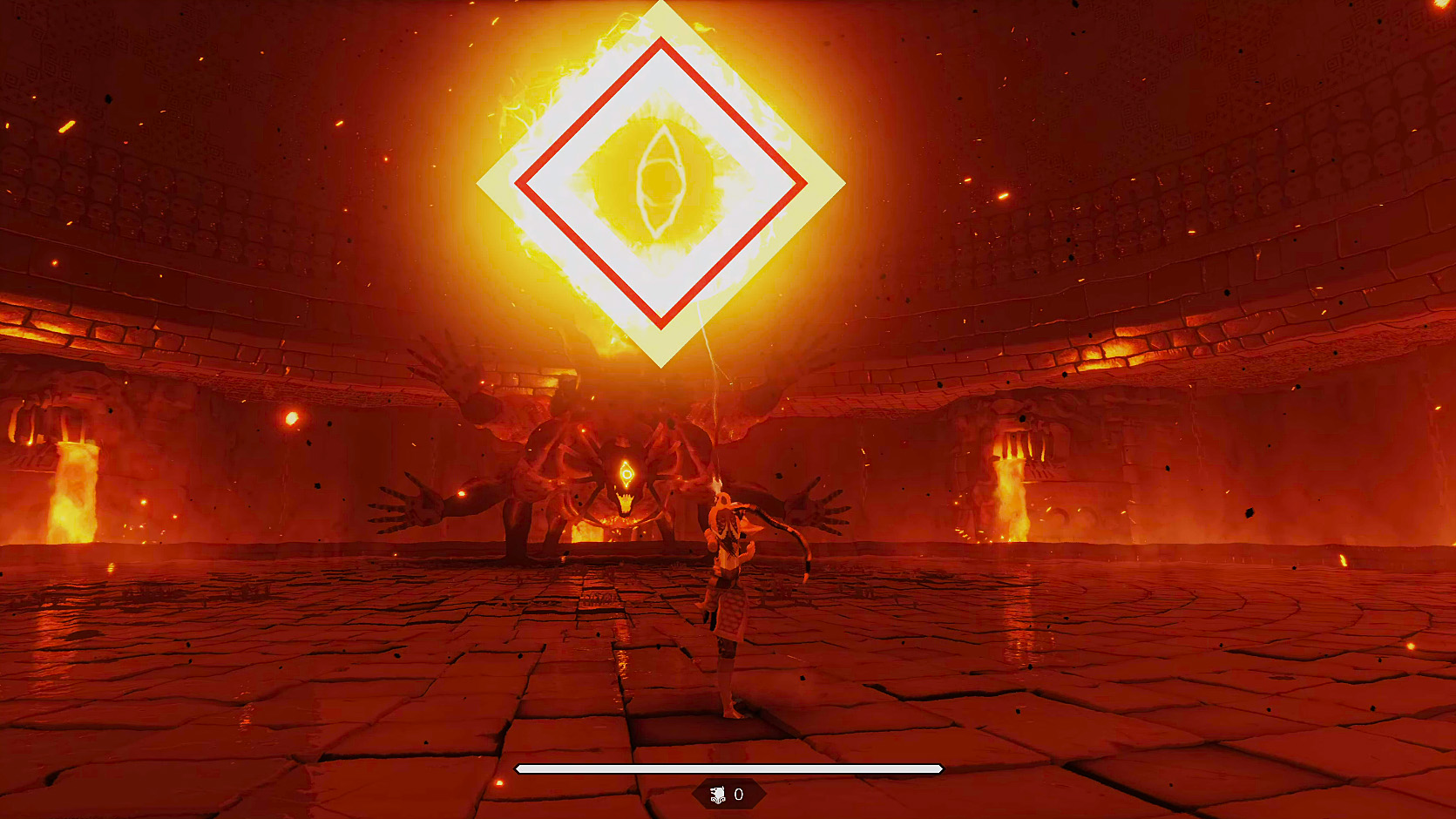 Thankfully, once you light all three obelisks in a particular level, you get to enter a full-on boss fight with its corrupted spirit, which is a lot more fun than the stealth challenges. You start with a wild high-octane chase, which are always intense and exhilarating, and one of the few times the Hunter’s speed is really put to practical use. Once you take down your quarry, it’s time for a more traditional mano a mano battle, with an emphasis on timing and pattern recognition. All the bosses have multiple phases, and sometimes the game mixes things up a bit, requiring you to take refuge from waves of fire or do without your eagle for a couple of minutes. You can’t actually die during these fights, absorbing too many hits just knocks you out of the boss’ arena for a quick breather, but that doesn’t diminish their intensity. You can be exciting and accessible at the same time!

As intense as The Pathless can be at times, the game does start to feel a bit repetitive halfway through. Around the third level, I was feeling a bit done with obelisks, pressing switches, and that damn red cloud, but I’m glad I stuck it out, because this game really brings it home in the final act. The game’s first three stages offer a somewhat similar forest theme, but the game’s fourth level is an intimidating wintery wasteland that’s much larger in scope than anything that’s come before. The area is full of steep, slippery hills and cliffs that make navigation a satisfying challenge and the puzzles get a bit trickier as well. Without giving too much away, this all leads to a gripping climatic chapter that does away with exploration in favor of a series of epic action set pieces and boss fights. 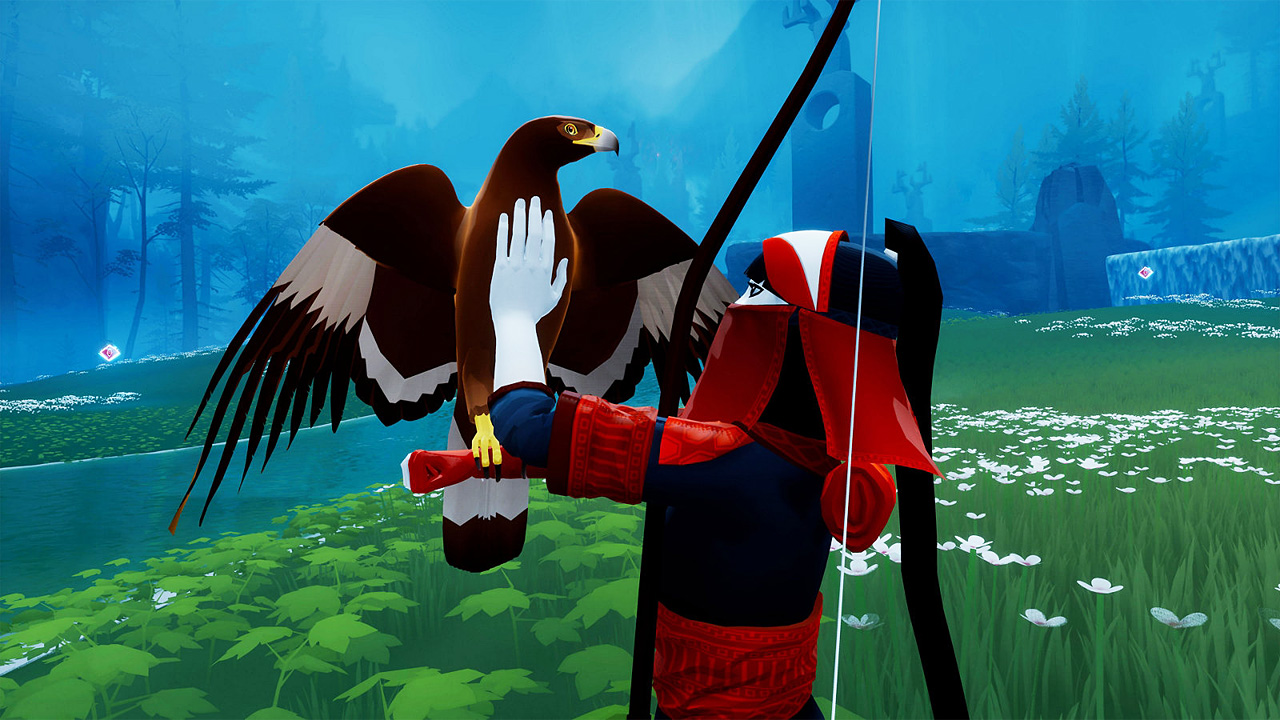 Without ever getting schmaltzy, The Pathless does a great job of building up your relationship with your eagle companion throughout your adventure. Every time you rescue your buddy from the red cloud, you have to manually wipe the ashes from its feathers, which may sound like a cutesy gimmick, but it really does help create a bond between the player and their virtual bird. Every time the game put the eagle in peril I was on the edge of my seat, and when we finally took down the Godslayer together I’ll admit I got a little choked up. Y’know, for a second. Ah-hem. A good story manipulates you without you even noticing it, and in the end, Giant Squid have woven a heck of a good story here. Not a long story, mind you, as the game can be finished in around 5 or 6 hours if you’re focused. But hey, there’s plenty of extra stuff to collect, and the game is named The Pathless, so don't be shy about getting out there and exploring.

This review was based on a PS5 copy of The Pathless provided by publisher Annapurna Interactive. You can grab a copy of the game here.

The Pathless makes a fantastic first impression, with its arresting visuals, fun mechanics, and fascinating dark world. The game’s middle section does start to drift a bit, but it sticks the landing with a great final level and an electrifying and emotionally-satisfying climax. Like The Pathless’ feathery co-star, Giant Squid has raised their game to lofty new heights.