2016’s Hyper Light Drifter didn’t reinvent any wheels, but it was a stylish, mechanically-sound Legend of Zelda homage and a generally promising debut for California-based developer Heart Machine and its founder Alx Preston. Over five years later, Heart Machine and Preston return with Solar Ash, a game that shares some aesthetic qualities with Hyper Light Drifter while boldly forging ahead with a fully 3D world, more ambitious story, and a focus on traversal and exploration over combat.

Of course, as many a creatively-stymied dev will tell you, following up on a surprise indie hit is no easy thing. Is Heart Machine still beating strong or does the studio’s latest fall victim to the dreaded sophomore slump? Time to see if Solar Ash can take the heat…

Solar Ash casts players as Rei, a “Voidrunner” whose planet is about to be pulled into a massive black hole known as the Ultravoid. Rei decides the only way to stop the Ultravoid is to jump directly into it (naturally) and inside she finds the jumbled remnants of other planets, civilizations, and people who previously got sucked in. Rei determines the best way to save her planet is to activate the Starseed, a massive sword-like monolith that sits in the middle of the Ultravoid. Seems simple enough, but there are plenty of hints that things aren’t quite as they seem, leading to a fairly-well-telegraphed final-act twist.

Solar Ash does more to flesh out its world than the narratively-efficient Hyper Light Drifter, with plenty of spoken dialogue, sidequests, and supplementary material to read, but I didn’t find the end result that compelling. The game does a lot of telling rather than showing, with the story mainly being delivered by monologuing NPCs and assorted logs scattered around the world. While her importance is ultimately revealed, Rei feels like an outsider for most of the game, and so did I, as what you’re doing and the story the game is telling feel largely disconnected.

While the writing didn’t really grab me, the world of Solar Ash is certainly striking looking. Lots of indie games have gone for the stylized flat-textured look since Journey popularized it a decade ago, but Heart Machine really makes it sing with sharp edges, vibrant colors, and some impressive architecture and giant boss designs. On the audio front, Solar Ash’s music is mostly concerned with setting the mood rather than providing memorable melodies, but the game’s voice acting is well done (something you can usually count on with Annapurna-published games).

As for how Solar Ash plays, Rei can glide around the world like a speedskater (or perhaps a particularly graceful roller derby player), double jump, rail grind, and grapple onto certain points. Combat is very simple, with players simply mashing a single button until enemies explode. And that’s about it. Fliting around levels feels great and the platforming physics are refreshingly polished for this tier of game, but the experience never really changes. This may seem like a Metroidvania-style game at first, but it’s really not, as Rei never gets any new abilities. You can collect new outfits, but they only provide passive benefits and aren’t essential to getting through the game. You can expand your health by collecting and cashing in Pepto-Bismol-like globules scattered around the world, but each boss you beat knocks some back off, meaning you’re constantly losing and re-purchasing the same chunk of your life bar. Not terribly satisfying.

The feeling that what you’re doing in Solar Ash never really changes much is made worse by the rigid formula the game follows. Every time you enter a new region of the game's world, your first task is to find and activate your robot helper Cyd, who provides a sort of home base where you can switch outfits, buy health upgrades, etc. Then you have to find and destroy four or five eyeballs strewn around the level. These eyes are embedded in black gunk and you usually have to strike a series of targets within a strict time limit to expose the eye for a final blow. Destroy all the eyes and the stage’s boss, or Remnant, is awakened. Beat them, then head on to the next area – rinse and repeat six times.

Now, credit where it’s due – while its structure is repetitive, Solar Ash’s level design is rock solid. Each area of the game has its own unique theme and usually introduces a new mechanic or threat, ranging from pads that launch you into the air, to mushrooms that spawn grindable rails, to pools of caustic acid. Finding your way around levels often feels like a fun environmental puzzle and the game does a solid job of guiding the player without bombarding them with tutorials and obvious hints. That said, I would have appreciated a more useful map system. As is, you have to rely on waypoint markers, which aren’t always terrible helpful in Solar Ash’s twisted, gravity-defying stages where an objective “500 feet” away might be above you, below you, or behind some impassable obstruction.

Boss fights are essentially all the same, playing out as extended takes on the eyeball-stabbing challenges. Awakened Remnants will lumber around the map, but despite their towering size, they don’t pose much of a threat. You latch onto them with your grappling hook, then skate a pre-determined path around their bodies, hitting a series of targets until their weak spot is exposed. Do this three times and they’re done. These battles can be exhilarating, but again, the strategy remains essentially the same for all of the game’s bosses and issues with camera angles can make them more frustrating than they need to be.

Ultimately, I can’t say Solar Ash is poorly designed, far from it, and yet, the game felt stretched thin well before its modest 7-to-8-hour campaign had come to an end. As mentioned, there’s plenty of side content to pursue as well, but I suspect many players will stop feeling this black hole’s pull before reaching 100 percent completion.

This review was based on a PS5 copy of Solar Ash provided by publisher Annapurna Interactive. 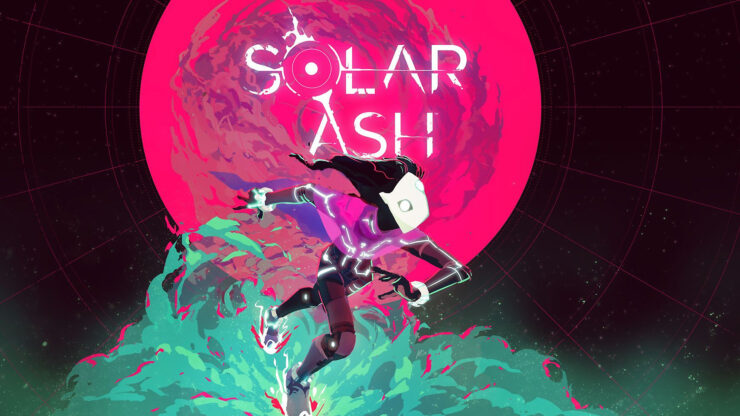 Solar Ash makes a good first impression with its silky-smooth controls, eye-catching visuals, and bombastic boss battles, but a lack of character progression or changes to core mechanics eventually drains some of the life from the game. Solar Ash is a solid action-platformer, but it doesn’t really rise above the many other indies occupying the same space, and ultimately, you may find your memories of the game disappearing rather swiftly into the void.

Bounty Star Offers a Mashup of Hardcore Mech Action, Farming, and Base Building in 2023