OlliOlli World brings the pain and misery (from getting bailed out) that is synonymous with skateboard video games to the world of platformers. However, some people might be surprised that this game is the third entry of a longstanding series of games that started life as a PlayStation Vita game.

While I am not knowledgeable about the previous entries in the series, I was given the opportunity to review this game that I marked as an honorable mention in Wccftech’s most anticipated platformers list. I was deeply interested in the title because I enjoy skateboarding games and the idea of a platformer using skating tricks intrigued me.

So, how does this game fare in the world of platformers? Is it a unique alternative that can be fun to play while also representing most of the tricks that define the skateboarding culture? Let’s find out with this review. 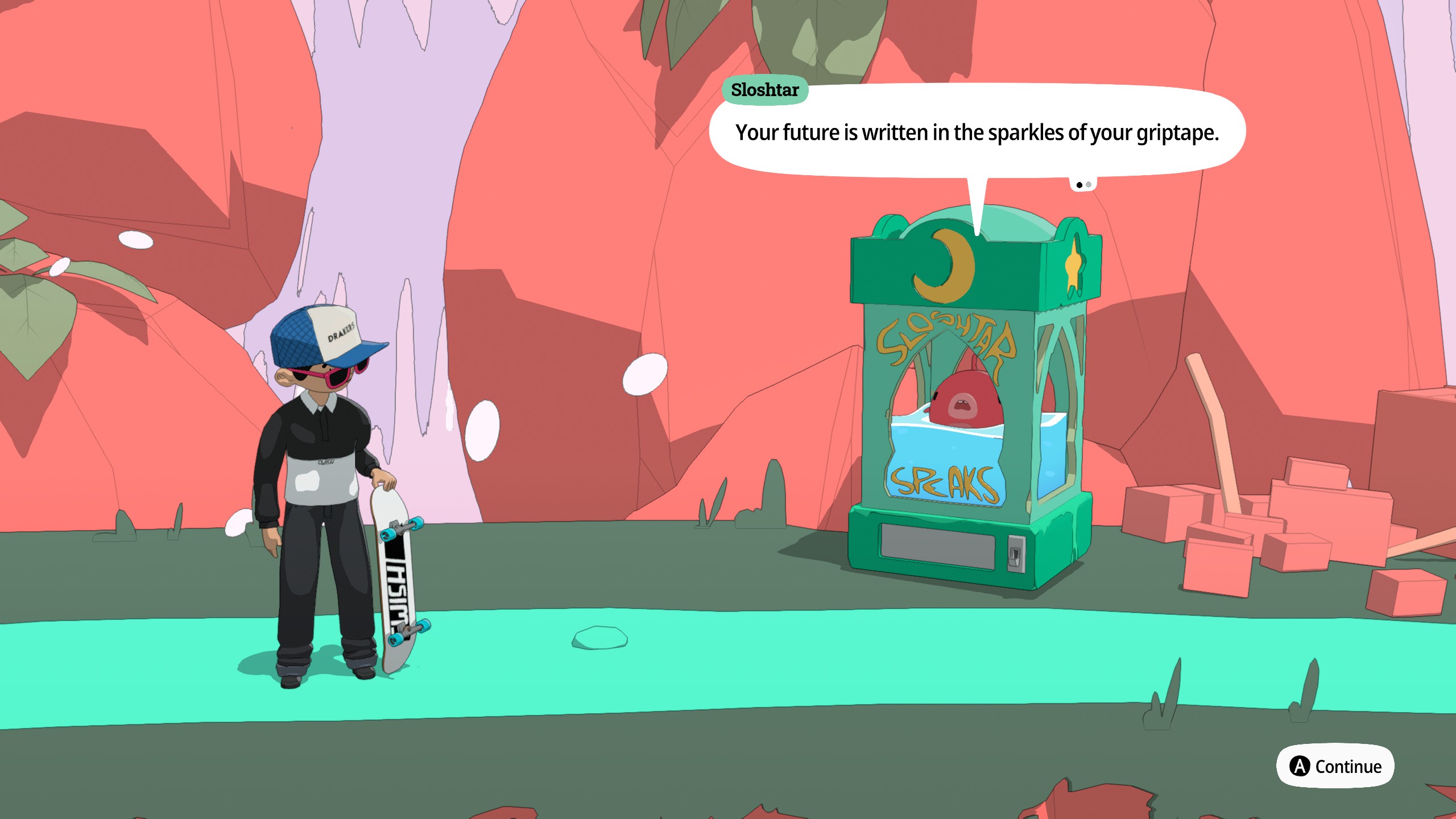 OlliOlli World’s selling feature is that the game is extremely easy to get into. However, once I got to the further stages in the game, I was surprised at how challenging they became. I went from barely stringing a combo together with a couple of nose grabs and the occasional manual to grinding between big chasms while performing stunning tricks.

The game moves forward for you; all you have to do is focus on clearing the platforming challenges. You perform jumps with the left analog stick while the right analog stick is reserved for aerial grabs. Of course, since this is a score attack game, a big emphasis is put on stringing together combos and doing as many varied tricks as possible.

To give you an idea, there are a lot of tricks that require motion inputs to perform. Things such as an Impossible require you to perform 3 full circle motions with the left stick. Sometimes it’s required for you to perform a quarter circle forward and then a half-circle back motion. The same deal applies to special tricks that expect you to make certain motions while pressing A or B on the controller.

That’s not all. There’s also grinding (Achievable by holding down a direction on the left stick while on top of a grinding rail), wall riding (same motion but against a wall), manuals (tilting the stick left or right+A), and other kinds of tricks that not only add to the combo count, but they also keep the flow of the stage going. 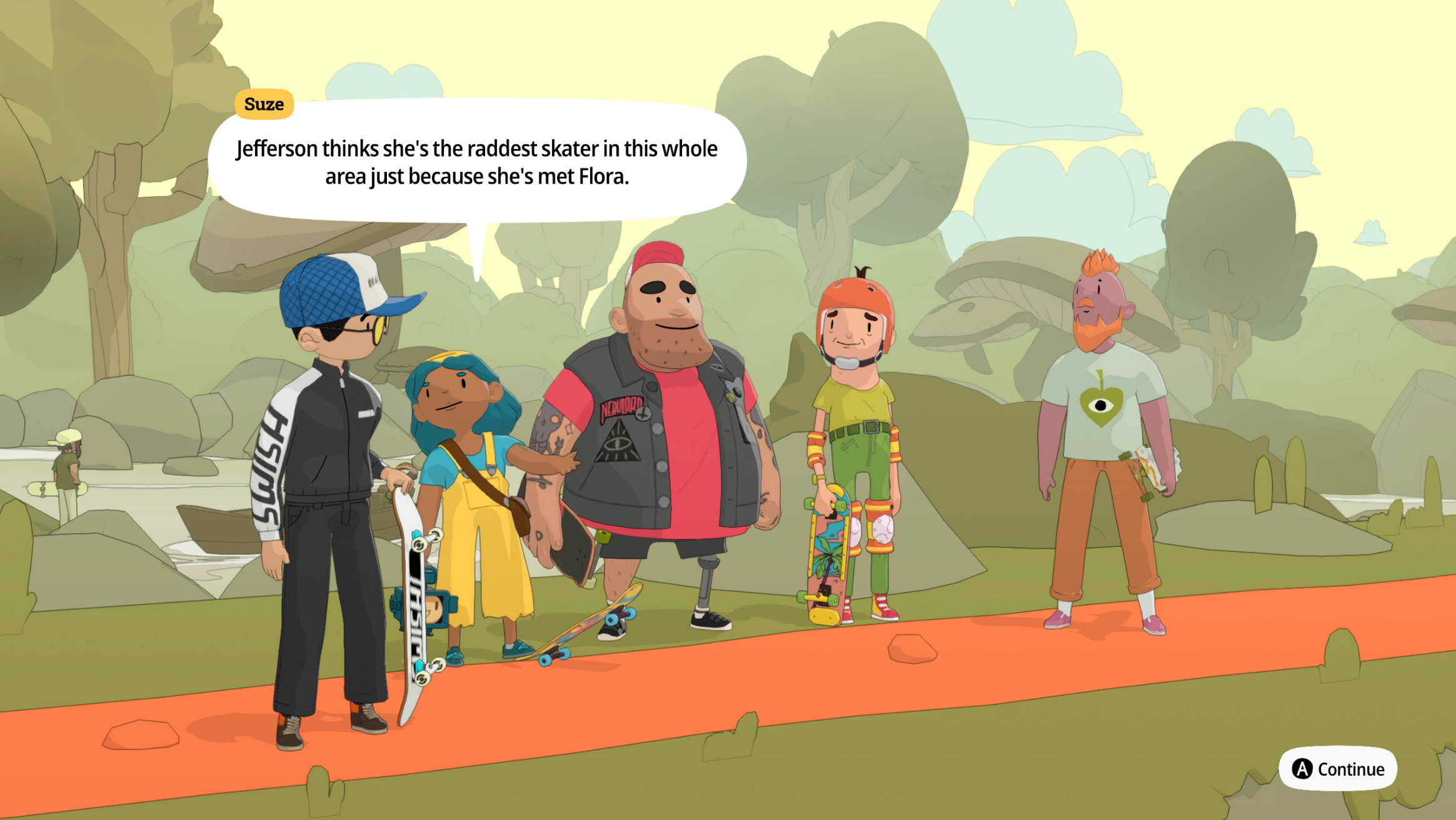 The game’s story isn’t really that engaging, in my opinion. The game’s story takes place in a place known as “Radlandia”. In it, the player is faced with several challenges as he meets a wide cast of characters. The player is tasked with platforming across several skateboarding courses as he performs grand tricks on their way to find Gnarvana.

The player character can be customized to their liking. More threads and even poses for the loading screen (which allows you to see other players’ creations) are unlocked as you complete several skateboarding challenges and achieve higher scores. If you’re the kind of player that doesn’t care about cosmetics, there isn’t much incentive beyond just completing the stages.

I have the feeling that the developers knew some players just wanted to see how far they could take their skills. This is why, after clearing World 1, you can essentially gain access to Gnarvana and start taking on other players through the game’s League system. Essentially, each Season players are issued a randomly built stage that they have to beat while achieving the highest score.

It’s important to stress how accessible this game is for everyone. You don’t need to master each and every stage to get through OlliOlli World. The later stages in the game are definite proof of that because sometimes, even trying to beat the stage without clearing any challenge is an uphill battle in and of itself.

However, outside of cosmetics, there are really not many rewards that could incentivize a player to do their best outside of being on top of the scoreboard. I like doing challenges on the stages themselves because I can unlock more tricks and cosmetics than I would on Leagues.

That doesn’t mean I don’t like the idea of trying to measure up against other players, though. While I have reached as low as 5th, I was still happy to know that I could beat several other players in the League challenges. Every challenge is also pretty short (in theory), so retrying from the beginning isn’t too punishing. Every time I failed, I was more interested in doing the stage over from the start to keep a high score. 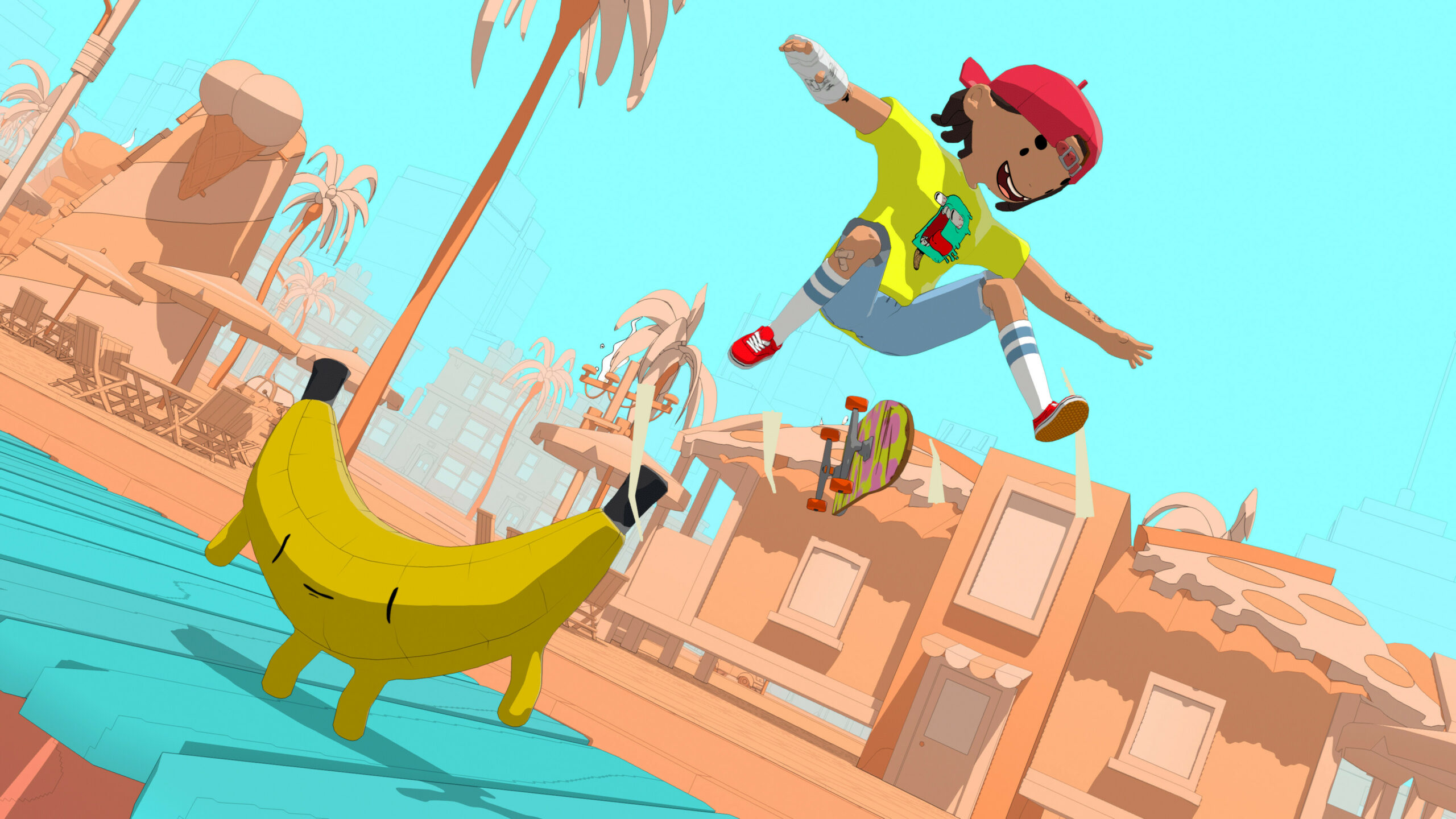 Now, this game isn’t perfect. You probably noticed that I haven’t mentioned much regarding the story. The reason behind it is because I really just tuned out of it the moment I realized the characters didn’t go beyond “Hey! Look at this location! Here’s this tidbit about this part of the stage or this character! Isn’t that interesting?”

Thankfully, you’re allowed to skip all of the dialogue sequences by the start and end of the stage. In other words, you will be able to get straight to the gameplay if the story is not your cup of tea. So, that’s not much of an inconvenience.

Another aspect of OlliOlli World I couldn’t jive with was the soundtrack. Admittedly, this is because Tony Hawk’s Pro Skater has spoiled me. But whenever I play skateboarding games, I want to play them while listening to rock music or hip hop, not this kind of lounge music that, while relaxing, is turning me out of the mood to skate and shred. I’m fully aware that this is a subjective aspect, so it isn’t a negative.

What isn’t subjective is the apparent input lag that the game suffers from. I’ve had several instances where my inputs weren’t read properly or where I tried grinding rails only for the game to fail to detect something as simple as me tilting the left stick back and forcing me to watch as my character falls off a cliff like a dope.

It is especially annoying when you consider that the game expects you to do several motion inputs to perform tricks. If the inputs themselves aren’t detected from time to time, then how do I know that the reason why I slammed my face against the wall was my own fault? What if the game failed to notice the jump input I made before slamming? I don’t know!

When the game works, it works really well. I have even managed to complete stages back to back with a full-on combo from beginning to end. When it doesn’t, you really begin to feel the frustration piling up. It turns my skateboarding adventure into an experience I don’t want to return to. But, at the very least, those lows are very infrequent and every other time I have done well going through courses. 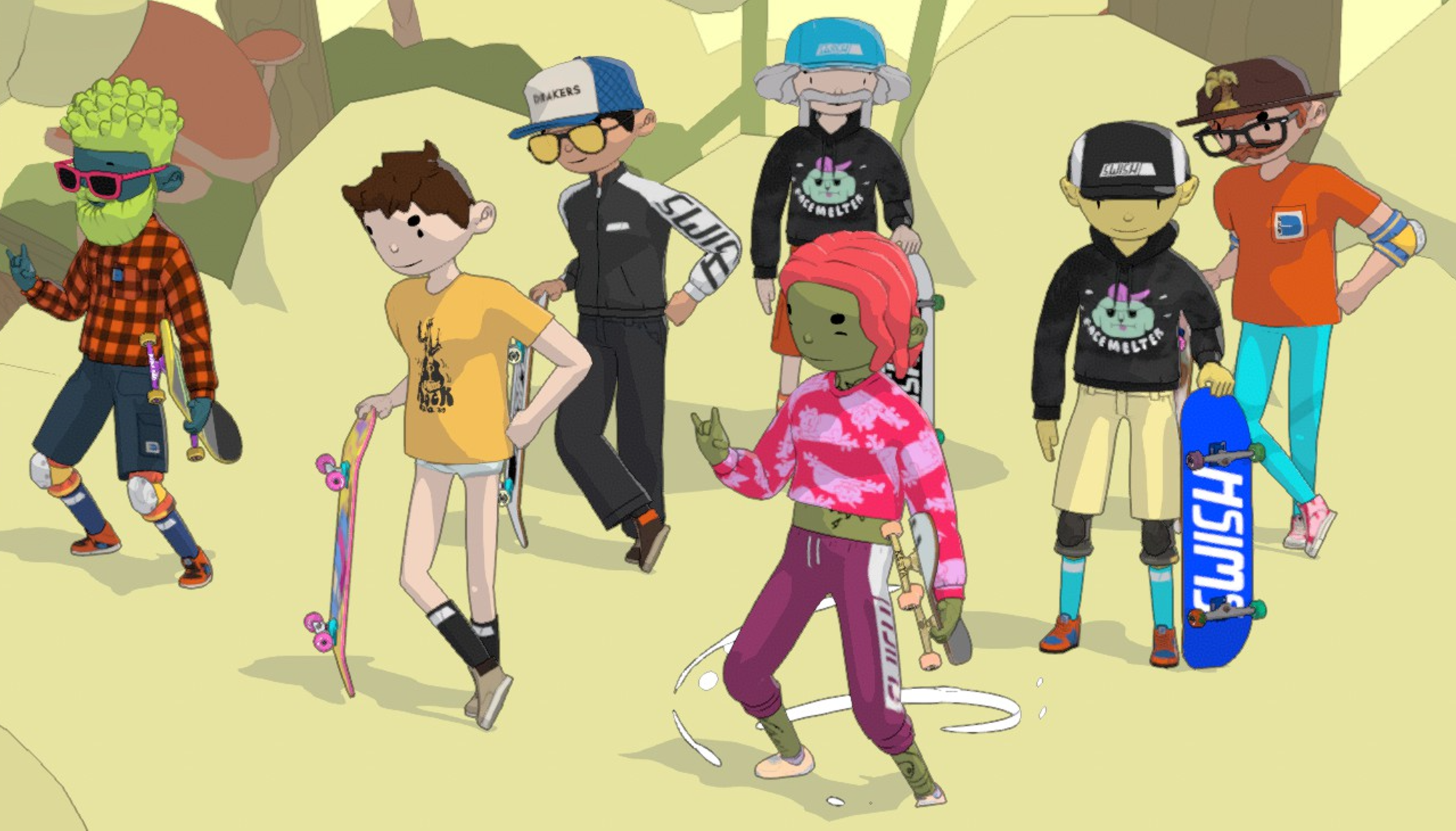 OlliOlli World is a great pastime kind of game that will be fun to pick up whenever you are looking for something chill to play. The game is welcoming to every type of player. From those who just want to get through a platforming course with no special fanfare to those who wish to challenge themselves and see how far they can take their gravity-defying tricks.

My grievances with the game can easily be patched out or fixed by myself by turning the game’s music down and listening to my own music. I know I will be coming back to this game from time to time because my skateboarding game craving has been left unattended for a while. Do I think that the game is a must-buy? At $30? Maybe not.

I’ve seen games that have been way more engaging and fun at the same price. However, this game fills a very specific niche that I’m sure those other titles won’t be able to, regardless of quality. So, if you think that this game is for you, I’d say give it a shot. OlliOlli World’s idea of fun is that everything is allowed so long as you stay on your board. So, I will stay on mine for a bit longer. See you in the Gnarvana.

OlliOlli World has a chill vibe that allows players to enjoy performing skating tricks, whether to clear platforming challenges or just to challenge themselves to the highest score. The game offers little else besides cosmetic rewards, but it more than makes up for it with its replayability and addictive nature. It's the perfect game for those who want to play a game with the same level of depth as the Tony Hawk or Skate franchises.