Super Meat Boy was occasionally frustrating, because you could see the goal but struggled to reach it. It required lightning-fast reflexes and precision control and an understanding of all of the game's chaotic systems. Super Meat Boy Forever is frustrating because a lot of the time you don’t know what you’re doing.

Super Meat Boy was a game of its age that genuinely changed the gaming landscape and the mainstream audience’s precision of indie titles. It was slick, precise, and incredibly popular in the era where indie games were just starting to receive such attention. But its Newgrounds humour has aged, and Forever does very little to update itself for a new audience. In fact, it feels like Super Meat Boy Forever is purposefully positioned in opposition to its predecessor's success. It might look just as slick, have an impressively varied soundtrack, and capture the same catchy, arcade feel and design, but it is discordant to everything Super Meat Boy tried to achieve.

To start with, Forever is an endless runner, a genre that was only ever popular briefly and that was around the same time the first Super Meat Boy came out. Why, after so many years sitting on the Super Meat Boy IP would they decide to make an endless runner when games like Celeste, Spelunky, and Ori have continued to highlight the demand for 2D platformers? Thanks to your inability to stop, Forever feels ungainly and awkward as you make rookie mistakes because you don’t have control over your own momentum. Forever makes you long for the days where you took take a breath and adjust your grip before attempt another run, but at least there are still plenty of platformers that allow you to do that.

The controls are just as precise as well. The jumps are beautifully weighty and responsive, but it doesn’t feel that way when you’re hurtling through the level and into various traps. This is especially true, and especially annoying, when you’re bouncing off walls and changing direction. When you hit a wall in Forever you can go back the way you came by jumping off it. You can’t use the direction keys or anything else, you have to jump. This can be frustrating when there is a head high trap, but it seems like these were put in place to intentionally aggravate you and up your kill count as you have to attempt to leave the wall a thousand times.

When you’re not bouncing off the same wall, you’ll be sprinting through extensive, interweaving puzzles. These are the kind of the thing that would be great to unpick as you take on the high staking platforming, but alas you’re forced to run through them without learning what you’re meant to be doing. Checkpoints push you back to the start of each section and a lot of the time you won’t be sure if what you attempted to do was the right solution. More than once I found myself wondering if I had somehow broken the game by taking some other route, but there is no way of finding out. Each world brings a host of new mechanics that are introduced well enough for what the game is, but as the puzzles and challenges expand, you’re often left confused and unsatisfied with what you have done to overcome them. Likewise, the original Super Meat Boy had hundreds of secrets stashed away in the form of collectibles and portals. They still exist in Forever, but now you might not even see them as you aren’t given permission to slow down and look.

Where Super Meat Boy Forever reaches its climatic frustration is with boss fights. Each world has its own boss and none of them are fun to overcome. Super Meat Boy has challenging bosses that demanded you perfect the skills you had learned in their respective worlds. You would have to memorise their attacks and route and systematically learn them all until they can be overcome them in one flawless run. This is not the case in Forever, where changing attacks, the persistently annoying endlessly running and oversimplified controls make each attempt a new and unenjoyable disaster. The first boss will have you trying to avoid chainsaws with the same button that has to attack. The second will force you to aim pixel-perfect at a floating brain. The third will have you playing the worst game of football in your life. It just keeps going on and getting worse.

But despite this, despite all the exasperated sighs and daydreams about destroying my computer, I did keep playing. I found myself unable to quit the frustrating levels until I completed them. I was not enjoying myself, but I was unable to stop. If that is what the developers wanted to achieve, and what the players want to experience, then they have done a great job. Otherwise, Super Meat Boy Forever is a bad game. 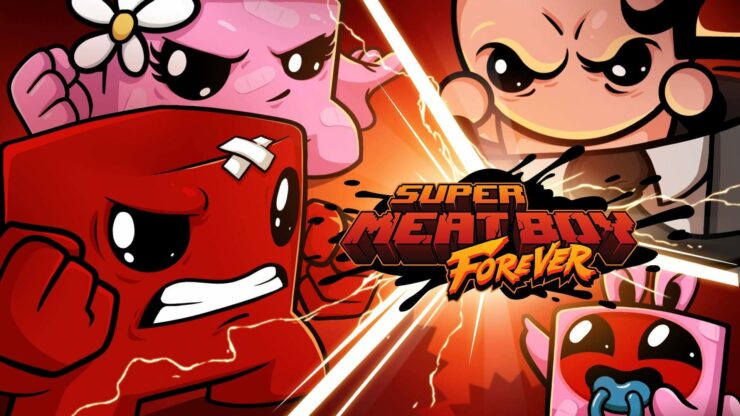 Despite its appeal to nostalgia and the phenomenal success of the first game, Super Meat Boy Forever fails to deliver its promises and ends up undermining the IP and design of the game it's based upon.