There aren’t a lot of online multiplayer options for folks who aren’t interested in shooters, fighters, or real-time strategy clickfests. What if you’re more into the thoughtful side of gaming? Just because you’d rather be unraveling a tricky Zelda dungeon or old-school adventure game than scoring headshots doesn’t mean you’re not competitive!

Murderous Pursuits was seemingly created with these more laid-back gamers in mind. Described as a “multiplayer stealth-em-up” by its developers, this is a game that’s more about deception and close observation than twitch action. Does Murderous Pursuits prove low-key online multiplayer experiences can work or is it a deathly bore? 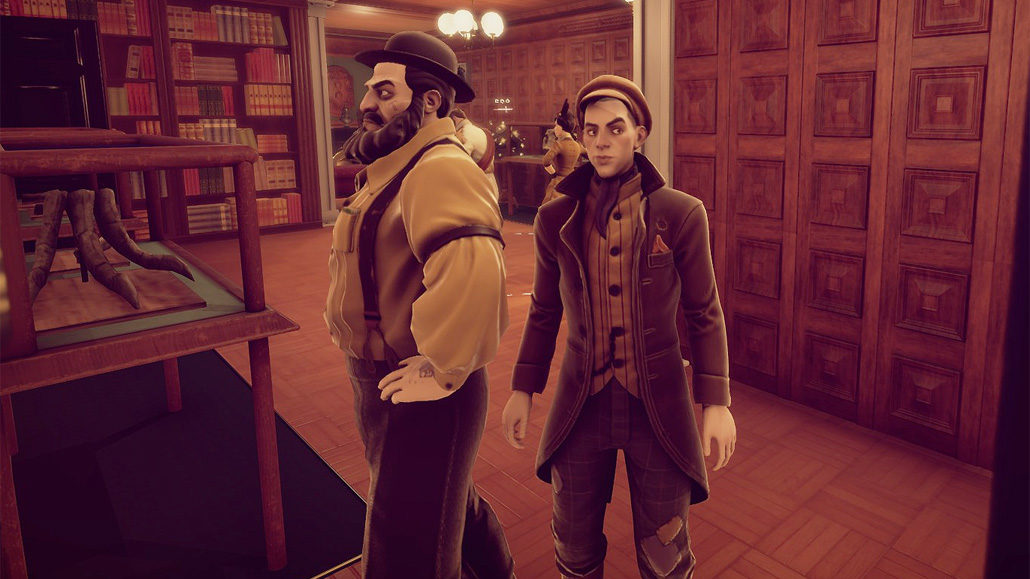 Murderous Pursuits takes place on a Victorian airship presided over by Mr. X, a mysterious villain who gets off on his party guests stabbing each other to death. Oh, also, the airship is a time machine, which is currently on a sightseeing tour of the Jurassic period. Not that it matters -- Murderous Pursuits’ thin sliver of story exists purely to provide a bit of color and set the proper wacky old-timey scene. The game’s visuals aren't terribly impressive on a technical level, but the game has a good sense of style and its characters are well-animated. On the audio front, the “stodgy British mystery series” music and velvety pipes of Mr. X set the tone nicely.

Murderous Pursuits has eight character types, with each match being populated by multiple clones. This is intentional, as the game is all about getting lost in the crowd. Once you choose your character and join the party, you’ll be assigned a Quarry you have to track down and kill – do so successfully and you’ll be awarded Favor Points depending on what weapon you used and how stylishly you offed them. The player with the most points when the time limit expires wins. Of course, as you’re stalking your prey, others ne’er-do-wells will be coming after you. 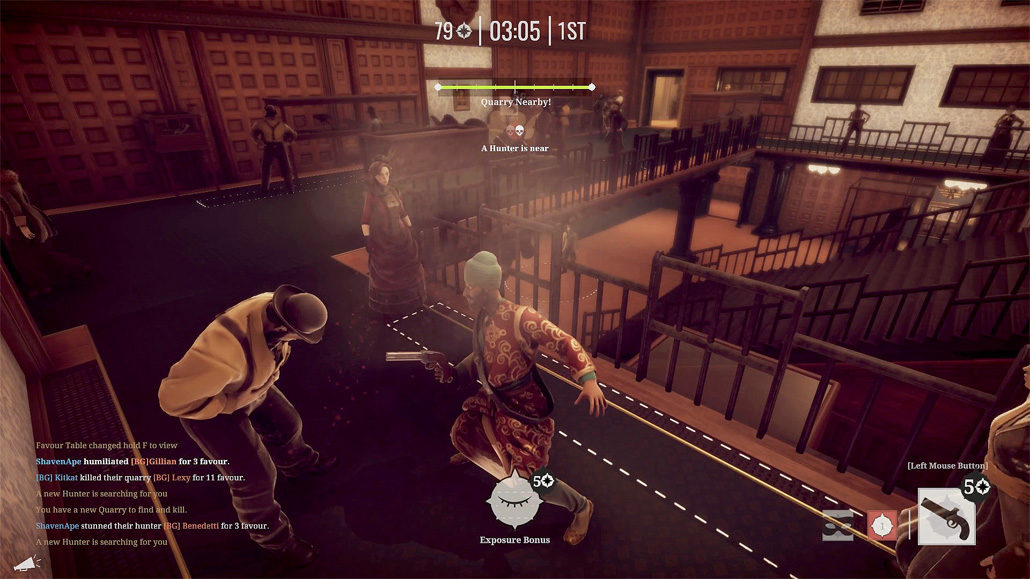 You have a Quarry Tracker which will lead you to your victim, but brazenly beelining directly for them with bloodlust in your eyes probably won’t work out well for you. Your compass will put you in the general vicinity of your Quarry but doesn’t place any sort of mark on them, and there may be a half-dozen-plus human-controlled and AI characters milling about the area. Identifying the right victim requires you to pay close attention to the crowd, and there are consequences for choosing incorrectly.

Shank the wrong person and you’ll be “exposed,” which marks you with a big green target, making you easy prey for the players tracking you. Your Quarry can also strike first if they see you coming, stunning you and resetting your target. Needless to say, mistakenly shooting the person right next to your intended victim tends to be a pretty big tip off.

The only way to remove your exposed status is to spend some time in a “Vignette,” which are designated spots on the map where your character will automatically blend in. These take various forms – you can, amongst many other things, warm your hands around a flaming barrel, stop to admire a piece of art, or tinker with some old-fashioned test tubes. You can also be exposed simply by spending too much time outside of these Vignette zones, so mingling is a must. 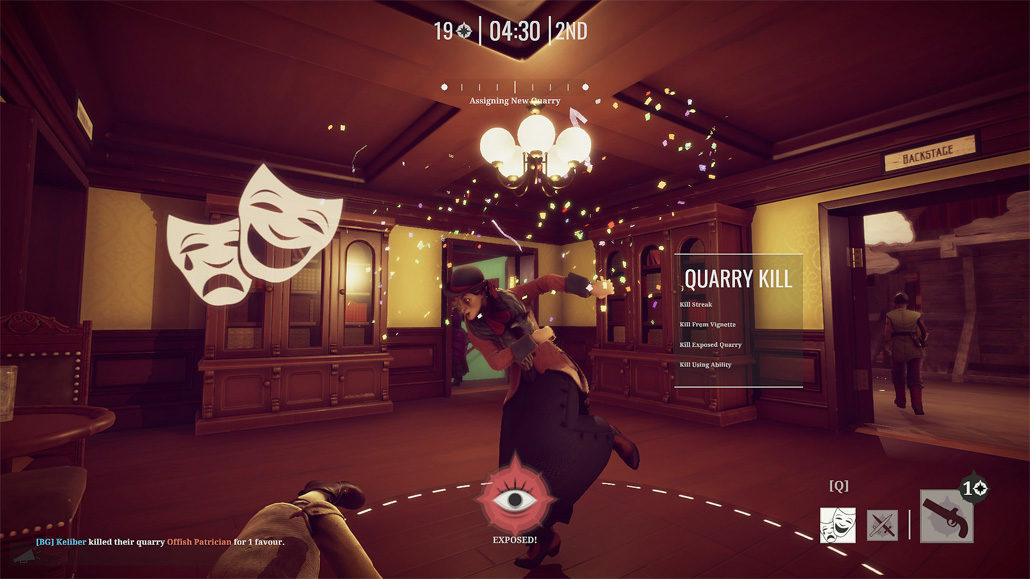 Track your Quarry, avoid being exposed, and keep an eye out for any jerks hunting you – it’s a pretty simple setup, although there are a couple additional twists. There are guards who patrol the map and will expose you if your attack anybody in front of them. You also get to choose two special powers, from a list of five total, before each match. These include Disguise (transform into another character), Reveal (expose any nearby targets or enemies), Humiliate (taunt your victim’s corpse for extra points), Flash (stun everybody in the vicinity), and Counter (automatically attack your foe before they attack you).

On a basic level, Murderous Pursuits absolutely works. There’s something darkly satisfying about successfully sneaking up on your mark undetected. There’s also some room for strategizing -- will you aggressively track down your prey or chill out and wait for them to come to you? That said, the game isn’t without issues. Targeting is a problem, especially in crowds, which is frustrating given the harsh penalty the game metes out for attacking the wrong person. The powers are also rather unbalanced – Reveal and Counter are the only ones you really need, while Disguise and Humiliate can be safely ignored. 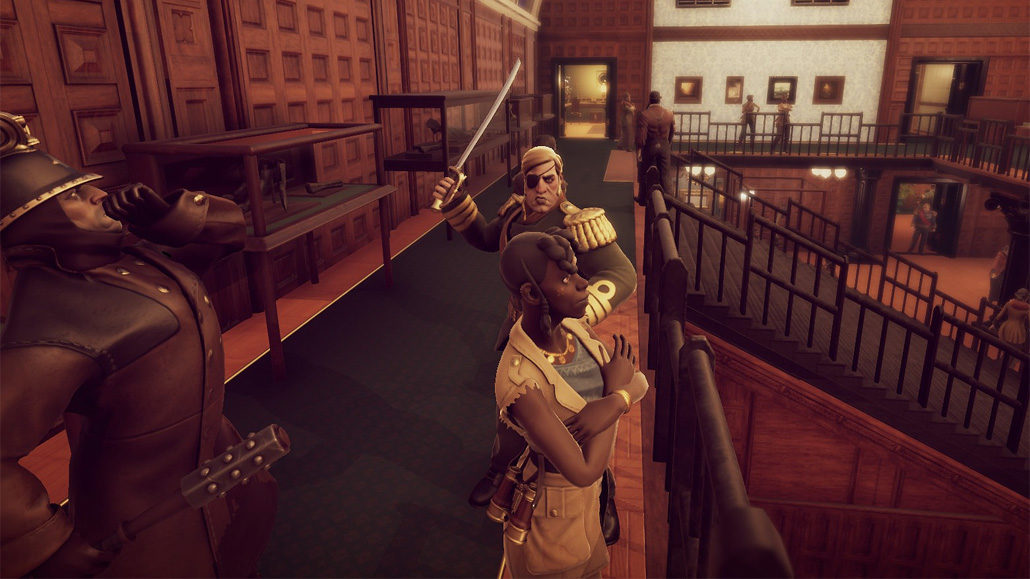 I would also be remiss if I didn’t mention how often the game crashed or froze on me. Thankfully, I rarely dropped out in the middle of the action or lost any progress, as crashes tended to happen when loading between games, but it was rare to get through more than 30 or 40 minutes without having to restart.

Then there’s the question of value – Murderous Pursuits is certainly enjoyable, but it’s also very simple and begins to feel repetitive rather quickly. This is exacerbated by the fact the game has only four maps. Given how thin the game is, Murderous Pursuits’ $20 asking price is a bit of a mood killer.

This review was based on a PC copy of Murderous Pursuits provided by publisher Blazing Griffin. You can purchase the game via Fanatical.

Murderous Pursuits is an entertaining, inventive, and accessible online multiplayer experience hobbled by its technical issues, stingy amount of content, and lack of polish. The game’s developers are promising to brush up and expand the game over the coming months, but will it ever reach its full potential? Only time will tell. There’s fun to be had at this murder party, but you’re probably best showing up fashionably late.