Milestone's MotoGP series of games has a problem. This is a problem that has never been highlighted better than here in MotoGP 17. It's also potentially the last year the series will have this one major issue. The issue being stagnation. Back in my RIDE 2 review, I commented on how the folks at Milestone were moving forward and not stagnating. While this is true for the company's flagship series, the same can't be said here.

The core problem comes from the fact that only minor improvements are made on what is an aging engine. Last year Milestone took time off from the series, developing Valentino Rossi: The Game instead and sadly MotoGP 17 doesn't feel much different to MotoGP 15.

Rather, what should be said is that there are aspects that haven't improved in two years. While it's good that the game is more than capable of running at a high framerate with no hiccups, this is a result of a huge compromise. Visually, little has changed since the 2015 iteration. While the bikes and certain areas of tracks have an improved level of detail, there are issues. The colors, bar rides, feel washed out. The background and areas just beyond the track lack any real detail. While it's true that you don't need to put too much focus into it, it's too noticeable when embankments are flat green-brown areas with the occasional ill-detailed shrub.

While there have been a large number of casualties with games going to the realistic, this is one title that could have done with the more realistic color scheme and an attention to detail. Part of the problem is that Milestone haven't gone with Unreal Engine 4 as with MXGP3.

What Milestone have made good use of is the license with Dorna Sports, the rights holder of MotoGP. Multiple real life sponsors for MotoGP now feature here in the game at both tracks and on rider and bike liveries. Working with Dorna has also allowed Milestone to record bikes on the tracks and use these recordings to make MotoGP 17 the best sounding game in the series. While it's not ideal, still somewhat computerized, it's a huge step in the right direction.

This increased partnership with Dorna Sports has extended beyond the liveries of major teams and riders. Added to the game are in-race graphics identical to those of the sport itself. In addition, video vignettes of the location of a particular Grand Prix's location that mimic those given before a real event. It all adds to a level of authenticity that the series has lacked in the past.

Adding to this authenticity are the physics. Although they aren't to a great level yet, they have improved hugely from the previous iteration. Now your lines on the track have a greater impact. Hitting the rumble strip at any level of speed will throw your front end up in the air. Attempting to turn on the throttle too early when cornering will knock your balance out.

What has worked great is the attention to detail that has gone into the bikes. Each and every bike sounds, feels and rides differently. You can always feel the difference between a Yamaha, Honda, and Ducati. Even at lower levels, racing your Mahindra will feel dramatically different to later on racing your Yamaha. Discounting the speed difference, the way each bike handles the track is immediately noticeable.

It's also great to see riders leaning in different styles. It is, however, a shame when every rider seems to have the exact same height and weight. Small things like this are able to take you out of the game somewhat. What really can, though, are when the physics really mess up. In-race collisions that would send a rider flying off their bike in real life offer no major hindrance here.

This is particularly egregious when you take the AI into account. While it has been improved from the previous game, it's still at a level that leaves much to want. Bar exceptional circumstances, the riders are adamant on taking that one particular ideal line. This will happen even to their own detriment, for example running right into the back of a bike and slowing themselves down.

One of the few great aspects of MotoGP 17 are the enhanced career modes. You have the ability to simply take on the role of a single rider, advancing up from the rookies all the way to the top. There is also the chance to lead, and ride, for your very own time. Choosing a bike, a sponsor and activities to take in between each Grand Prix. It can get somewhat repetitive, but at the same time, it's engrossing. Particularly later on when your time is riding in all three levels. You have to manage up to five different riders and their crew, side staff and what upgrades to make on your bikes.

What is perplexing is how trimmed down MotoGP is. While it offers more than the 2015 iteration, it lacks from last year. Valentino Rossi: The Game was effectively MotoGP 16 in all but name. It included the 2016 Grand Prix in totality and a career mode, of sorts. The exclusion of rally and flat tracks from last year’s outing is perplexing to say the least, only adding to the feeling that MotoGP 17 is a stripped back release.

Possibly the most interesting aspect of MotoGP 17 is multiplayer. It doesn't offer anything particularly different or exciting at this moment in time, but there are plans for the future. Dorna Sports have gone to Milestone with plans of turning the series into a true eSports title. The game will feature an official MotoGP eSports championship, managed by Dorna Sports themselves.

On another, random note, the game has a few bugs. Bikes showing flexibility that an olympic gymnast would be envious of. Sometimes the video prior to a grand prix will be a purely black screen and all you can do is keep clicking until the race starts. Manager career has issues with objectives, credit requirements and other things going what can only be described as "out of whack". This is, sadly, par for the course with a Milestone release. Thankfully, the company does have a history of fixing issues once reported.

MotoGP 17 has too many limitations. Being restricted to the old in-house engine and not making the move to Unreal was a result of time constraints. However, the old in-house engine shows the same problems it has for years now. There's little doubt that with only minor improvements in visual fidelity and audio, combined with repetitive gameplay due to an improved but still lacking AI, it's difficult to give much praise to the game.

If you want a more complete two-wheeled racing experience, Milestone did better with Ride 2. Possibly the major saving grace is the career mode. I've no doubt that with the move to Unreal, MotoGP 18 will be an improvement. Until then, this can only be described as a stopgap at best.

PC version reviewed. Copy provided by publisher. You can buy the game for PlayStation 4 or Xbox One via Amazon. 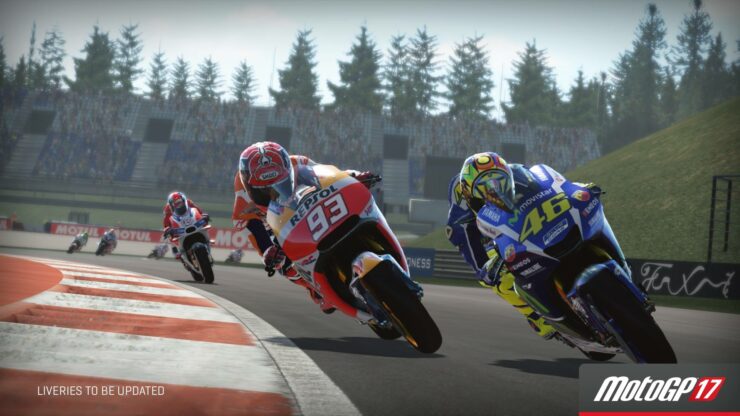 At best, MotoGP 17 can be described as a stopgap. With only minor at best improvements, the game leaves a lot of areas lacking. The major feature is a new career mode which is engrossing as you work your team up through the ranks. Sadly, the game does have plenty of bugs and technical issues, as is the norm for Milestone games at release.