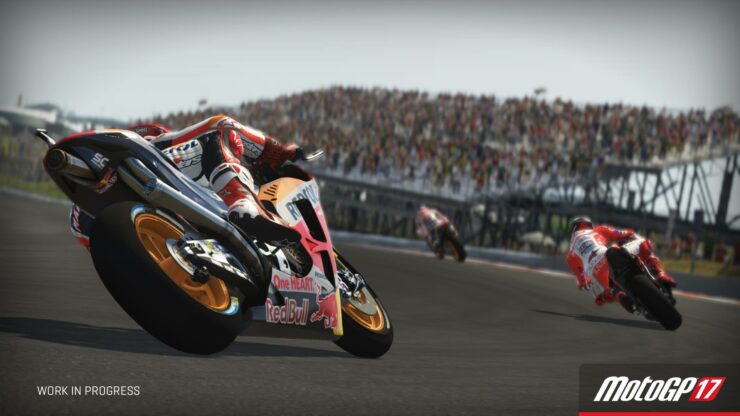 The struggle for the MotoGP Championship between top bikers like Maverick Viñales, Marc Marquez and Valentino Rossi is just heating up and Milestone, the historical Italian development studio with a penchant for racing games, is about to launch MotoGP 17 on PC, PlayStation 4 and Xbox One with a release date set for June 15th.

By the looks of it, this is no mere yearly rehash. All platforms will run at 60FPS, for starters; there's a new managerial career mode, too, though perhaps the biggest new feature is the brand new eSports Championship organized in collaboration with Dorna exclusively for PlayStation 4.

We've talked with Marketing Manager Andrea Loiudice and Lead Programmer Michele Caletti to recover more information on the game's development and features ahead of the release.

What are the main improvements you're bringing to fans with MotoGP 17? Is there anything you're porting over from Ride 2 in terms of gameplay?

MICHELE CALETTI: Our engine, in terms of graphics and physics, is always evolving. Despite being the last game we'll make with it, we've ported all the gameplay improvements from Ride 2 - particularly those praised for making the game more realistic - and we've added a lot more, making the AI more aggressive and further improving physics and collision system. The 60FPS support for PS4, PS4 Pro and Xbox One now brings to console players what PC ones have been enjoying - smooth, and more detailed physics, fast reactions and an increased feeling of being there. The audio is also a notable improvement - we've been able to re-record all the real bikes and to reproduce their sound in the game with a new third-party system that allows some incredibly realistic results.

ANDREA LOIUDICE: We’ve also packed up a lot of new contents in this game. For the first time in a MotoGP game that we’ll have a Team Manager Mode that will allow players to face an entire career as a rider and a team manager, experiencing the whole universe of the MotoGP and being able to take all the decisions that actually can bring you to the victory every weekend. We've also made exciting changes to the online mode. MotoGP 17 will include a co-op online mode to face a sprint season teaming up with a friend and above all the great news is we’re running the first official eSports MotoGP championship, completely driven and managed by Dorna itself. This is a multi-year plan and MotoGP 17 marks just the first step in the direction both we and Dorna have in mind. In a few years, we think it can become a reference point in the racing eSports segment.

Will there be dynamic weather?

MICHELE CALETTI: Given the relatively short races - the maximum, just as in reality, is around 25 laps depending on the track length - and the realistic take on the sport, we have several weather conditions. Amongst them, there's a variable one called "light rain". This means rain might start to fall, get denser, then stop, and then start again. As a result, the track surface will get wet or dry with time.

More extreme situations have not been implemented because besides being quite demanding for the machines, are not fitting the sport itself. In real MotoGP, if a heavy storm hits the track all of a sudden, the race would likely be red-flagged.

Did you add Ride Through penalties to the game?

MICHELE CALETTI: No, in fact, we actually removed them, because the time penalty we've got right now we felt was punishing enough, and players would likely rewind action or restart a race to avoid penalties at all.

Is online multiplayer still based on the Peer-to-Peer model rather than dedicated servers?

MICHELE CALETTI: This year it will still be peer to peer. It's a technology that's got some pro and cons, of course. With peer to peer it's impossible to run into those ‘day one’ issues that have affected so many titles, even some famous ones, for example. MotoGP17 doesn't have or need some complex persistent world like MMORPGs, so the technology we use is a good trade off for what we do right now.

Why did you stick with your engine with MotoGP 17 while MXGP3 is powered by Unreal Engine 4?

ANDREA LOIUDICE: It was partly a question of timing and partly a question of what would work best for each game at this stage. So, we’re obviously excited to be moving across to Unreal Engine 4 in the future and we’ve been working with Epic Games to tailor the engine for racing - that’s something we think gamers are going to love both with MXGP3 and Gravel next year. However, work on MotoGP 17 has been running a touch longer, and so it was decided the best experience right now would be to give our own engine a final sign off - and we think it’s one hell of a sign off. Our engine has been created specifically for MotoGP franchise and we know it so well that we’ve been able to deliver 60FPS across all formats, which is improving so much the gaming experience in a racing game like this. In short, we can’t wait to get to grips with Unreal in the years ahead, but MotoGP 17 is going to be an epic last stand for our own technology.

Was it hard to ensure that the game would run at 60FPS on all platforms? Is the framerate locked or unlocked for 60+FPS gameplay on PC?

MICHELE CALETTI: Yes, it's been complex because, as I was saying, having more than 30 bikes on screen is extremely demanding. Nonetheless, we've been able to get very good results on all platforms, and with basically no visual tradeoff. We didn't cut textures or polycount, it's all there, just smoother. The bulk of our work has been to optimize some areas of the engine, maximizing CPU and GPU usage.

On consoles, frame rate is not locked, because in some situations, say like massive crashes, the platforms offer some brilliant supports to minimize issues. Locking frame rate would just default on the "worst case", unlocked frame rate instead is used by all racing titles because it allows to get the best in all conditions. PC will offer unlocked or locked frame rate - it’ll be down to the player.

What kind of improvements did you prepare for Sony's PlayStation 4 Pro console when compared to the basic PS4? Will there be support for HDR displays for PS4, XB1 and/or PC?

MICHELE CALETTI:  We've worked to support PS4 Pro, in terms of higher resolution, and basic HDR support, but we're still working to improve after day one, with a more detailed HDR, in order to jump from it being just ‘better on PS4 Pro’ to being ‘way better on PS4 Pro’.

Can you provide more info on the higher resolution you're adopting on PS4 Pro and whether HDTV users will enjoy a downsampling effect?

On PS4 Pro the game runs at 2560 X 1440, with even more stable 60fps.
We don't apply downsampling on HD TV on PS4 Pro, but we're planning to update the HDR support quite soon and to improve graphics detail too.

Are you looking at the Switch for future titles? What do you think of Nintendo's latest console?

ANDREA LOIUDICE: We always have our eye on new tech and Switch is an interesting prospect and it certainly offers something different to existing systems. We don’t have anything to announce right now, but we’re certainly looking into how our IPs might work on Switch and what we could do creatively with the tools in our arsenal that would make the most of the console.