While Forza and Need for Speed have been tearing up the asphalt streets, some might say the muddy arenas of motocross have been often overlooked. There haven’t been as many titles focused on the dirt and mud with Rainbow Studios, of MX vs ATV fame, being silent the past couple of years. In that time span, the studio responsible for WRC and Ride has quietly made a name for themselves developing the official motocross game with their latest installment, MXGP3, soon to hit store shelves in North America. As the newest title in the MXGP series, MXGP3 once again returns with a laser focus on the motocross discipline.

When you ride in the MXGP, you do it for the team. That much stays true in MXGP3’s career mode, where different teams and sponsorships are available to give the player a fresh start. Modeled after real world motocross teams, each offers a team jersey and official bike to get the player started with additional challenges to help earn a few extra credits. The challenges rarely deviate from beating a specific player on the leaderboards or finishing a Grand Prix with a certain number of points. It’s a little thin in terms of content, but it’s just a small incentive to keep pushing the player into the number one position. 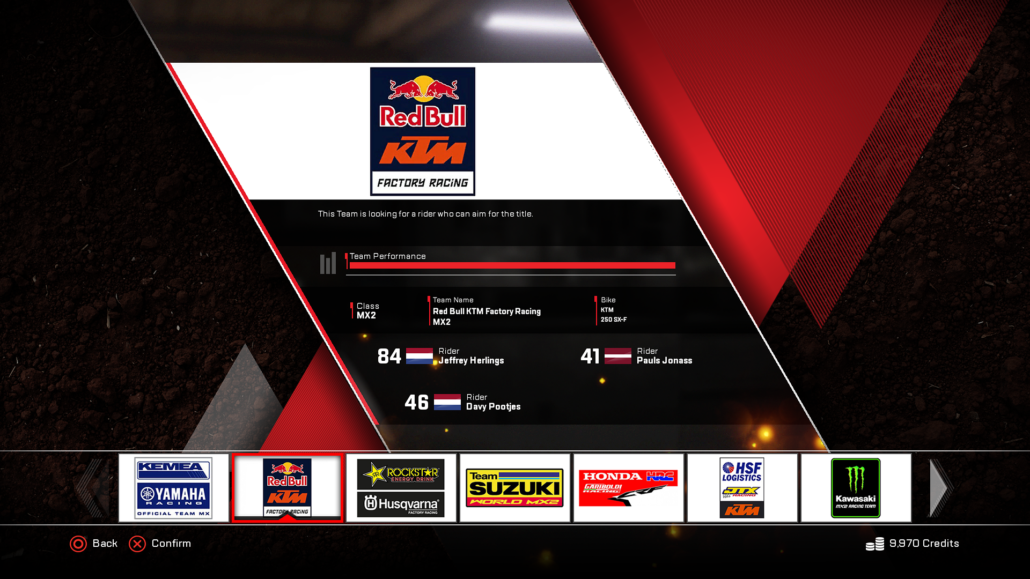 In addition to the standard career offering, MXGP3 offers the full selection of tracks and weather conditions for both AI matches as well as online championships and Grand Prix (which also feature AI riders if you need to fill out the twelve-player roster). If you’re feeling like playing something more realistic, the Monster Energy FIM MXoN lets players take control of real life MX riders from over twenty countries to compete with their chosen bikes in a three-race championship. If you’re a trophy hunter, it’s worth tackling this mode with the France team for a quick and easy achievement.

Motocross is not a clean sport; it’s not something you can wear your Sunday’s best to and hope to make it out in pristine condition. It’s about that feeling of sticking your tires into the wet earth and cutting your own path along the track. Throughout the race, new lines are continuously cut into the track as players ride and cut corners at forty kilometers per hour. If you’re sitting towards the rear of the pack, this can often be a benefit to help gain a little extra momentum by taking someone else’s rut but can also work against you if you’re not expecting it. I have a tendency of cutting corners a little too sharply in MXGP3 and have lost a number of leader positions by slipping into someone else’s line during a turn and flipping my bike after losing balance.

Thankfully, the Rewind function makes its return from last year’s MXGP2. Similar to how it functions in Forza and other racing titles that offer a Rewind function, players can rewind up to the last twenty or so seconds of a race and seamlessly make adjustments if they suddenly crash or lose too much momentum heading out of a turn. I was no stranger to taking advantage of that feature on tracks that feature back-to-back turns and my bike just couldn’t handle the way I wanted it to. It’s certainly not a required function, and pro players may opt to simply turn the entire feature off before a race and earn a little extra credit for doing so.

Cash is a very quickly expendable resource in the racing world of MXGP3 and you’ll often be blowing it all on the next essential upgrade to, in turn, place a little higher in the next race and earn more money. When it comes down to picking out new parts, or a new bike entirely, there really isn’t much reason to choose one manufacturer over another. With dozens of real world brands and a wide roster of motocross bike manufacturers, you would think that there would be plenty of choices to work with. Unfortunately, that choice is usually limited to cosmetic appeal or brand loyalty.

Picking out a new exhaust pipe (singlehandedly the best investment if you want to improve your track times) comes at the choice of ten different manufacturers that all produce exhausts with the same stats. The 4,000 credit tier of upgrades all give the same acceleration and top speed increases, so it’s up to the player to decide which part will best accent their backend. The same goes for every other upgrade part, where different manufacturers all give the same statistical increase. This reminds me a bit of the NASCAR line of games, where every driver is somewhat forced into specific rides that offer little diversity beyond the looks. 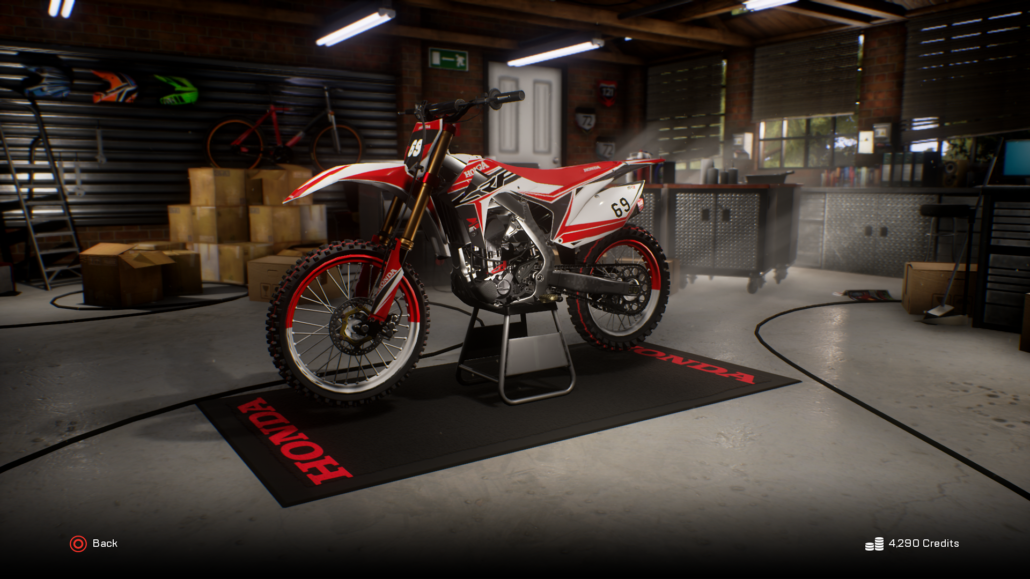 On the bright side, the bikes themselves offer different statistical advantages of their own. Priced at 10,000 credits a piece (the equivalent of about three first-place finishes), consider the bike to be a luxury upgrade rather than something essential. Most teams you sign with will offer a custom-tuned motocross bike to ride with, full kitted with advertisements and sponsorship logos for their given brand. That being said, if you’re serious about riding in the MXGP 450cc class, there’s no shame in picking out the KTM 450 SX-F as it offers the highest starting acceleration and speed in its class.

As a racing fan, I typically ascribe to the Need for Speed or Forza style of racing titles, something where speeds far exceed what my car in the garage can handle while still requiring a small amount of finesse to control. MXGP3 was a bit of a challenge to first get the hang of, as I would routinely try and gun my way through every turn and jump on the track. That school of thought needs to be immediately eliminated if you have any chance of winning an MXGP championship. It’s not just about learning when to let off the gas or hit the clutch to rev up the engine in a tight turn and the control can go much deeper if the player takes the time to learn the intricacies of motocross.

The rider’s weight also plays a major part in bike control and it’s a delicate dance of turning the bike with the left analog stick while readjusting the rider with the right. It took about half a season of races for my fingers to naturally adjust to the slower, more balance focused pace of motocross racing. And sure, I still crash in at least one spectacular fashion every race, usually by hitting a corner too sharply and falling into a rut another racer left in the mud, but I’m learning and can appreciate the MXGP series for what they’re trying to accomplish. 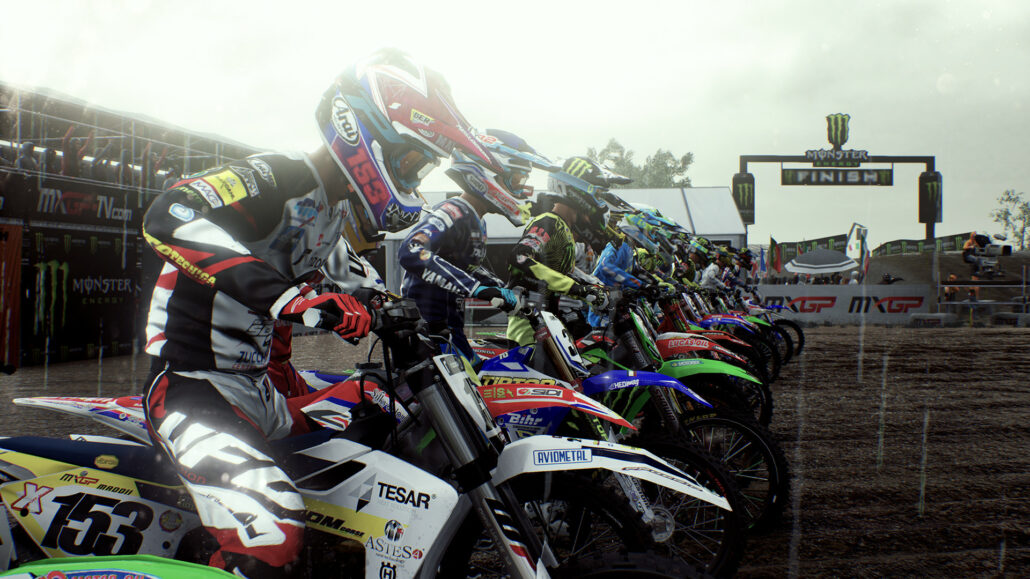 Unique to the motocross genre, the tracks themselves each have their own bit of personality and can change dynamically as a race goes on. It may not be as noticeable in a three-lap race versus a fifteen-lap, but every rider leaves their mark on the course with each turn and straightaway. These lines will dynamically affect performance as the player rides, and deeper lines cutting through a sharp turn can easily send the rider off balance if they’re not paying attention. Weather plays another important factor in how races handle, with rainy conditions contributing to a muddy track and can quickly turn any sharp corner into a slippery mess.

MXGP3 is dedicated to the discipline of motocross riders that want a gaming experience that’s  true to the sport. Its slower pace and focus on real physics may turn off players that just want to get a little dirty and race around the track, but taking the time to learn the ins and outs of handling a 450cc bike becomes an experience unlike any other. With a bit more polish and deeper customization to each bike, MXGP3 could branch out and appeal to a wider audience. But for those that know how to get the holeshot every time, MXGP3 stands to be the best motocross title in recent years.

Reviewed on PlayStation 4 (code provided by the publisher). You can buy the game for PC (digital), PlayStation 4 or Xbox One via Amazon - just select the preferred platform via the dropdown menu.

With its focus on being true to the motocross sport, MXGP3 offers a surprising amount of depth to its control and riding finesse. While it may not have much to offer to bring in new fans, those that enjoy riding a 250cc bike in the mud will certainly appreciate the best entry in the series to date.