There’s been no shortage of digital Lovecraft adaptations lately, although you could argue it’s been a case of creepy quantity over quality. Don’t get me wrong, recent games like Call of Cthulhu and The Sinking City have their dark charms and chilling moments, but they ultimately fall maddeningly short of true greatness. Enter Moons of Madness, our latest weird-horror-infused adventure, which brings the tentacles, tortured minds, and twisted realities to the surface of Mars.

A mashup of Lovecraft and The Martian is certainly an intriguing concept, but is Moons of Madness the truly-gripping trip fans have been waiting for? Or is the game as lifeless as the red planet itself? Strap yourself in, it’s time to put this one to the test…

Moons of Madness casts players as Shane Newehart, an engineer engaged in a secret mission on Mars on behalf of the shadowy Orochi Corporation. We're never clearly told what exactly this mission is, but that’s neither here nor there – what matters is that it’s not going well. Everyone is being haunted by disturbing dreams, sightings of a mysterious being known as “The Witch” are on the rise, the base is falling apart, and certain crew members have isolated themselves as they work on mysterious projects. You’d think everyone on Mars would be rather freaked out at this point, and yet Moons of Madness maintains an oddly jovial tone in its early hours.

While Shane rarely interacts with anybody in person, he’s constantly joking around and trading insults with other members of his team over the radio. Even when shit really starts to go down, Shane more or less just rolls with the punches. Some shambling slime-covered monstrosity will jump out at him, and he’ll be temporarily startled, but minutes later he’ll be back to calmly solving puzzles and busting his coworkers’ balls.

The tone takes a while to get used to, but...I didn’t hate it. Often Lovecraft games go a bit overboard with the misery and gloom, and I’m kind of glad the game didn’t portray Shane as mentally unstable or particularly damaged (I honestly don’t need to play another game with a “sanity meter” ever again). Moons of Madness does do some nice little things to show Shane is unraveling as its story progresses – his hands begin to shake as he tries to operate certain instruments and he fumbles to open doors – but it doesn’t hit you over the head. Shane is just a regular Joe space engineer who gets plunged into some very freaky stuff, which arguably makes for a more relatable, absorbing story. Although maybe I’m just tired of playing Lovecraft games starring drunken detectives.

Moons of Madness sticks fairly closely to the standard survival horror template, albeit without any regular combat. You make your way around the Martian base and a handful of other locations, sometimes venturing out onto the surface of the planet, where you solve puzzles, unlock doors, read documents, and get caught by the occasional jump scare. Moons of Madness isn’t afraid to take a minute to breathe – you don’t even encounter your first enemy until about an hour and a half in. During these quiet moments, you’ll notice Moons of Madness is really rather nice looking. The game isn’t cutting edge in terms of tech, but it’s plenty moody, serving up a wealth of dark foreboding corners, desolate Martian landscapes, and some imposing late-game sights. The visuals are elevated by great sounds design – the game’s slithering and squelching noises are all appropriately disgusting.

Make no mistake, Moons of Madness may take its time at points, but it’s no walking simulator or laid-back adventure game. The game also serves up its share of more intense moments, as you run for your life through crumbling terrain, scramble past writhing tentacles, and even do battle with a giant sentient tree. These action set pieces are generally well-handled, although there are a few instances where the game resorts to clunky quick time events. Thankfully, these moments are brief.

Overall, Moons of Madness does a good job of constantly presenting new scenarios and types of gameplay. In relatively short order, you’ll go from realigning communication arrays to scrambling through ducts to escape a murderous plant monster, to solving puzzles in your childhood basement in a flashback. The game gracefully transitions between these disparate scenes, and never sticks on one thing for too long. Only once do you have to backtrack to a previously visited area for any length of time, which, not so coincidentally, is the least entertaining part of the game. Moons of Madness is a roller coaster, a Hollywood blockbuster take on Lovecraft, and that isn’t necessarily a bad thing. This approach allows the game to shed a lot of the baggage that's become attached to Lovecraft's work over the years.

Ah, but like most roller coasters, Moons of Madness is over rather quickly. Most will be able to wrap up the game in six to eight hours, and once you’ve seen the credits there isn’t a lot of reason to go back. But hey, scary stories are often best kept short and sweet, and at only $30, I’m fine with Moons of Madness being an Old Ones and done ride.

This review was based on a PC copy of Moons of Madness provided by publisher Funcom. You can grab the game at a discount at Green Man Gaming. 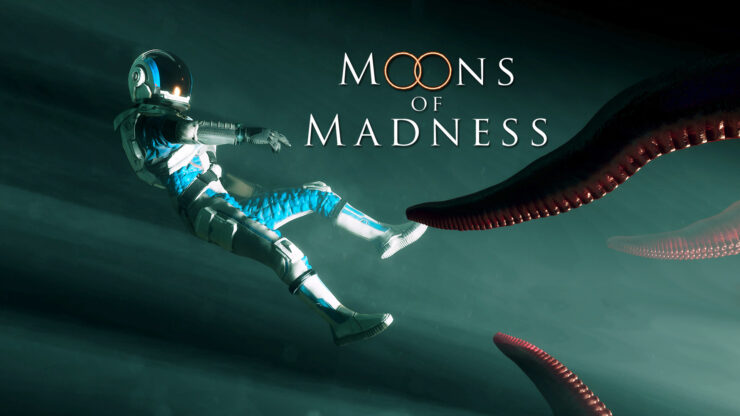 Moons of Madness is the best of the recent rash of Lovecraft games. It isn’t as dark or atmospheric as some of its macabre competitors, but it’s well-crafted, nicely varied, and builds to a satisfying, pulse-pounding crescendo. If you don’t mind your Lovecraft with a touch of Michael Bay, don’t hesitate to blast off for the Moons of Madness.