The video game industry seems to be infatuated with H.P. Lovecraft as of late. Recent titles like Bloodborne, Layers of Fear, and Dungeons of Darkness wear their Weird Fiction influences on their bloody sleeves, and a number of high-profile Lovecraft games are set to arise over the coming months. Perhaps the most significant of these adaptations is Call of Cthulhu, which is based on both on Lovecraft’s original writings and the classic pen-and-paper RPG of the same name.

Needless to say, Call of Cthulhu comes with some high expectations attached, as Lovecraft and tabletop gaming fans tend to be an, uh, intense lot. Will Call of Cthulhu satisfy your Weird Fiction cravings? Or just drive you crazy? Let’s dive in and find out… 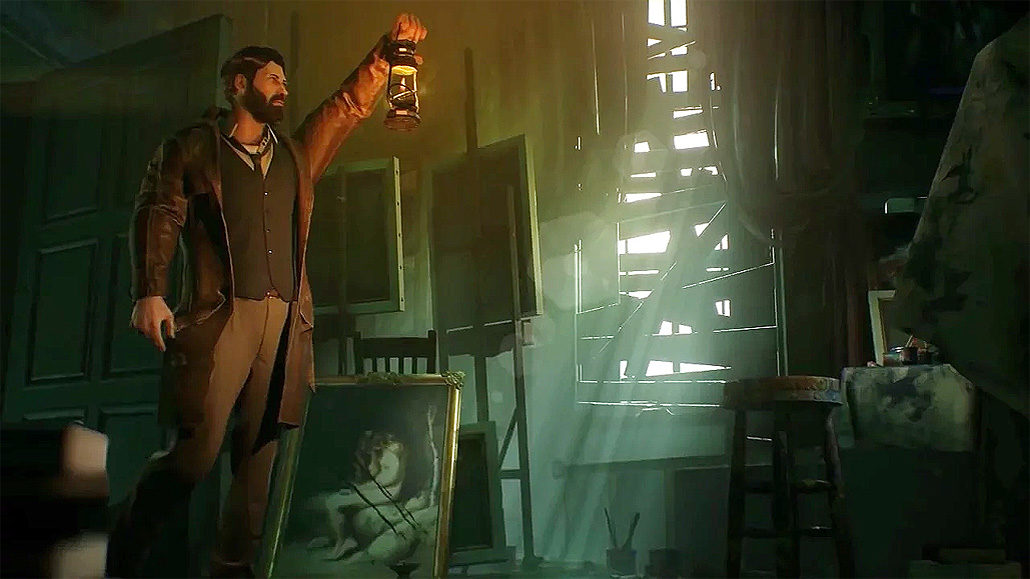 Call of Cthulhu casts players as Edward Pierce, a hard-drinking private investigator haunted by memories of fighting in World War I. With work scarce, he agrees to visit the isolated and ominous Darkwater Island in order to uncover what happened to the Hawkins family, who supposedly died in a fire. The Hawkins were the wealthiest family on the island, and matriarch Sarah Hawkins was gaining notoriety for her haunting paintings featuring various dark, twisted, sometimes tentacled, visions and creatures. Hmmm. Of course, Pierce quickly discovers there was more to the death of Sarah Hawkins and her family and as he delves deeper into the mystery he runs afoul of unwelcoming townspeople, violent bootleggers, hooded creeps, psychotic doctors, and some less explicable horrors.

So, yes, Call of Cthulhu is pretty standard Lovecraftian fare. If you’re hoping for a game that takes a more modern, nuanced approach to depicting mental illness, or perhaps provides commentary on some of Lovecraft’s more dated, unsavory beliefs, you’ll have to look elsewhere. Call of Cthulhu provides exactly what a horror fan would expect at pretty much every turn – yes, of course the creepy old mansion has a secret passage leading to underground catacombs where cultists perform dark rituals, the local asylum is a front for horrifying human experiments, and everyone on the island has ulterior motives. This predictability doesn’t kill the game, as Lovecraft tapped into a lot of primal fears and themes that still resonate more than 80 years after his death, but I would have liked just a bit more deviation from the source material. Truly great horror shocks you with the unexpected, and Call of Cthulhu rarely does. 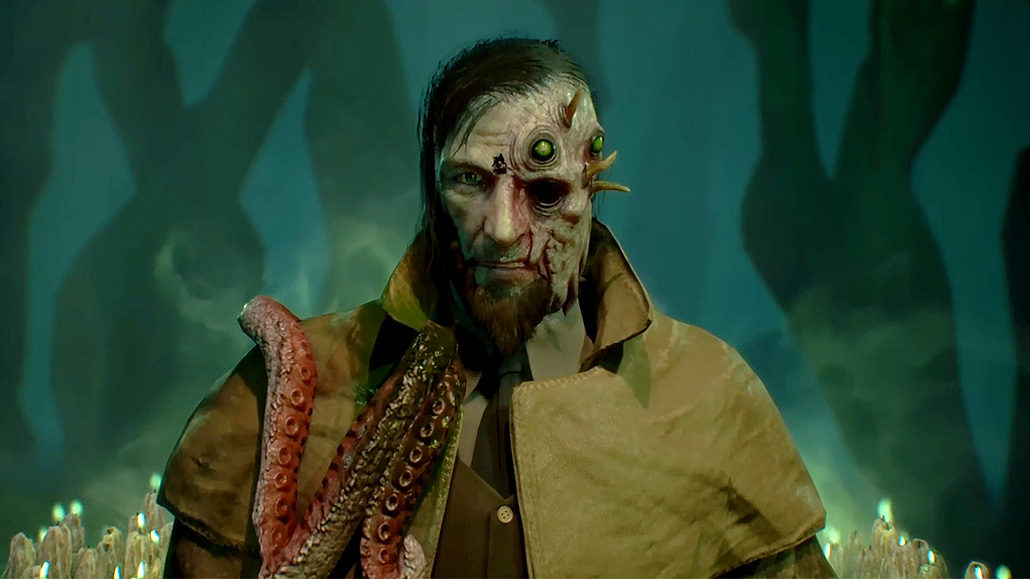 But don’t get me wrong, overly-familiar setting aside, this is a well-written game. Edward Pierce is fully-formed, likeable protagonist, as are many of the characters you interact with, and it’s fun to dig into the game’s eerie lore. The story also provides a few decent character twists, even if its overall thrust is easy to predict. Developer Cyanide Studio is mostly known for the Styx franchise and various licensed Warhammer games, mostly B-tier fare, in other words,  but they’ve upped their presentation game with Call of Cthulhu. Environments are properly detailed and atmospheric, and, some over-the-top New England accents aside, voice acting is top notch. Unfortunately, character models are a bit wonky. I wasn’t exactly shocked when Edward Pierce started losing his mind, as he looked like a bug-eyed weirdo right from the jump.

Call of Cthulhu is, primarily, a fairly straightforward exploratory adventure game. Wander around various spooky locations, click on hotspots, pick up clues and background information. You get the picture. As you’ll quickly discover there are no enemies, or really any danger at all, to worry about during these investigative sections, giving them a rather laid-back feel. This isn’t necessarily a bad thing – there are times I want to play something dark and atmospheric without the stress that accompanies most survival horror games. 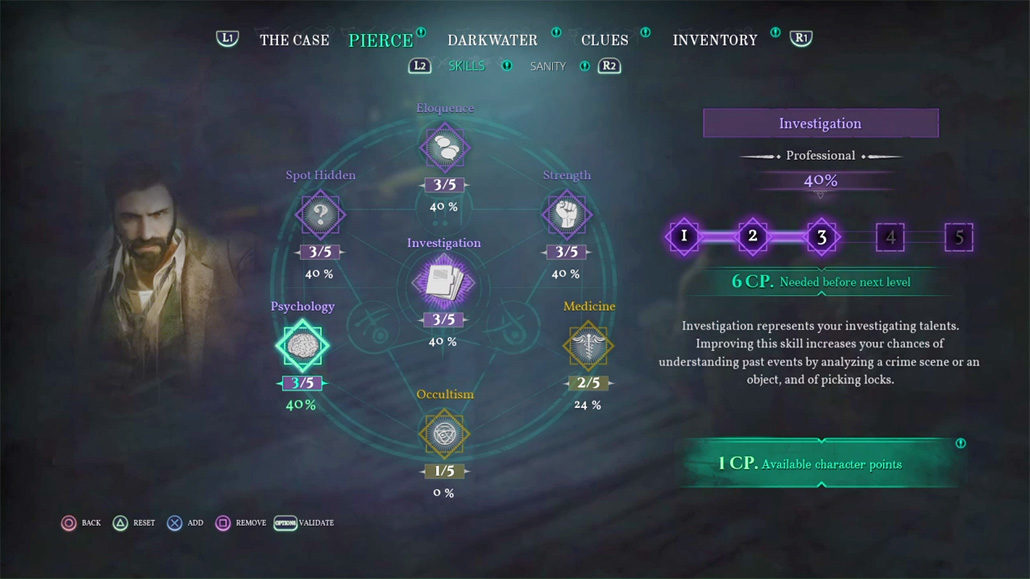 Periodically, you’ll stumble across an important crime scene, at which point you can enter Reconstruction mode. Similar to other recent detective games like Detroit: Become Human or The Vanishing of Ethan Carter, finding clues will summon a ghostly recreation of the crime in front of you, although you don’t have to make to make connections between events or determine the order of things – Pierce will do all that for you. So, it’s a somewhat simplified take on the “detective vision” mechanic, although there are rewards for being thorough. Usually, you only have to find a couple key clues to complete a Reconstruction and move on, but digging a bit deeper may net additional info you can use later.

As mentioned, Call of Cthulhu is based on a pen-and-paper RPG, which means the game does feature some basic character building. Since the game is mostly combat-free, you’re simply awarded Character Points intermittently as you play through the story. These points are used to level up five stats -- Psychology, Investigation, Strength, Eloquence, and hidden spot detection. You can also level up two other stats, Occultism and Medicine, by finding specific books and items. It’s all rather rudimentary, although the game does force some choices on the player – you only get enough points to max our one or two stats, so which do you choose? Or will you spread your points around evenly? 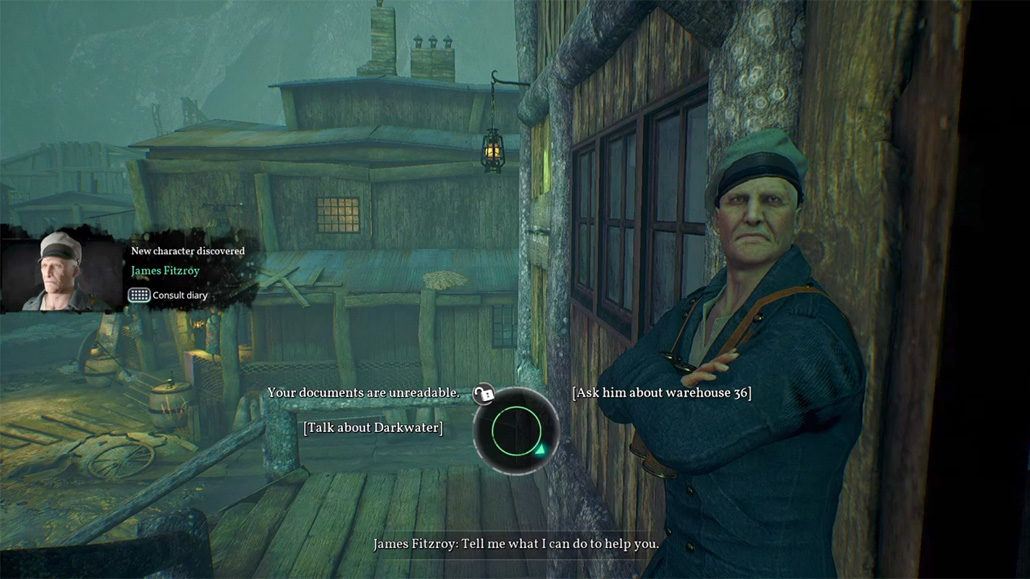 The main purpose of finding extra clues during Reconstruction scenes and leveling up Pierce is to unlock more options during conversations. Occasionally, you may also gain access a new side path or puzzle solution. For instance, early in the game, you have to get into a specific warehouse -- if you’ve leveled up your Strength and spot detection enough, you’ll be able to sneak in the back way, but, if not, you’ll have to smooth talk a local crime boss into letting you in. Your choices will determine how much of your sanity you’re able to cling to, which is a one-way street in Call of Cthulhu. Witnessing certain things will irrevocably reduce your mental state, and if it dips too low, you get fewer options during a key decision point that determines the ending of the game. So yes, all the clues, character building, and paths taken basically all lead up to a single choice. Call of Cthulhu tries to present an illusion of player agency, but, ultimately, you’re walking a rather narrow path.

While Call of Cthulhu mostly sticks to its deliberate detective groove, the game does, at times, mix things up  – you may find yourself plunged into a hallucinatory dream, in the body of another character, or even engaging in a brief bit of action. These sections are a mixed bag. While the dream sequences are effective and provide the game’s only real shocks (Call of Cthulhu can be ominous, but it’s rarely scary) anything resembling action is a wash. Two boss-like sections where you have to outrun and outwit a grotesque beast known as the Shambler are more irritating than challenging, and the game’s single out-of-place shooting sequence is downright abysmal. I get that horror games need to present some sort of threat to be scary, and I commend the makers of Call of Cthulhu for trying to add some variety to the game, but these action bits feel half-baked at best. 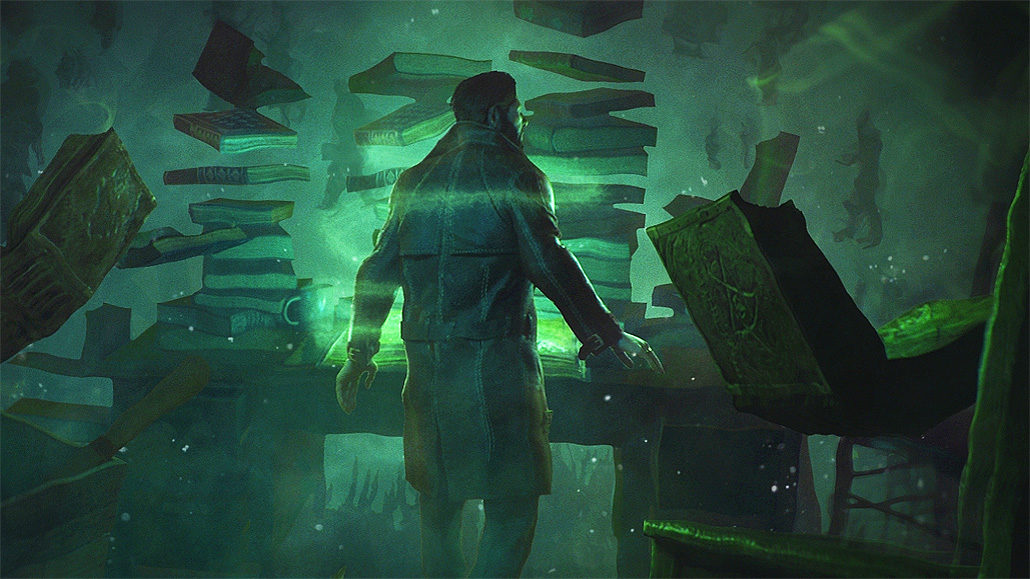 With 15 chapters running about 45 minutes apiece, Call of Cthulhu should take most players around 10 hours to complete. While I only played through the game once, I considered starting a second file, just to see how much I could alter my path. I suspect other players will be similarly tempted – Call of Cthulhu may keep you locked in its tendrils longer than you might think.

This review was based on a PS4 copy of Call of Cthulhu provided by publisher Focus Home Interactive. You can purchase the game on Amazon for PlayStation 4 or Xbox One, while the digital PC version is available from Green Man gaming at a slight discount.

Call of Cthulhu is horror comfort food. The equivalent of a dog-eared horror paperback found on some dusty used bookstore shelf. The game isn’t particularly daring or terrifying, but it is a well-written and crafted bit of low-stress spookiness. A handful of ill-conceived sequences drag Call of Cthulhu down a notch, but, thankfully, they aren’t enough to fully sink the game.