Conan is back, again. The unexpected video game resurgence of the franchise now makes its way to the RTS genre, promising grueling challenges and unpleasant monsters. Headed up this time by the developers at Petroglyph, the team behind Grey Goo, this RTS is a tactical delight, offering razor-sharp strategy in a fun, fantasy setting.

Breaking away from the usual real-time strategy formula, Conan Unconquered blends strategy, city building, tower defense and horde modes together to create a tense, dynamic fight where you can barely catch your breath between clashes. Players are given a fortress to defend against an interesting challenging wave of enemies. While you might start off fighting back small bands of nomadic spearman, you’ll end up facing off giant snakes, corpse catapults, and necromancers.

To hold back the terrors just out of sight, you’ll have to build up your defenses. While walls can be effective at slowing down the tsunami of enemies rushing towards you, you’ll also need something a little strong to put them down. Because this game is distinctly defense-oriented, you can put most of your resources toward upgrading your walls and towers, adding useful defenses such boiling tar and fire pits to give your troops an edge over the monsters.

But the maps of Conan Unconquered are worth exploring, too. Outside of your walls are creepers, like giant spiders and (for some reason) ostriches, that can be killed for useful resources. Conan Unconquered almost feels like Warcraft in that it gives you a hero, Conan or Valeria, that acts as your commander on the ground. They have incredible fighting abilities which can hold off the first few waves single-handedly, as well as explore the surrounding area. These heroes are like the queen in chess, capable of turning the tide in a hopeless battle, but equally devastating to lose. They respawn after a minute or so, but that can be more than enough time to be overrun.

When you’re deciding whether or not to use Conan to plug a hole in your wall, you’ll be carefully managing your resources to repair it all. Resources in this game are quite complex and require a fair amount of thought, which can be a little problematic when you can see the slider on the top of the screen showing you how close the next wave is. Perhaps that's exactly the intention, though. Resources are divided into flat resources such as food and thralls (your population) and gathered resources like wood and gold. You’ll need a bit of each to build more or less anything in the game and it quickly becomes a balancing act to keep your borders secure without losing the ability to research and shore up your supply line.

The resource management is the hardest part of Conan Unconquered, posing the most significant learning curve in the whole game. When you’re always feeling pressured it's hard to take the time to learn the ins and outs of the process and for my first several hours I never managed to effectively use any of my resources to research anything valuable. Early games are spent desperately repairing and rebuilding after each wave and you’ll always feel on the backfoot. It's exciting, sure, but can be a little stressful when you feel trapped in your circumstances. But once you start unlocking the improved walls, units and traps, you start to see the value of sinking so much into something that isn’t immediately useful.

That being said, there aren’t that many units for you to utilise in Conan Unconquered. Started off with javelin throwers and swordsman, there’s only around four or five other units for you to research. Enemies, on the other hand, are much more varied with a host of monsters, humans and wildlife to contend with. It's a shame the players don’t get the same kind of variety, especially when some of the options are locked behind a lot of research and management. And because of the tower defense nature of the game you’ll never keep any research between games, and the resources are randomised which means you’ll find some sessions much easier than others.

While the game is already challenging on its own, Conan Unconquered is at its best when played with a friend. Here you each get a hero but are defending the same fortress. How you divide your labour is entirely up to you, but what's important is that it creates all the best moments of a team based RTS in small condensed sessions. Whether you’re holding one breach only to discover your friend is being overrun or just arguing over what to focus on while the next wave approaches, the stress is made more fun and frenetic when you have someone else to bounce it off.

Surprisingly, the biggest let down for me was the graphics. While they do the job well enough, the stylish and sleek opening montage gives way to dirty and unpolish character models. While they do cram a lot of information on screen, especially when bloody clashes lead to diseased battlegrounds, but it would have been nicer if everything was just a little crisper.

Regardless of its faults, Conan Unconquered is a deep and engaging strategy game that shouldn’t be ignored just because Three Kingdoms came out around the same time. From its unique take on the RTS genre to the deep resource management and feeling of constant tension, the whole experience leaves you desperately wanting just a little more.

Review code provided by the publisher. You can purchase the game digitally via Green Man Gaming. 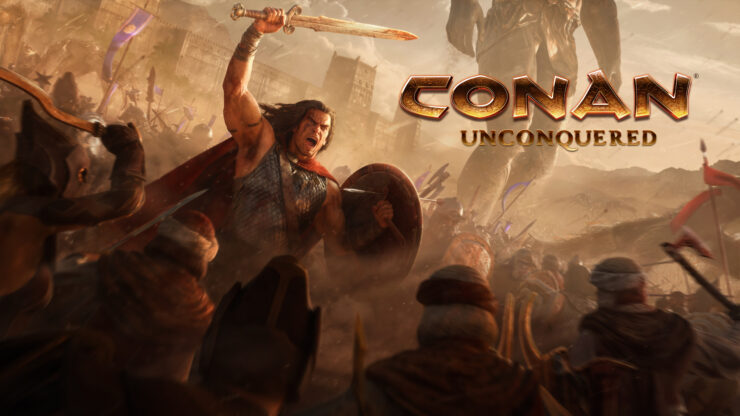 Conan Unconquered isn't the most polished RTS to be released this year, but it is filled with unique ideas, challenging enemies and fun emergent moments.