The first challenge you’ll have to overcome in Conan Exiles is the download. For this review, I was offered a download code which clocked in at around 50 GB. Even with good, uninterrupted connection that’s still a few hours before you can actually play the game. Once you finally enter the Exiled Lands, though, you’ll find a survival game with a heavy leaning on RPG adventures.

Because of the recent incredible popularity of survival games, only now waning thanks to the breakthrough success of the Battle Royale genre, the marketplace is completely oversaturated. Most games tried to build on unique gimmicks or mechanics to try and stand above the crowd, and Conan Exiles is no different. As you may have guessed, the game is based on the Conan: The Barbarian, the universe created by writer Robert E. Howard almost a century ago.

While we get to see Conan himself in a fairly impressive opening credit sequence, nothing else is immediately recognizable to someone who is not familiar with the fairly niche brand. But regardless of that, Conan Exiles is some of the most fun I’ve had with survival games.

Players start by making their impossibly proportioned character, complete with breast and penis size sliders. Once you’re happy with your respective genitals, you’ll start with all the basic needs of a survival game. Find food and water, shelter and start crafting some basic tools. If you’re playing online you’ll probably find that the tempting river basin is where all players are naturally drawn, and you might want to think about trekking a bit further afield to avoid any potential thieves or murderers.

The graphics aren’t exactly incredible. I was playing on a normal PlayStation 4 but I don’t think they’d much improve with a Pro. They’re serviceable enough, but the distant ruins, jungles and deserts don’t quite offer interesting vistas or raw beauty. Maybe that’s why so many players choose to run around naked, at least it gives them something to look at.

Playing online in these server-based games is always a mixed bag for me. For instance, I started Conan with an offline adventure to get the hang of it before making new characters in PvE and PvP servers. These servers, however, are nearly always full. My offline character is by far my worst, with an ugly little hut wedged up against a broken bridge, and I’d much rather play my other characters, but sometimes I just can’t. I’m not sure what the solution could be, but when I find my PvP server full, sometimes I just move onto another game. It's disappointing that the game dictates when I can play it, rather than the other way round. This is doubly so when trying to play in servers with friends.

But once you have a survivor set up, the adventures found in Conan Exiles are much more interesting than other survival games. While it might not have tameable dinosaurs, the map is filled with ruins, caves, mountains and wonders to explore. On top of that, you’ll be facing dangerous monsters, animals, NPCs and possibly other players too. All this might seem overwhelming, but Conan’s Journey system serves as a very well balanced tutorial, as well as giving the player some direction if they ever feel lost. While starting with simple objectives like finding food and water, it progresses as you do, encouraging you to explore the map, understand the crafting systems and upgrade your equipment.

Unfortunately, like a lot of deep survival games for consoles, the menu controls are a little uncomfortable here too. As in so many games of this genre, you’ll have to spend upgrade points to learn new crafting recipes, but for some reason, the recipe options are split into two different menus. This meant I had to spend a good part of my early game not realizing I had completely missed the second, more in-depth options. Despite this hiccup, most of the menus have some kind of logic, and you’ll eventually get used to it after an hour or so of fiddling around.

Crafting and upgrading is a slow, delightfully satisfying burn, though. Creating your first armor set might look tedious, but I committed several hours to hunting without even realizing it. And once you’ve built that armor, you’ll immediately start looking for prizes on your list. It took me about five or six hours with the same character to build a set of iron equipment. While it should probably be called a grind, I never found myself struggling to continue the endeavor.

That might be due to the combat system which feels weighty, brutal and fast. Nearly every enemy you encounter is a provable threat and can actually take a fair beating before going down. Weapon swings are slow, so you’ll have to time attacks accordingly, while enemies often telegraph when you should quickly move out of the way. The stamina system means you can’t try and stagger chain either so its best to dance around your opponent and wait for the right time to strike. There’s an armada of weapons to choose from, but for me, the pike was the most effective and enjoyable tool, for the most part. Swords have the knack of feeling longer than they apparently are, although my trusty pike is a bit harder to aim.

The combat also highlights the biggest problem of Conan Exiles, something it sorely needs to address. I never played any of the early access parts of the game, but the combination of lag and frame rate drops makes combat a more dangerous and annoying affair than it would otherwise be. Even in single player, the game sometimes shudders under its own weight and you’ll find yourself rubberbanding around the arena, often while the monster continues to take swings at you.

Still, where Conan stands out for me is the combat, which feels more like hack and slash than the standard war of attrition I expected, and the map. I didn’t expect such interesting locations and dungeons to explore when I first booted up the game. It won’t change anyone’s mind if survival games aren’t their thing, but it might capture the heart of fairweather fans. With the Journey objectives pushing you forward, the grind calling you to hunt and gather, and the expansive map begging to be explored, Conan is an exhilarating if flawed experience.

Reviewed on PlayStation 4 (code provided by the publisher). You can purchase the game for consoles via Amazon and for PC via Fanatical. 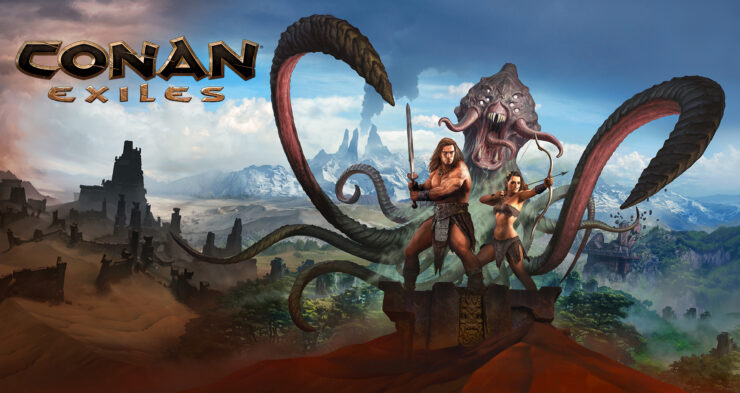 Despite its issues and flaunts, I couldn't keep myself away from Conan Exiles. Its meaty combat, huge map and nicely paced objectives made the game morish, even when I got lost (in the menus, not the jungles).