Over the past few years, we have seen a lot of games based on the terrifying universe created by H.p: Lovecraft, which is hardly surprising, considering how the setting is just perfect for a story filled with fear, tension, and horror. Not too many games have managed, however, to capture the true sense of fear that comes from Lovecraft's work, as it's based on a subtle type of fear, the fear of the unknown which all men must inevitably face. Frogwares' The Sinking City is definitely among the games that nailed the atmosphere perfectly, making players feel part of a universe where nothing is as it seems.

The Sinking City is set in the town of Oakmont, a town made up of seven districts which have been recently affected by an event known as The Flood. Due to this event, most of the town is now underwater, and its residents are being plagued by visions and hysteria. The situation in the town is made tenser by the arrival of several refugees from The Flood and the fact that Oakmont citizens don't look too kindly on these outsiders. Or on those different from themselves, as Oakmont has a long history of racism between the different unique individuals that populate it.

Great War veteran, private investigator and U.S Navy sailor Charles W. Reed is not new to visions and strange occurrences, as he has been experiencing them for years. Eventually, Reed is invited to Oakmont by Johannes van der Berg to discover the causes of the nightmarish visions that have been plaguing him. Little does he know that his journey to the town will test his sanity as he comes to learn the history of the town and the truth behind the Flood.

The Sinking City's story is definitely among the game's best features. While not based on any specific Lovecraft novel, it makes use of the lore in an extremely good way, creating an oppressive atmosphere that I feel is unrivaled as of now. The story is filled with references to the Lovecraft universe, and every little piece of dialogue contributes to building the world. Despite this, knowledge of the universe is not required to enjoy the story, though your understanding of everything may not be complete.

As for the actual story itself, it is a well-made mystery and horror story. Reed's journey is masterfully crafted so that it keeps players on their seats, slowly revealing more details on his past, explaining why he has the supernatural powers that aid him during investigations. NPCs involved directly in the story are also well-written, and all contribute to making Oakmont a fearful place where no outsiders should truly stay for more than a short while. The story also tackles some themes like racism, religion, and occultism in a mature and thoughtful way.

The Sinking City gameplay is not as good as the story, but it definitely gets the job done in a competent way. The game is basically a third-person survival horror game with investigation mechanics and a much bigger location to explore, filled with optional sidequests and secrets. The investigation mechanics are almost identical to the Sherlock Holmes games: thanks to them, it's possible to highlight clues that are related to each case. Particularly well done are the Retro Cognition mechanics, which allow Reed to basically turn back time and see what really happened while investigating cases. What sets The Sinking City apart from the Sherlock Holmes games is that players get no hints or waypoints regarding locations, even on the easy difficulty setting, which is a very welcome feature for those who are looking for total immersion. Most of the time, hints are provided by documents and dialogues, so players will have to search for clues and new locations based on these hints alone. The Mind Palace from the Sherlock Holmes games also makes a comeback, allowing players to put clues together naturally to reach the solution of the case.

New for an investigation game developed by Frogwares are the combat mechanics. While not prominent, fighting against the fearsome creatures that now populate Oakmont still plays an important role, with even some bosses making an appearance. Combat is somewhat basic: players can use a melee attack or shoot with the equipped weapon. Ammo is extremely limited in the game, so players must pick their fights carefully unless they want to run out of ammo when they need it most. Fighting and defeating enemies provides some benefits, however, as Reed earns experience points that can be used to unlock new skills in the three different skill trees. If you really want to fight enemies but want to save ammo, it's also possible to set up some traps, which can be made even more useful through learned skills. The Health and Sanity meter also influence combat in a big way, as it is death once Reed's loses his sanity due to the contact with the monsters found in the town.

While there's some variation to combat and it's solid enough, it's honestly my least favorite part of the game. It feels clunky, lacking a proper dodge maneuver, and most of the times it just felt like it was interrupting the game's flow, which feels otherwise great when investigating and exploring. Combat doesn't feel out of place, considering the creatures that populate Oakmont, but a better implementation would have done wonders.

The Sinking City features a lengthy main quest which can last over 20 hours, depending on how quick the player is in solving cases, but also a lot of different optional sidequests which flash out the setting considerably. Some of them are extremely simple, such as reach a location noted on a document, while others are more complex and involve some investigation and combat. Completing sidequests is highly recommended, as they often lead players in parts of the town which they would have no reason to get to otherwise, and exploring Oakmont is among the most fun things that can be done in the game. Some parts of the city are also submerged, so players will often need to use boats to move from one flooded street to another. All streets are also named, making the town feel real.

NPCs, on the other hand, make everything possible to make the town feel somewhat barren and artificial. AI is generally quite bad, and you will often see characters walking into walls or changing directions way too often. The enemy is also plagued by AI issues, as monsters often try to attack the players through walls. These issues, thankfully, can be fixed with updates, but as of now, they break immersion quite a bit.

The Sinking City also suffers from some small technical issues on PC that, while not major, they do get in the way. There are some strange slowdowns happening randomly, but they mostly occur right after loading a save file or exiting a menu. These issues are present on two different systems, so it's likely something that will require an update to be fixed. Issues aside, the game generally runs well on my system which sports an i7 3700 CPU, NVIDIA GTX 980 Ti and 16 GB RAM at 1080p resolution and every setting to max.

Strictly speaking about graphics, The Sinking City looks great. Character models are very clean and detailed, while animations, while not particularly elaborate, do look natural most of the time. The city of Oakmont looks great as well, with tons of detail which convey the chaos brought forth by the Flood and the feel that the town is one of the most dangerous places of the world. The weather system and the day and night cycle contribute to making the town look beautiful, in the eeriest way possible.

At the end of the day, The Sinking City is one of the best games, if not the best games, based on the universe created by H.P. Lovecraft, using the lore to create an original story that doesn't deviate from the canon at all. The story and investigation mechanics are excellent, but the clunky combat, light technical and AI issues do damage the experience a bit. Don't let them prevent you from getting the game if you're a survival horror fan, though: the oppressive Oakmont air will make sure to make your stay in town as uncomfortable and tense as possible.

PC version tested (review code provided by the publisher). You can purchase the game for PC on the Epic Games Store or Humble Bundle. 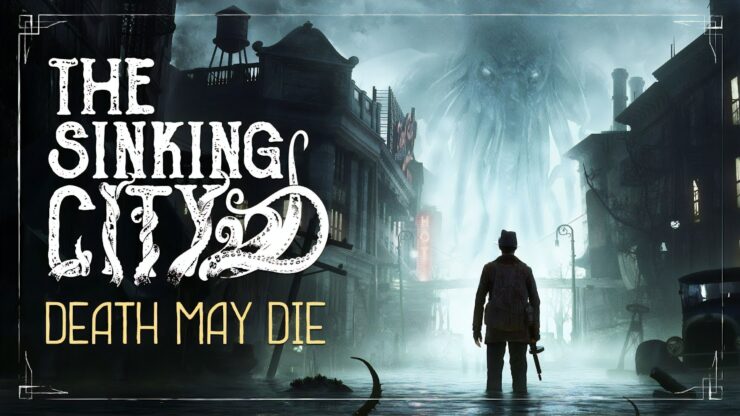 The Sinking City is probably the best Lovecraft inspired game currently available on the market, thanks to its oppressive atmosphere and its story, which utilizes the lore masterfully without deviating from the canon. AI and technical issues, as well as the clunky combat, are often immersion breaking, but the excellent investigation mechanics and exploration features make it easy to look past these issues. Highly recommended to survival horror fans and those who live and breath Lovecraft.