Beginning when you speak to Theresa in Rattay, you are flashbacked to her former life in Skalitz, where according to the game's description you get to experience a slice of “ordinary life” in the small town. The problem is, ordinary life is incredibly tedious, though if you've played Kingdom Come: Deliverance before you already know the deal. When I’m looking to sink my time into an immersive simulation, I’m trying to escape my chores, not do someone else’s. The work is menial, repetitive and frustrating and has absolutely no pacing to it at all.

The beginning of the flashback is a series of mundane tasks followed by going to the blacksmith to pick up nails. Players might recognise this part as when Henry and Theresa meet in the game, but you’d be wrong. A Woman’s Lot DLC actually starts the day before the base game. This means that walking all the way to forge is a pointless journey, and I have no idea why it was included as a red herring.

This extended standstill in Skalitz also includes yet another sword fighting tutorial, for some reason, and several fetch quests. After an hour or two, the story does pick up a little. A side quest that involves hunting a wolf adds a little action to the game, but it is hard to invest much in this questline when you already know the end result. The last thing you do before the attack is a strange and seemingly out-of-nowhere quest where you have to sneak into the silver mines. The time spent before this mission in A Woman's Lot could have been better used contextualising the heist, but instead it meanders around the village before introducing this without any forewords.

The mission itself was once again more annoying than it was exciting. The mines in question are not hard to navigate and you can even get a map to help you, but they are long. Each mineshaft will have you walking in the dark, in a straight line, for what feels like an eternity before the joy of taking a turn. There are perhaps two moments in the entire mine where you have to consider stealth, but these pass you by without much worry.

After that, there is the attack. Theresa is no warrior, so you’ll have to argue with the rather unpredictable stealth system to escape. After that, there isn’t much to say about it. It is a lot more time in Skalitz, but it’s hard to care too much about them. The question of what happened to Theresa probably wasn’t worth answering, especially when it involves feeding chickens.

The second mission in A Woman's Lot DLC is much more interesting. This time you’ll need to speak to Johanka, another Skalitz survivor, in Sasau Monastery. Plagued by visions of Hell, fire and the Virgin Mary, this is a story about faith and, as the plot progresses, a woman’s role in religion.

Naturally, the first mission involves returning, once again, to Skalitz. This time you’ll be wandering around the outskirts near the mine, again, but the pacing isn’t nearly as stunted and the intriguing nature of the vision makes it much more intriguing to continue. After this test of faith, you’ll start doing more work for the would-be-messiah, including convincing her to speak to in public about her visions.

Although the voice acting is as varied as ever in A Woman's Lot, I found this tale much more engrossing, even if there were some strange decisions in the way the story is told. I can only manage that few people will agree with me on this, but it was odd that while Johanka is heralded as a prophet (or heretic, depending on who you asked), it's your character that does more or less all the divine duties. Obviously, the player should be the one doing the interesting work, but when the DLC is all about women it's strange that half the time you're playing as a boring woman and the other half you’re a man in service to a much more interesting female character.

Johanka’s quest also has multiple endings, and in typical fashion for women in the 15th century, none of them are great. Some are obviously better than others but don’t go expecting this is the beginning of the Hussite Revolution or Women Suffrage. And while her story might be more interesting as I said before, it is still filled with padding and moments where the pacing stalls out entirely, leaving you desperately trying to get on with the plot.

For fans of Kingdom Come, there are some bits good bits here and there. Tricky swordfights and a few open-ended puzzles catch your attention, but for all of that, there is stuff like feeding chickens and wandering around in the dark that does a lot to ruin the overall experience. Unless you really have to know exactly what happened to Theresa back then or just want a couple of extra missions, perhaps A Woman’s Lot isn't quite necessary. 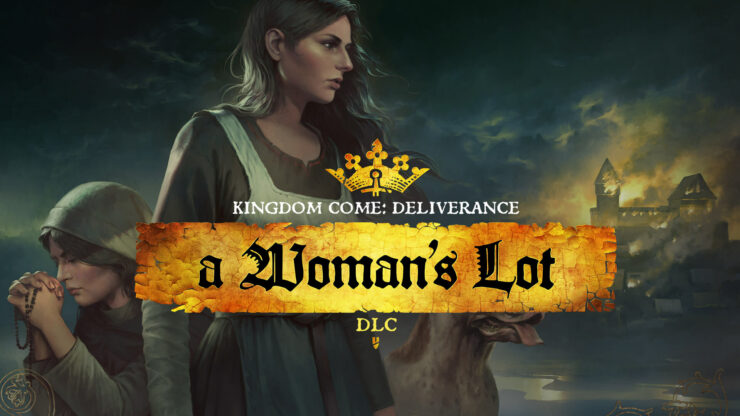 While Johanka's story is interesting, albeit with plenty of boring sections scattered throughout, Theresa's 'ordinary life' is so dull it made me want to do my own chores more than play a video game.