Open the box and you’ll find a nice Razer protective case. It feels sturdy and well padded so I’d be pretty confident throwing it into a backpack and walking around with it bumping against other stuff without worrying too much. It’s zipped so it’s not going to fall open, and it’s got that nice Razer green zip so any gamer you come across will likely recognize what brand you’re toting about. 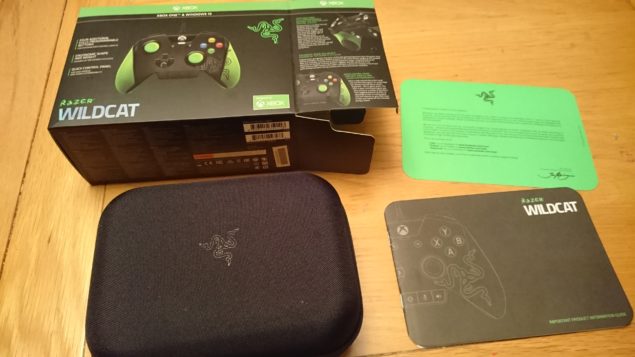 Inside the case, you have the controller itself, a built in pouch for the cable as well as the usual Razer logo stickers and an accessory pack. First shock. The side grips and sticks aren’t green. Hmm, this doesn’t bode well for me. I really liked the green stuff on all the promotional material, but as you can see below, right off the bat, this looks mostly like fairly standard Xbox One controller territory…

Also in the case is an Accessory Pack, with… you guessed it! Green stuff! Stick caps, rubberized grips and a little screwdriver… curious… It’s slightly disappointing though. I don’t know about you, but lining up stuff to stick onto things is my own personal kryptonite and that’s when it’s trying to put it onto straight flat edges like a phone screen. Maybe your OCD isn’t as bad as mine, but if it’s not perfectly straight, or I can see a speck of dirt or dust, or feel something under the surface, it drives me insane! Curving it around the handles of the Wildcat strikes me as something reserved for my own personal private hell. A place where the internet is always down, the frame rates are low and the temperatures are high. 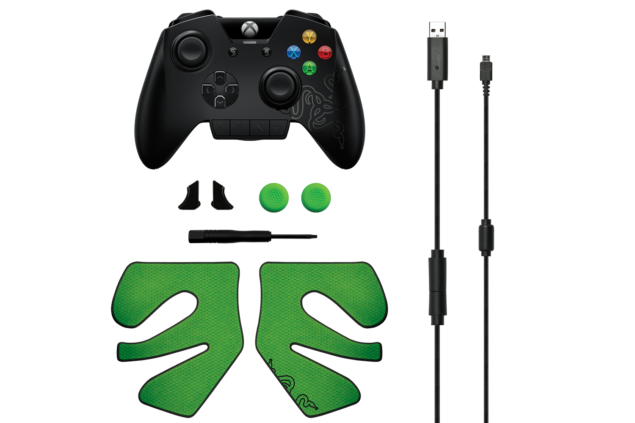 Razer Wildcat and Accessories (including kryptonite!)

Stick caps are a different matter though. I fiddle around with them (they stretch over the sticks pretty easily) and now have green caps on my Wildcat! After thumbing the sticks around for a few minutes though, I decide I don’t like the feel of them so remove them again. 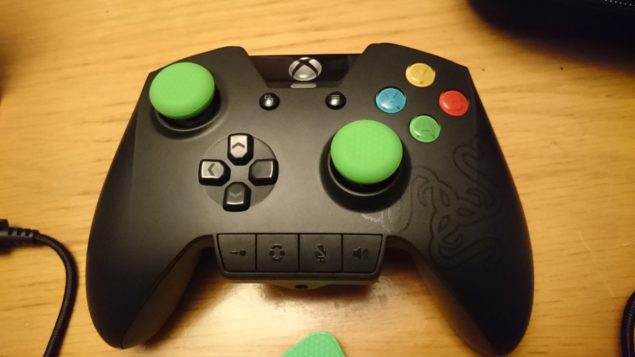 I’m serious. Some people actually are not interested in 50% of the 4 extra programmable buttons the Wildcat gives you. Perhaps there’s a legitimate reason for that, but I’m not sure what it is at this stage.

So, mildly bemused, I start to find my way around the Wildcat.