So here I sit with my non-green (except for the “A” button of course!) Wildcat. The USB cable has the usual Razer braided wrapping around it giving it a nice quality feel and the end which goes into the controller has a nice notched housing to ease the connection woes that always seem to plague me when trying to insert a USB cable without looking at it to line it up. The cable just under 10 feet long (3 meters for those in metric), I guess to cater to those who play on a console from a sofa. I’m on a PC so it’s kind of overkill. It’s got a detachable port close to the end that plugs into your Xbox/PC.

All in all, it feels pretty well put together and anyone familiar with a normal Xbox controller is going to feel mostly at home holding this. The exceptions obviously being the extra buttons… 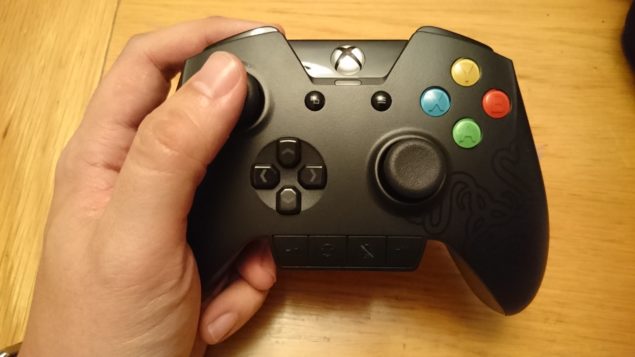 M1 and M2 are on the shoulders (although closer to the center than the triggers), while M3 and M4 are round the back. I’m a pretty big guy and probably have slightly larger than average hands so your mileage will likely vary compared to mine, but my middle fingers slide naturally into place right on M3 and M4 and boy do those buttons feel good.

M1 and M2 aren’t quite as natural. I like to use triggers with the front pads of my index fingers, but in this position I obviously can’t reach the M1 and M2 buttons which are closer to the center of the controller than the triggers. If I’m to use my natural position for triggers, I’ll have to slide the fingers forward to reach M1 and M2. If I want to be able to use the triggers as well as M1 and M2 without changing position, then my the first knuckle behind the front pad of my fingers will need to rest on the trigger which means that I can use the tip of my fingers to reach the custom buttons.

It’s not ideal for me, I’m not sure how other people use the tips of their fingers rather than the knuckle immediately behind them on triggers, but if you do use the tips you’ll find yourself shifting to reach M1 and M2. 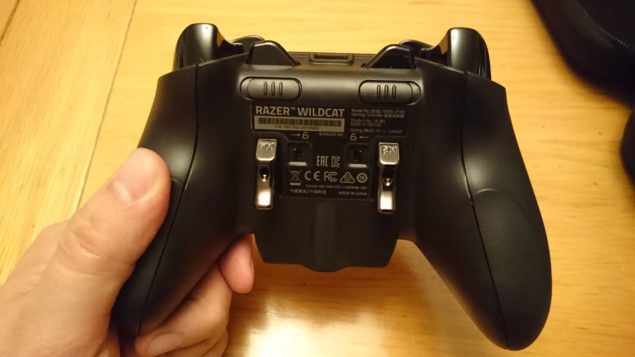 The weight and balance feel nice and with regards to the ergonomic design, two ridges on the back side help my hand fit quite snugly into place. It’s not immediately noticeable as being significantly more comfortable than a standard Xbox One controller, but comparing one immediately after the other, you do feel slightly more comfortable.

On the front you have a successfully replicated Xbox controller layout with a few key differences. At the bottom of the controller are 4 buttons allowing you to:

They’re unobtrusive and don’t get in the way of normal operation.

Additionally, there are some trigger guards which you can slide to stop the triggers fully activating.

The sticks have a bit more weight to them than a standard Xbox controller but I wouldn’t describe them as heavy, while the D-pad also has individual buttons for each direction rather than the solid single D-pad of a normal controller.

Where the difference really comes into play for me is the ABXY buttons. The Wildcat has got some clicky switches here, which feel very different to a normal controller with its dull bump. The buttons are very light and actuate extremely easily. At a guess, I’d say the travel distance is about half that of a button on a normal controller. Personally, I prefer clicky stuff. My keyboard doesn’t run on Cherry MX Blues by accident (much to the bane of my wife!)