Finally, to gaming. I recently finished Assassin’s Creed Syndicate but still had it installed so figured I’d head to the level 9 underground fight club for some good button mashing. The Wildcat felt great. Combos are easy to pull off and it feels much as a good controller should, namely intuitive and letting you get on with the game. The lightness of touch for the button activation isn’t problematic and gameplay felt good and smooth. I tried out the custom buttons and found them to be mapped to existing buttons elsewhere on the controller (yeah, I hadn’t read the instructions, learn by doing and all that!).

Ok, so coming from a standard Xbox One or nVidia Shield controller, the Wildcat feels great. Does it feel $150 (£124 on Amazon UK, €150) great? Hmm, not to me. Time to try another game and see how it handles at driving. 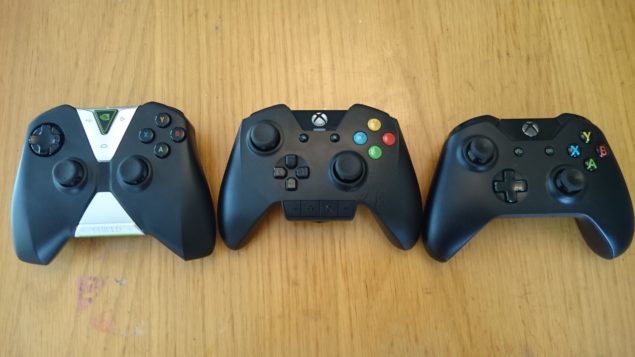 I’ve had Project Cars in my library for a while now, but only recently started to try it. Racing games to me are either controller or wheel based (or many moons ago, neGcon back in the early days of Gran Turismo!) so the Wildcat should feel right at home here for me and it doesn’t let me down. I’m still discovering Project Cars and it seems that by default it uses Automatic gear changes. That’s all well and dandy but I suspect (as with most racing games I’ve known) that if you can master it, manual gear changes give you the edge in racing so I need to try them out. Enabling manual gearbox is problematic though, as the default controller buttons to change gears are the shoulder buttons above the triggers and this just feels all wrong to me. Time to break out the Wildcats’ instructions and figure out this custom button programming…

Yeah, I’m a bit of a lazy guy at times. The path of least resistance and the mantra “if it ain’t broke, don’t fix it” are my friends, so when Assassin’s Creed functioned exactly as I needed it to, I didn’t bother looking at M1 – M4. Now, however, there’s a problem.

The instructions are actually remarkably straightforward. Select a profile where you want to save your custom config (profile button, it highlights an LED to the left or right of the Xbox button at the top center), hold down (in this order) the program button, the button you want to program and then the button you want to replicate. The Wildcat buzzes and that’s your confirmation. Rinse and repeat. 30 seconds or so later and I’d programmed all four of the custom buttons, the left two (M1 and M3) were now my LB shoulder button (for gear down) and the right two (M2 and M4) were now my RB for gear up.

Back To The Game

Ok, this is more like it. Gear changes are now easy (ish). I tried using the M1 and M2 buttons, but quickly stopped using them for the same reasons I mentioned above. I want to use the tips of my index fingers on the triggers and want to be able to change gears without moving them from my optimal position. As such, M3 and M4 became my immediate default buttons for gear changes.

Did I immediately become a racing legend? Of course not, that’ll take practice time in Project Cars, but the Wildcat with its custom buttons has given me an easy route into manual gear changes which felt uncomfortable before and meant I had to move from my optimal and most comfortable position, so I definitely see the attraction of the custom programmable buttons.