Paris-based studio Spiders (acquired a couple of months ago by French publisher Bigben Interactive) is an interesting example of perfecting expertise through hard, steady work. Ever since their foundation in 2008, they have focused solely on the development of roleplaying games.

However, their titles (Mars: War Logs, Bound By Flame, The Technomancer) received mixed reviews in general, often due to the small budget and very short development time (one to two years). Each title improved a little over the previous one, but not enough to be a serious contender in the increasingly crowded RPG genre.

GreedFall is changing all of that. The first game to enjoy three years of development, it marks a clear step up for the studio.

Arguably the most important and most easily noticeable improvement can be found in the size of the playable areas of GreedFall. As I mentioned in the review of The Technomancer, one of the biggest downsides was undoubtedly how the funneled maps severely limited both immersion and exploration itself, nowadays a pivotal element of roleplaying games. 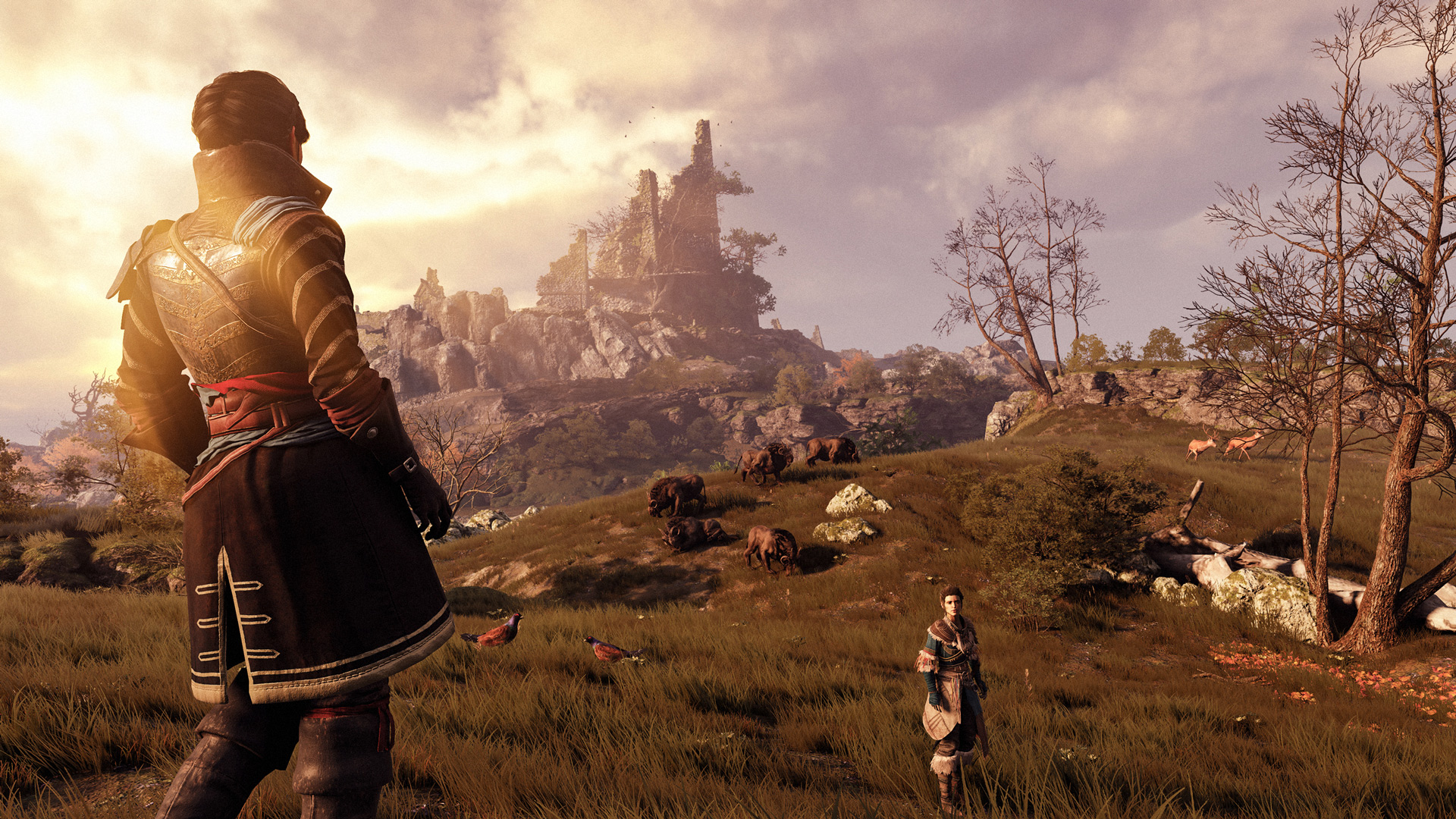 This is largely, though not entirely, fixed in GreedFall. Never before in a Spiders game cities felt as properly sized as they do here and the same can be said about the environments. This helps a great deal in letting the player believe it's roaming actual places rather than something that can obviously exist only in a videogame.

The best comparison that comes to mind is with Dragon's Dogma as the areas feel similarly sized. It's not the most flattering comparison, truth to be said, since CAPCOM's amazing action RPG was released for the previous generation of consoles (PlayStation 3 and Xbox 360) which had far lower hardware capabilities than the current PlayStation 4 and Xbox One. This suggests that even with all the improvements made, the Silk Engine (derived from Sony's PhyreEngine, recently seen only in smaller titles like Below and Unravel) isn't quite up to par with the latest advancements in engine technology. Indeed, those who have played The Technomancer, Bound by Flame and other titles by Spiders will recognize some telltale signs, such as the map verticality that is still bound to contextual actions to climb and descend instead of being freeform and seamless as in virtually every other game these days.

There is a day and night cycle (though no dynamic weather) and NPCs roam the cities in a rather believable fashion. That said, not only do they not enter buildings seamlessly, you will always find them in the exact same places unless some quest requires them to be located elsewhere.

Given that the next-generation of hardware is fast approaching, it would be probably best for the studio to take the chance and jump to something like Unreal Engine technology to be more competitive in the future.

Still, as mentioned before, the improvements made here are just enough to avoid breaking the all-important suspension of disbelief, most of the time anyway. Just as well, as the fantasy world depicted in GreedFall deserves all the attention as it is one of the most original and refreshing settings recently seen in RPGs. 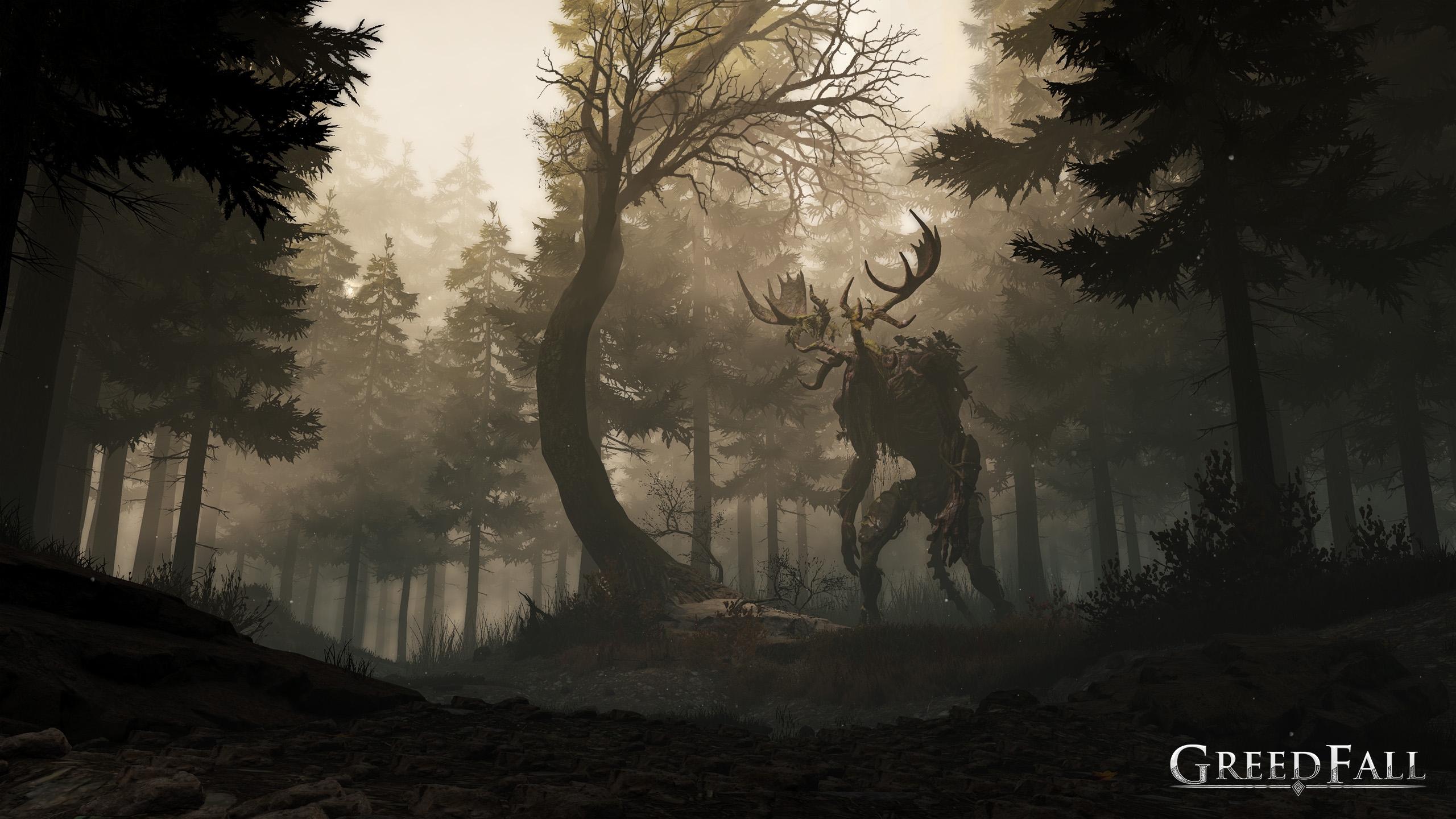 Whereas almost every fantasy roleplaying game is loosely based on medieval times, GreedFall is set in a world evidently inspired by the 17th century Europe. Players (who are able to customize their character's gender, again a first for a Spiders game, and appearance at the very beginning) will control De Sardet, a legate of the Congregation of Merchants, a nation that is neutral in the ongoing fight between the Middle Eastern-inspired, science-focused Bridge Alliance and the theocratic, magic-empowered state of Thélème.

People in all of these factions are suffering from an incurable disease known as the Malichor. With the recent discovery of a mysterious island called Teer Fradee (possibly inspired by Celtic mythology), populated by magic-wielding natives and never-before-seen flora and fauna (including massive creatures), De Sardet sets sail with an expedition to try and find a cure for the Malichor.

GreedFall deals well with sensitive themes that are at high risk of becoming controversial, such as colonialism and the exploitation of nature. The titular greed is often displayed by some of the 'invaders', as one would expect, though not everything is black and white as befitting of a complex, believable narrative. Indeed, the writing is among GreedFall's strong points and that extends to the five companions (although only two can be used at once) that make up De Sardet's party.

Each one of them has an interesting backstory to be learned via personal quests, and they've all got their own opinions as well, which have to be considered if you want to remain in good standing with them while making choices (which ultimately lead to multiple endings) during all kinds of quests. Should the relationship with a companion develop further, you'll even get the option of romancing said companion. Each companion also provides a bonus Talent Point (Charisma, Science, Crafting, Lockpicking, etc.), but that's only the case if you are in a 'Friendly' status with them.

Indeed, in his brief Gamescom hands-on Dave mentioned similarities with BioWare's Dragon Age and he was not wrong. As in that franchise, you'll also get to manage and improve the equipment of the whole party to make sure they are most effective in combat.

Furthermore, there is a tactical pause that can be activated at all times, an excellent way to make sure you are hitting the right target when there are multiple foes lumped together. However, unlike Dragon Age, there is no isometric 'tactical camera' providing a bird's view to the action. In my opinion, though, the worse shortcoming is that you can't ask your allies to focus on a specific target. This would have surely made some fights much less frustrating.

Overall, enemy AI in combat is quite challenging, at least on the Hard difficulty (there are four difficulty settings, by the way, in an obvious attempt to cater to any fan from the most casual to the most hardcore). Of course, this is no Dark Souls, but then again it wasn't meant to be. Combat was already quite solid in the previous titles by Spiders and it's even better here.

Other than the direct confrontation, GreedFall also has a stealth system, though it is a bit rough compared to what we're used to in 2019. Still, it can be useful when it works to get a stealth attack in to begin the fight. Furthermore, a disguise system is employed while infiltrating certain off-limits areas, such as those belonging to the guild of the Nauts (the sailors of the world). This is another area where the game shows the aging tech underneath, as once you've put on a sailor coat no NPC will literally bat an eye while you rummage through chests and go into the private rooms of superior officers. Other titles handle this gameplay concept much better, for example requiring players to maintain a certain distance to avoid closer inspection and, therefore, identification. 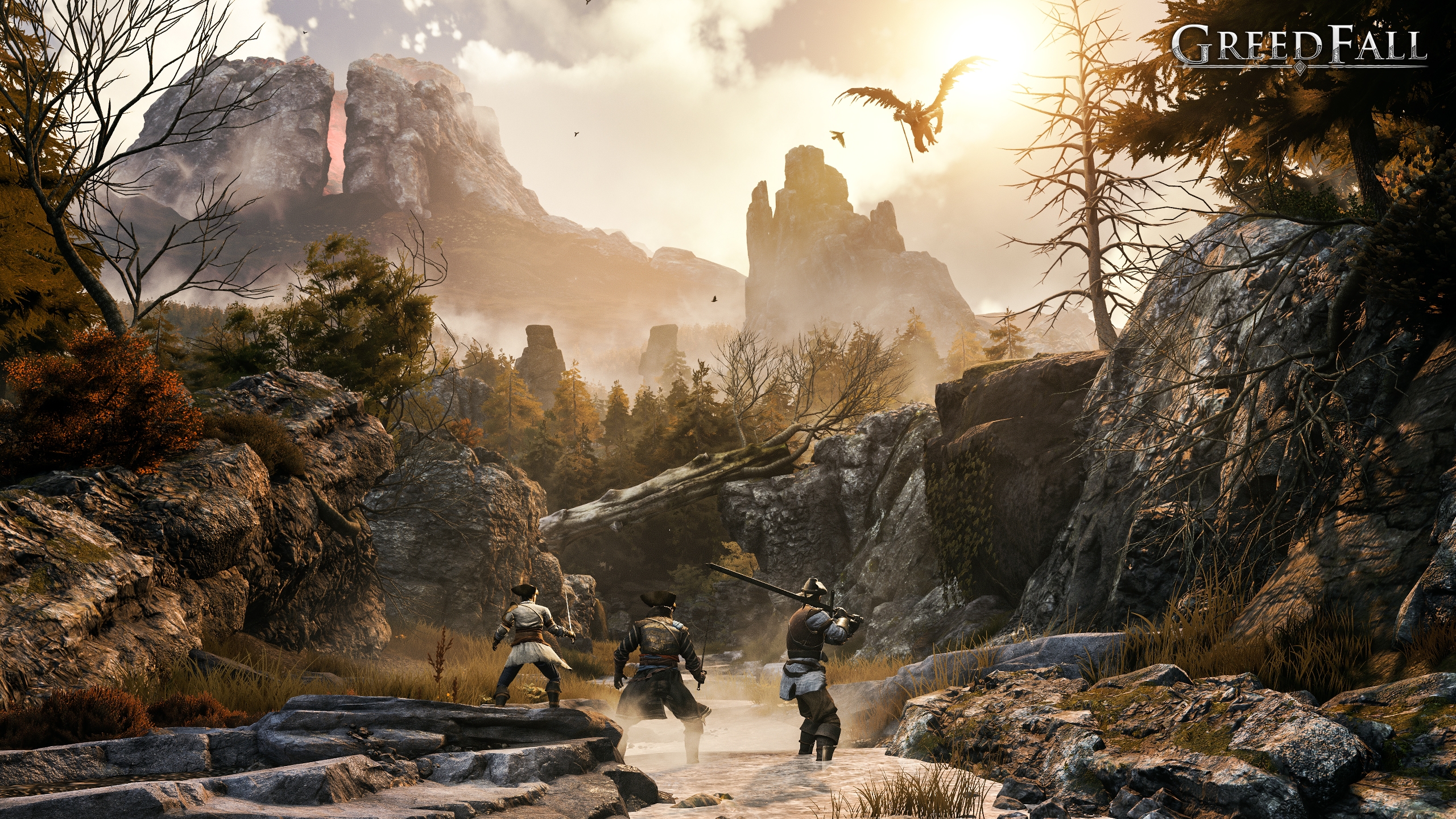 Crafting in GreedFall is mostly dedicated to enhancing your existing equipment via a socket-like system. As in virtually any other RPG, players will gather the necessary sources while exploring the world before crafting is possible. The nice touch in this game is that each modification to, say, a chest piece also modifies the appearance of the chest piece in its own way.

Character progression is effectively freeform, which is great in any RPG. While the game initially asks you to select between tree standard 'classes' (Warrior, Technical, Magic), after that you have the complete freedom to unlock Skills, Attributes, and Talents as you please, thus forging your own playstyle. There's also the chance to reset all of them, as long as you have crystals, if at any point during the game you feel like changing your mind.

Offensive magic is linked to equipping the so-called Divine Magic rings to one of the weapons slots, while you don't need to do that for healing spells or crowd-control spells like Stasis. Melee weapons (only one-handed are available at first, you'll have to unlock two-handed weapons) are divided between blades and heavy weapons (essentially swords and maces), with the former fit for dancing around the opponents and the latter well-suited to crushing them outright.

Beyond the self-explanatory Warrior and Magic presets, for those interested in less conventional (at least for fantasy RPGs) ways of dispatching enemies there's the Technical one focused on firearms, which are very powerful but take some time to reload, and traps.

I do have a complaint with regards to the distribution of Attribute Points in GreedFall. While Skills are never a problem (if you roam the various regions, there are plenty of Skill Altars to be found, each of them granting De Sardet an extra Skill Point), you're only getting one Attribute Point every few levels with no other means to improve Attributes. This is rather aggravating because the developers decided to tie Attributes to the best equipment in each category.

In other words, if you've made a jack-of-all-trades character that is for example both a brawler and a magic user, thus having to spread Points in Attributes like Strength and, you'll never be able to wear the best melee weapons or magic rings due to lacking the necessary Attributes requirements. This could be fixed by simply granting Attribute Points more often and I expect this might be a kind of feedback that Spiders will get a lot once the game is out. Hopefully, a patch will balance this progression issue.

An average playthrough of GreedFall should last between thirty and forty hours, in case you're wondering, which is more than adequate once you factor in the $50 pricing, a middle way between budget ($40) and triple-A ($60). As always, your mileage might vary depending on how many side quests and companion quests you undertake. 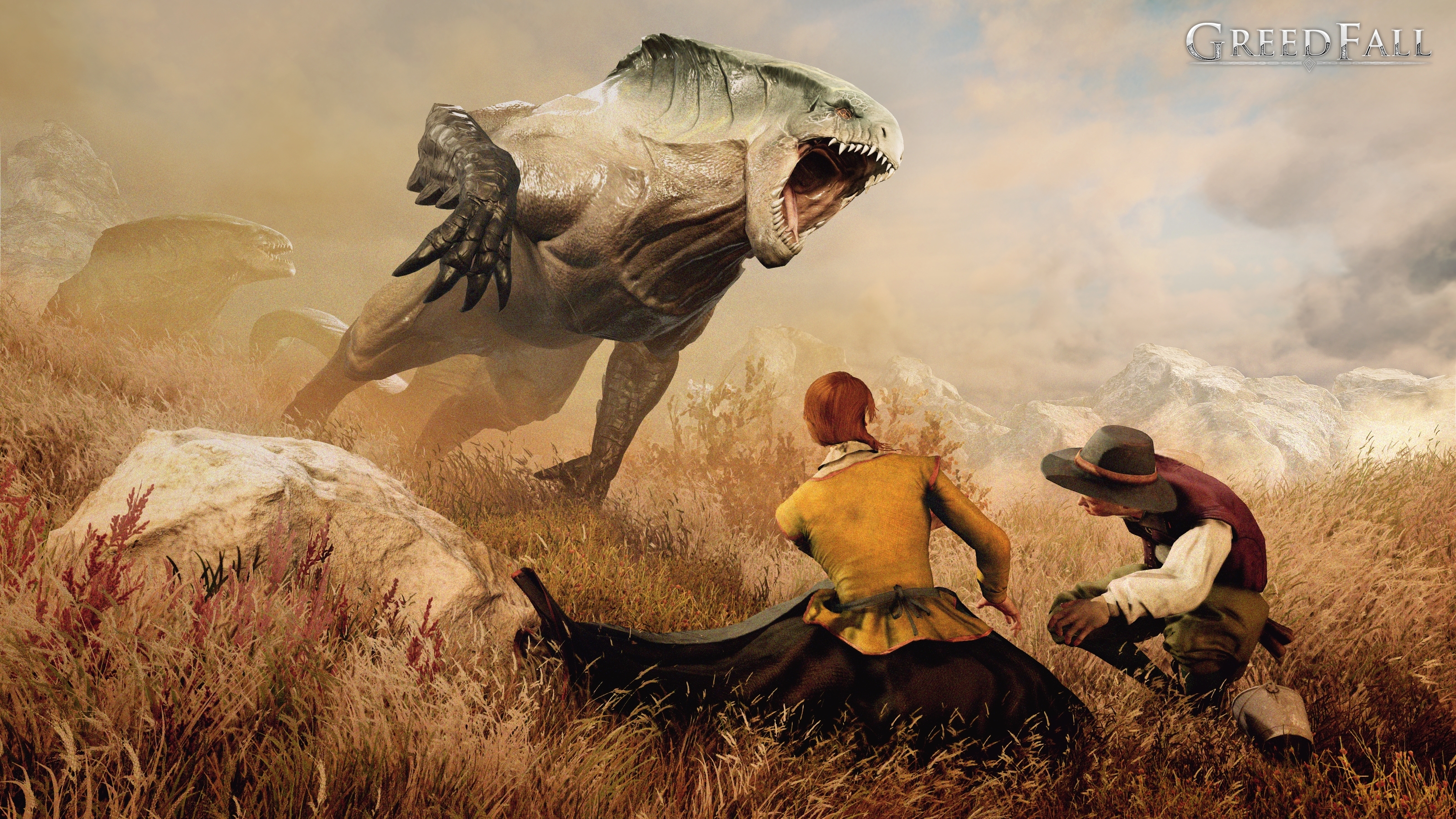 From a technical standpoint, GreedFall looks good. It doesn't beat the likes of The Witcher 3, of course, but everything from the cities to the environments and the character faces are detailed enough to be pleasing to the eye, partially thanks to the artwork. Facial animations are particularly noteworthy in a relatively low budget title like this and the very same can be said about voice acting.

Performance isn't worthy of similar praise, though. On a high-end PC (Intel i9 9900k CPU, GeForce RTX 2080Ti GPU), running at 4K resolution with max settings can be a choppy experience in some areas of the game. There is a slider to tune down the dynamic render resolution, which makes it a bit smoother at the expense of image sharpness.

As a last note, there is no support for High Dynamic Range (HDR) displays on PC, which is sad as the console versions of GreedFall have this feature and these days, there really is no reason to cut this on PC when practically every game featuring it on console also supports HDR on computers. Again, we can only hope the developers will at least add it in a post-launch update.

Reviewed on PC (code provided by the publisher). You can purchase a Steam copy at a 13% discount via Green Man Gaming.