Sometimes it’s good to be bad. Sure, James Bond is cool and all, but occasionally you’d rather be Ernst Blofeld commanding lackeys, torturing spies, and petting Persian cats. The original Evil Genius aimed to fulfill that fantasy, allowing players to design their own elaborate supervillain lair. A sequel was supposed to happen back in the mid-2000s, but series developer Elixir Studios went out of business. Thankfully, the IP is now in the hands of Rebellion Developments, who are finally delivering Evil Genius 2: World Domination a decade and a half after the first sequel died.

Of course, a lot has changed over the past 15 years. Does Rebellion’s dastardly plan still hold up or is Evil Genius 2 a big Dr. No? Shine up that villainous monocle, it’s time to take a closer look…

Much like its predecessor, Evil Genius 2 follows a pretty simple loop. Build up your den of infamy by carving out various specialized rooms, from barracks to research labs, to your own inner sanctum, and outfit them with various helpful items. These additions will allow you to attract more minions, train them in various specializations, develop new tech, better safeguard your lair with devious defenses, and expand your ability to carry out a variety of lucrative schemes via the world map. Eventually, build yourself a doomsday device and take over the world!

While the Evil Genius formula remains largely unchanged, a few tweaks have been made -- you no longer start your criminal career on a featureless desert island. After you choose your genius and locale, you begin with your cover casino already set up, allowing you to focus on the behind-the-scenes stuff. Evil Genius 2 offers three islands to build your lair on, but the choice doesn’t feel terribly meaningful. Each of the game’s four geniuses has a pair of semi-useful powers to use and a unique doomsday device to pursue, although they too feel rather samey – I tried out both the Dr. -Evil-esque Max and the mad scientist Zalika, and the experience wasn’t all that different, with both characters outright reusing most of their lines during cutscenes.

Of course, Evil Genius 2’s visuals have been updated, with Rebellion opting for a Fortnite or Team Fortress 2 cartoony aesthetic. Make sure to zoom the camera in occasionally, as your minions’ animations are surprisingly detailed, and each type of room has a unique look to it. That said, don’t expect anything too mind-blowing – overall, Evil Genius 2 looks a bit cheap compared to other Rebellion games, particularly during cutscenes, where no effort has been made to sync dialogue to animations. It seems like Rebellion’s main focus was creating a game that would run on a wide variety of machines.

Evil Genius 2’s interface is also rather old-school. The isometric angle the game is played at makes carving out rooms and placing furniture a bit awkward and the default method of fine-tuning the camera – by holding down the scroll wheel and dragging it around – takes some getting used to. The UI doesn’t provide any information or tips when you hover over things as most modern strategy games do, and there’s no built-in guide (an Evilpedia if you will) to help you brush up on basics. A variety of other little irritations give away Rebellion’s lack of experience with strategy games – you’re not told how much a room you’re creating will cost until after you’ve plotted it out, item placements are often deemed illegal with no explanation, and you’re constantly peppered with annoying prompts about common things.

Ultimately though, this game’s biggest issue is one so many villains have to contend with – your minions are complete incompetents. No matter how many times you upgrade them, they’ll still let enemy agents saunter right by them, and they don’t take the initiative as they should. Engineers will leave key equipment unrepaired, guards won’t bother to monitor security cameras, and it seems scientists would rather be doing anything but researching. This wouldn’t be so bad if you could jump in manually command your proles, but it isn’t really an option. You can assign a broad focus to an individual minion, such as telling an engineer to target repairs, but you can’t say “go fix that malfunctioning power generator that’s about to start on fire and burn down half the base.” What good’s being a supervillain if you can’t even get your own grunts to do what you want?

While Evil Genius 2 doesn’t let you micromanage certain aspects of your operation, it forces a lot of rote decision making on you in other areas. Most notably, the game makes you return to the world map constantly to launch new schemes rather than just setting a priority for each of your criminal networks (“Make Money,” “Avoid Attention” etc.) By the time I had over a dozen outposts, it became too much to keep track of and I mostly stopped paying attention to the world map except when a mission objective specifically required it or I was running low on money.

The issues touched on in the previous few paragraphs really come to a head when you’re dealing with enemy agents. If you’re hoping for Bond-style games of cat-and-mouse, you’re going to be disappointed. Early on when your defenses are weak, groups of enemy agents will constantly infiltrate your lair and wander around at will, which is ultimately not a huge deal as they don’t really do any damage. As your infamy level increases more powerful enemies will show up, including Super Agents that can fill your halls with body bags if you try to take them on. If you do decide you want to kill some agents, you have to individually tag the tiny baddies and just hope your guards do their job. More in-depth battle plans aren’t really a possibility. Personally, I suggest you just avoid fights as much as possible – as mentioned, enemies are totally toothless to start and later on it’s just easier to replace whatever they steal or sabotage rather than risking your grunts’ lives. I dunno, I feel like something’s gone a bit wrong with your supervillain sim when pacifism seems like the best option.

Don’t get me wrong, Evil Genius 2 did provide me with some enjoyment. Building up your base and watching your minions scurry around like little disposable ants is fun, it’s just never particularly challenging and doesn’t really deliver the “be a Bond villain” power fantasy it promises. Playing through a single game of Evil Genius 2 will take you a solid 15 to 20 hours, but I’m not sure how many times the average player will return. This time around Rebellion is offering a new Sandbox mode, which allows you to build up your base in peace, and honestly, just playing this game as The Sims with the occasional deadly shark tank may actually be the most satisfying approach.

This review was based on a PC copy of Evil Genius 2: World Domination provided by publisher Rebellion Developments. You can grab the game at a small discount at Green Man Gaming. 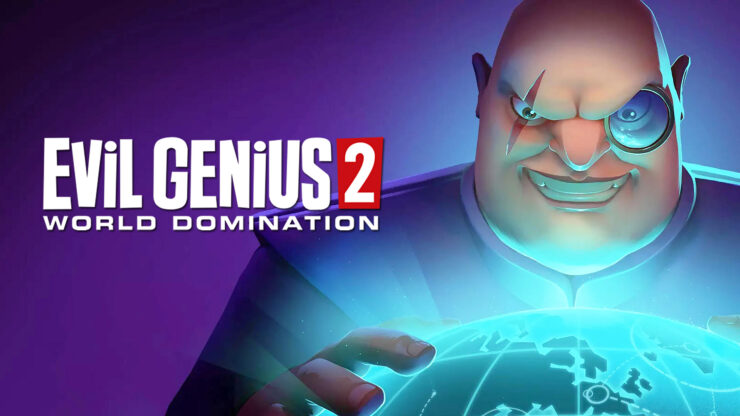 Evil Genius 2: World Domination has a certain nostalgic charm, and not just because of its retro 007 stylings. It feels like something you might have found on your dad or friend’s computer back in the Windows 3.1 era and sunk a few diverting hours into. Unfortunately, a lack of depth, challenge, and modern features makes the game hard to fully recommend in 2021. Some fun can be had if you keep your expectations in check, but don’t count on Evil Genius 2 taking over your world.