Crayta is a build-your-own-game game. Like Dreams, like Garry’s Mod, like Project Spark before it was shuttered, anyone interested in Crayta should be interested not just in playing games, but attempting to construct them. The main difference between Crayta and the others a focus on multiplayer games and multiplayer game making, utilising the Stadia’s State Share Beta to make inviting anyone to help you build, test, or play your game easy. And this makes it quite difficult to summarise.

It looks a little like Fortnite, with its smooth animations and colourful, eclectic character and level design. This similarity feels even more compounded as you unlock heaps of emotes as you play. But instead of dropping from the Battlebus, you’ll be asked to try one of the many pregame games that Crayta comes loaded with. These games were built not just by Crayta’s creators (some of the folks who previously worked on the now-defunct SkySaga: Infinite Isles), but by other studios experimenting with the platform.

These premade games showcase the kind of experimental and abstract party games Crayta might be able to foster. Although none are particularly engaging if you’re on your own, each is a bizarre adventure when the lobbies are full. Huddle for Warmth, for instance, is a group trek over an icy tundra where players quickly perish from exposure if they aren’t huddled close together. Exploring the environment together is hilarious as pitfalls and distracts quickly separate the players and force you to work together and most importantly communicate in order to survive. Another one titled Prop Hunt is a small asymmetrical multiplayer experience where one player takes the role of the hunter who has to scour an office space for the other players. The problem is, the other players can all transform into random props that are randomly scattered around the level. The hunter has to try and remember the layout of each room for discrepancies and spot any chair that might be making a dash through for the bogs. Each round is only a couple of minutes long, but Prop Hunt still manages to build an incredible sense of tension and excitement that you would expect from a full title.

And there are other games too, farming games, cooking games; team-based shooters and adventures. Each has some twist on its genre that makes it interesting and worth exploring, as long as you're not alone. For players that aren’t interested in trying to make their own games, the fact that Crayta’s premade library of games can’t be enjoyed alone might be a little off-putting.

For those that want to make their own games, however, Crayta is at once a formidable beast and an interesting prospect. The games on offer highlight some of the frankly astounding variety that Crayta allows, but when you get your hands on the wizard behind the curtain you’ll understand why. It's probably safe to assume that nearly everyone who has played games has fantasied about making them at some point, much in the same way that the most avid readers have once or twice imagined publishing their own book. Crayta gives you the chance to try that out, but it also doesn’t shy away from the work you’ll have to put into it.

The developers have pre-emptively released detailed guides that will help you get to grips with the basics and offer advice for more advanced scripts and codes so that any skill level can find something useful in the library. But even with them, the editor mode can look more than a little overwhelming for anyone that doesn’t have a lot of experience in the field.

But despite that, it only takes a little while before you have at least some handle on the situation. You’ll feel like a coding master when you turn your blank canvas into a cel-shaded blank canvas, even if it’s all done in a dropdown menu. Persevering through these small first steps, you will eventually have something that clicks, as long as you keep experimenting.

Like Dreams, Crayta is more than happy for players to collaborate to build whatever they want. In this case, that comes in a variety of ways. Some helpful strangers might upload scripts that you can use in your game. Crayta comes with a few of these to start with, such as scoreboards and opening doors, so you don’t have to struggle making the bones of your game, but as more players get their hands on the game, we’ll hopefully see more interesting, niche, or creative things added to the library. These also offer a good chance to understand the code you might wind up playing with, for those brave enough to do so.

But on top of that, Crayta also lets you invite people into your workshop to help you shape whatever game you’re hoping to build. This can quickly transform a group of friends into a makeshift studio as some might be more comfortable in one role than another. It's also obviously a feature that Google and the team behind Crayta are hoping will appeal to streamers who can invite their audience into the game to make something and then play together without having to connect through friend lists. This leverages Stadia's State Share Beta which is included in Crayta at launch. It basically means that a game can be shared and immediately accessed through nothing but a link. It's a smart tool that makes connecting with friends or showing off one game or another incredibly easy and innovative with the time I had to experiment with the system. The Stadia system itself seems to be at the heart of the Crayta's design, with a huge focus on fast and seamless sharing and playing. Being able to drop a link in a Discord server and have the game associated with it immediately populated is a fantastically simple way of bringing people in Crayta and will hopefully help establish a community of game creators and players. Crayta will also come with a host of reporting and moderation features too, as the developers want to be proactive in creating a supportive, inclusive community around the game.

After several hours, I’m still barely getting to grips with the basics as I work to digitise a simple D&D adventure I created for the pen and paper game. I want to make it clear that despite the help Crayta provides, creating your own game is not going to be easy. Even with friends, you’re probably going to struggle more than once.

But even when you’re stuck trying to make your dragon fly more dynamically across the sky, you can always jump into a game of Prop Hunt or explore the players' library to get inspiration or respite from the rewarding, challenging work. Oh, by the way, Crayta is launching as a free title for Stadia Pro subscribers. 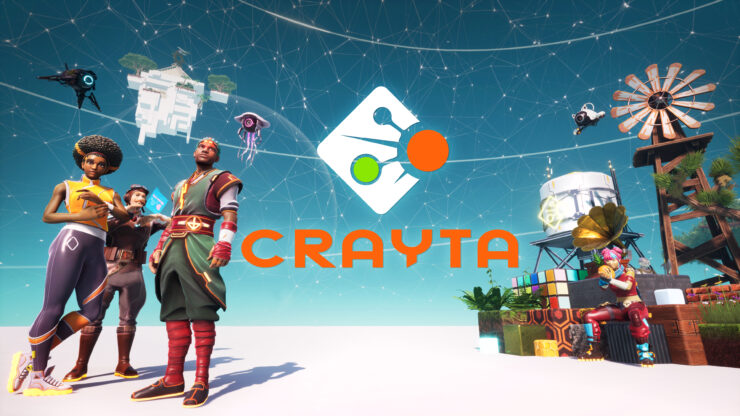 Crayta is yet another game that serves as a platform for user-created content. Despite the competition, it still manages to stand out and not just because the game is on Google Stadia. With its focus on multiplayer experiences and experimental design, this could become a fantastic library of titles once the community starts generating its own products.