The ASUS ROG Zenith Extreme Alpha is one aggressive looking motherboard which has enthusiast written all over it. Rocking a seriously impressive design, the motherboard follows the E-ATX form factor and the black theme across the motherboard looks very neat. 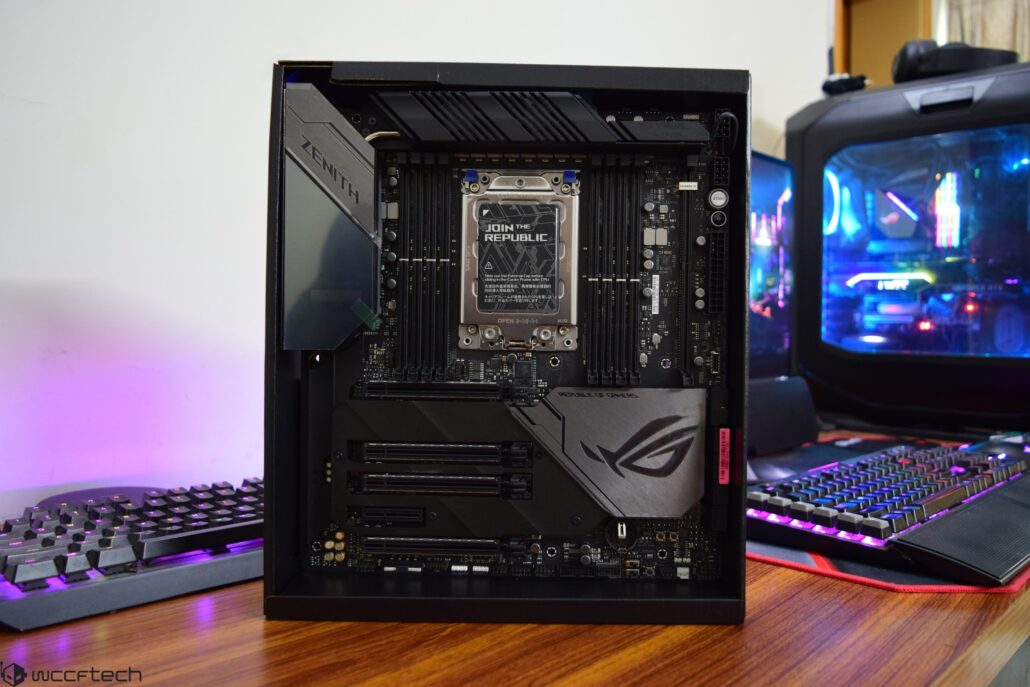 A lot has changed over the first ROG Zenith Extreme. The most obvious changes are the cooling design, the VRM upgrades and the flashy cover that goes across the PCH and the PCI-e slots. The motherboard also makes use of two aluminum heatsink covers on the back along with flashy LEDs on the bottom for a nice aesthetic look. 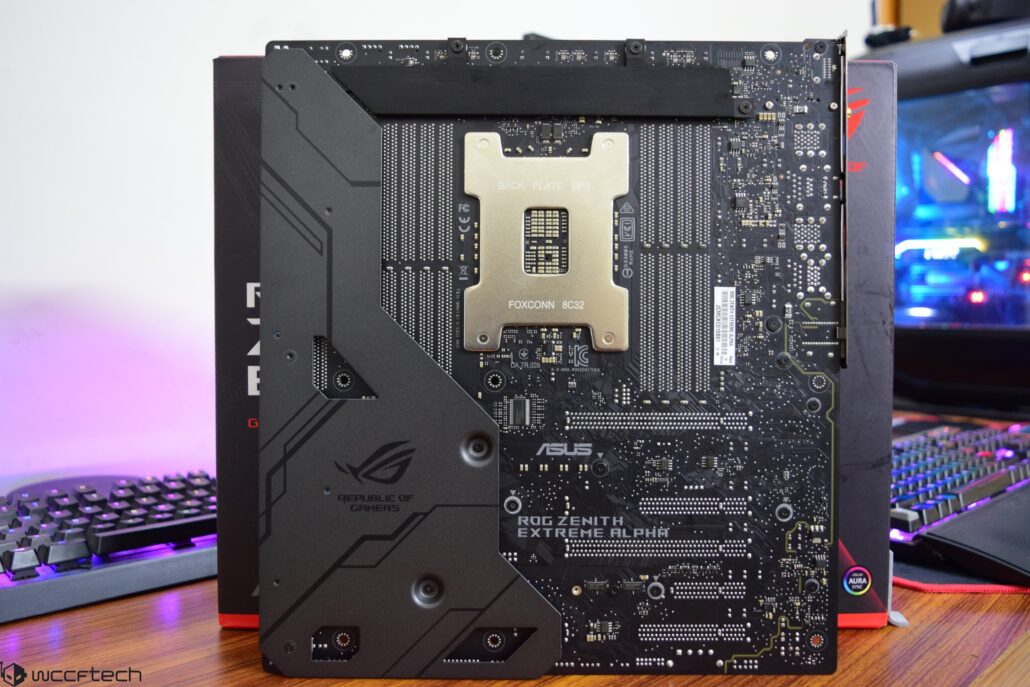 The large TR4 socket can be seen at the top of the motherboard. The ROG Zenith Extreme rocks the Foxconn SAM SP3 design which looks similar to the EPYC SP4 socket but re-engineered for the HEDT masses. The socket has a plastic cover that slides in and out with ease. The AMD Ryzen Threadripper processors also slide in the socket with ease after removal of the protective cover.

All X399 motherboards are shipped with this cover since we are talking about 4094 pins and one damaged pin can cause permanent damage to the board. The ASUS ROG Zenith Extreme Alpha has a very catchy sticker over the plastic cover with "Join The Republic" label. ASUS is very serious about their ROG design on this motherboard since it's one of their flagship designs. 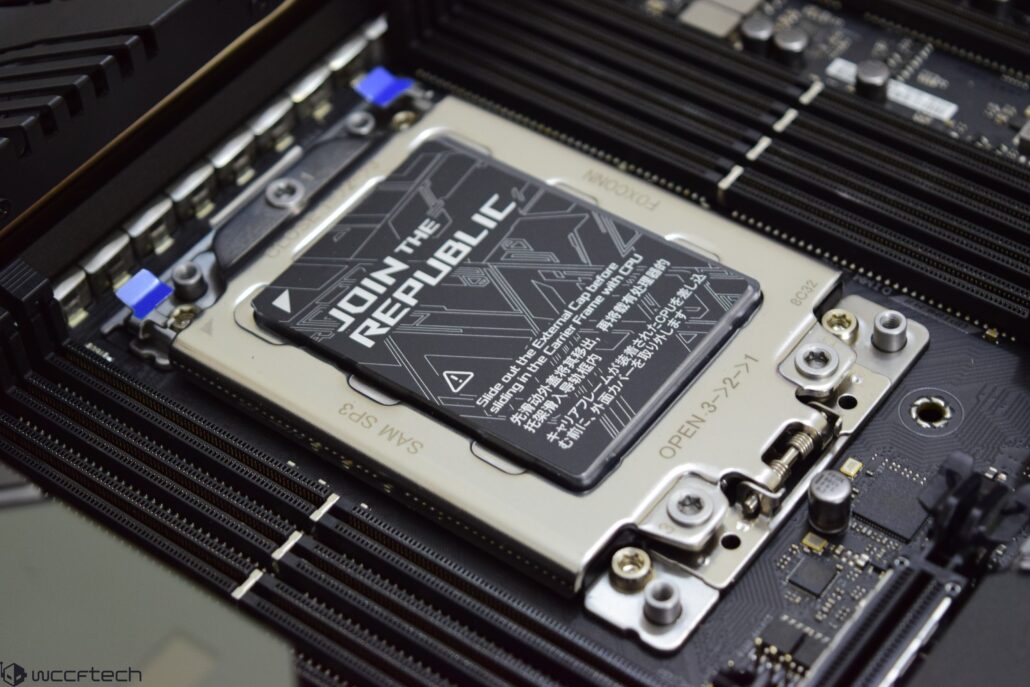 Talking about the socket, it is also the largest ever designed for a consumer grade motherboard and the number of pins inside the socket is mind-blowing. You can fit in almost four consumer Intel CPUs in the socket (although they won't work).

Around the socket are two DDR4 DIMM slots which can support quad channel memory with clock speeds up to 3600 MHz (OC+). The system is designed to operate both non-ECC and ECC (UDIMM) memory and up to 128 GB in capacity. The motherboard supports XMP memory modules like the ones I tested the board with. 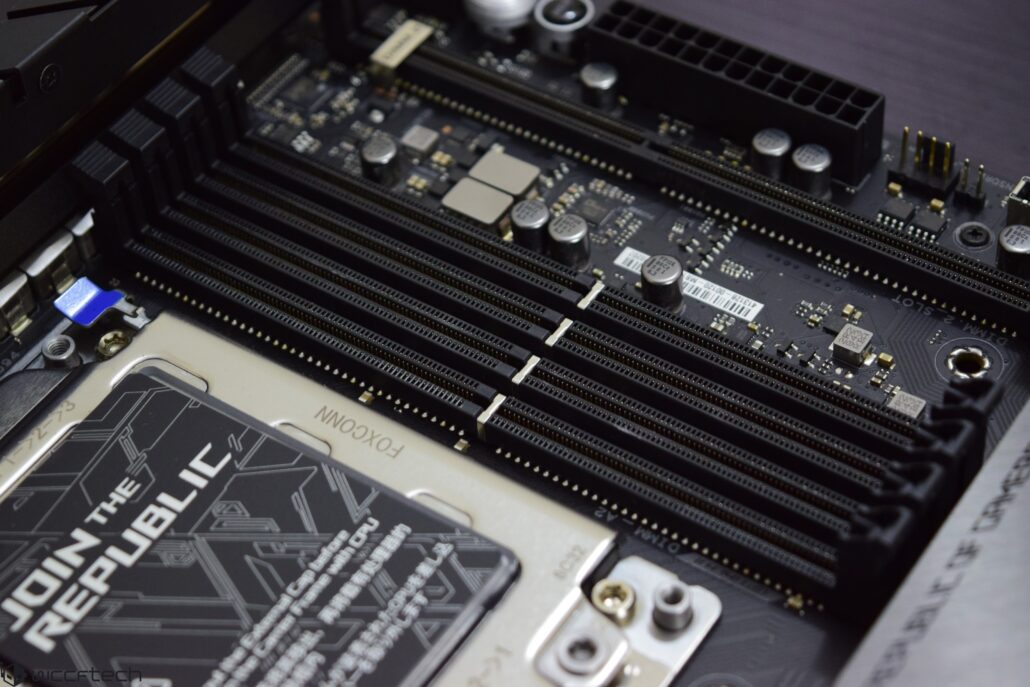 Right next to the DDR4 DIMM slots on the right side of the socket, you can see a single DIMM.2 slot which is conveniently labeled so users don't install a DDR4 stick inside it, causing damage to their hardware. The DIMM.2 slot can house the bundled ROG DIMM.2 stick which allows for two extra M.2 drives.

Scattered around the CPU socket is 16 power stages that are spread over eight phases. The power delivery system is a combination of high-quality components that includes premium chokes, high-end capacitors, and IR3555 PowIRstage components rated at 60A for higher power delivery to offer stability and better-overclocking potential on Ryzen Threadripper series processors. The board is using the IR 35201 voltage controller and in addition the 16 CPU phases, there are four phases for the SOC (X399) and four (two each) for the memory.

The motherboard is supplied power through dual 8 pin connectors that are located just right over the 24-pin ATX power connector. This is due to the large heatsink that covers the entire top portion of the motherboard. The board has enough juice to feed the high-end 32 core Ryzen Threadripper CPUs such as the 2990WX. The Start and Reset switches are also located between these connectors and can easily be accessed. 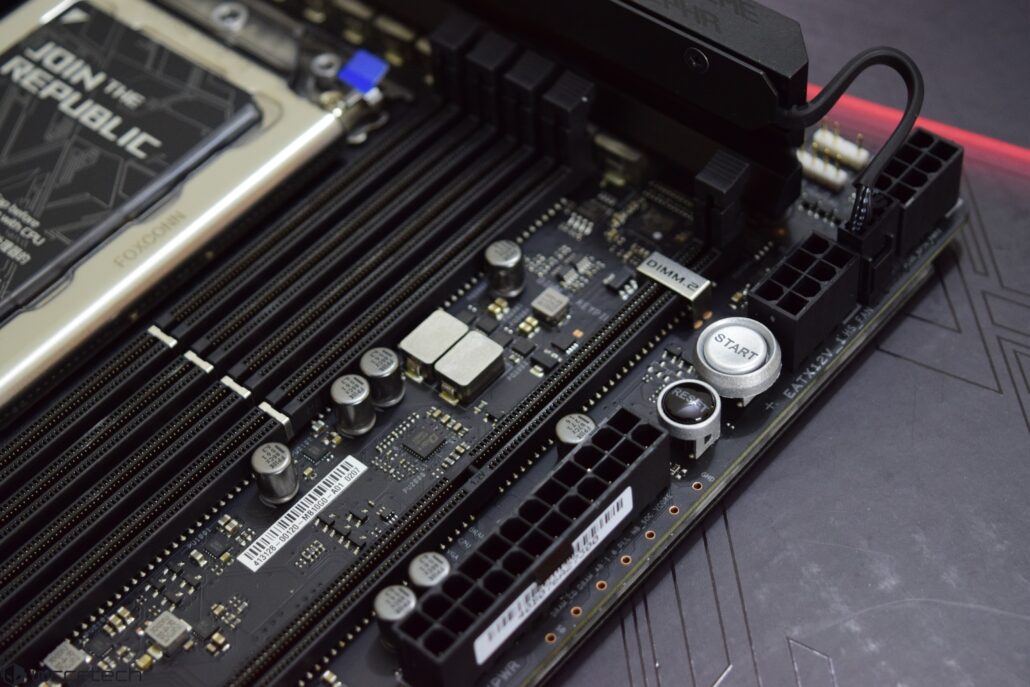 The biggest upgrade aside from the VRMs is made on the cooling system. ASUS is using their most impressive cooling design to date on the ROG Zenith Extreme Alpha which makes use of two fully aluminum-based heatsinks with one featuring fin design and covering the entire top section of the VRMs. There's an extended heat pipe that runs through the top heatsink to the one which features the I/O cover for even higher cooling potential. 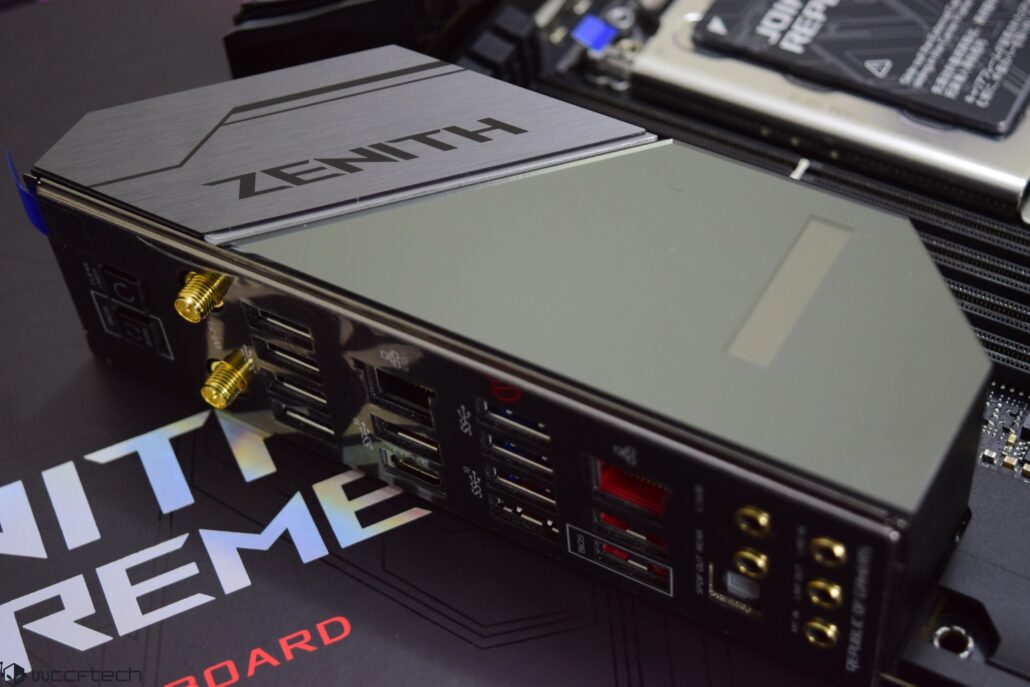 The I/O cover is made out of aluminum and connectors to the primary heatsink through the heat pipe, offering higher mass and surface area for the VRMs to dissipate heat to. In addition to all of that, the top heatsink also comes with active cooling in the form, of two fans that feature idle fan functionality and only kick in when the temperatures on the VRMs cross 60C. The Extreme Alpha is said to handle a sustained VRM load of 500 Watts which is quite impressive. The fans are already connected to the motherboard through a 4-pin cable so you don't have to worry about them at all.

The I/O cover has a large Zenith logo and comes with its own set of LEDs that are synced with ASUS AURA Sync technology. The I/O cover even comes with a small OLED display which shows some info such as CPU clock, CPU temperature, fan speed, etc. This feature was brought over from the original Zenith Extreme. 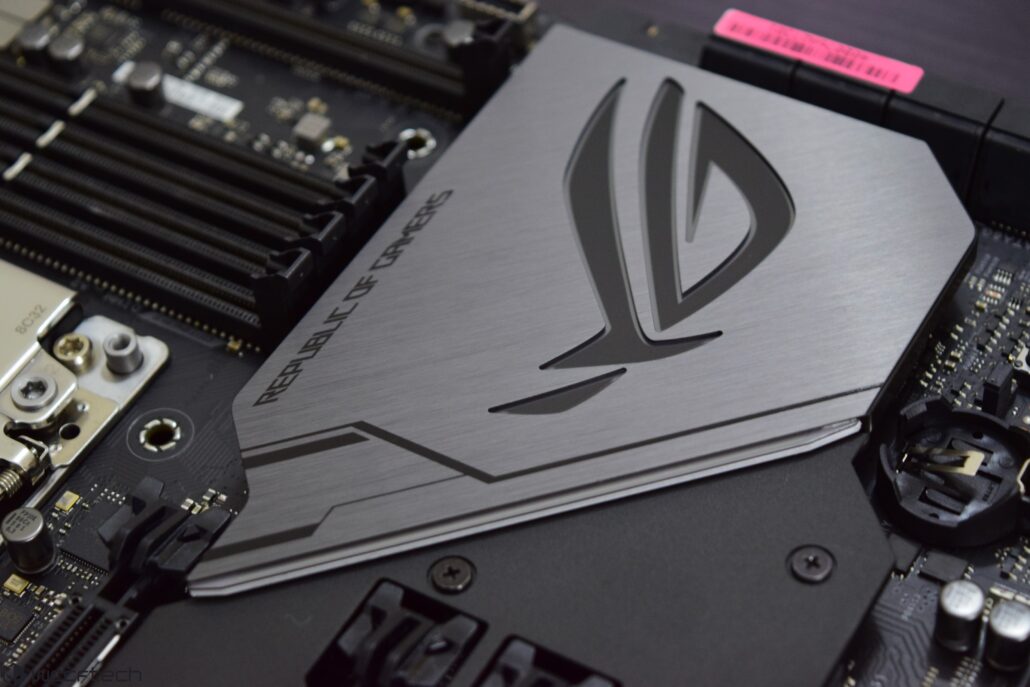 Coming to the bottom side, we see the PCH heatsink which also uses aluminum and features the ROG eye logo that illuminates through LED when in sync with ASUS's AURA Sync technology. The motherboard also has a SOC heatsink in addition to the PCH heatsink which is located right below and offers more cooling to the power delivery system on the lower section of the motherboard. It also packs an aluminum heatsink cover for the M.2 drive (1 in the case of the Alpha). 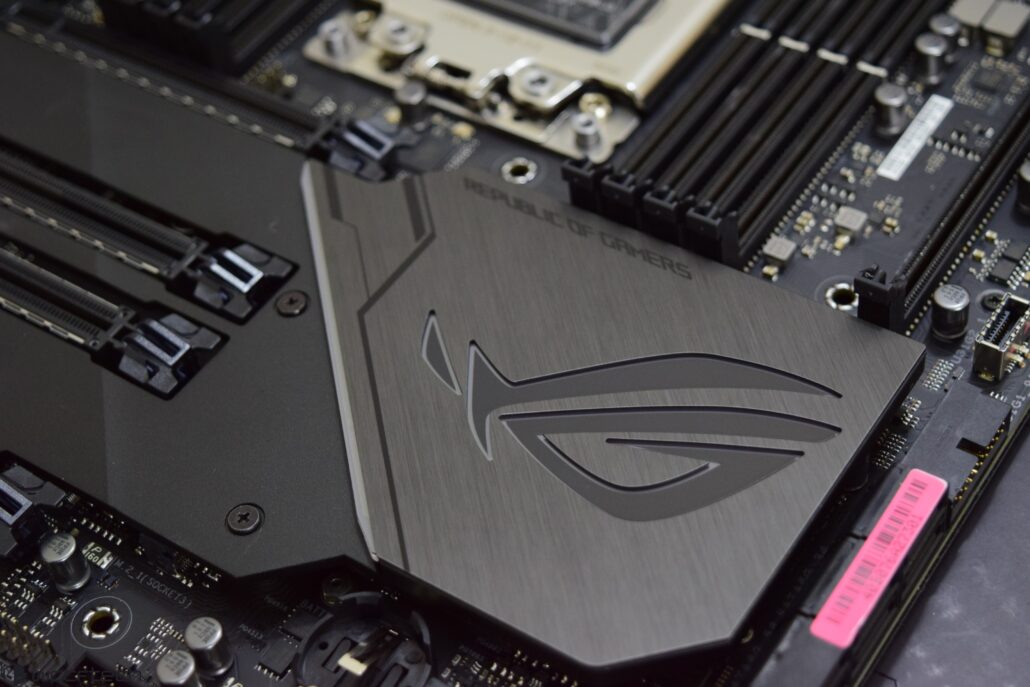 Just right below the PCH heatsink, I can spot the dual BIOS chips which are a key feature of the motherboard. For those whose motherboard may go haywire after a certain change in settings within the BIOS, you can easily switch to the reserved BIOS and revert the settings for easy configuration and tweaking.

There are several switches and jumpers to select between the BIOS and the different modes (Slow Mode, LN2 mode) along with a retry button and a safe boot button. 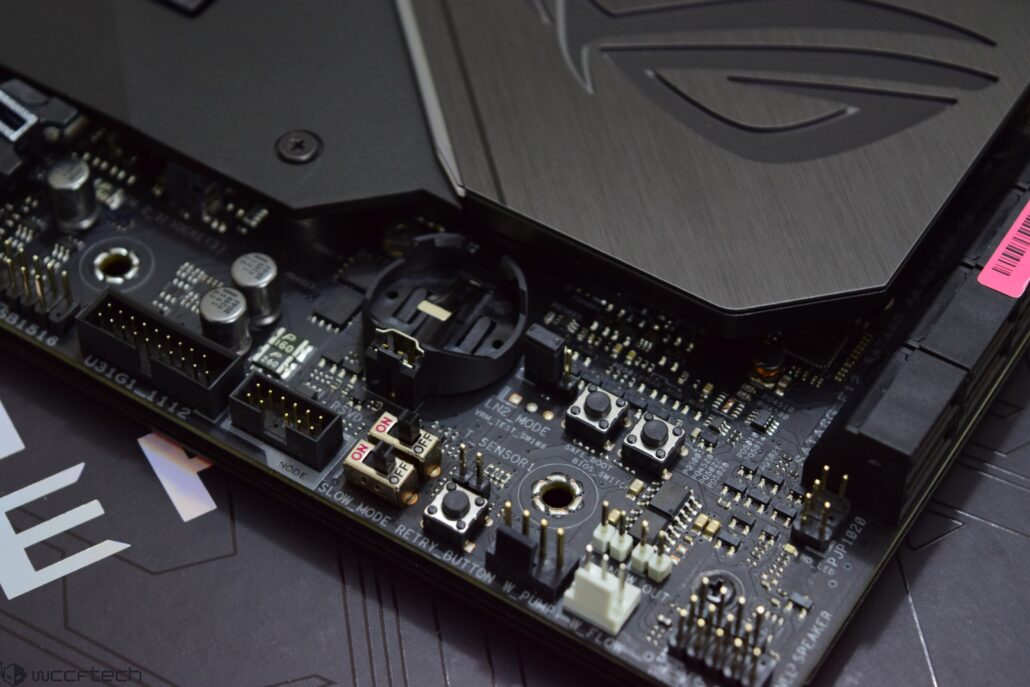 In terms of storage, we are looking at 8 SATA 3 6Gbps ports which support RAID (0,1,10) and has been free by AMD for a while now. There are also two USB 3.0 front panel headers, one of which comes in right-angled design right next to the SATA ports. The board has a node connector for the fan extension II hub and a USB 3.1 Gen 2 front panel header too. 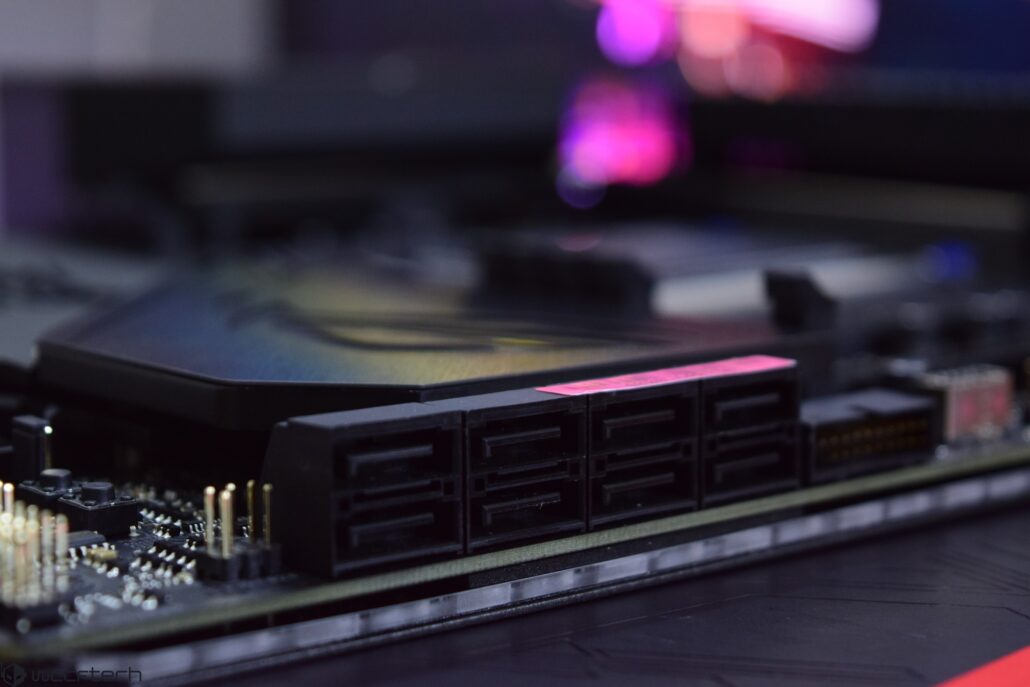 The motherboard has a 4-pin ATX connector located at the bottom left side which offers additional power to the expansion slot which is the next thing I am going to be looking at on this board. 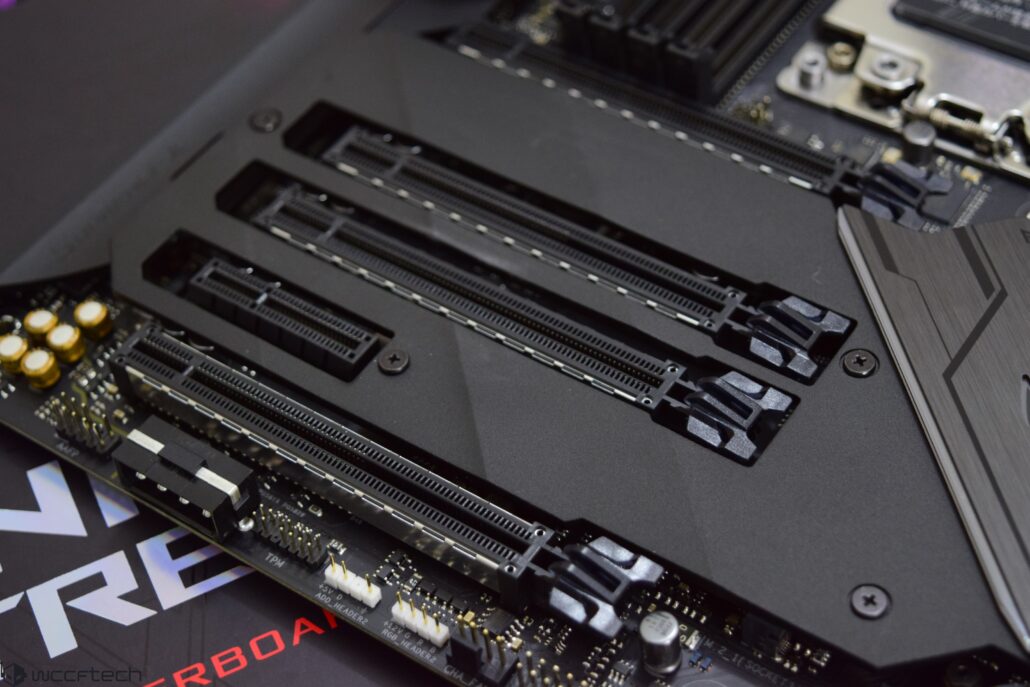 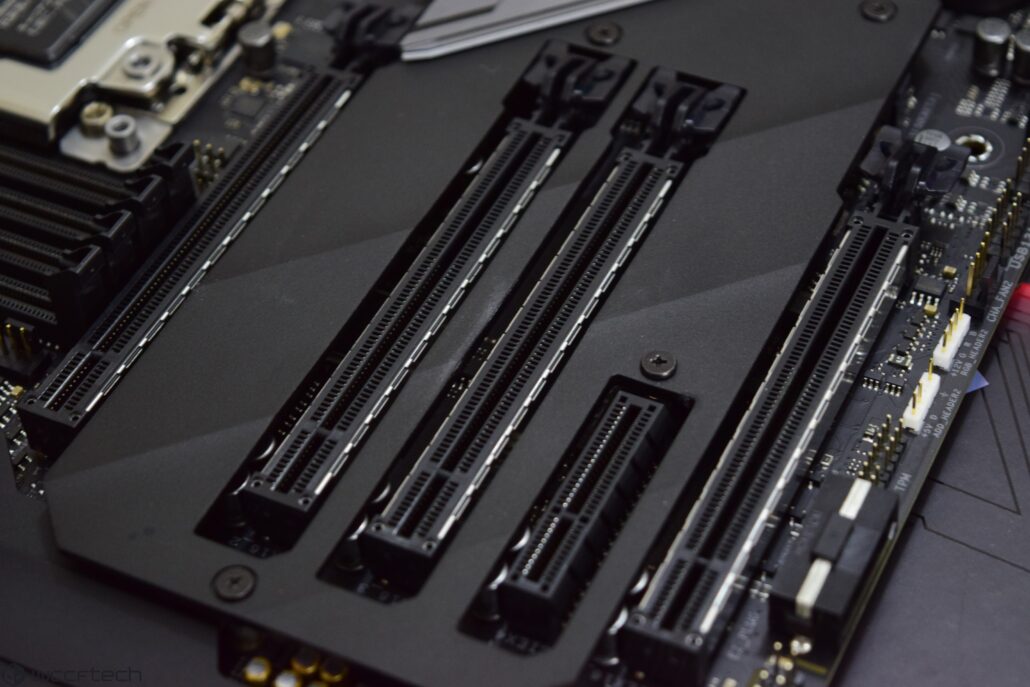 ASUS is using their Q-slot design on the PCI-express slots which adds more strength to the slots when using heavy graphics cards. The feature not only adds a stainless shielded cover to the PCIe slot but also provides more anchor points for extra strength against higher retention force.

The motherboard can house 3-way SLI and Crossfire GPUs. Whether if those are practical or not is up for debate but considering the use case of this motherboard, we can see some workstation heavy enthusiasts going for quad way NVIDIA Quadro or AMD WX series graphics cards in a system designed with such a high-end CPU and motherboard. 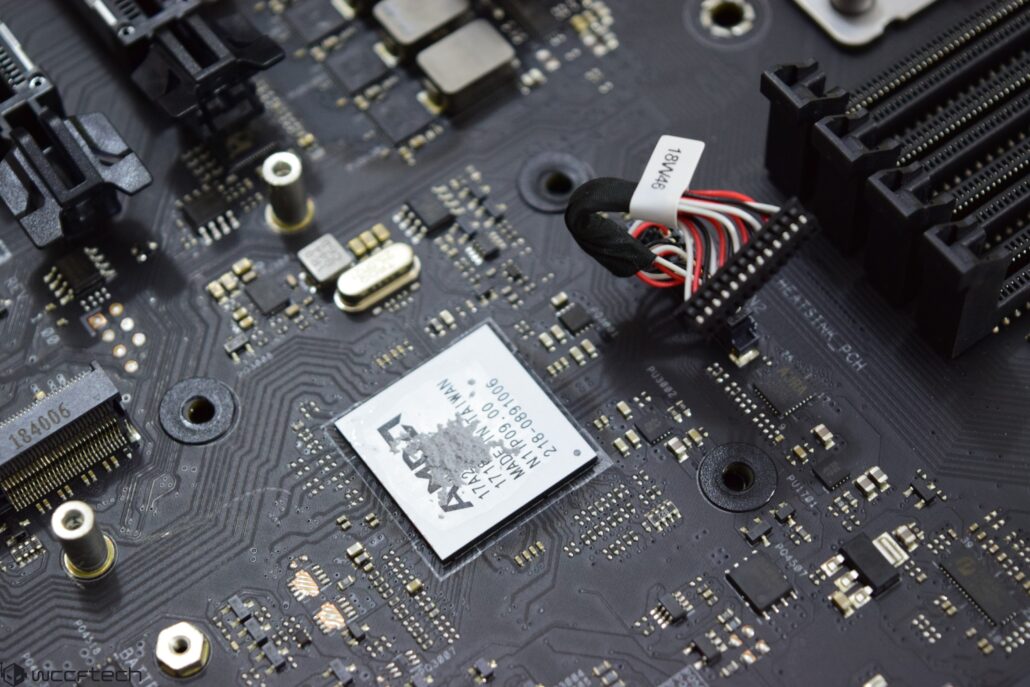 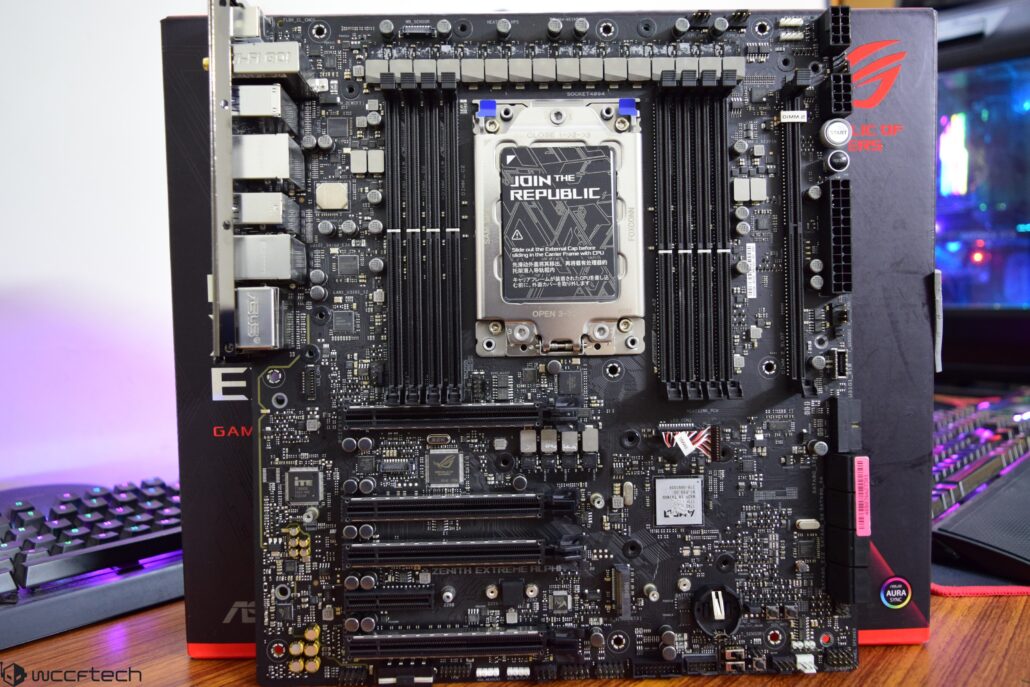 ASUS is running the SupremeFX 8-channel audio that uses the S1220 Codec. There are a lot of audio features on the motherboard which include: 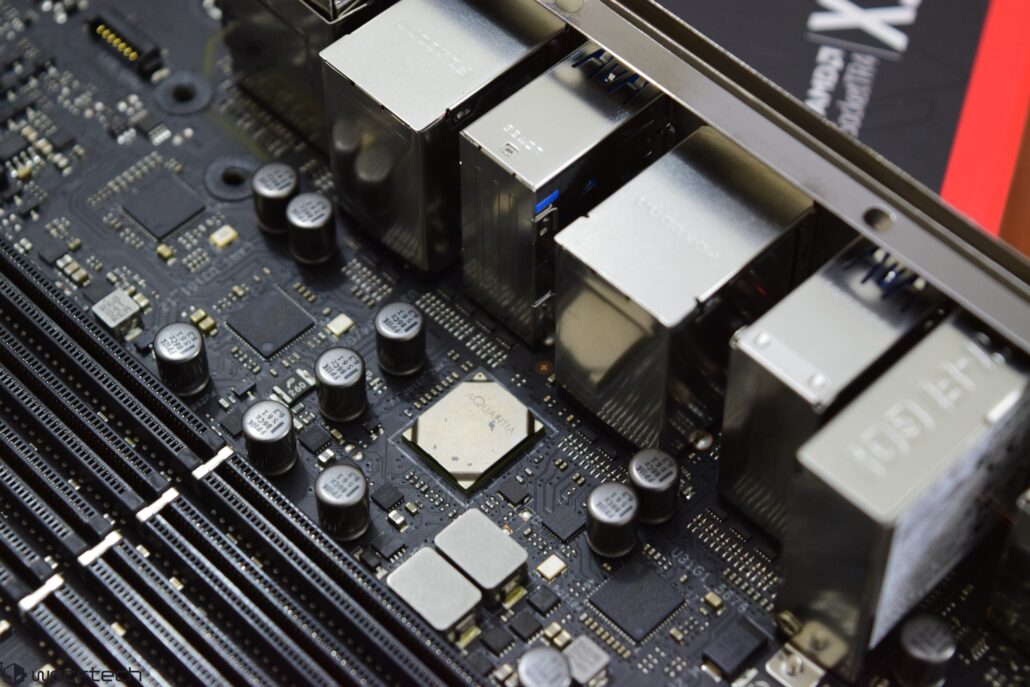 The ASUS ROG Zenith Extreme Alpha also rocks the Aquantia 10Gb LAN chip. The specific SKU of the chip is the NBase-T AQC107 which offers 10 Gigabit speeds. In addition to that, there's also an Intel i211AT Gigabit LAN port and Intel Wireless A9260 for wireless connectivity and Bluetooth 5.0 functionality. 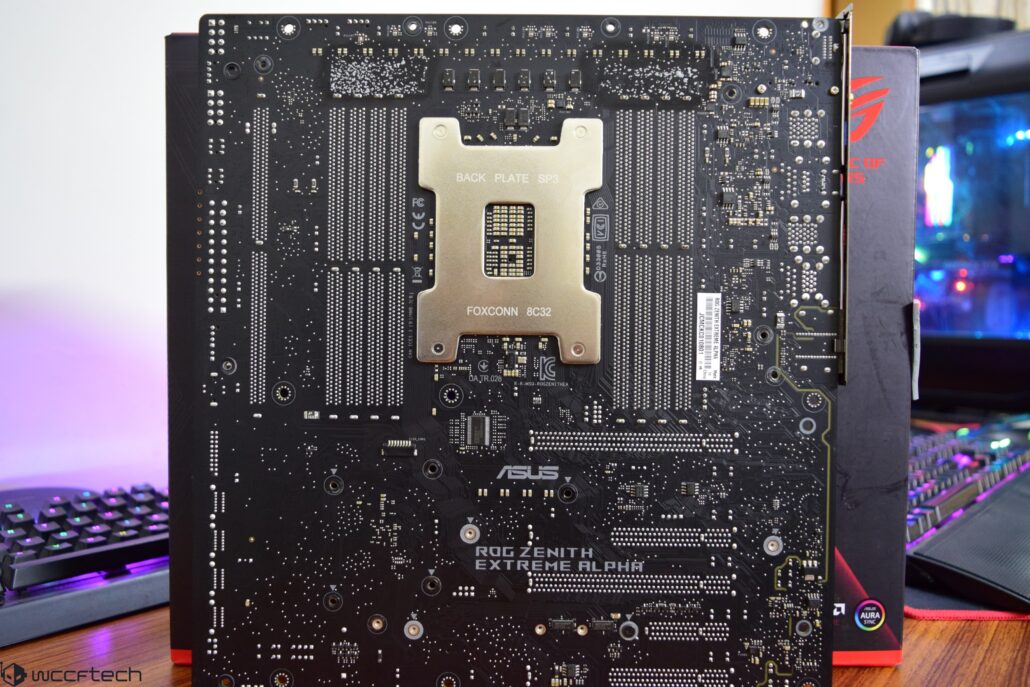 The I/O cover looks great with embedded RGB and hiding the active fan cooling underneath it. The ROG logo and the fine lines look nicely designed. What's more interesting is the pre-mounted I/O shield which saves a lot of hassle when building PCs. It has been my point since last year that this should be a standard on all motherboards or at least the higher end ones. 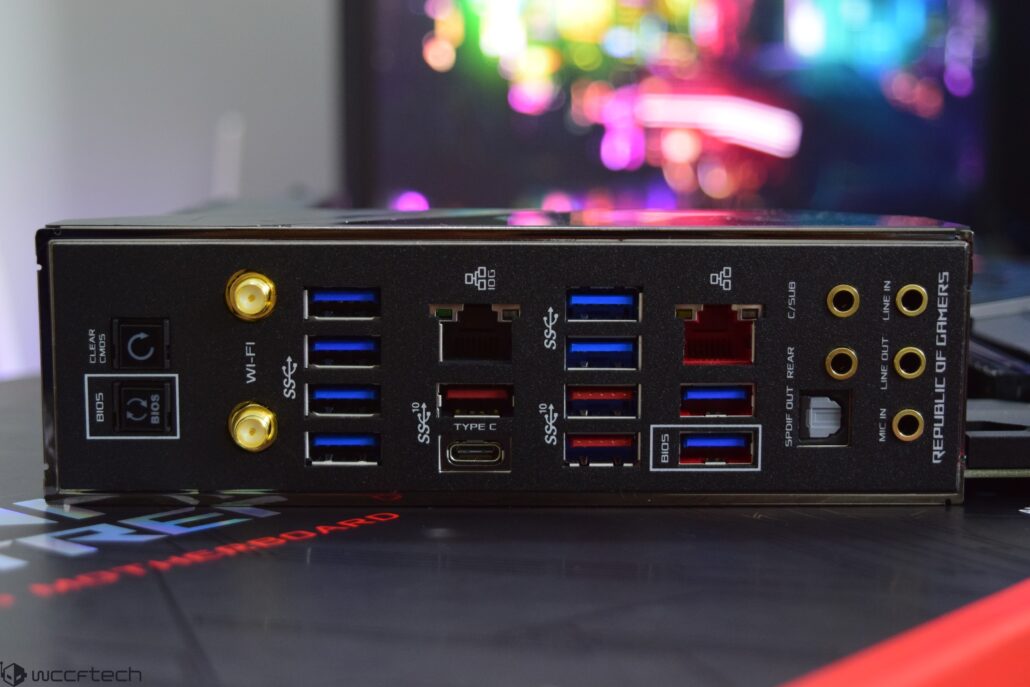 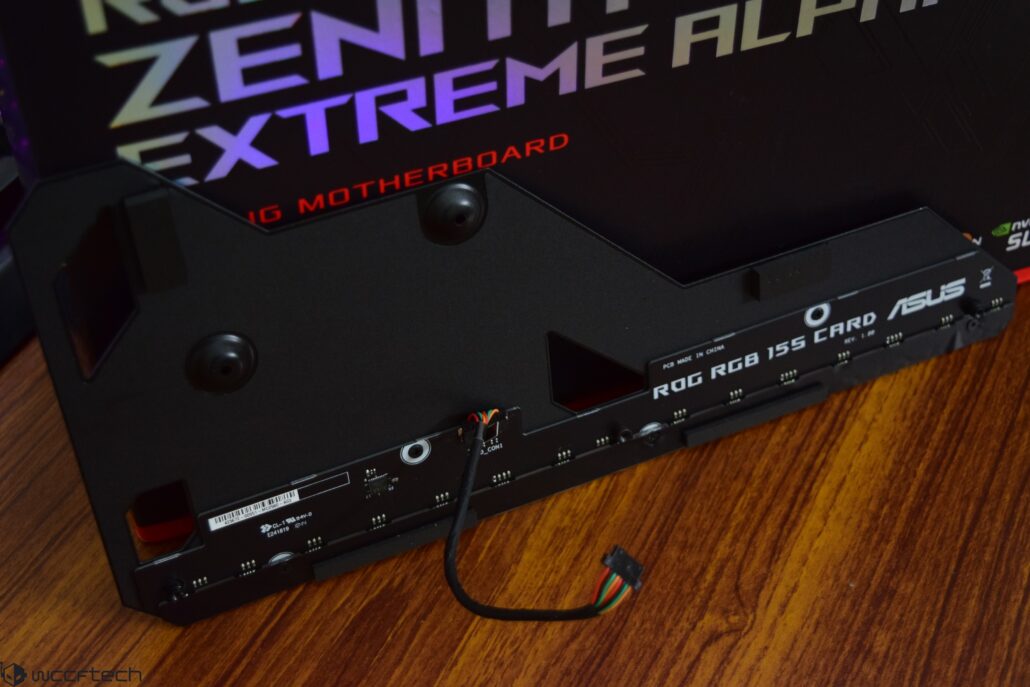 Also, the back side of the motherboard houses an array of RGB LEDs on their own RGB board which is easily accessible by removing a few screws.