As a refresh to their HEDT product lineup, the ASUS ROG Zenith Extreme Alpha became ASUS's flagship X399 series motherboard. The motherboard has a lot in common with ASUS's ROG Zenith Extreme, the most high-end X399 motherboard for the Ryzen Threadripper lineup at the time of launch but the Alpha takes the design methodology of the original a notch ahead. Following is what ASUS has to say about the Alpha:

Built to take command , ROG Zenith Extreme Alpha releases the full might of the 32-core AMD Threadripper processor, while keeping thermals under control with intelligent cooling and an SOC heatsink designed especially for the CPU's monstrous power. For high-end gamers and overclockers who equip themselves with ROG Zenith Extreme Alpha , there will be no doubts about who is leader of the pack.

The ASUS ROG Zenith Extreme Alpha is a premium product featuring a price of $699.99 US. It is one of the few X399 refresh series motherboards that consumers can buy for their new Ryzen Threadripper (2nd Gen / 1st Gen) processors but I would consider the higher end 'WX' series to be an ideal companion of this motherboard.

The ROG Zenith Extreme Alpha is very similar in design to the original Zenith Extreme but is still an updated version in a lot of ways. The TR4 socket is still in the middle, supporting all AMD Ryzen Threadripper processors. There are eight DIMM slots surrounding it that can support up to 128 GB of memory with speeds of up to 3600 MHz+. 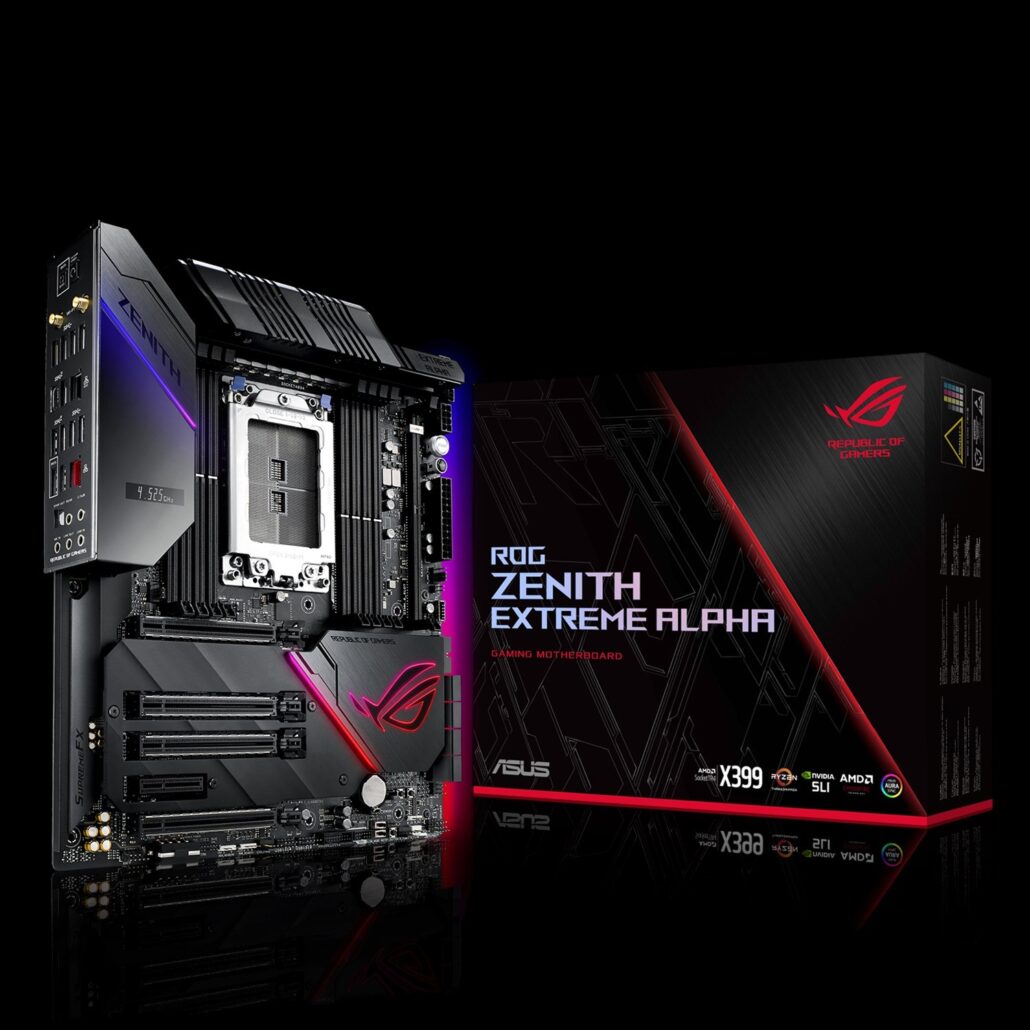 The motherboard is powered by dual 8 pin connectors and a single 24 pin ATX connector. ASUS has deployed an 8 Phase VRM with 16 power stages. The components include premium chokes, Capps, MOSFETs, and the IR3555 PowIRStage ICs delivering the best stability and overclocking potential for this tier of a motherboard.

The cooling design gets an upgrade through the use of a much larger VRM heatsink with an extended coverage area and a direct touch heat pipe that delivers increased heat dissipation. The board makes use of active fan cooling with two of them hidden behind a heatsink shroud over the VRMs. The rest of the motherboard is similar to the previous Zenith Extreme featuring four PCI-e 3.0 x16 (x16/x8/x16/x8), a single PCI-e 3.0 x4, and dual M.2 slots. All M.2 slots are shrouded by the metal heatsink while a DIMM.2 slot offers even more expandability options.

The PCH heatsink shroud has RGB LEDs and made from anodized aluminum which looks amazing. The I/O cover has the ROG Live Dash screen which displays different readings from the CPU such as clock speed, temps and the current voltage.