The X570 AORUS Pro WiFi is styled in silver and black. The motherboard comes with the standard ATX form factor so compatibility won't be an issue on a wide range of PCs. The theme is very nice and modern looking and doesn't overdo with fancy designs or flashy RGBs. 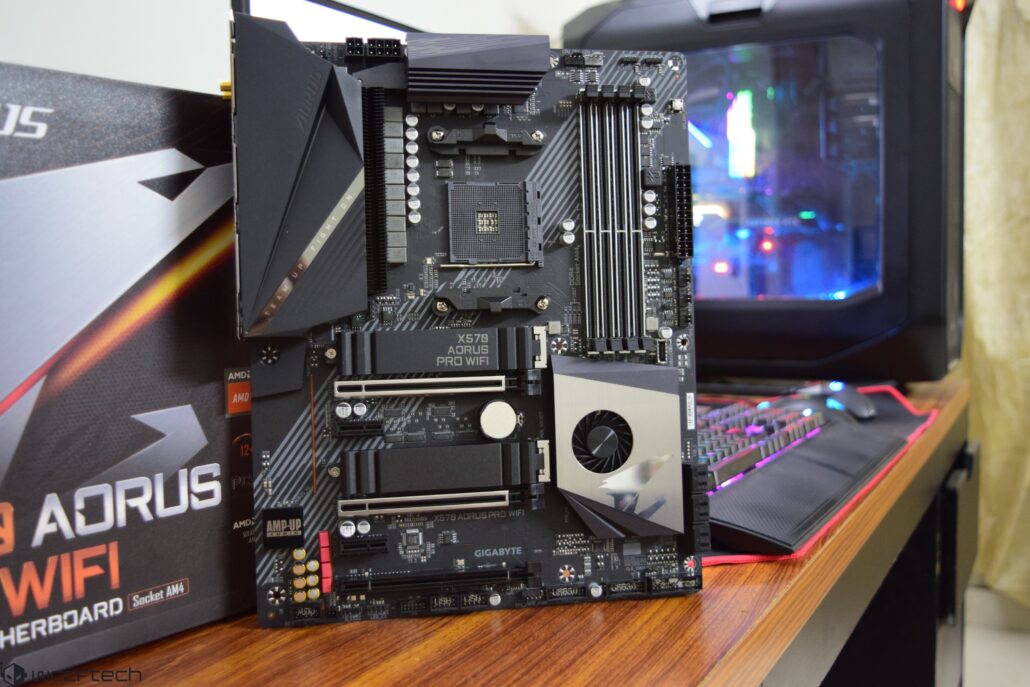 The board packs a better overall design scheme that allows for faster connectivity, memory support and storage options compared to X470 motherboards. Once again, the most notable change is the color scheme where the previous X470 AORUS Gaming WiFI series used an orange tone over the heatsinks and an overdose of RGBs. This time, the board features a more simplistic look that offers more functionality but still looks better aesthetics wise compared to the previous generation. 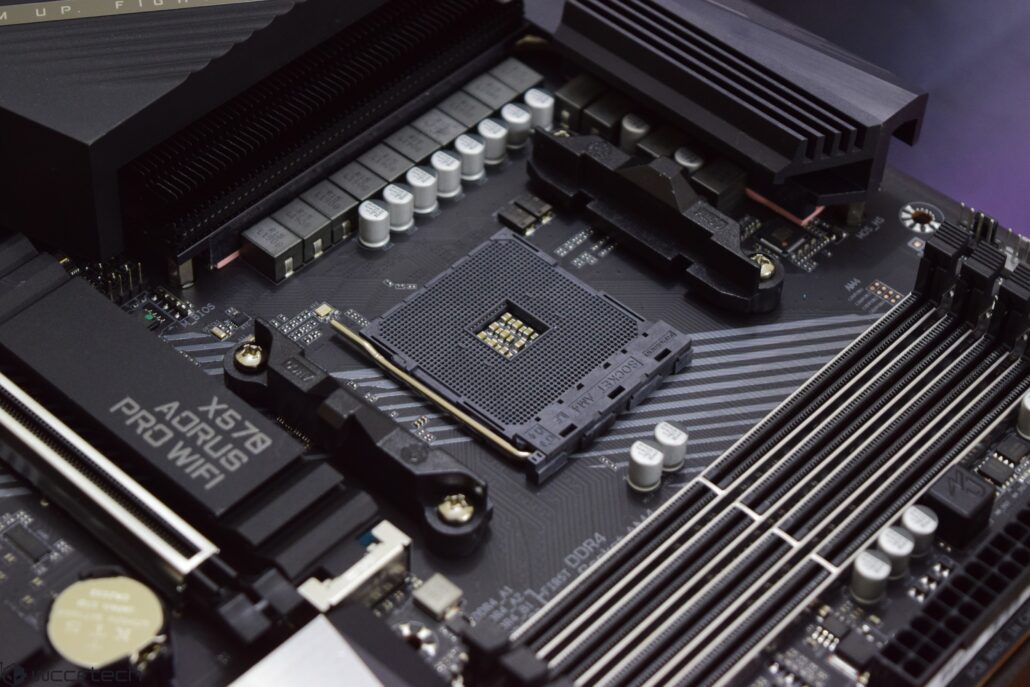 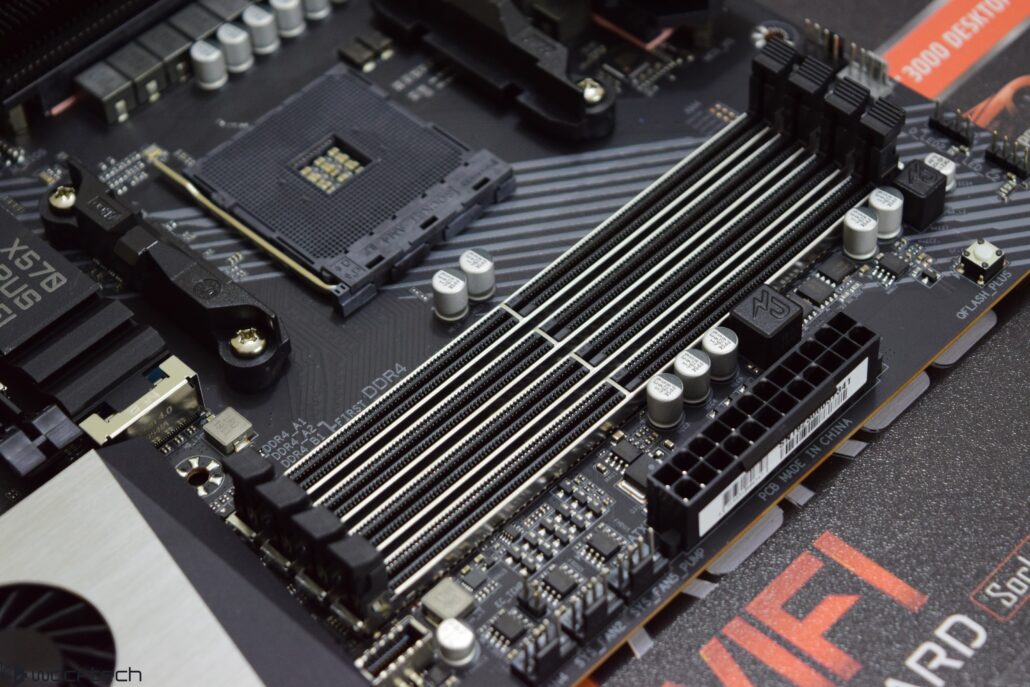 Right next to the socket are four DDR4 DIMM slots which can support up to 128 GB (dual channel) memory. These slots are rated to support DDR4 DIMMs with frequencies all the way up to 4400 MHz (OC+) which is a huge increase from the X470 AORUS Gaming 7 WiFi which only supported up to 3600 MHz (OC+) DIMMs. All four DIMMs are soldered with Durable memory armor which can be useful to prevent PCB bending of the motherboard and any sort of ESD interference that could lead to instability of the system. 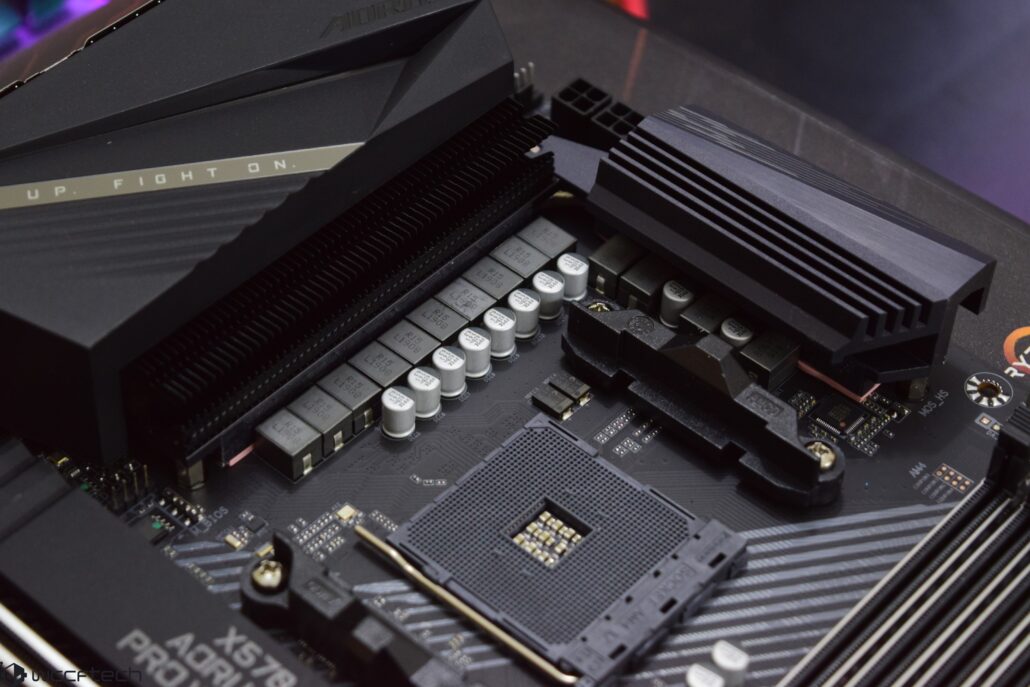 The motherboard packs a 12+2 Phases IR Digital VRM Solution with 40A IR 3553 PowIRstage for Vcore which powers the socket. The phases combined, deliver up to 480 Amps of current to the socket. Along with the power design, the board uses a 2x copper PCB and uses Ultra Durable components which emphasize quality over quantity, offering higher stability. The motherboard comes with Diagnostic LEDs instead of a postcode display which is a slight let down since you are paying $250 US+ for the motherboard. Other than that, it does come with a DualBIOS design that is a plus. 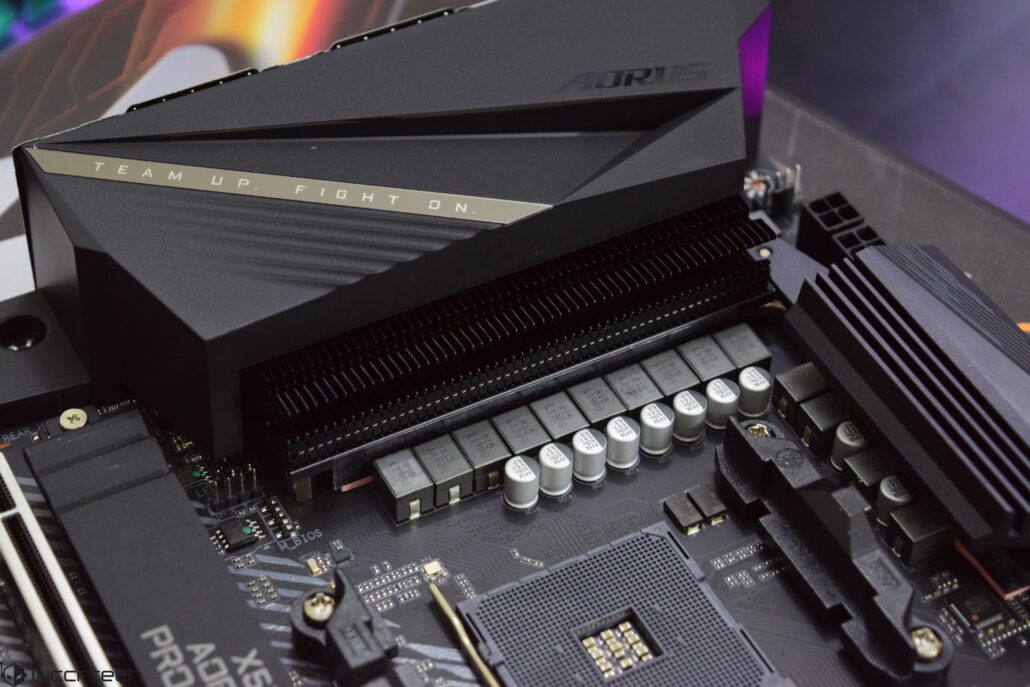 The VRMs are covered by two sets of heatsinks which are made of aluminum and part of the Advanced Thermal heatsink design. Both sets are colored in metallic silver and have cuts within them to add to the aesthetics. 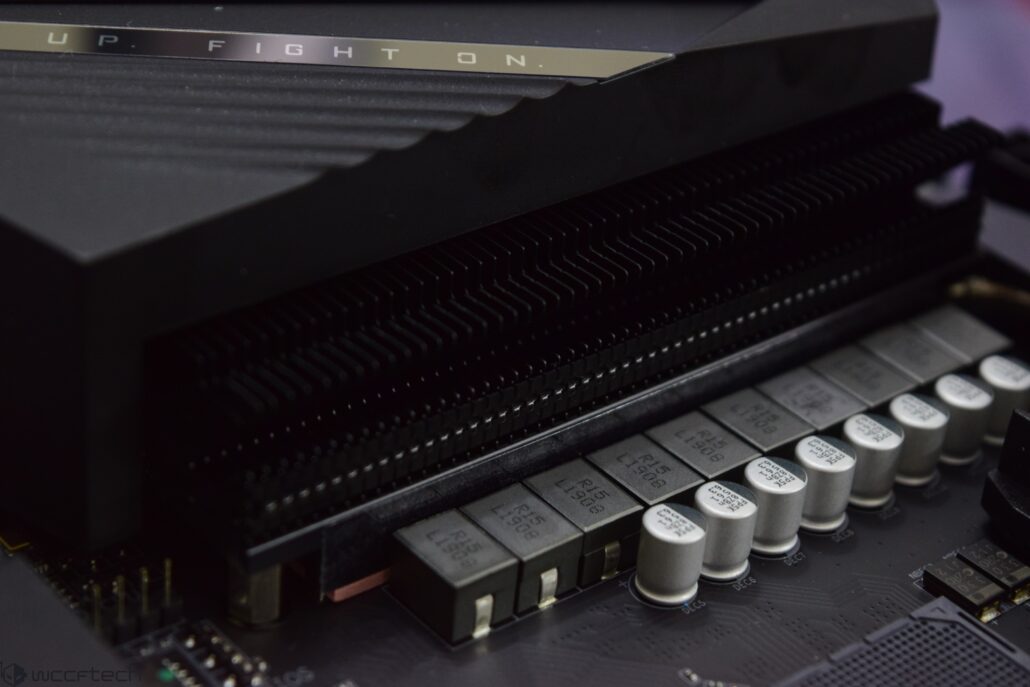 While one of the heatsinks is a chunk of aluminum with cuts to disperse air more efficiently, the other block is a full-on fin-array which offers 300% more dissipation area than regular heatsinks. The fin array heatsink offers 30% better cooling and can transfer up to 2.7 times more heat. The fin-array also makes use of 5W/mK thermal conductivity pads to ensure that the VRMs are pushing heat off of them effectively. To top it off, AORUS also makes use of a direct touch heat pipe that goes through both VRM heat sinks and offers good contact between them. 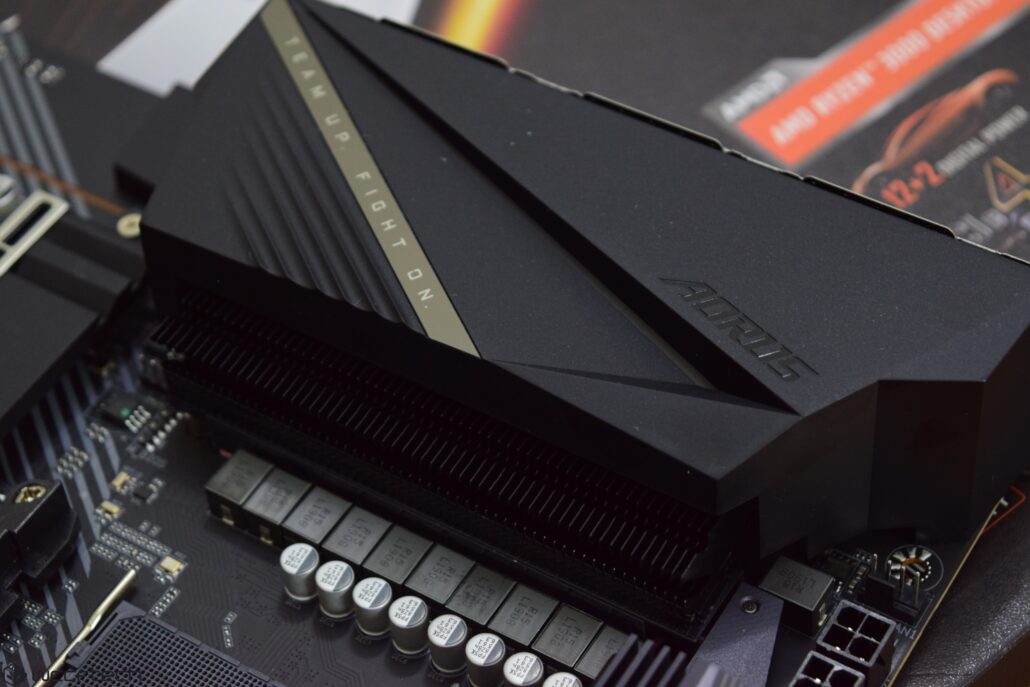 The top I/O cover has an AORUS logo which is a nice touch to the AMD setup. The shield covers the entire I/O panel and looks great on this motherboard.

The X570 AORUS Pro WiFi motherboard cover on the I/O panel looks decent. There’s no cooling mechanism involved with the cover as it’s just for visuals and mostly hollow from the inside, but it does add to the overall looks of the product and that’s its main purpose here. The WiFi 6 module is hidden beneath the I/O cover so it's a good way of hiding the visually unpleasing mechanism of the board. 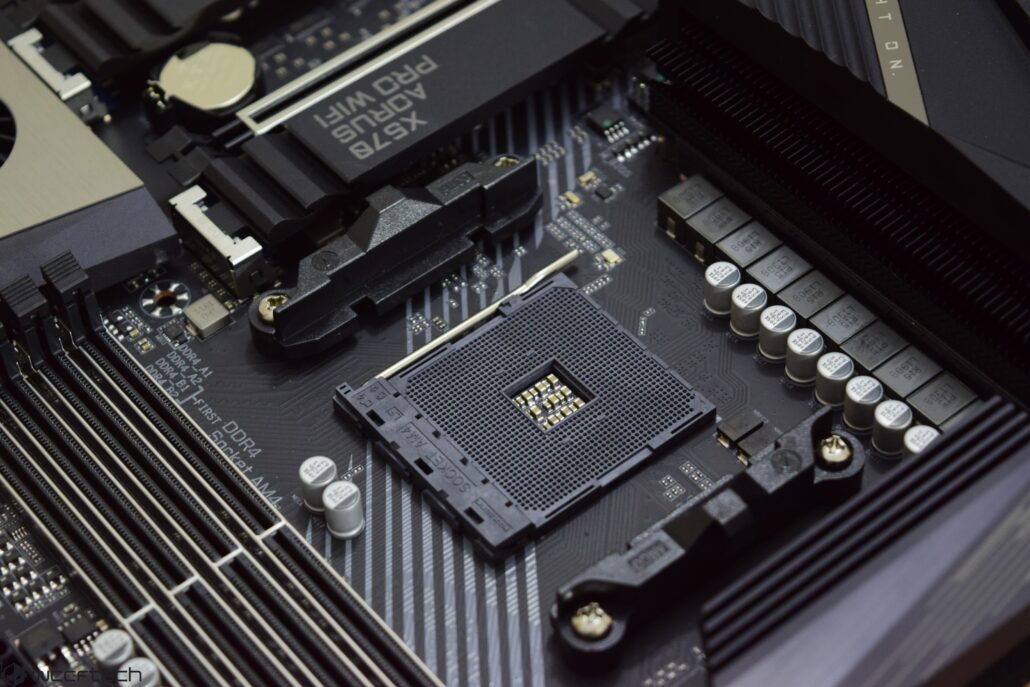 The CPU is supplied with power through an 8 + 4 power connector. This will feed the CPU with up to 225W of power. Most AMD CPUs will be shipping with TDPs of up to 105W but that changes when users overclock since that changes the power limit based on applied voltages and clock speeds. 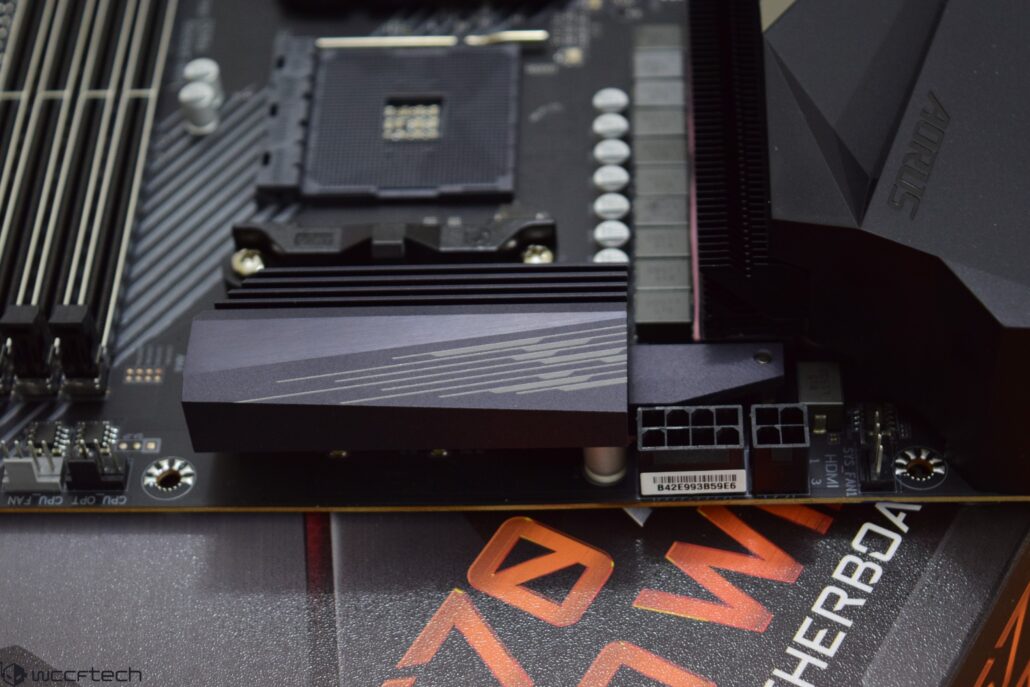 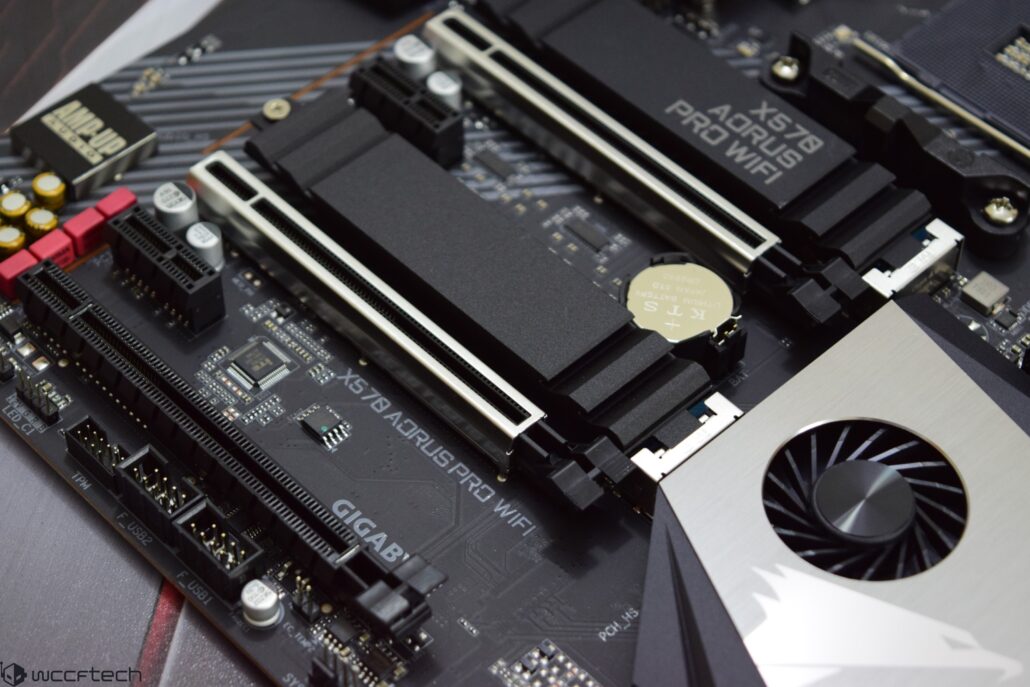 X570 AORUS Pro WiFi once again introduces Gigabyte's Ultra Durable PCIe armor which is also used on their previous generation motherboards. The armor can resist up to 1.7x shearing and 3.2x retention force, allowing for a more durable design than non-armored PCIe slots. 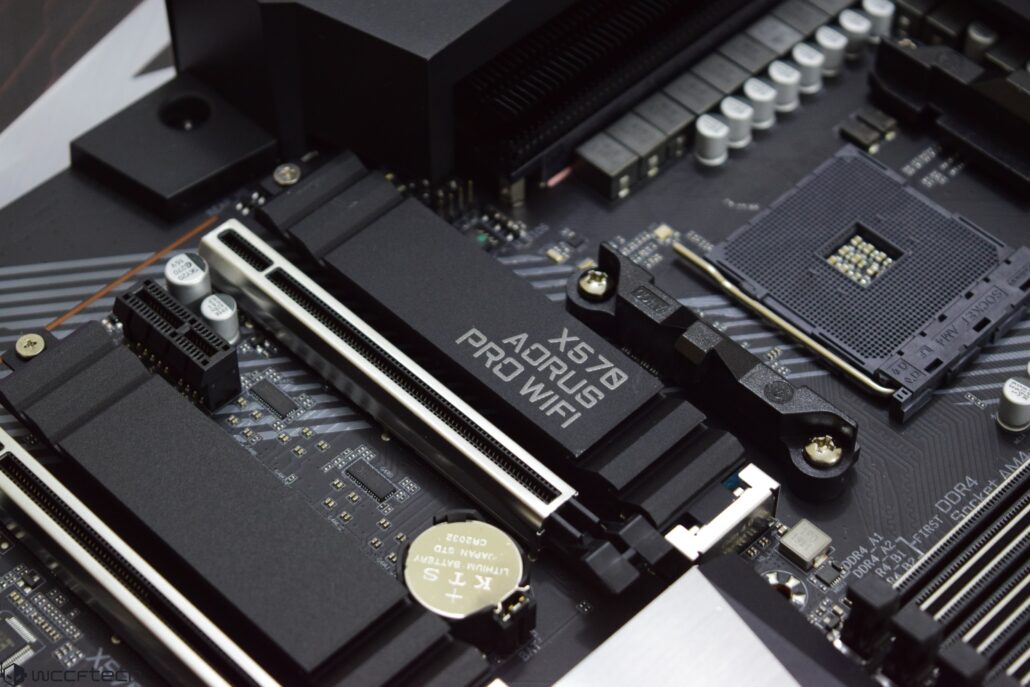 There are two Ultra M.2 slots on the motherboard that operate through PCI Express 4.0 x4 link at speeds of 64 GB/s. Both slots are ideally placed. One of them is located at the top of the first PCIe 4.0 x16 slot while the other is situated over the second PCI-e 4.0 x16 slot with ample room for up to 110mm M.2 drive/memory support. Both of these M.2 ports are hidden beneath the Thermal Guard which offers heatsink cooling for stable operation of the SSDs under heavy loads. 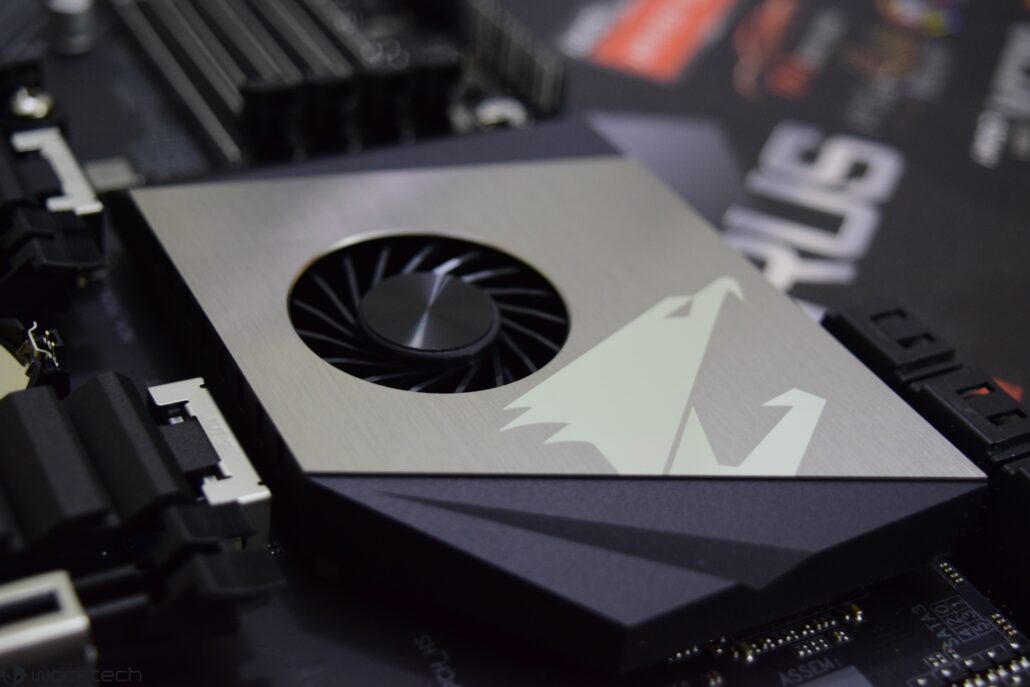 The X570 PCH is housed beneath a large heatsink with the AORUS logo etched on it for aesthetics. The PCH also utilizes RGB Fusion 2.0 which is fully user-customizable. It also comes with an active fan solution which runs all the time to keep the PCH cool. 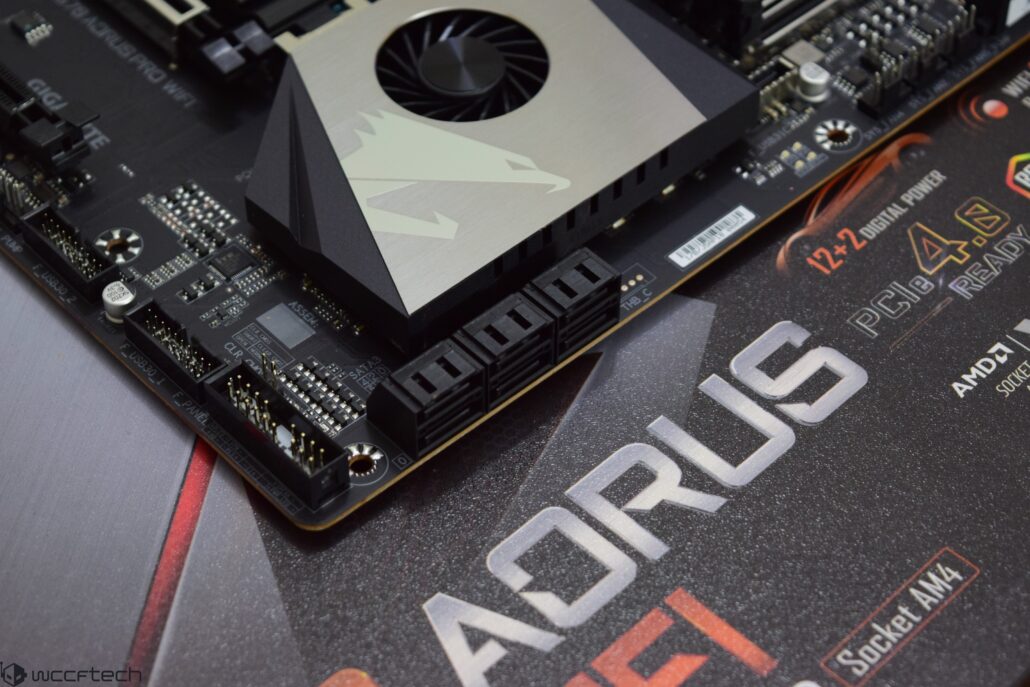 Storage options include six SATA III ports rated to operate at 6 Gb/s. These can support a total of 6 different storage devices at the same time. 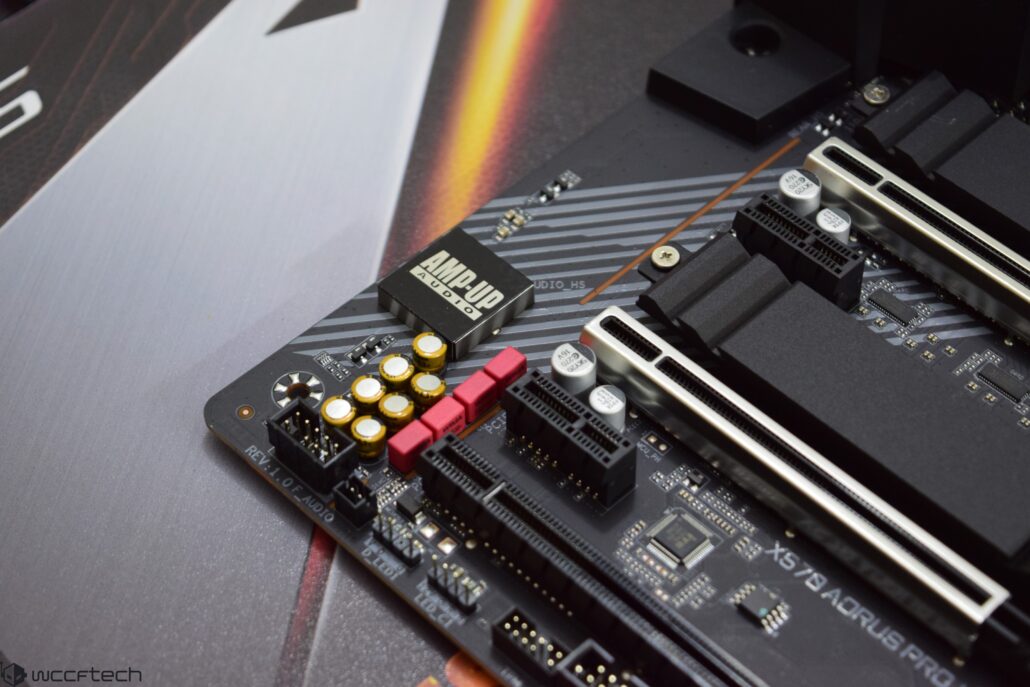 AORUS is using the ALC 1220-VB audio codec audio system on this motherboard that has its own audio PCB isolated from the rest of the board. The AORUS motherboards boast a combination of Hi-Fi grade WIMA FKP2 capacitors and high-end Chemicon audio capacitors. While the high-end audio capacitors are suited for high-grade audio equipment, using state of the art technology to provide rich sound in the bass and clearer high frequencies, the WIMA FKP2 capacitors are being used widely in premium grade Hi-Fi systems. 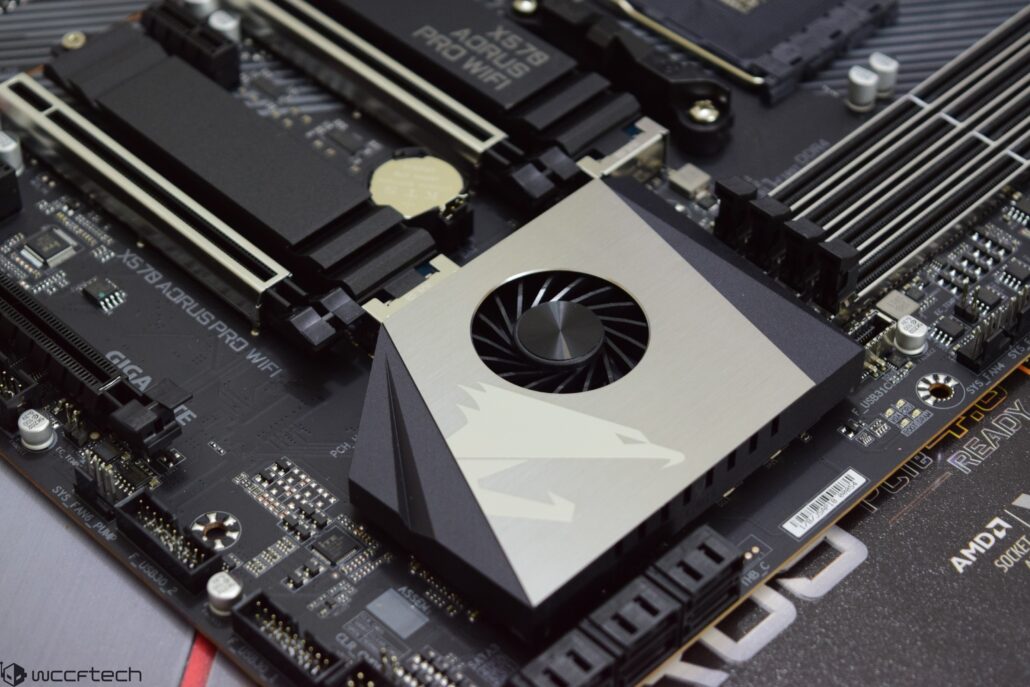 The motherboard has two onboard USB 3.0 headers which can be used to connect the front panel. There's also a single USB 3.1 Gen 2 front-panel header which can allow for up to two USB 3.1 Gen two ports. A list of connectors available internally on the motherboard include: 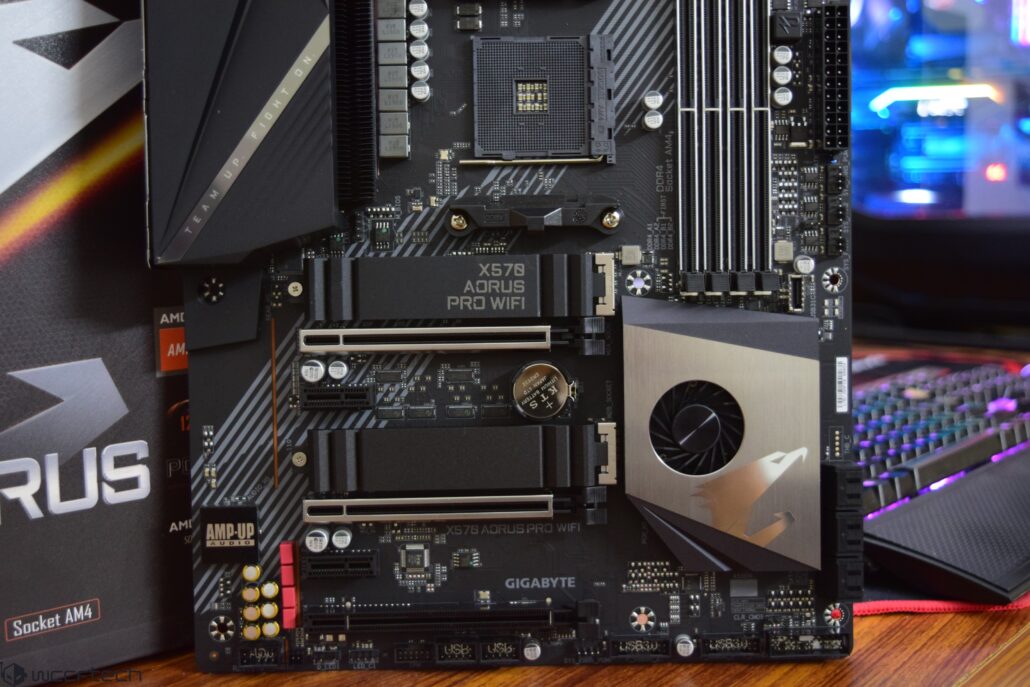 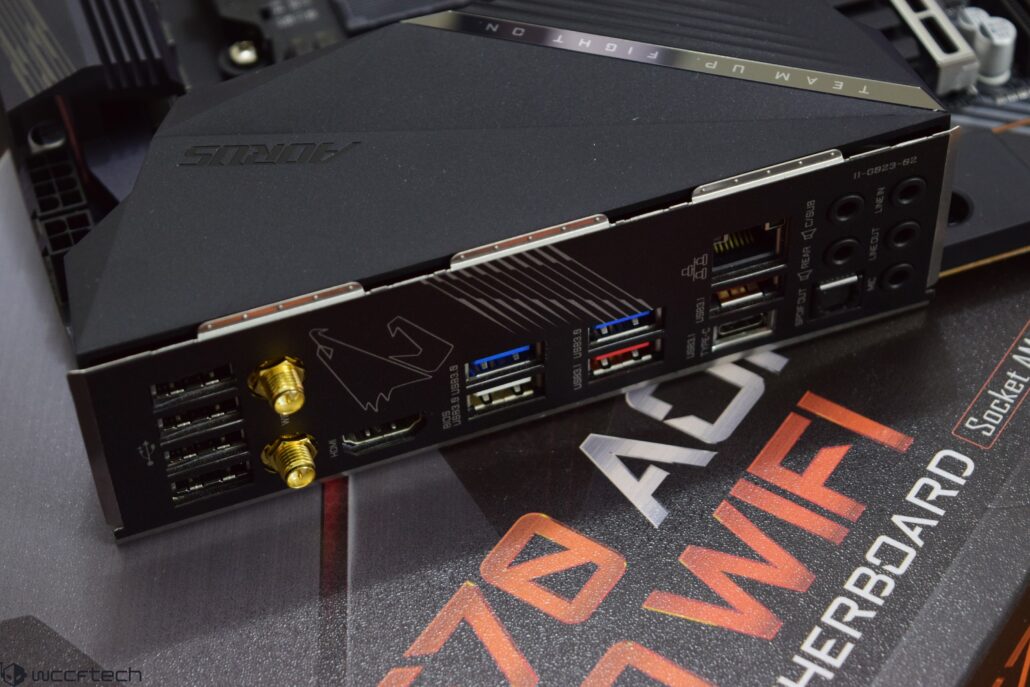