The ASRock X570 Taichi is styled in silver and black. The motherboard comes with the standard ATX form factor so compatibility won't be an issue on a wide range of PCs. The Taichi theme looks absolutely brilliant and eye-catching on the motherboard as well as the overall design layout which has been upped from the past Taichi variants. 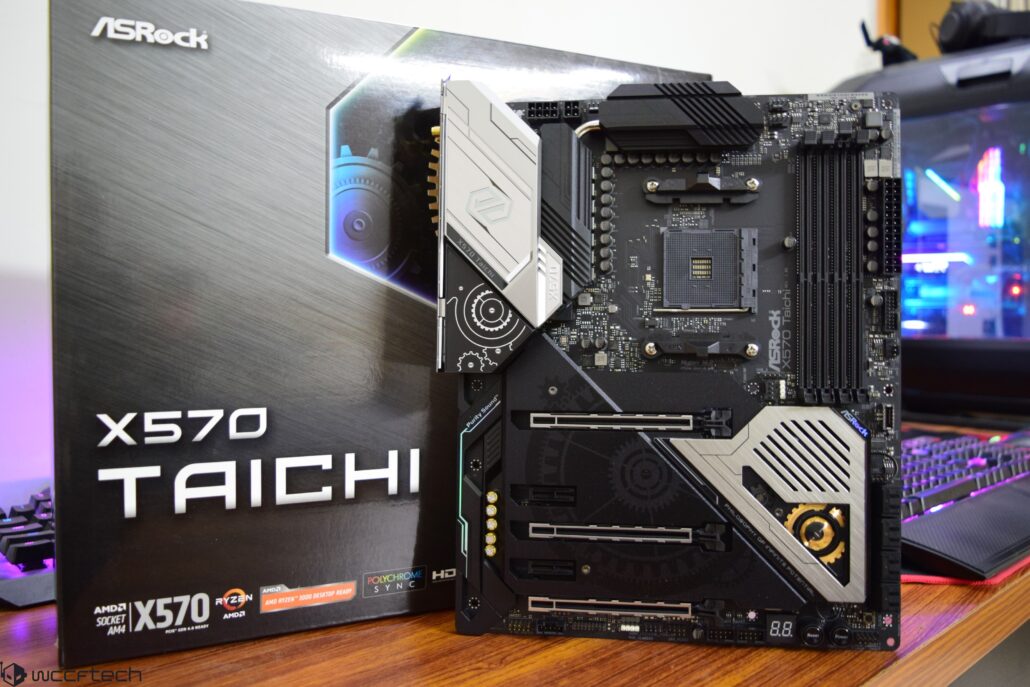 The board packs a better overall design scheme that allows for faster connectivity, memory support and storage options compared to X470 motherboards. The PCB is of matte black color with a Taichi specific gear design printed on the front cover that is termed as Heat Armor. The PCB itself is made of high-density glass fabric and uses 2oz Copper design. 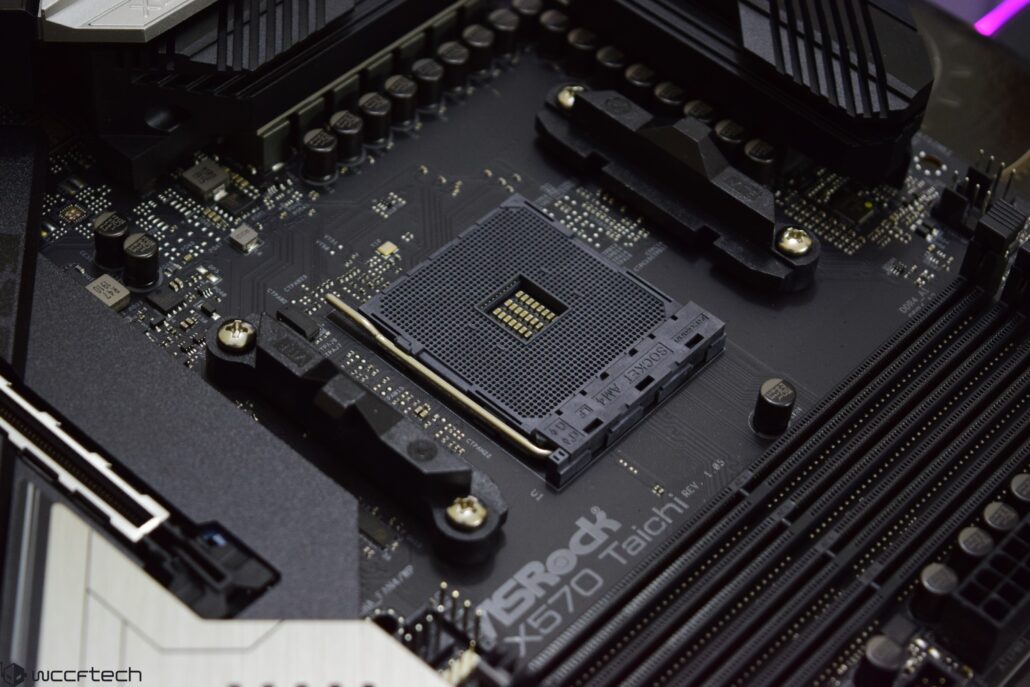 Right next to the socket are four DDR4 DIMM slots which can support up to 128 GB (dual channel) memory. These slots are rated to support DDR4 DIMMs with frequencies all the way up to 4666 MHz (OC+) which is a huge increase from the X470 Taichi Ultimate which only supported up to 3466 MHz (OC+) DIMMs. 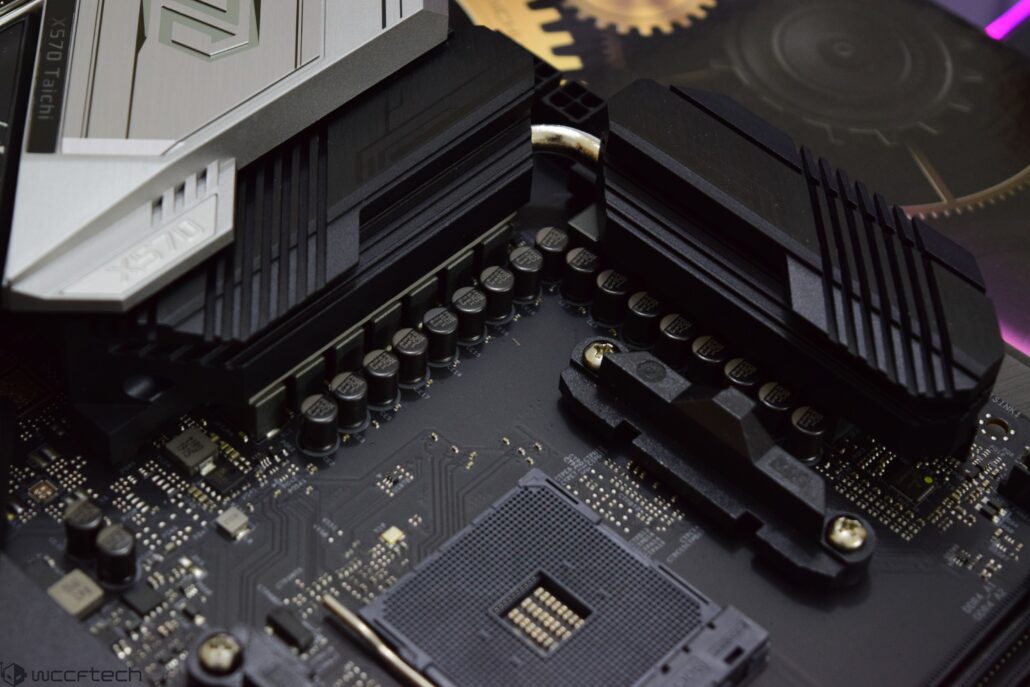 The motherboard packs a 14 phase Intersil Digital PWM which powers the socket. The PCB is outfitted with a long lifespan, durable black solid state capacitors that have an endurance rating of over 12,000 hours. Each phase is delivered 50A of continuous current through the Dr.Mos power stage solution.

The powerful VRM design allows overclockers to get the most from this motherboard. ASRock is listing this motherboard with the support of up to 300W EX OC and full water cooling support on Ryzen processors rated up to 105W. ASRock is also featuring 60A power chokes, Premium memory Alloy chokes, Dual-Stack MOSFET (DSM) and a solid PCB layout. 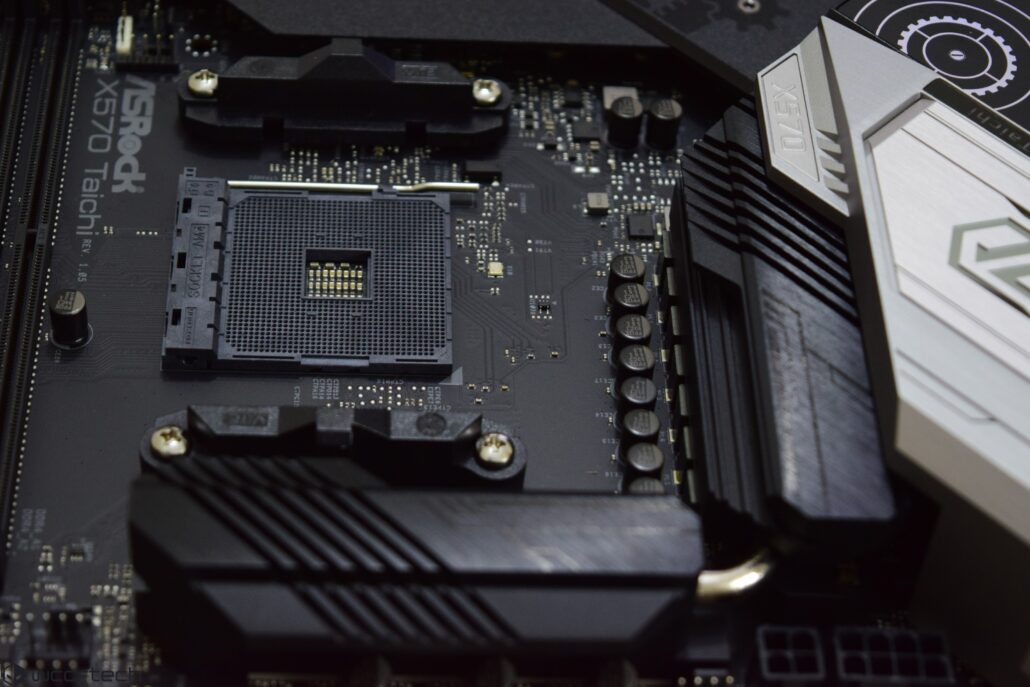 The VRMs are covered by two sets of heatsinks which are made of aluminum and part of the XXL Aluminum Alloy heatsink design. Both sets are colored in metallic silver and have cuts within them to add to the aesthetics. 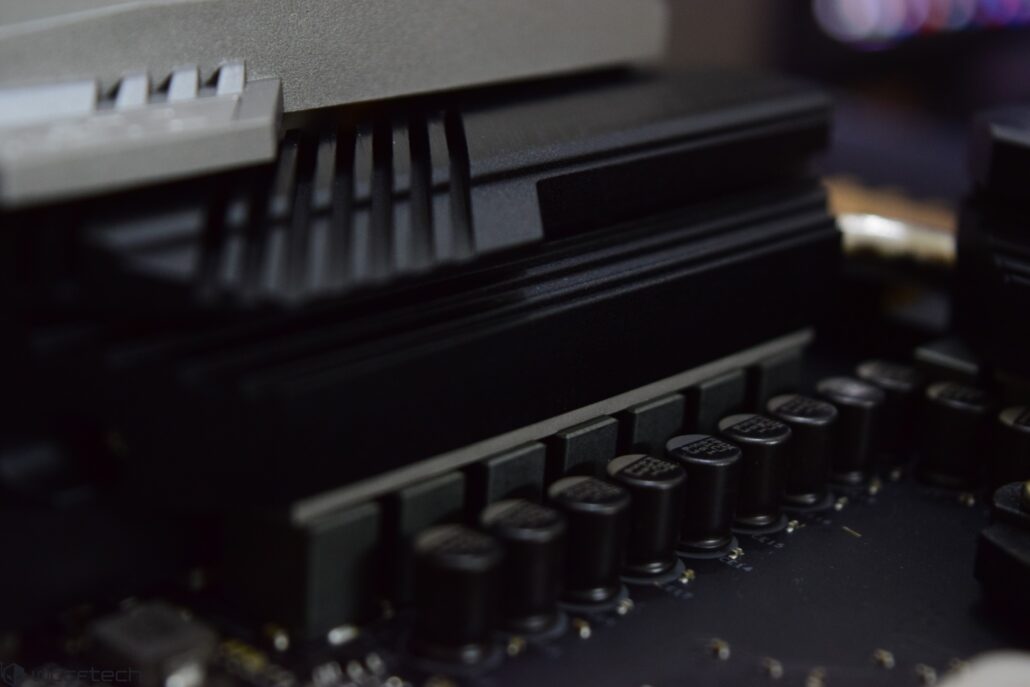 On closer inspection, you can note that the XXL Aluminum alloy heatsink design incorporates full copper heat pipes which is a must on this high-end motherboard for stable operation on the VRM front. 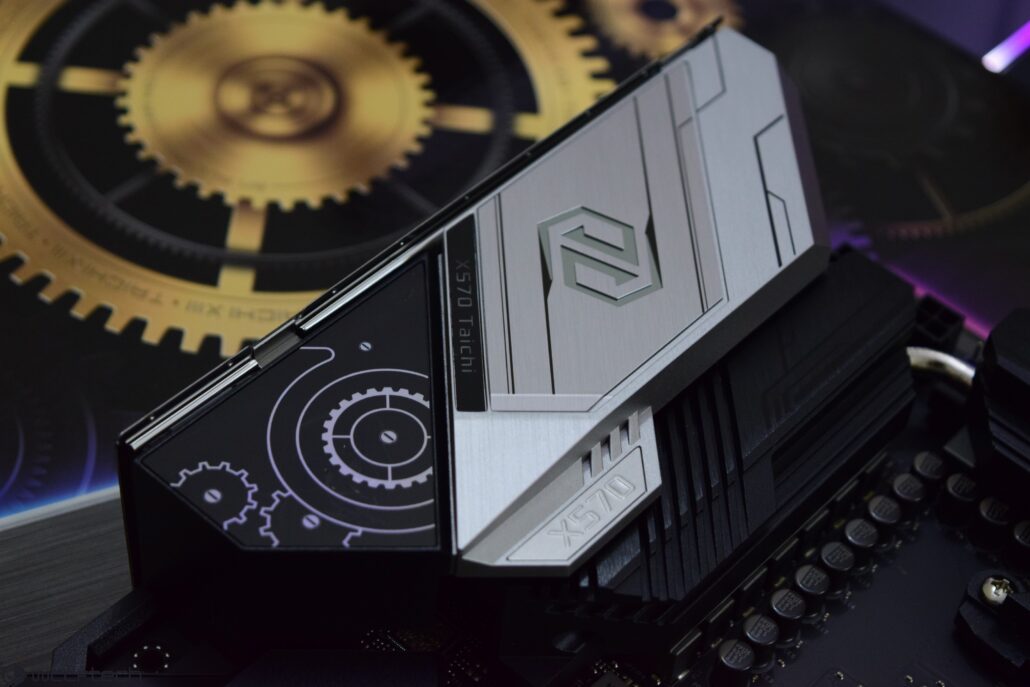 The top I/O cover has an ASRock logo which is a nice touch to the AMD setup. The shield covers the entire I/O panel and looks great on this motherboard. 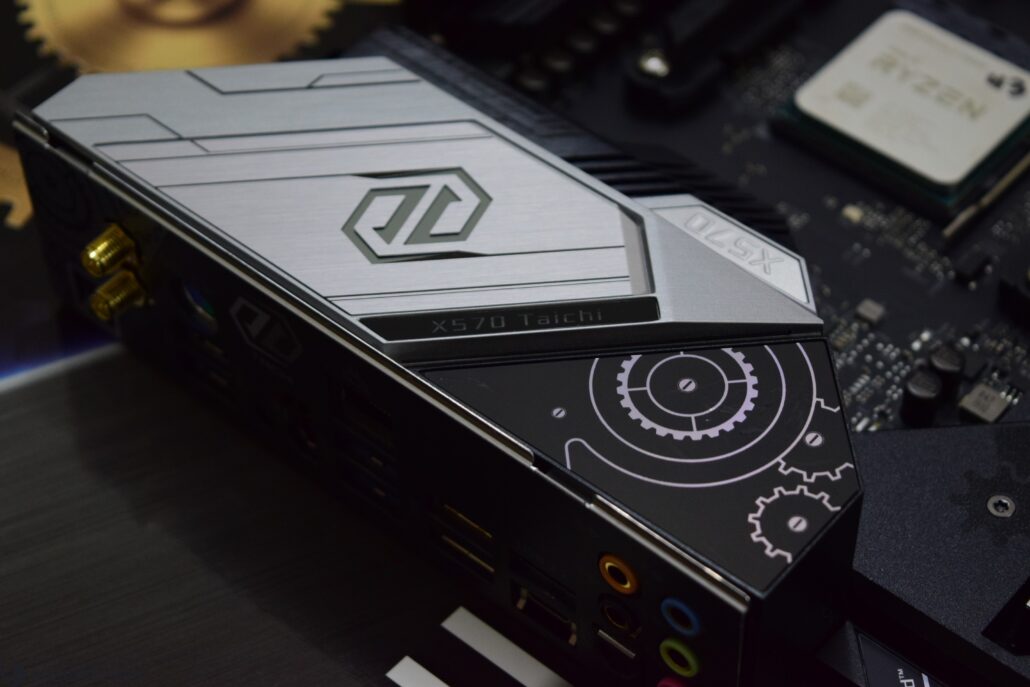 The ASRock X570 Taichi motherboard cover on the I/O panel looks decent. There’s no cooling mechanism involved with the cover as it’s just for visuals and mostly hollow from the inside, but it does add to the overall looks of the product and that’s its main purpose here. 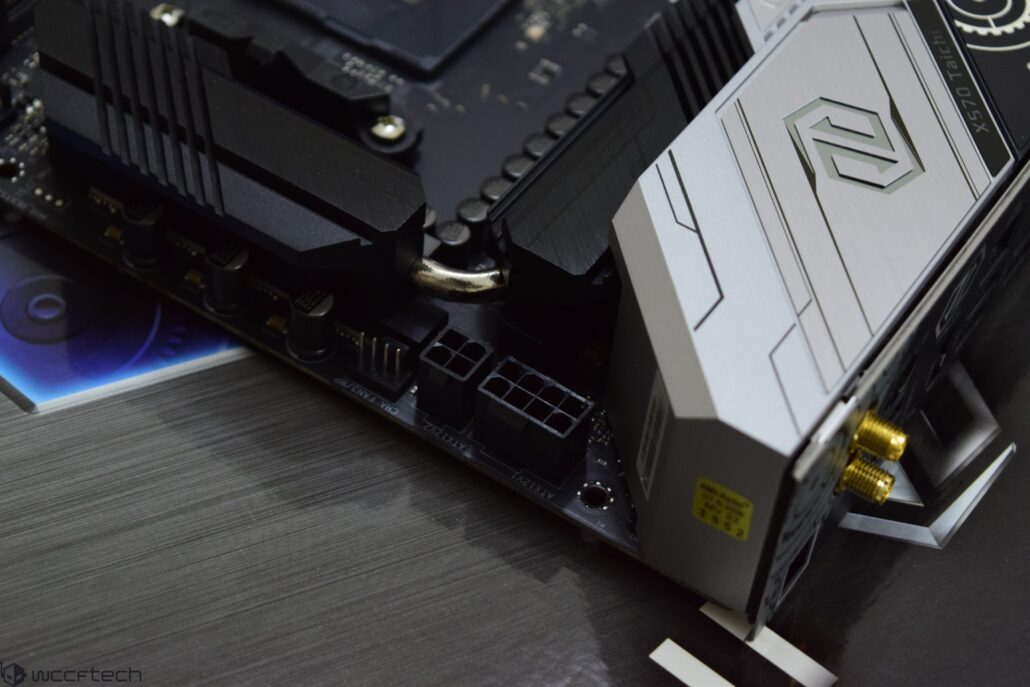 The CPU is supplied with power through an 8 + 4 power connector. This will feed the CPU with up to 225W (300W EX OC) of power. Most AMD CPUs will be shipping with TDPs of up to 105W but that changes when users overclock since that changes the power limit based on applied voltages and clock speeds. 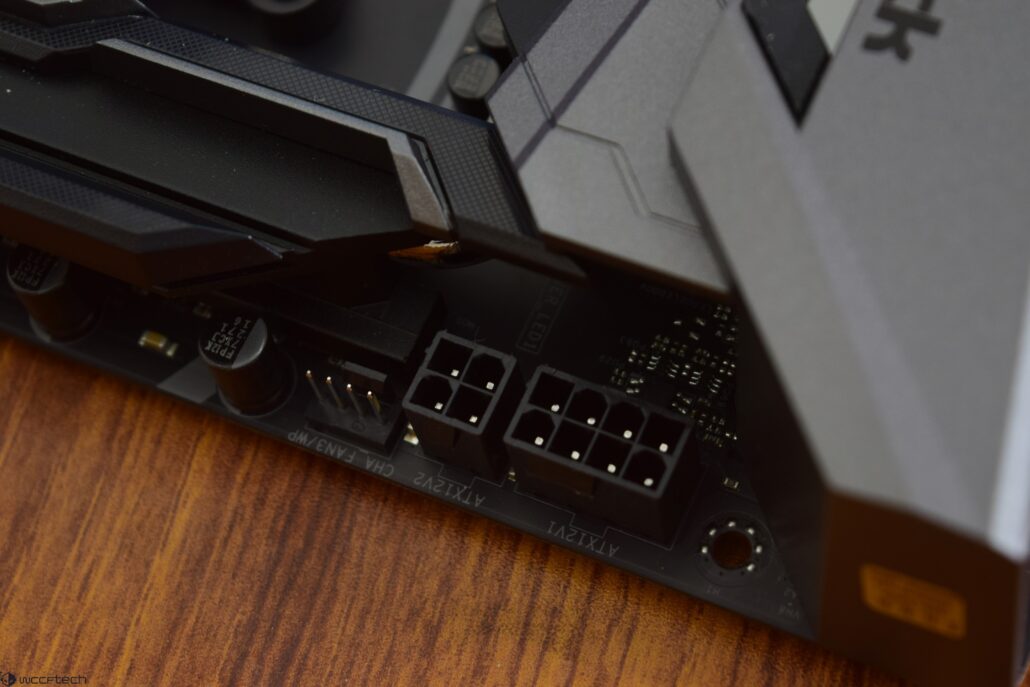 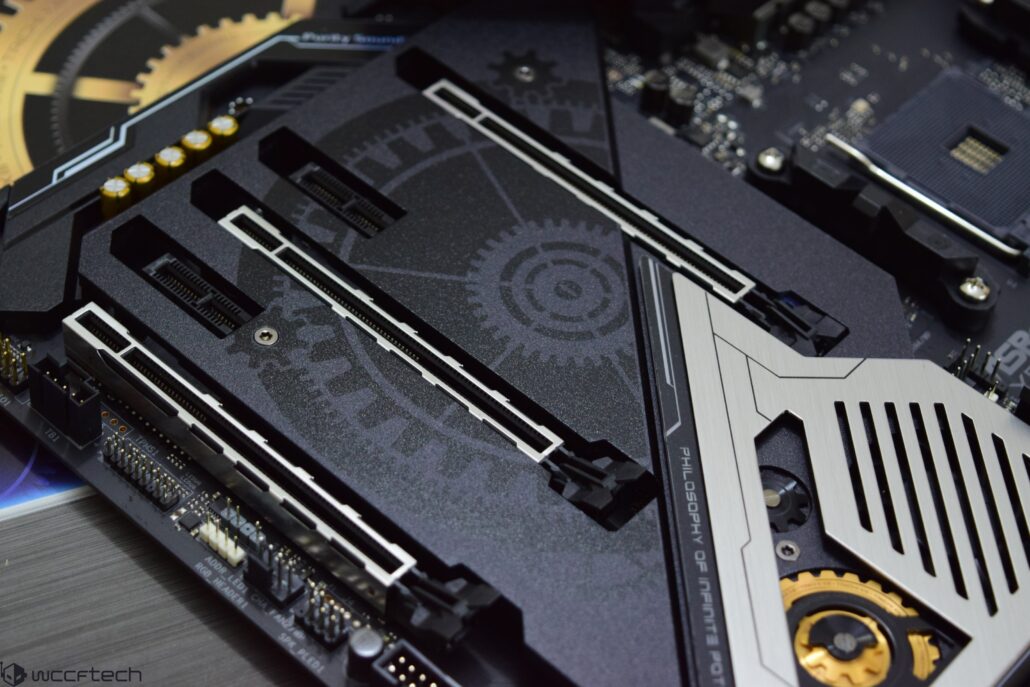 ASRock’s X570 Taichi adopts the latest PCIe steel slot design which are built with more solder points on the PCB for better performance and preventing any signal interference with graphics cards. This allows your graphics cards to be fed with better quality signals and to be safely and securely installed in the PCIe slots. 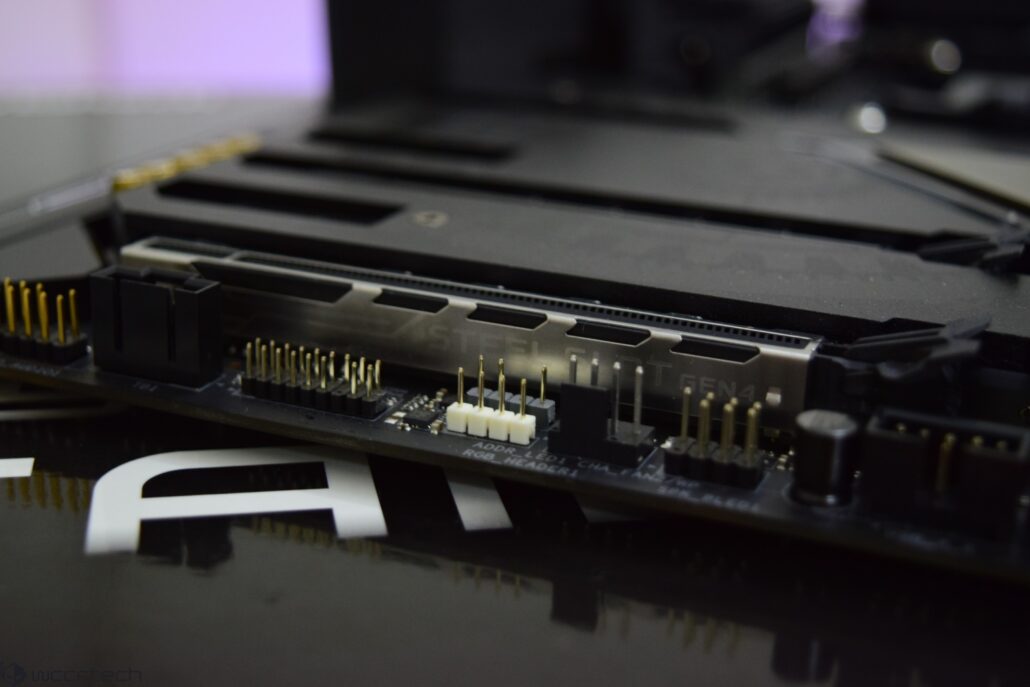 There are two Ultra M.2 slots on the motherboard that operate through PCI Express 4.0 x4 link at speeds of 64 GB/s. Both slots are ideally placed. One of them is located at the top of the first PCIe 3.0 x16 slot while the other is situated under the second PCI-e 3.0 x16 slot with ample room for up to 110mm M.2 drive/memory support. Both of these M.2 ports are hidden beneath the PCB cover which also provides cooling to the M.2 drives. 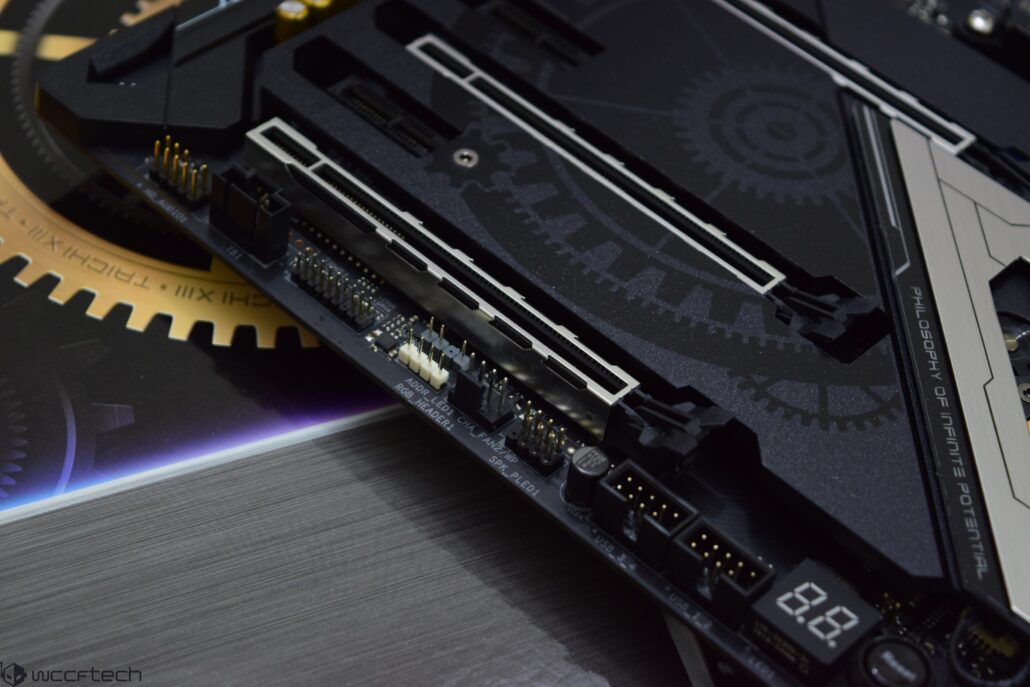 In addition to these two, there's a third M.2 Gen 4 x4 slot which is used as a vertical mount for the WiFi module. 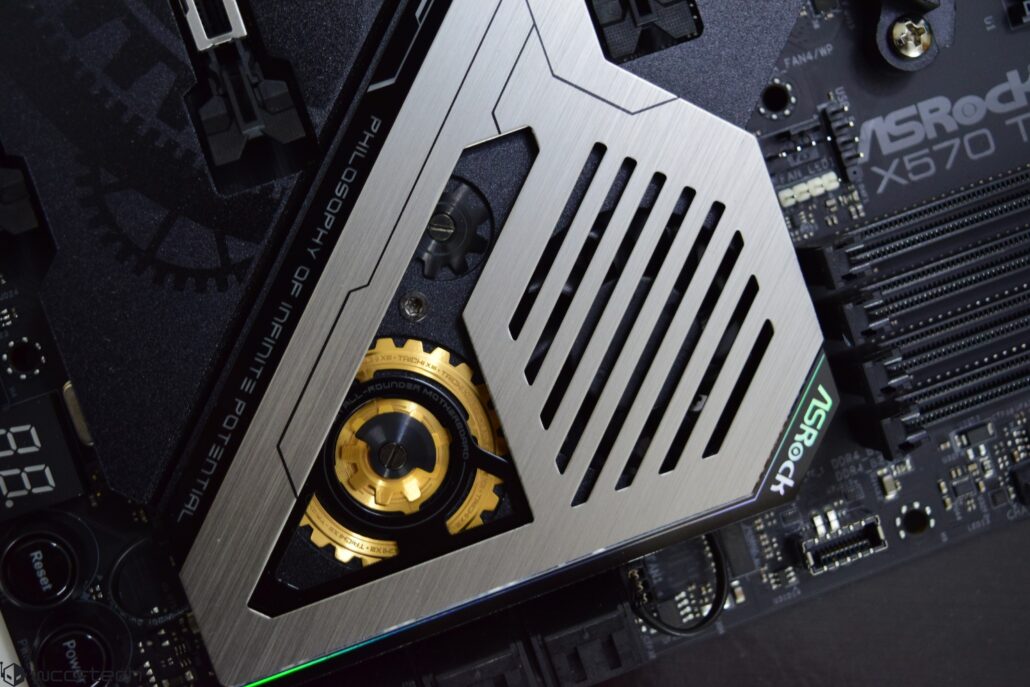 The X570 PCH is housed beneath a large heatsink with a set of metal gears embedded within it for aesthetics. The PCH comes also utilizes Polychrome Sync RGB which is fully user customizable. It also comes with an active fan solution which runs all the time to keep the PCH cool. 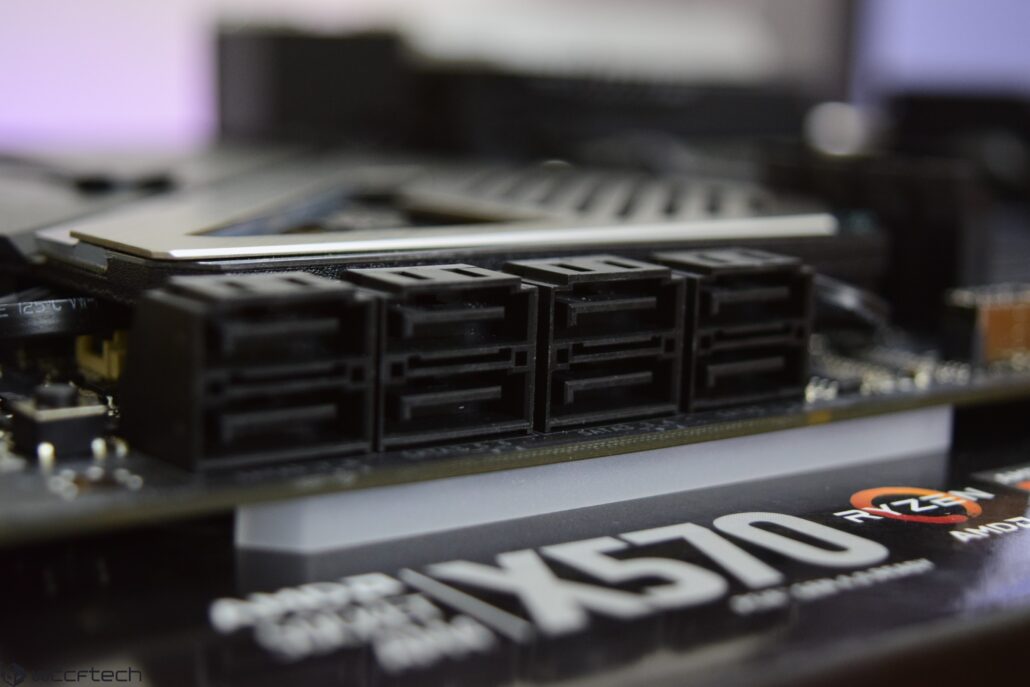 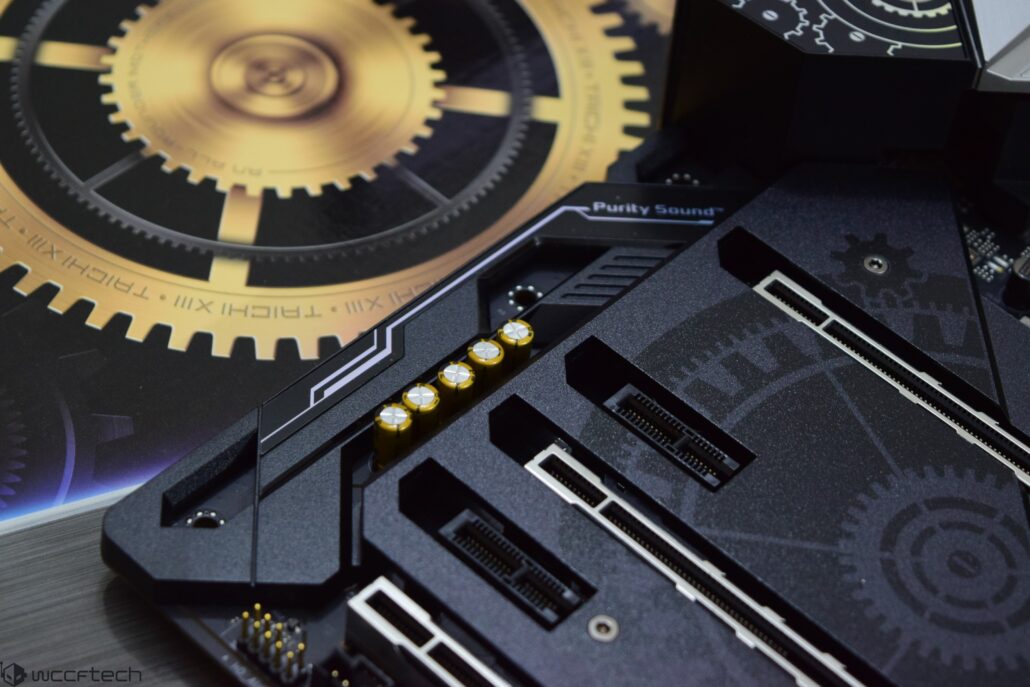 ASRock is using the ALC 1220 audio codec audio system on this motherboard that has its own audio PCB isolated from the rest of the board. This is part of the Purity Sound 4 system which includes a combination of hardware and software audio solutions such as the use of Nichicon Fine Gold Series Audio Caps, 120dB SNR DAC with Differential Amplifier, NE5532 Premium Headset Amplifier for Front Panel Audio Connector (Supports up to 600 Ohm headsets), Impedance Sensing on Line Out port, Gold Audio Jacks and 15μ Gold Audio Connector. 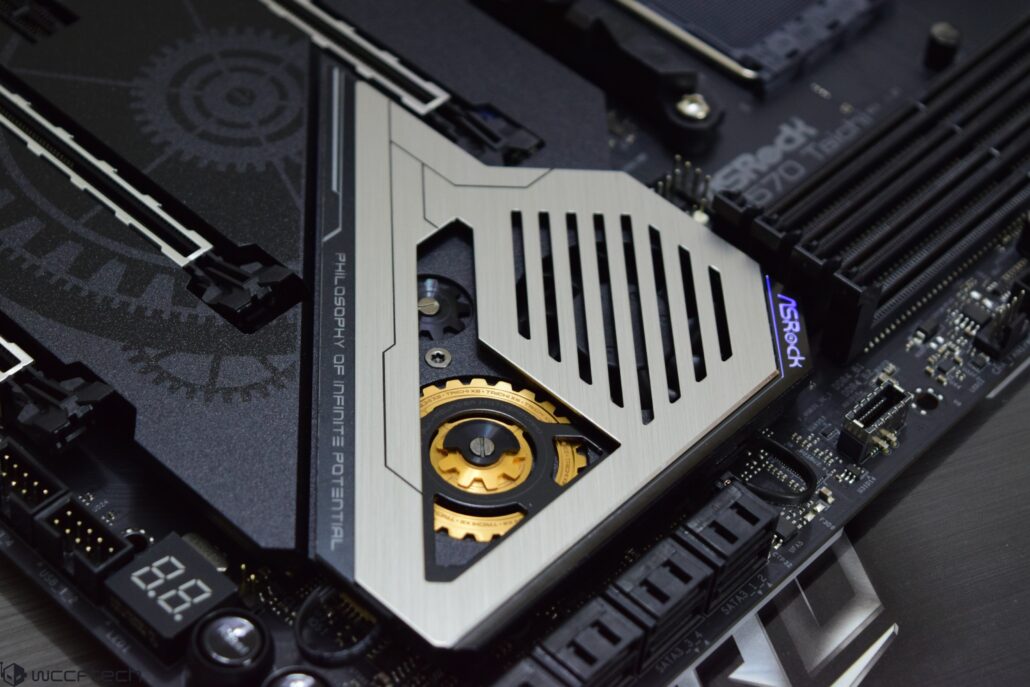 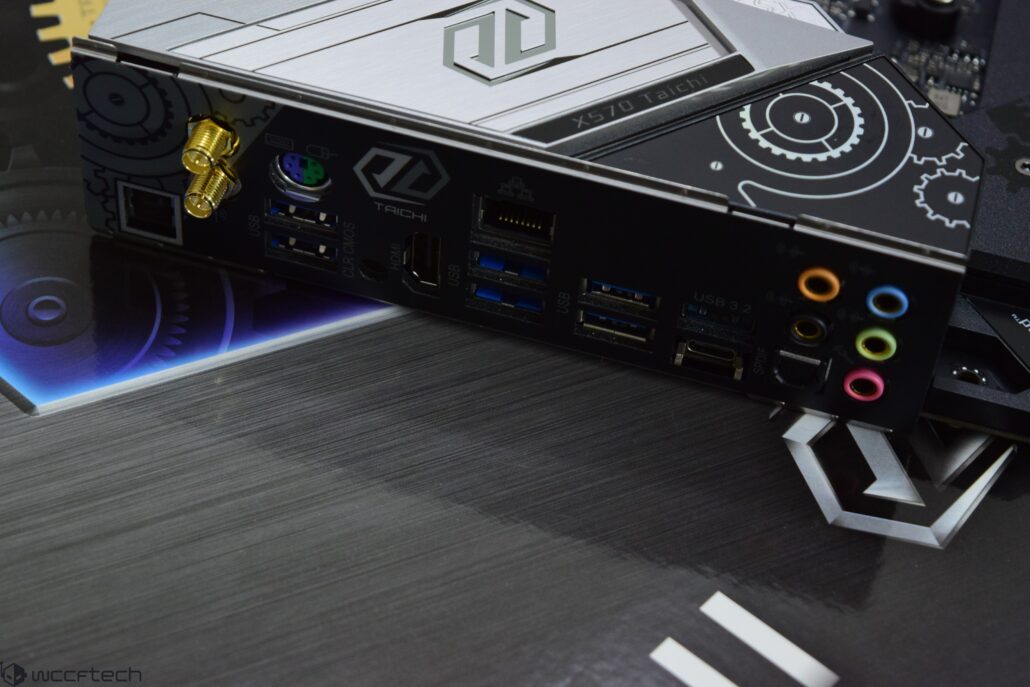