Resident Evil 4, one of the most popular entries of the Resident Evil series, is soon going to be released again on PlayStation 4 and Xbox One, but PC players will still be stuck with an older version of the game, which has been released a while back. Thankfully, the dedicated work of the creator of the Resident Evil 4 HD Project will allow PC players to enjoy the game with vastly improved graphics and textures. A few hours ago, some new screenshots and a video have been shared, showcasing some of the improvements of the project. 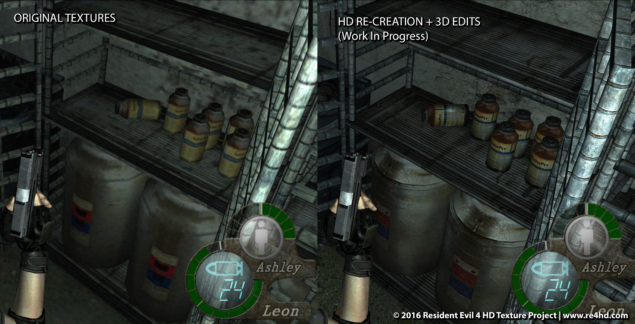 The new Resident Evil 4 HD Project new screens and video cover the 2 rooms prior to the truck area. Almost all textures have been recreated and a few 3D edits have also been made.

This week’s update will cover the 2 rooms prior to the truck area.
I’d say they were a piece of cake after all the previous Island rooms… As you can see, both rooms are quite plain and boring compared to what we’ve seen so far.

Almost all textures were re-created this time and just a few 3D edits were needed for the ugliest-looking elements.

Needless to say, the project is looking better with each new update, so make sure to check out the video and the screenshots below if you're a fan of the classic Capcom game.

One month ago, another video and some screenshots for the Resident Evil 4 HD Project have been shared online, showcasing the recreation of two different rooms.