DOOM was defined at Bethesda's E3 as the game that set the standards; the game that introduced first-person shooter games to the world' and the game that revolutionised the gaming industry. Developed by id Software, the game was showcased at E3 and it looked amazing. I still remember checking the game out on twitch live feed and going wow all over it. 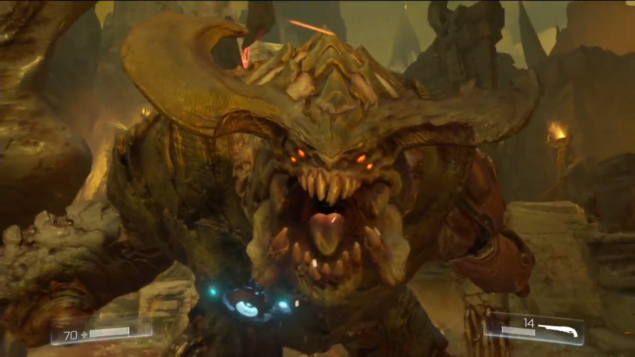 Original DOOM or a Filtered Version?

Ever since its trailers and announcements at E3, DOOM has been a highly debated topic across the gaming world particularly because it stunned everyone with its amazing visuals and fast gameplay. The enormous level of debate attracts photoshoppers to show what they have to showcase and that is exactly what is happening to DOOM right now. Below is the screenshot comparison of the real DOOM showcased at E3 with a version where "andritsu" has removed the games yellow filter and added some other touches of his own.

The first screenshots are the original one's and the one's following are those photoshopped to remove the yellow filter.

His own thoughts on the screenshots are as follows:

"A series of official DOOM (2016) screenshots where I've removed the yellow filter the game is drenched in using some quick colour balance adjustment. In my opinion it looks a lot better and I think many others might agree."

Well, I don't know about you but I for one, agree that the game looks far better without the overused yellow filter that it has on.

DOOM 4's (or just DOOM's) multiplayer is also under development and id software is adding some very cool touches to it. In the multiplayer version, the game will allow you to customise your own maps to a huge extent and then share them online and side by side play with several weapons which include chainsaws, chainguns, plasma rifles, rocket launchers, BFG (Big Fucking Gun) and ofcourse, the double barreled shotgun. You can read more about the multiplayer version of the game here.

The game looks quite awesome honestly and I for one will be waiting to more of it before its release which is scheduled for Spring 2016. We will keep you updated with any news on DOOM. Until then, do share your views with us in the comments section.