At E3 2015, Bethesda also showcased the first Doom Multiplayer gameplay video which is just as impressive as the single player campaign. Although short in length compared to the gameplay and single player hell videos which were also showcased, the multiplayer gives first sight an interesting developments we could expect from the next chapter in the iconic FPS title that is DOOM.

When the game officially launches in Spring 2016, we can expect both, a great Single Player campaign and intense Multi Player action. What Bethesda showcased today was nothing short of amazing. The gameplay showcased several players playing against each other, against AI controlled enemies and even player controlled monsters such as Revenants. Players were able to use hellish powers which were widely available in the single player campaigns on Doom 1 and Doom 2 and to some extent, even in Doom 3 with the soul cube. The return of these powers along with fast paced action shows the Id has revived one of the most renowned games of all time in a spectacular manner.

Players will be able to choose from several weapons which include chainsaws, chainguns, plasma rifles, rocket launchers, BFG (Big Fucking Gun) and the iconic double baralled shotgun. There will be several maps available to users and several modes all made using the latest IdTech 6 or IdTech 666 engine as the team at Id terms it internally. The more fascinating news was Doom SnapMap which is a new content creation and sharing tool that allows cross sharing and usability of custom user made content on both PCs and Consoles. This is a huge leap and is probably the first time we are seeing custom content creation for both PCs and next generation consoles. Using the mode, custom maps, weapons and game mods can be mode and users can easily grab them from Bethesda Net sharing panel which was also announced during the showcase. You can see more details in the video below: 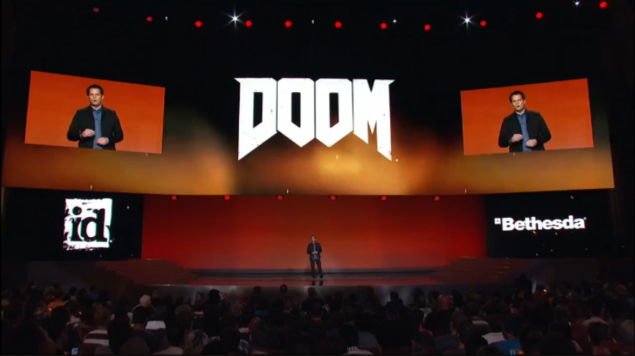 You can view the full schedule for Bethesda’s events below: