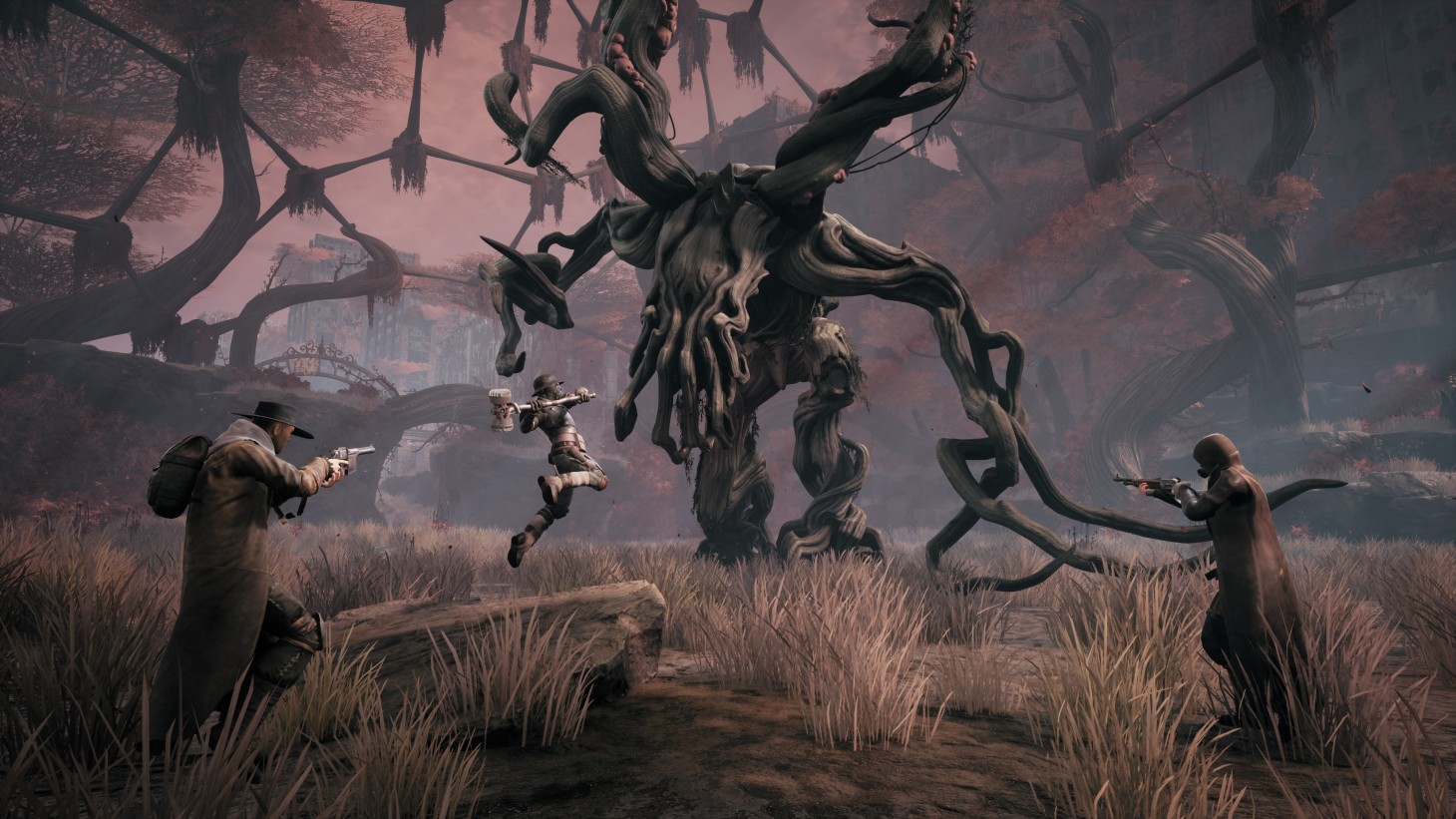 Evil Tree people was something I didn’t quite understand until I saw the statues at the entrance to an event I was attending. Trees at their most fearsome are just a big tall plant and need one hell of a storm behind them before they could really be considered dangerous. But the large, imposing, and unpleasant organic creature that greeted me was nothing like I imagined the enemies of Remnant would look. Its unsettling visage transplants humans natural apprehension to all things tentacle-y with slithering roots that make up most of its body, making these creatures a fantastic introduction to Remnant: From The Ashes.

Remnant: From The Ashes can, if you’re not sick of the shorthand, be described as cooperative Dark Souls with guns. There’s a health bar, stamina bar, and tough enemies that seek to quickly deplete both. Healing takes a few seconds, leaving you exposed, and checkpoints often involve your character resting as if at a bonfire. But despite what might look like another Soulslike, Remnant feels almost entirely different from the famous From Software franchises. 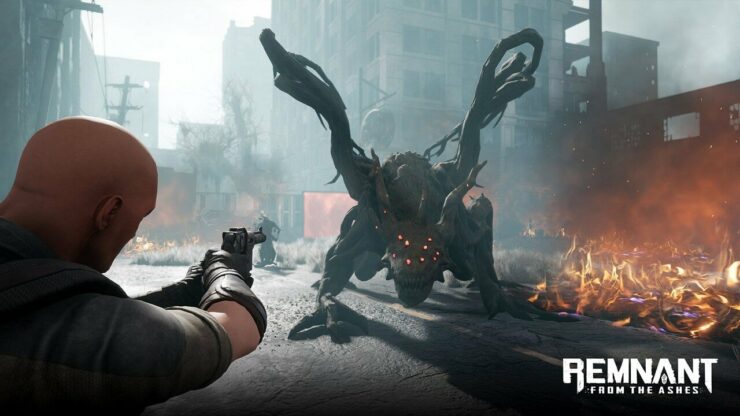 For a start, the focus on ranged combat opens up the maps, with larger spaces and passages to explore and attempt to survive in. Even the typically cramped locations like the sewers and subway tunnels I was able to explore in the demo had more open spaces and room than I expected at first. This also adds a little speed to the game's action as well, as monsters rush to close the distance or fire from afar as soon as you spot them.

But the biggest difference is the cinematic satisfaction you feel when you’re right in the thick of the action. In Dark Souls, Bloodborne, and Sekiro, every victory and fight is a tense affair as you desperately try to control the situation. Here in Remnant, you embrace the chaos and look good doing it.

When a large beast came charging towards me dragging with a girder that would easily flatten a squishy human, I unloaded an entire pistol clip into this thing's face and when it raised its makeshift weapon I dove backward, simultaneously swapped to my shotgun, and fired both barrels as soon as I was on my feet. It felt cool and exciting, in a way that other third-person shooters or games like Dark Souls just don’t quite manage. 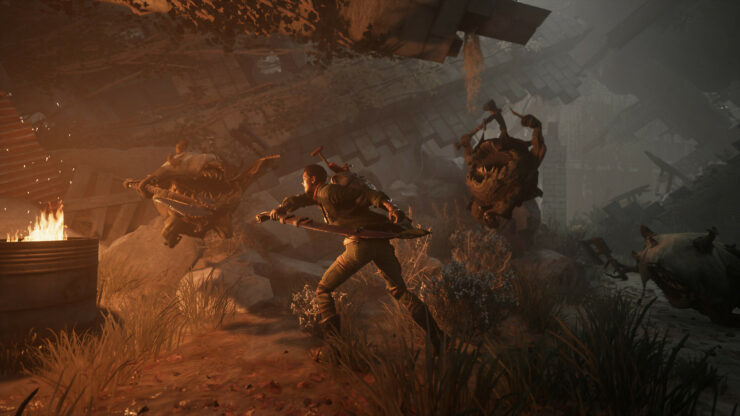 The action might actually be more akin to Horizon: Zero Dawn and the immense rush you get in those moments where you wield your bow like a true Nora Brave. While that game had unbelievably pretty vistas, Remnant has a darker tone. There has been a theme in games recently to reimagine apocalyptic settings as beautiful, the death and destruction of humankind muted by nature reclaiming the Earth. Remnant once again turns this back around, with its familiar city streets broken up not by lush pastoral colours and an almost tranquil stillness, but with sickly greens and purples, and slithering trees. It's pretty in its own way, with really impressive graphics, but it isn’t nearly as vibrant or connected to nature. And you’re not a Nora Brave, you are a demon hunter.

In another moment during my play session, I was caught low on health with three ranged enemies all priming attacks that would kill me. But rather than running I used my pistol to shoot each in turn over and over again, staggering their attacks and hoping I wouldn’t have to reload before they died. In that moment I was a cowboy, or a gunslinger.

And the gun feel in Remnant is second to none. It can be hard to say what exactly makes guns feel so satisfying in games, but the developers of Remnant have nailed it. Each bullet has tangible weight behind it when it fires, with exceptional sound design, and each hit is met with a clear feedback response by the monster. You’re never firing on an untouchable bullet sponge, and even your pistol feels like a powerful sidearm as you delve into the dark places to hunt the bigger monsters. 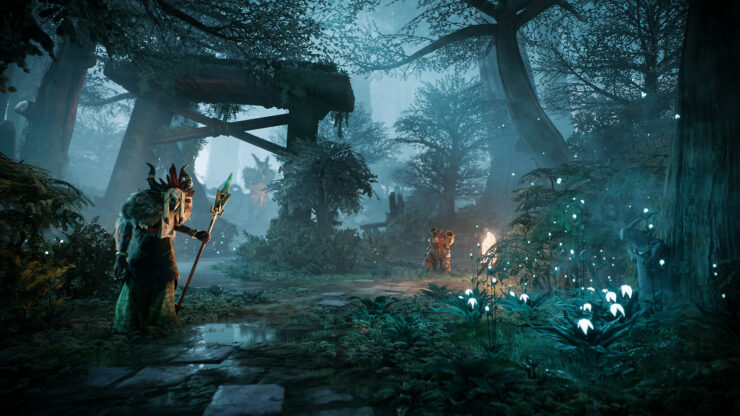 I had the chance to play Remnant: From the Ashes for about an hour before jumping into the three-player coop experience with two other people attending the event. I was feeling fairly confident I could handle it at that point, but Remnant kept throwing surprises at us. Enemies and bosses are random in the game, rearranging themselves and forcing players to adapt each time the play. On top of that, Remnant knows to ramp up the difficulty when you’ve got two other guns to keep you safe, but does so in a way that feels like survival is just within reach, and stays equally satisfying. The open maps also give you multiple routes to the same goal, allowing brave players to venture off alone, or find vantage points that can provide extra support for their comrades.

Gunfire Games (Darksiders III) is trying to do a lot with Remnant, from the look of the world and its unfriendly inhabitants to the combat system and the built-in replayability, and I only had a short amount of time to experience it all. Still, that taste has got me very interested in the title, and I look forward to seeing and trying more of the games different worlds when it launches on August 20th for PC, PlayStation 4 and Xbox One.