Finally, a new type of display has been designed by researchers in Cambridge UK, this new display can make real time holograms in actual. This can be appropriately used in movie theatres, on billboards and can be expected to be on our own televisions as well. 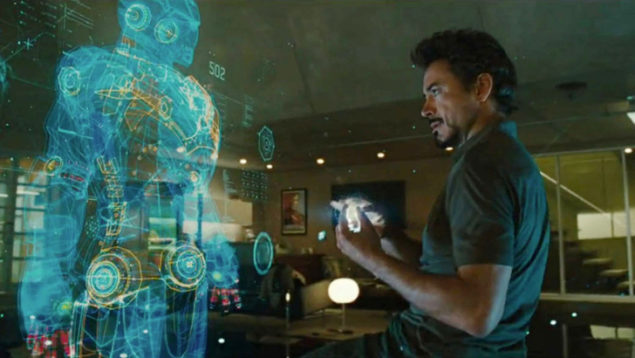 A hologram from the hit film Iron Man @Credit URL

This new kind of display actually plays with the reflection that takes place when you look at some picture or video in your daily life. When you look at a normal display, the light ultimately bounces back to your eyes in a way where little distortion and reflection has been in place but when you look in this new display that enables real time holography, the images are created by light that are actually bouncing from a grooved surface material. So when this happens, it seems as if the image you are looking at is separate from the surface it is originated from, making you feel as if you are looking at a three dimensional structure.

Many display technologies don't support three dimensional structuring however its been long that holograms are in place but controlling every pixel in order to change the display into holographic display is something extremely difficult for the researchers to administer. They are also data heavy displays so in order to process the tech that is used has to be quick and should be able to handle lots of information in a matter of seconds so that work can be done on time.

However, researchers from UK, University of Cambridge  applied nanostructure patterns in order to overcome this everlasting deficiency. These nanostructures work like small granules like optical antennae in the display which can be easily manipulated by streams of liquid crystals. This allows you to further adjust and change the optical properties of every single pixel.

"In a typical liquid crystal on silicon display, the pixels’ electronics, or backplane, provides little optical functionality other than reflecting light," lead researcher and engineering PhD student, Calum Williams, said in a press release. "This means that a large amount of surface area is being under-utilised, which could be used to store information. Optical nanoantennae produce a strong interaction with light according to their geometry," said one of the team, Yunuen Montelongo. "Furthermore, it is possible to modulate this interaction with the aid of liquid crystals."

Holograms are something that we've been seeing in a lot of movies since childhood and the concept of actually producing a 3D image with the help of this new display might even make many of our childhood dreams true. We're counting on you scientists, make us proud.