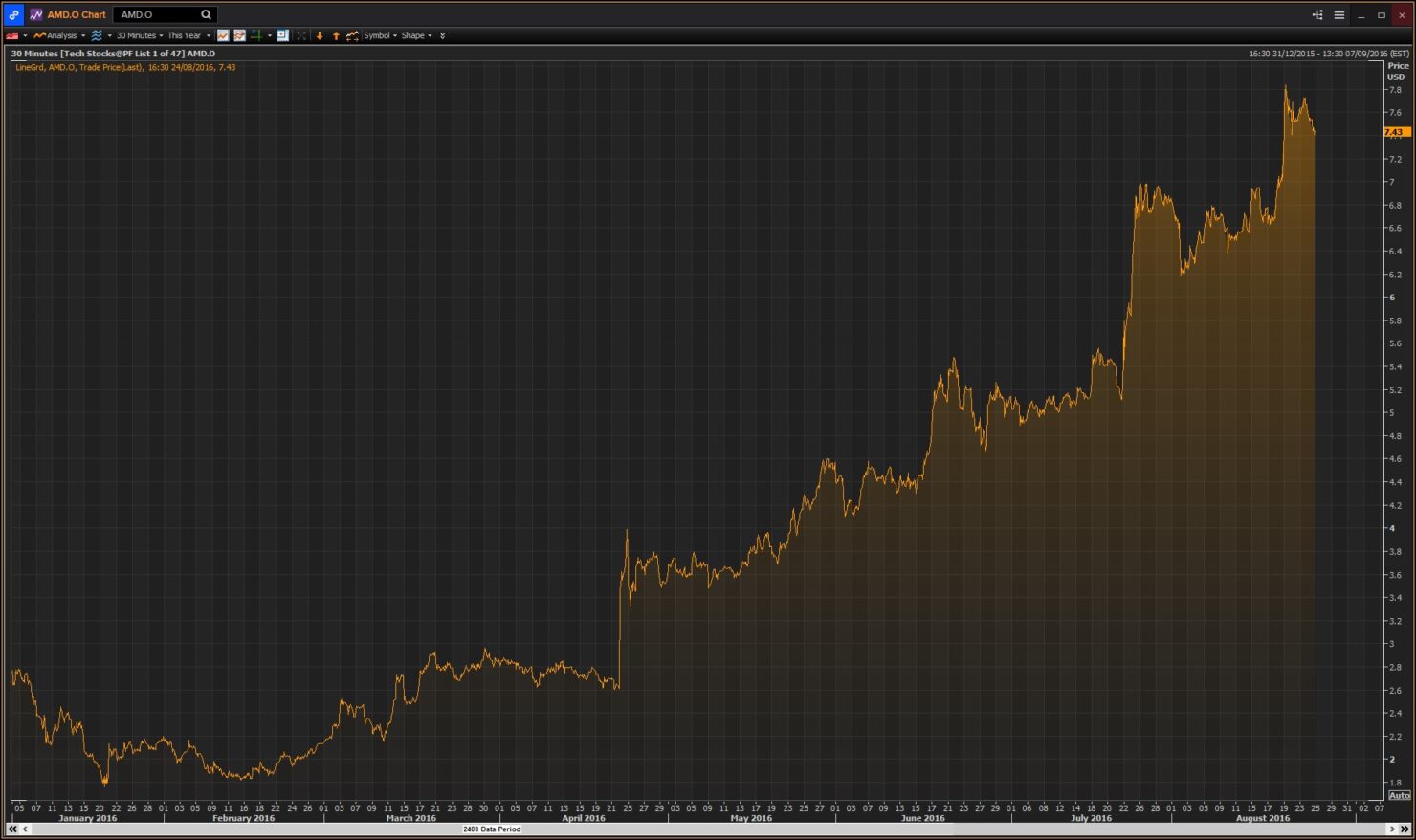 AMD's performance this year has been stunning...

AMD (NASDAQ:AMD) has been on a remarkable run. With a 52 week trading range as low as $1.65 and a high last week of $8, it’s currently sitting pretty at $7.46. But what has been the driver of this remarkable creation of shareholder value? Well, that’s where things get a bit more complicated.

It’s true, tech (and chip makers in particular) have driven a lot of growth in the market in recent times, being one of the best performing sectors in the S&P 500 for the last year, but let’s be realistic, although the tech sector is doing well, AMD is not riding the broader wave of the tech industry resurgence.

It’s certainly a factor which people may be considering in choosing their investments, but although AMD stock is up a lot, it’s not been the smoothest of rides to get to where it is today, let’s take a look at what’s going on.

We know that AMD has been working to get itself onto a turnaround trajectory. The company has spent years in the doldrums from a financial perspective which has been reflected by its poor earnings quality, relatively low valuation and in some respects by the performance of the products it makes.

Console design wins and once off payments are all well and good, but we know what mostly drives chip makers profits, namely performant products in the channel for retail and system builders/data centres seeing you as a viable alternative and placing orders.

AMD (NASDAQ:AMD) hasn’t been particularly competitive in the CPU space for quite some time. Similarly, although they have somewhat managed to keep pace with Nvidia in the GPU space, they always seem to be a trailing competitor.

Some of you may recall the piece I did previously discussing monopolies and monopolistic situations (here). I saw it debated both here and on Reddit among other places, lots of quotes were taken and used out of context. Of course monopolies in general are considered “bad” for the consumer, but the point of that article was not that AMD should be supported at all costs, more so that for AMD to be doing its job, it actually needs to compete effectively with both Intel (NASDAQ:INTC) and Nvidia (NASDAQ:NVDA) and turn itself around, giving its clients (whether retail or b2b) an incentive to buy from it again.

Well as things stand, the turnaround SEEMS to be in progress, but has it fully taken hold yet? That’s harder to call. Certainly the stock price would seem to indicate it is, but the question is does the stock price accurately reflect the value of the company? This seems not to be the case from a fundamentals perspective.

GPUs are an important product. Nvidia (NASDAQ:NVDA) has shown just how successful a business can be made from this one sector alone impressively. AMD has been lagging in market share for GPUs for a long time but with the launch of Polaris, AMD finally seems to be regaining market share, as indicated in the latest Jon Peddie report (source) showing AMD’s market share jumping to 29.9% from 22.8% last quarter and 18% a year ago. Sure, that’s a decent gain, but probably not enough by itself to justify the stock price surge this year. Also keep in mind that although its market share is on the up, AMD’s earnings last quarter (here), while decent, shows that there is still a long way to go for AMD (NASDAQ:AMD) to be considered a solid company financially. Additionally, it still isn’t fully competitive in the GPU space with Nvidia given that it is currently absent from the top end and effectively has nothing to compete with the 1070 and above yet, although the expectation is that Vega will obviously attempt to rectify that situation when it launches soon.

So we come to the other cornerstone of AMD’s turnaround strategy: Zen CPUs.

As I’m sure I don’t need to tell anyone on this site. Zen isn’t here yet. We are starting to see sniffs and hints and clues as to its performance (Ashes results here, AMD controlled test here), what’s been seen and said looks anything from reasonable to impressive, but there’s simply not a huge amount of data yet on which to pass judgement.

Ultimately a lot of these sniffs are what is feeding AMD. The underlying fundamentals of the company don’t seem to justify its current valuation as things stand today. 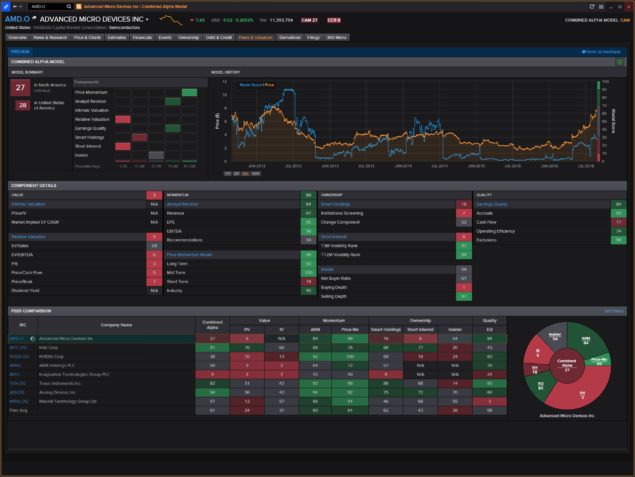 Momentum is a big driver...

AMD – An Exercise in Sentiment and Momentum

What does this mean? Certainly data such as what is available on Zen so far shouldn’t be ignored, sensible investors do well to acknowledge all relevant and material info, whether it supports their original strategy or not.

AMD’s (NASDAQ:AMD) rise to prominence has been a jumpy one and not for the faint of heart. Price jumps spike relatively quickly and sharply on the back of a lot of talk, similarly some fairly sizeable drops have also occurred, likely due to profit taking, but the overwhelming trend is an upward one.

Leaked benchmarks and company statements are gathering pace and the market is certainly pricing in a success with Zen, Vega and Polaris (already released but didn’t really hit earnings last quarter as it was only available for a short period of the quarter), expecting that AMD’s new products will both perform and sell very well.

Also keep in mind that AMD was a heavily shorted stock. At the peak (last November), short interest in AMD would have taken 19 days to cover, whereas we’re now down to 3 days.

That is by virtue of both the fact that SI in AMD has reduced from 14.8% to 9.1%, as well as trading volume in AMD jumping significantly, with an average daily volume in AMD shares being 26.8m for the last 100 days, 30.3m in the last 90 and a staggering 39.5m in the last 5 days. Keep in mind, as shorts cover their positions, this will also contribute to the increase in price.

So ultimately what we have is a very jumpy stock which is trading in all likelihood quite heavily on the basis of sentiment and momentum with expected future return and very little to do with the actual value of the company as it stands now.

Wise Man Saying: You can be right all day long, if the market thinks you’re wrong, get the *$£%& out of the way

The above saying is something of a joke, but also holds some truth. Positions which ride contrary to the market only make money once the market at large realises you were right all along and perhaps they were wrong. We’re clearly not yet in that territory and are unlikely to be until probably H1 next year sometime realistically depending on what comes out regarding Zen and Vega in the meantime. What we’ve seen of Zen isn’t much at this stage. Polaris is doing reasonably on the small amounts of data we have but Vega is still an unknown quantity.

Realistically, whether you think AMD is overvalued or not will come down to how well you think Zen, Polaris and Vega will perform, with Zen likely being the largest contributing factor. IF Zen does extremely well, AMD will likely justify its current lofty valuation in the medium term, and potentially more in time. The market has lapped up the news of Zen thus far, despite the small delay which now seems evident given that previously Lisa Su stated we would likely see some Zen chips hitting the shelves in Q4 this year, although that has now been pushed back to Q1 which was when the majority of SKUs were expected to hit anyway.

One also needs to keep in mind that even if AMD does a better job of competing competently from a technical perspective, it is likely that Intel and Nvidia have room to manoeuvre with their current pricing structures and can also pull the rug out from under AMD by reducing prices to make their products more competitive from a value standpoint. Remember too that the sales cycle into the enterprise space is typically a much longer one than it is for the retail market where a user just wants a PC. That much being said though, the enterprise is very conscious of supplier risk and typically takes diverse suppliers where possible to safeguard itself (particularly in mission critical tasks) against “putting all its eggs in one basket” so to speak. As such, it’s likely that AMD may make some small inroads into the enterprise if it is genuinely competitive, but certainly the majority of the market will be a medium to longer term effort to secure. One which AMD will need to sell significantly into to be successful.

Volatility? Why yes sir, load me up please!

Certainly on the strength of the current data, AMD looks overvalued at present, but obviously there is significantly material information coming in the next few quarters which the market has priced in overwhelmingly positively. That much said, implied volatility on AMD options is high compared to its two most relevant competitors with about a 40% spread to Intel on one month and a 45% spread to Intel on 8 month at the money options (by which time we should have a good picture of how the turnaround has gone).

The story vs Nvidia is a similar one with a spread of 26% on front month and 29% on 8 month at the money options.

Actual implied volatility on AMD at the money options sits at a staggering 55.9% for 1 month and 67.8% for 8 month as things stand. That’s a lot of uncertainty priced into the market so the cost of shorting either traditionally or synthetically is not going to be small for anyone who wants to take that route.

AMD is definitely well into its turnaround plan, the market seems to think it will be effective, keep in mind however that although Zen may be a great success, the tide of progress marches ever on. Keller is no longer at AMD and a successor to Zen will be required one day. Do they have enough other in house expertise to keep the wolf from the door in the long term? Time will tell, but certainly in the short to medium term, it seems like AMD may be onto a good thing.