Advanced Micro Devices (NASDAQ: AMD) Turns The Ship Around – Posts Earnings Per Share of 8 Cents on an Operating Loss of $8 Million for Q2 2016

Advanced Micro Devices (NASDAQ: AMD) has finally posted an operating income (on a non-GAAP basis) and a net income (on a GAAP basis) after a very long time. The company generated a revenue of $1.027 Billion on which it reported an operating loss of $8 Million and a net income of 8 cents per share (GAAP). The revenue of the company has grown 23% sequentially and 9% year over year, which shows healthy growth in AMD's market segments.

"In the second quarter we accomplished a significant milestone as we returned to non-GAAP operating profitability based on solid execution and strong demand for our semi-custom and graphics products," said Lisa Su, AMD president and CEO. "Based on the strength of our semi-custom products and demand for our latest Radeon RX GPUs and 7th Generation A-Series APUs, we are well positioned to drive growth and market share gains in the second half of the year."

AMD  (NASDAQ: AMD) had a rather good quarter, in-fact, the result has been so well-received that the share price (at the time of writing and in Pre-Market) is up almost a full 10%! It is currently at $5.72 (Pre-Market) which is around 9.58% more than last day's close. 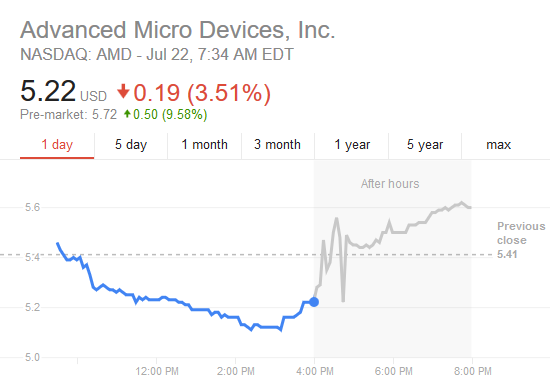 Revenue growth was driven by the semi-custom business. This includes its agreement with Sony and Microsoft to provide them with APUs for the current generation and next generation consoles. AMD's operating expenditures have been declining for the past couple of years and after closing the deal with Nantong (NFME) they are expected to decrease even further. The company does not have any term debt maturities due until 2019. Since sales from the GPUs and Zen will mature in 2017, that remains the year which will decide the fate of the company for the long term.

As far as AMD's (NASDAQ: AMD) segments go, the computing and graphics segment saw a seasonal quarter to quarter decline of 5% (clocking in revenue of $435M as opposed to $460M last quarter) but saw healthy growth of almost 15% year over year. The semi-custom SOC business increased 59% this quarter due to the business cycle and 5% year over year. This is also the only segment in AMD's division which posted an operating income (of $81 Million). Computing and Graphics, and all other categories posted operating losses of $92 Million together. 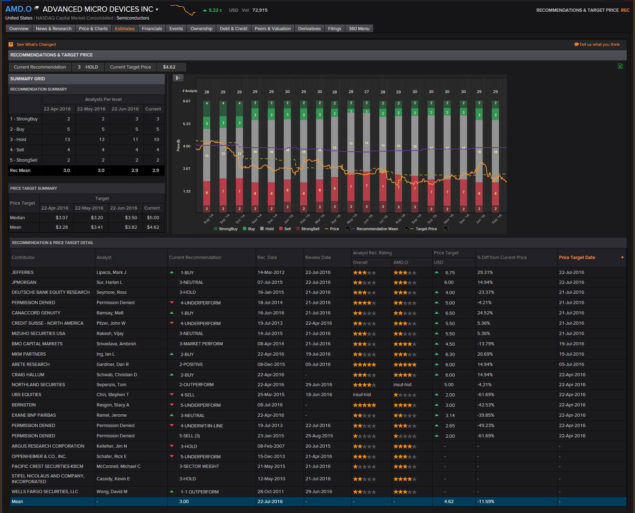 Analysts are starting to agree with followers of the red giant on the future upside of the company.

The company has reported a very interesting mix of financials this year. On the GAAP side, they have an operating loss but a net income, while on the non-GAAP side, they have an operating income but a net loss. So what exactly does all of this mean? Well, I will be going through a detailed analysis and breakdown of the hows and whats of AMD's return to (op) profitability.

The company reported an operating loss of 8 Million dollars, yet eventually, we are seeing a net income of $69 Million. So how does that add up? To keep things coherent. I will be comparing GAAP components to Non-GAAP components and showing you how everything adds up. Lets start with the difference in operating income.

The reason for this discrepancy is that under Non-GAAP measures, AMD is allowed to recognize stock-based compensation (roughly $18 Million in income) and must deduct restructuring and other special charges of $7 Million. So the primary income driver here is the increase in AMD's share price, which has jumped quite a lot in the past few months. The nature of this driver is not sustainable in nature and does not reflect intrinsic growth since its basically a feedback loop from the share price.

The reason for that is that under GAAP measures, AMD is allowed to recognize the cash proceeds from its ATMP JV as other income gain. Which it did. It recognized $150 Million out of the $352M cash proceeds and that is what it primarily used to turn around around the ship. Since this is a one-off gain and not something sustainable, it is not recognizable under Non-GAAP basis. So if you ignore the $150 million one-off gain, deduct the special restructuring charge while adding the stock compensation gain as well as the provision for taxes you get the net loss of $40 Million. Which is a much more accurate reflection of the current state of events, for investors that are in it for the long term.

We also noticed some decent growth drivers in AMD (NASDAQ: AMD)'s financials. The revenue increase itself speaks volumes for the company. After almost 10 % increase over from last year, the company is on a very bullish trend. The company shifted to 14nm FinFETs and introduced its RX lineup of GPUs spear headed by the value monster - the RX 480. The full financial impact of the the RX 480, RX 470 and RX 460 moving in volume is not present in these financials, not to mention the company is on track to reveal Zen shortly. In other words, all indicators for intrinsic growth are present in the company, we just have to wait for them to mature.