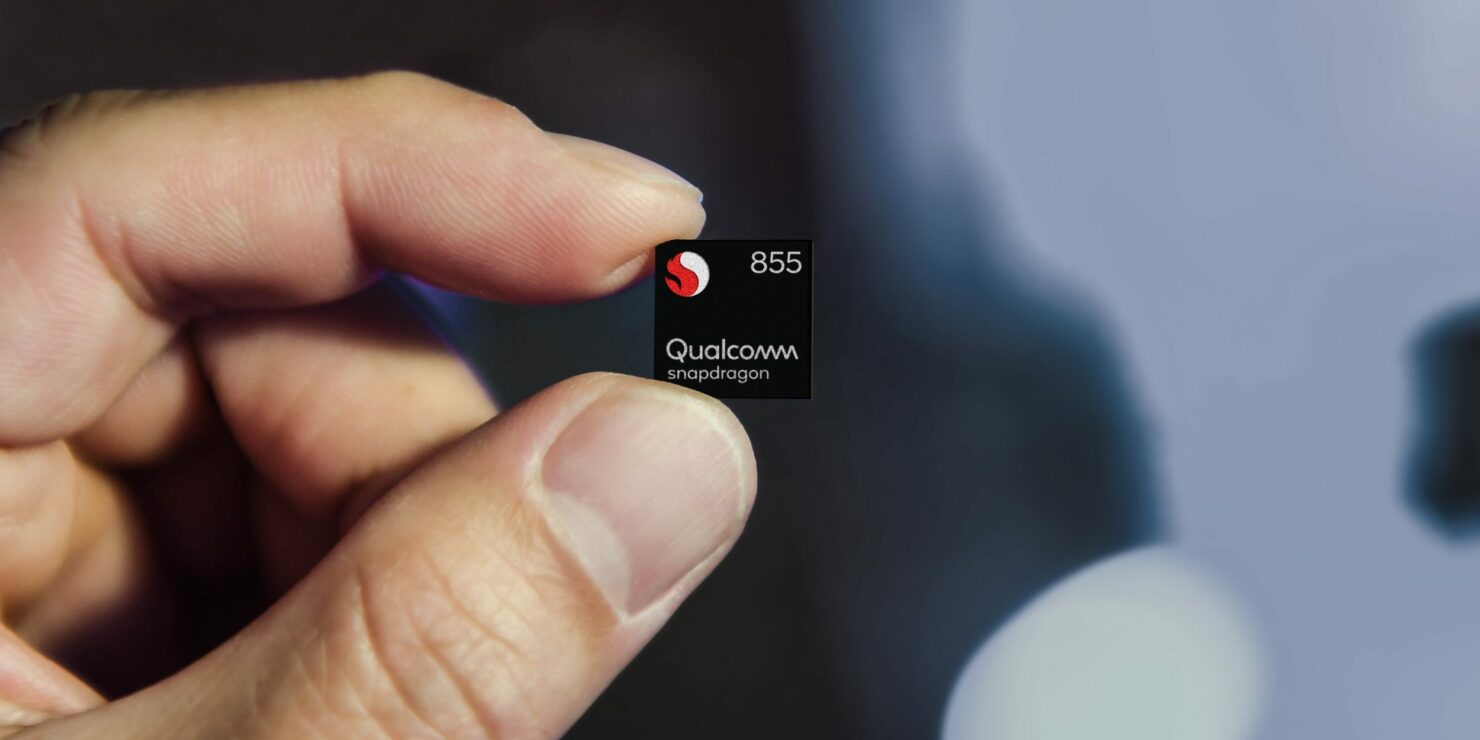 San Diego chip giant Qualcomm (NASDAQ:QCOM) announced its fourth-quarter and fiscal year 2019 earnings yesterday. The company reported $4.8 billion GAAP revenues for the fourth quarter and a net income of $500 million. Revenues were down 17% from the year-ago quarter and net income was up by $1 billion to $506 million, following the $513 million loss that Qualcomm reported in last year's fourth quarter. Now, in the day after its earnings, Qualcomm's stock is up by 8.9% and is trading at $92.14.

Longer smartphone upgrade cycles have hurt a lot of companies of late. Cupertino tech giant Apple, for example, has been actively trying to entice users for an upgrade. It launched the iPhone XR last year as an 'affordable' alternative to the higher-priced iPhone XS and iPhone XS Max. However, the simple fact that the iPhone XR is branded differently than its compatriots, and the fact that Android gadgets within a similar price bracket offer similar features didn't let the device take off.

Qualcomm's facing a similar dilemma. Huawei's massive growth in China has stopped smartphones with Qualcomm's hardware from selling. And given that China is one of the two countries that have rolled out 5G globally, unless devices with Qualcomm (NASDAQ:QCOM) hardware ship in the country soon, the company will have missed out on a valuable opportunity to make sure that its products are inside users' hands. 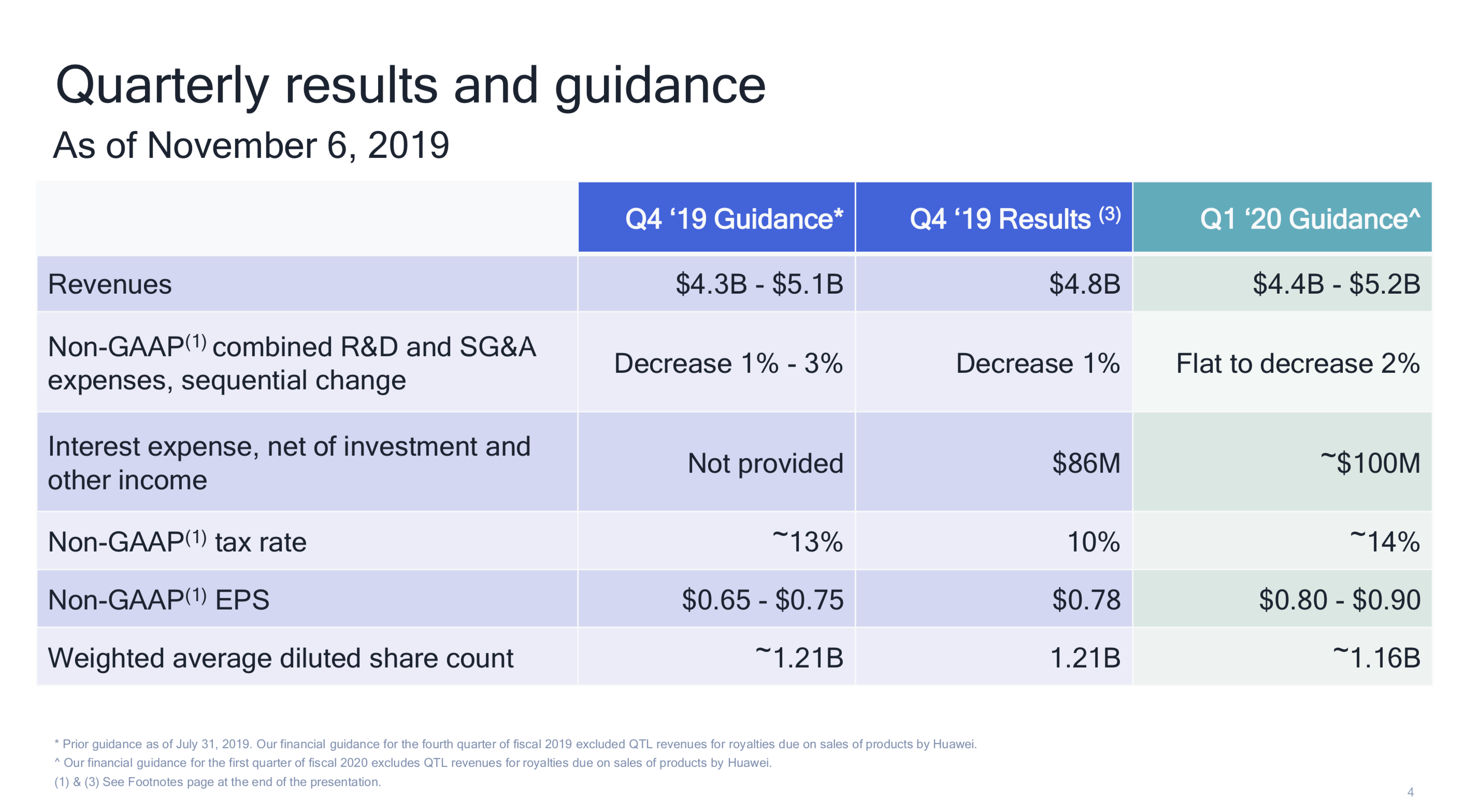 The bulk of these was from a $6 billion charge due to the Tax Cuts and Jobs Act and a $2 billion termination fee paid to NXP semiconductor. Qualcomm, through its subsidiary Qualcomm River Holdings B.V had initially planned to acquire NXP semiconductor, but the deal did not follow through due to a lack of regulatory approval from Chinese authorities. 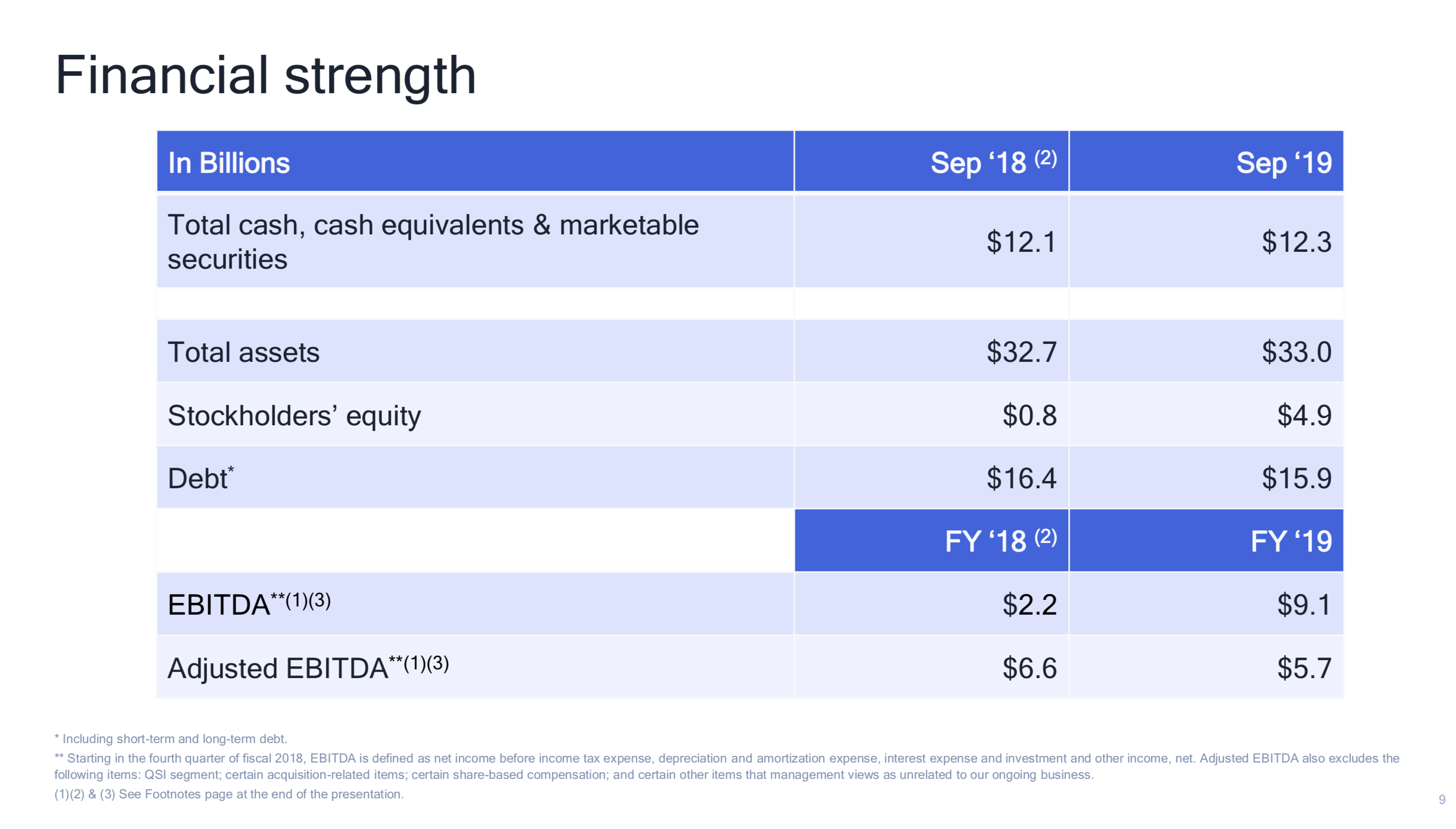 A big highlight of Qualcomm's earnings call is the amount paid to it by Apple for settling multi-year royalty disputes. The company's partnership with Apple forms a big part of its latest earnings release and future, but we'll get to that in a bit. Qualcomm's known for its stringent licensing agreements (as Samsung would attest) and Apple's known for being hard-headed when it comes to litigation. However, both have realized the urgency to cooperate due to the impending boom of 5G connectivity all over the globe.

Huawei's decision to manufacture smartphone chipsets internally has hurt Qualcomm (NASDAQ:QCOM) as the company expects to ship in between 608 million - 628 million MSM chips this year. This will mark a 196 million - 176 million drop from the chips that the company shipped last year. Qualcomm's expected to launch the Snapdragon 865 next month, and an alleged benchmark for the processor has suggested that it won't perform on par with Apple's A13 processor found inside the 2019 iPhone lineup. 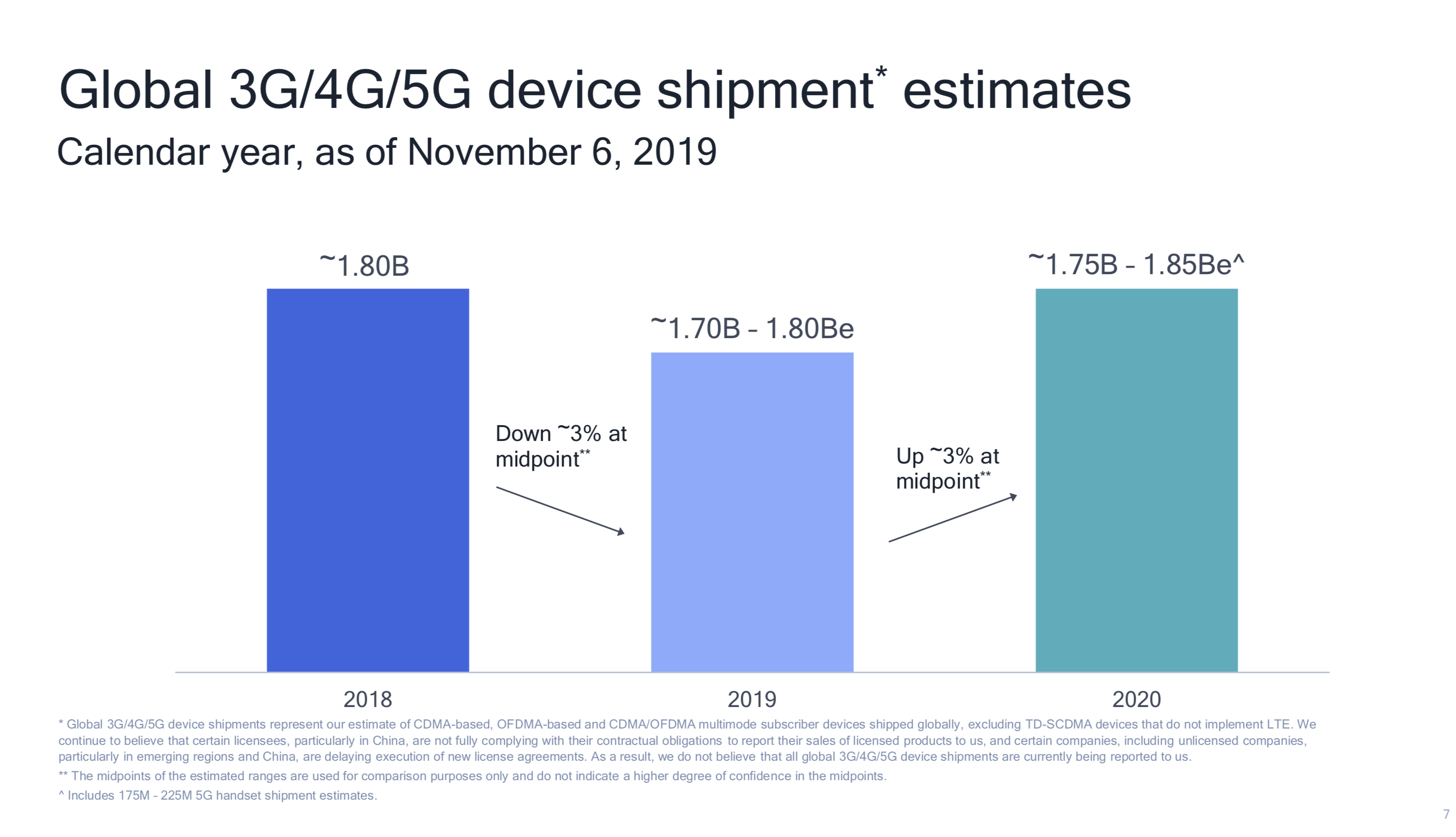 Qualcomm expects to earn between $4.4 billion - $5.2 billion in revenue for 2020's first fiscal quarter. The company believes that an uptick in 5G demand will help it achieve the target. Qualcomm's estimates suggest that 3G/4G/5G shipments will lie in between 1.75 billion - 1.85 billion in the calendar year 2020. These will form the backbone of guidance that has helped the company's stock jump by 8% after trading commenced today.

Out of the optimistic 1.85 billion cellular shipments that Qualcomm expects will help it gain revenue next year, 225 million will belong to 5G modems. Qualcomm (NASDAQ:QCOM) currently offers the Snapdragon X55 modem for 5G connectivity, but this is a standalone modem that isn't housed on any of the company's system-on-chips (SoCs). The upcoming Snapdragon 865 is rumored to be Qualcomm's first SoC with integrated 5G connectivity, bringing down power consumption. Qualcomm's CEO Steve Mollenkopf also stated that 230 5G phone models are now based on the company's chips.

In 5G, Qualcomm's agreement with Apple will help the company go a long way - at least in the near-term. Apple has not launched a 5G iPhone, but the company will introduce the next-generation cellular connectivity on the iPhone 12 lineup due to launch in 2020. The fees earned from this launch will help Qualcomm earn some serious cash, but whether the company can make a presence in China's 5G sphere is unclear. 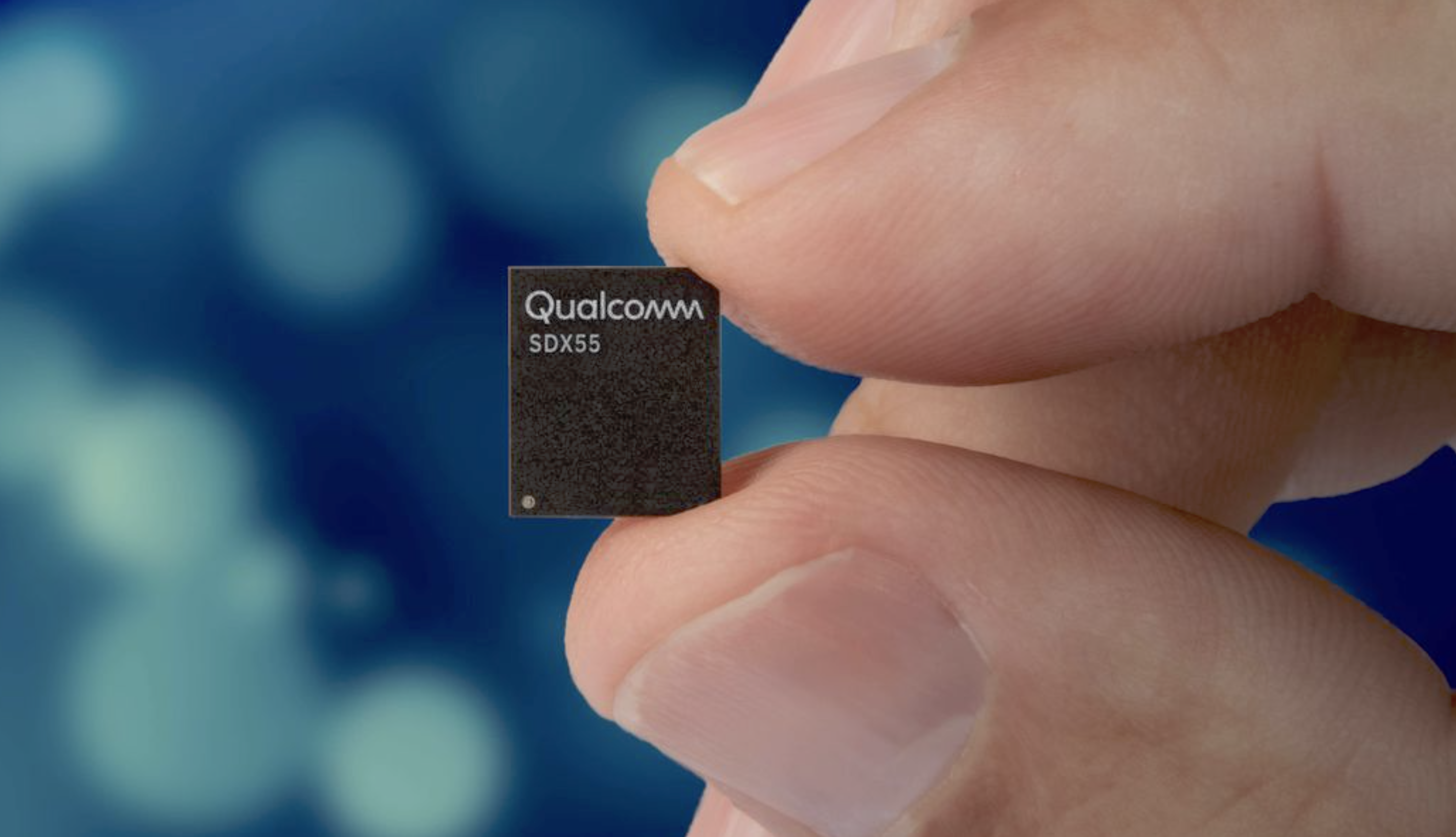 Qualcomm's Share Price Up By 8% During Intra-Day Trading But Can Company Capitalize On Promised 5G Growth?

The bulk of Qualcomm's optimism present in yesterday's earnings call rests on 5G. The company believes that sales inside the United States will help it make up for a modest financial performance of late. Additionally, having the iPhone ship with Qualcomm's modems will earn the company a nice premium especially as Apple only targets the high-end smartphone segment with large average selling prices.

Qualcomm is currently trading at $91.30/share after having opened at $89.93 today and the stock has gained 43% over the year. While Qualcomm's patching up with Apple will help the company, this won't be a permanent or a long-term revenue generator. Apple's already bought Intel's wireless patent portfolio, and the company will develop its in-house modem solutions to end dependency on third-party suppliers for this crucial technology.

Qualcomm (NASDAQ:QCOM), therefore, needs to target China if it's to stay financially healthy. However, Huawei's the king of China's smartphone market and Qualcomm's partners in the country have failed to bring in big numbers. Following its earnings release, Cowen raised Qualcomm's price target to $100 per share from $80 per share. UBS maintained a Neutral rating and raised its target to $87 from $73.