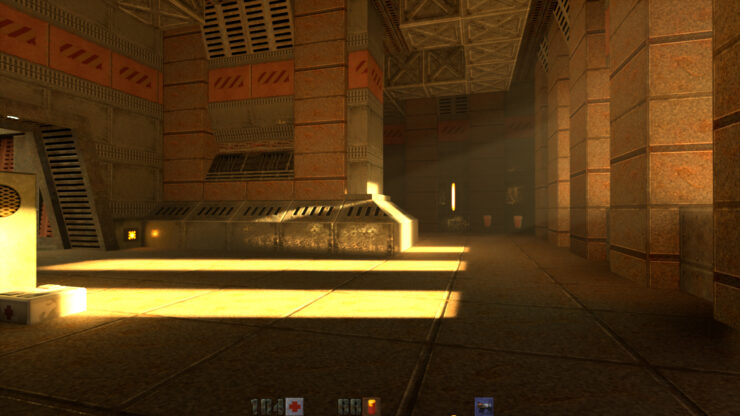 Quake 2 may be a 22-year-old game and run on just about anything with an electrical current, but that's not what Quake 2 RTX is about.  What started out as a mod to Quake 2, by Christoph Schied, known as Q2VKPT (Quake 2 Vulkan Path Tracing) is now a full standalone release thanks to the team at NVIDIA and Lightspeed Studios.  While on the surface many are going to instantly dismiss this as a simple marketing tool for NVIDIA to sell more RTX cards and while they're using it for marketing, you simply cannot discount the reality of what is going on here.

In previous RTX titles, there has been been a pick of techniques from the RTX library used in Hybrid Ray Traced rendering; Battlefield V uses Ray Traced Reflections, Shadow of the Tomb Raider uses Ray Traced Shadows, and Metro Exodus uses Ray Traced Global Illumination.  But, Quake 2 RTX is entirely ray traced, or path traced rather, meaning there is no traditional rasterization going on here.  So essentially, there are zero traditional methods, outside of the geometry being built, here resulting in a pretty intense change of delivery.  Sure it's a 22-year-old game but if you don't think what is going on here is an insanely computationally intensive act then you have a bit more homework to do.  This is not a simple filter and Quake 2 RTX is not a 22-year-old game, it is all new and not an easy feat to pull off.

Quake II RTX will include the first three stages of the main campaign only, but owners of the original release will be able to play the full game with ray tracing enabled. The improvements made on the game include:

Quake 2 RTX does feature the ability to change time of day as well as which world the maps take place on, I've included a few screenshots below from the same time of day (dusk) just to show the difference the type of sky can make.  This is useful for those who felt the change in the juxtaposition above and the video below didn't really reflect the original atmosphere of the game since you can run with the original skybox and bring back that sensation.

Since Quake 2 itself is a classic game and has always had its own way of benchmarking we wanted to take it back a bit in the testing methodology with Quake 2 RTX.  Rather than set up a repeatable course and go with the traditional AVG, .1%, and .01% lows we're going with just averages as a result of the Time Demo test that you too can run following these steps

We tested with the game in the first launch configuration that only uses a single bounce of lighting, so global illumination was left at Medium and time of day was dusk. I wouldn't recommend trying to run GI at High for the second bounce unless you are looking for a bad time or taking screenshots.  And for those who are wondering why Radeon cards aren't present, I did attempt to get the Vega cards working, but with no luck, perhaps one day RTG will put out a DXR compliant driver.

I can already see the groans about why even look at 720p, and honestly, it is because of the age of the game. Even prior to the RTX release of the game when I play classics like this I run them at lower resolutions so that they keep some of that grit that I remember and they were typically not designed with resolution scaling for the HUD resulting in unreadable dialogue and information markers.  But this shows that when fully path traced it really took going to the Turing architecture to get over a 30fps mark and basically the minimum requirement of an RTX 2060 is not just a suggested minimum, but an absolute minimum. 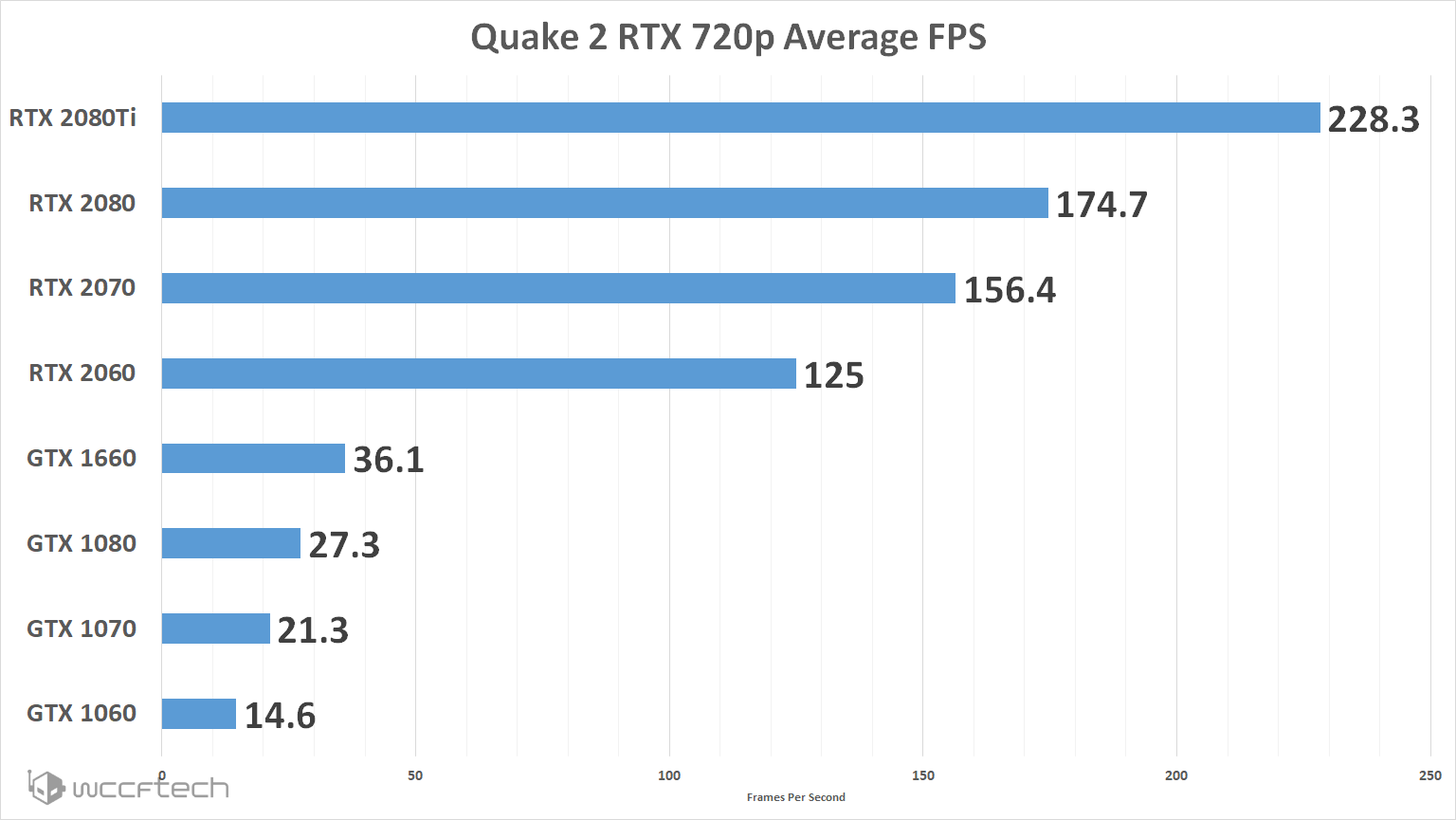 Full HD starts to really put a crunch on performance as the pixels increase substantially and that increases the load and demand even more so when fully path traced than it does with traditional rasterization.  The RTX 2060 was able to hit a 60fps average here but showing the advantages of the higher end cards and the raw power they pack really benefit them. 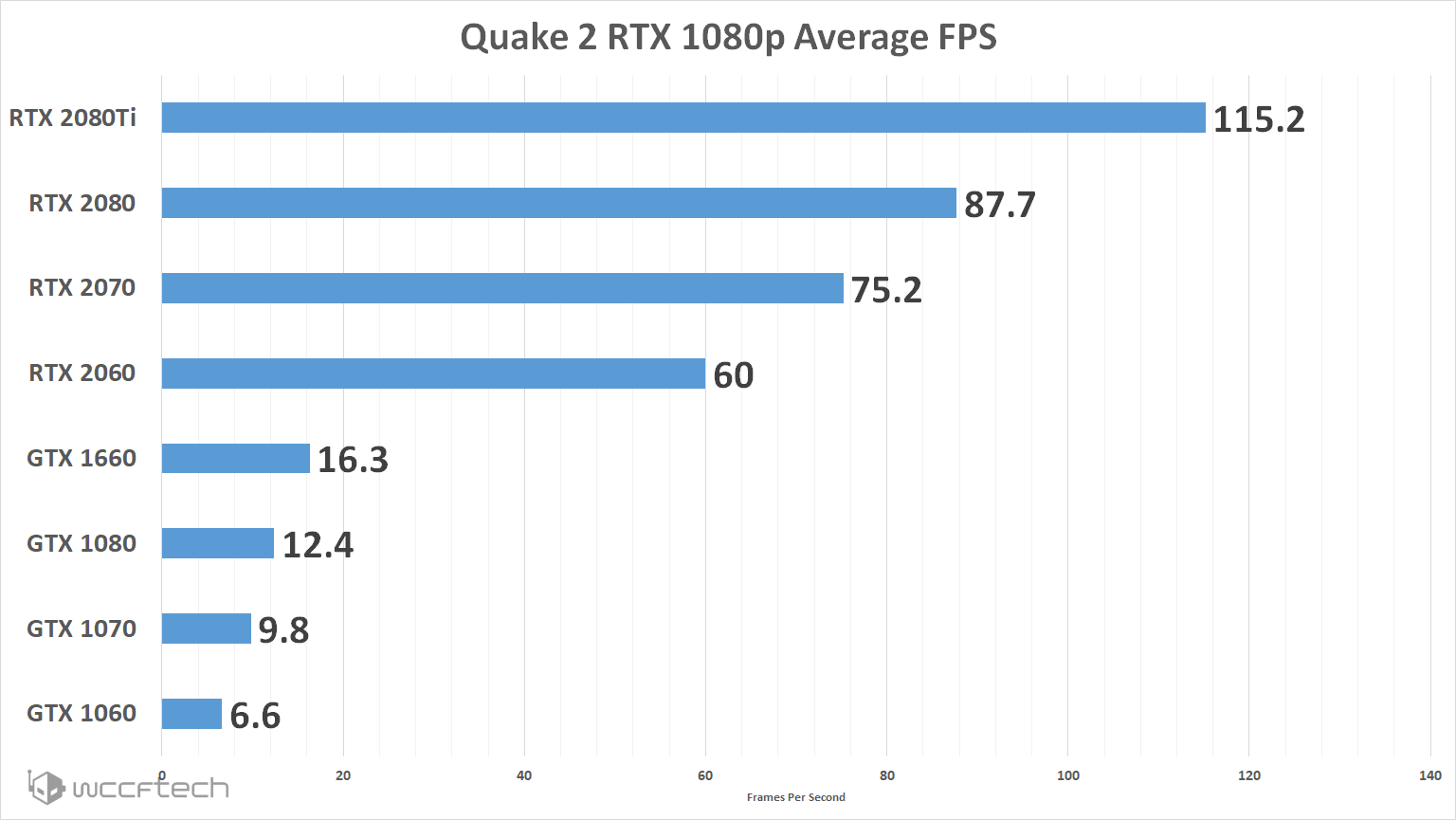 Looking over these results anything under the RTX 2080Ti with its massive 4352 Turing cores and additional RT cores is simply going to deliver sub 60fps performance.  Even NVIDIA noted that this title would be optimally run at a 1080p resolution, and these results show why. 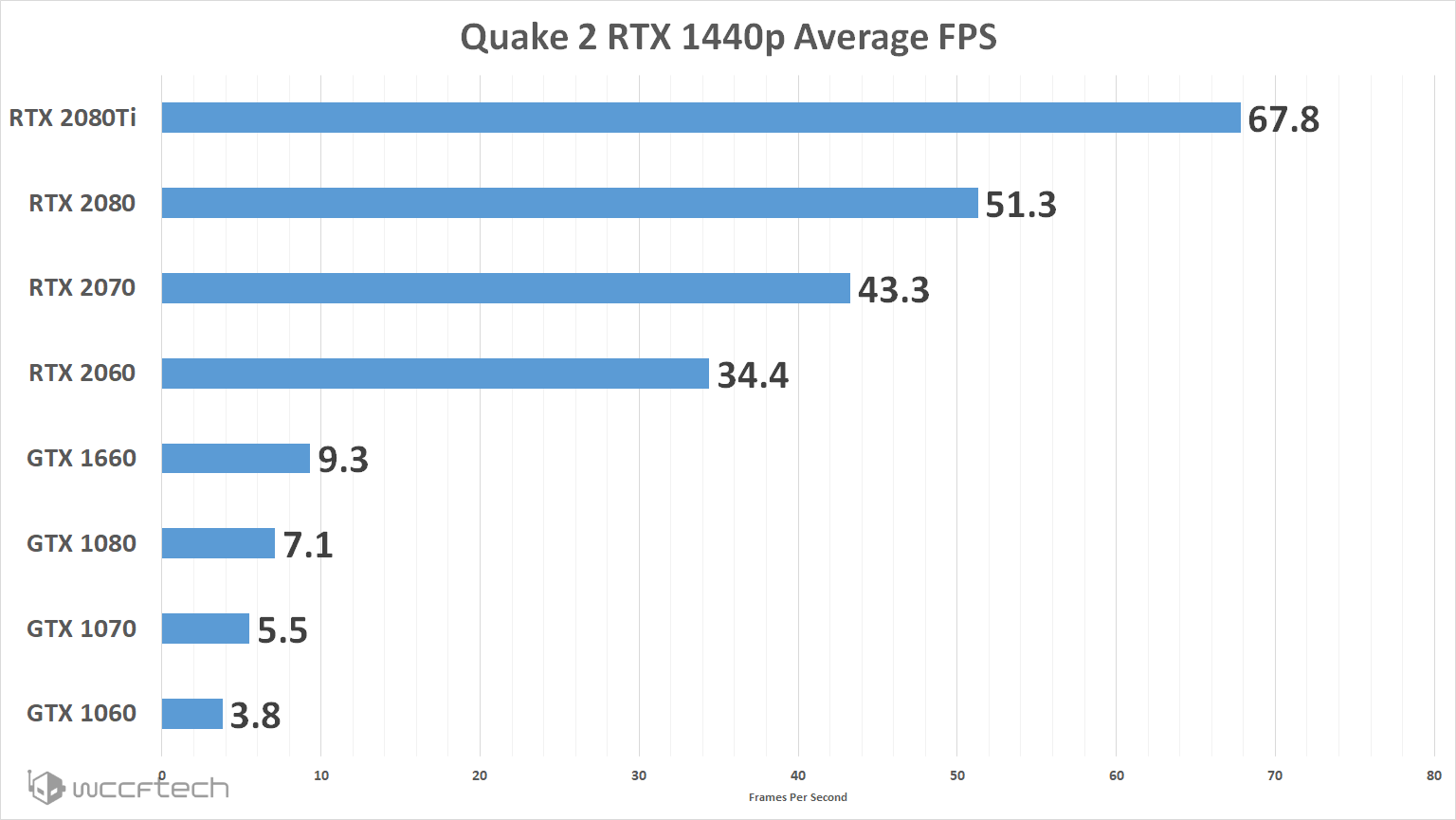 Okay, UHD is a two-fold monster here. First off, running it is nigh impossible at an acceptable frame rate with only the RTX 2080 Ti being able to crest 30fps which doesn't result in a good experience for this game.  Secondly, there's no real visual benefit outside of screenshots, I still am of the opinion that anything over 1080p in a game like this is just a net loss, performance tanks here and visuals just do not get any better. 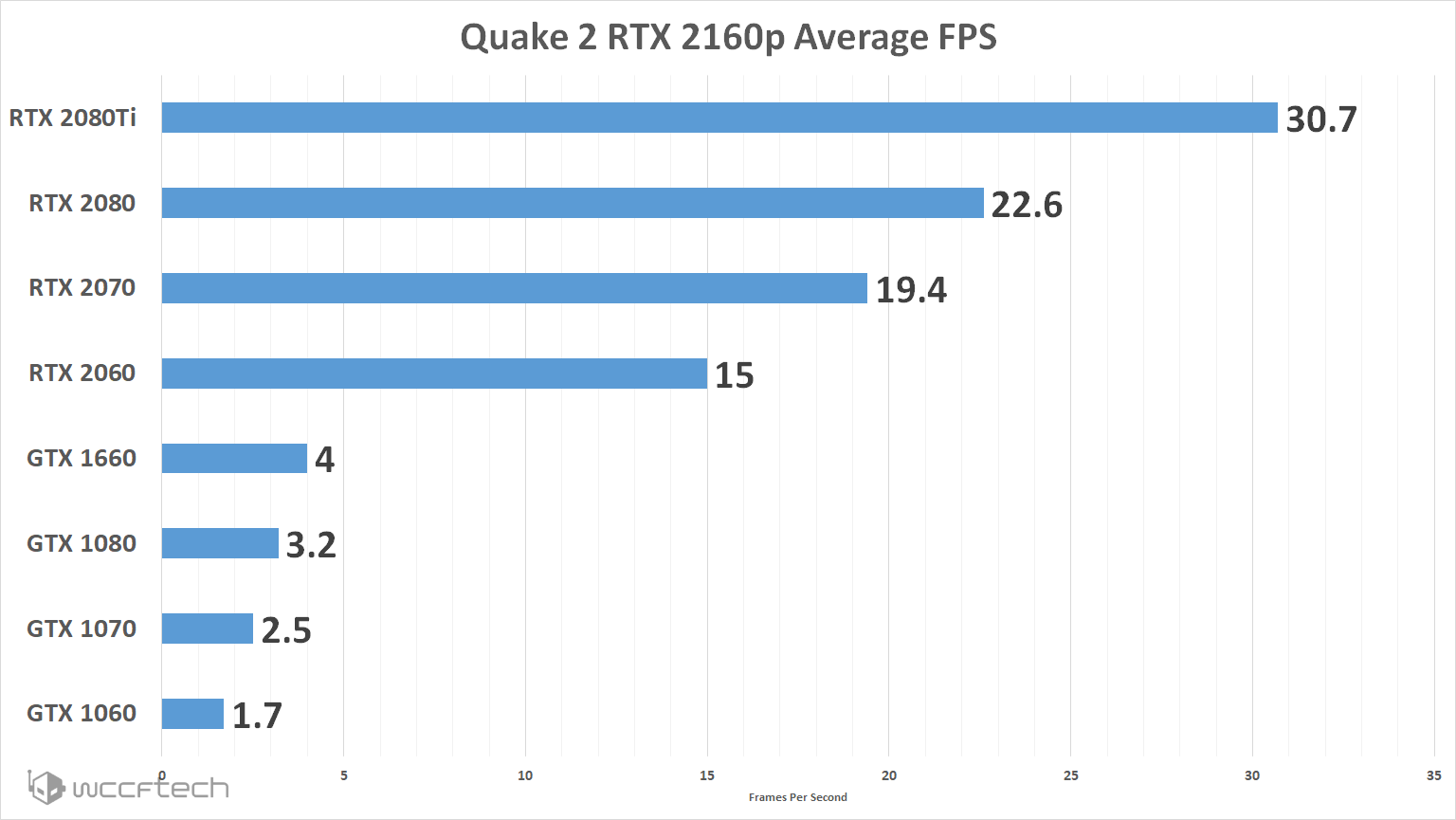 If raw performance is what you're most concerned about then you might be disappointed, but if the technological achievement that has been achieved is what you're looking at you're looking for you are going to find polarizing responses to Quake 2 RTX.  Performance numbers junkies will be left wondering why performance is so low and why can't it run a 22-year-old game better, but a visual technology junkie will look at this and think it is simply spectacular that it is happening at all. Older cards like the Pascal and non-RTX Turing lineup simply don't have the underlying specialized hardware to make this a remotely playable experience, but those with RTX Turing and tempered expectations can get a really cool glimpse at what the future may hold and a very interesting revisit to a great classic. And, no you don't need a $1200 graphics card to experience as a game like Quake 2 doesn't benefit much, if any, from going past 1080p and I actually prefer playing it at 720p regardless just to retain some of that grit from back in my youth.