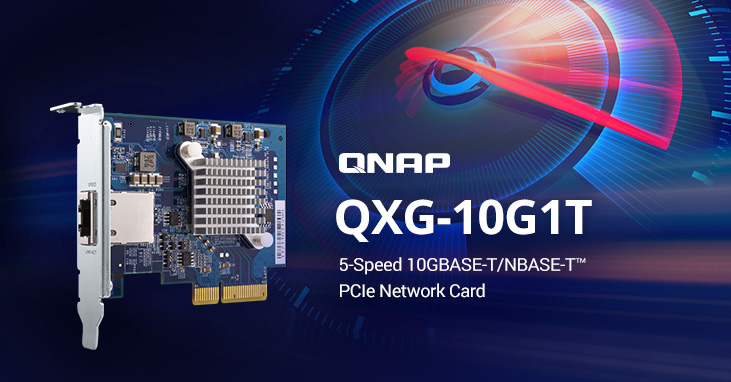 QNAP Systems, Inc., headquartered in Taipei, Taiwan, one of the leaders in Network attached Storage and video surveillance solutions in the world, today has shown off the QXG-10G1T a 5 speed PCIe 10GBASE-TNBASE-T NIC that will support 10GBASE-T/1000BASE-T/100BASE-TX and also 5GBASE-T/2.5GBASE-T (IEEE 802.3bz; NBASE-T) speeds, as well as the new REXP-1610U-RP and REXP-1210U-RP expansion enclosures that support 6 Gbps SATA hard drives and SSDs.

While aimed at enterprise and server market the QXG-10G1T is equipped with the Aquantia AQtion AQC107 NIC that supports 10/5/2.5/1Gbps as well as 100Mbps speeds. The RJ45 connector design also allows users to use their existing cables helping minimize issues when upgrading. By using Cat 5e cables, transmission speeds can reach up to 5Gbps, while using Cat 6a cables can deliver up to 10Gbps connectivity.

"QNAP has leveraged the industry-leading Aquantia NBASE-T solution to deliver the QXG-10G1T, providing users with a flexible solution for adopting high-speed network infrastructure on their QNAP NAS and PCs."

The QXG-10G1T uses a PCIe 3.0 x4 slot and can be used in Windows and Linux based PC's as well as a compatible QNAP NAS. The NIC is pre-installed with a low profile bracket but comes included with full and specialized brackets for specific QNAP NAS's. USers can download drivers for Windows and Linux from Aquantia the company responsible for the NIC. QTS 4.3.4.0486 (or later) is required for using the QXG-10G1T with a QNAP NAS. 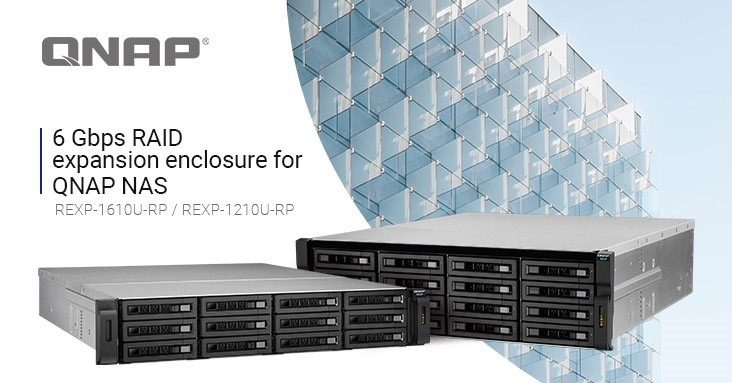 QNAP also launched the new REXP-1610U-RP and REXP-1210U-RP expansion enclosures that support SATA hard drives and SSDs. Intended for expanding the storage space of a QNAP NAS to fit the ever-growing needs of the consumer, the new expansion enclosures provide a flexible solution while still remaining budget-friendly for organizations to handle applications with serious data growth (such as archiving, high-resolution media storage, and video surveillance) without needing a large investment in the beginning.

While enabling plug and play use for simple and seamless capacity expansion, the new series makes growth at need quick and easy without much need for downtime. With the powerful Storage & Snapshots Manager, administrators can quickly configure the expansion operations and monitor the health of each expansion enclosure and the disks within them. QNAP NAS also supports missing mode protection to protect data on the expansion enclosures.

The new REXP-1610U-RP and REXP-1210U-RP expansion enclosures are now available.

The QXG-10G1T is now available for purchase from the QNAP Accessories Store: https://shop.qnap.com/index.php?route=product/product&product_id=250