Following the end of PGI 2018, a major update is soon going to hit PUBG PC test servers in the next 12 hours, introducing several new features and quality of life improvements.

The new PUBG PC Update #19 introduces, among other things, performance improvements and limb penetration, a highly requested feature, as well as gameplay tweaks and quality of life improvements.

Bullet penetration system is now applied to forearms.
When bullet hits the forearm of the character, it will penetrate following its ballistic curve. The result will be different depending on whether the forearm is blocking more vulnerable body parts.
When a bullet penetrates a forearm and strikes a more vulnerable body part behind it, the greater damage will be applied. In other words, if a player’s forearm takes a bullet while blocking their head, the full headshot damage will be applied. This penetration system works for the head, torso, and waist only.
If a bullet penetrates the forearm, but no vulnerable body part is behind it, only the forearm damage will be applied
Forearm penetration is disabled for shotguns
Bullet penetration is not applied to legs.
Hands do not block bullets, as they have no hitbox.
When exiting vehicles while pressing the sprint key, sprint now remains engaged. This way you won’t have to release and press the button again to start sprinting.
If a teammate disconnects, but is still alive in game, other teammates couldn't see the game reward (result) screen after all other teammates died. Now players can check even if there are disconnected players in their team.
If a disconnected teammate reconnects the game, and finishes the game with better result, teammates will receive any additional rewards earned by that player.
To prevent abuse, other teammates cannot see the Deathcam until all players, including the disconnected player, have died.

Colorblind settings have been improved.
The following colors now change according to the selected colorblind type.
Scope and reticle colors
Blood
Supply Crate Smoke
Markers placed on maps are now numbered, so color is not the only way to distinguish them.

You can now place map markers without opening the map.
Right-clicking while pressing the Alt key places a marker on the map at the aimed spot.
Key bindings for this may be customized in the Options menu.
Eliminated teammates can now place markers on the map.
Equipped weapons HUD now shows slot numbers for improved readability.
Kill feed now displays personal knock-outs.
Sharpening option has been added to graphics settings.
You may now enhance sharpness independently of post-processing options.
Added an option to set a maximum frame rate
Maximum lobby FPS: 30 / 60 / Unlimited
Maximum in-game FPS: Unlimited + Smooth Off / Unlimited + Smooth On / Display Based / Custom
“Smooth” is an Unreal Engine feature that’s explained in more detail in a response posted here.[answers.unrealengine.com]
Now you can move your mouse cursor to another monitor when the system menu, world map, or inventory is opened, if you use multi-monitors

Dynamic weather has been added to Erangel and Miramar.
Erangel: Overcast
Miramar: Overcast, Sunset
Overcast setting includes dynamic weather, and includes rain, fog, etc. during the game.
Erangel has received some improvements.
Small clusters of houses have been added to some areas of Erangel.

More tactical landscapes have been added near the river.

Added trees in the open area surrounding the Sosnovka Military Base.

Custom Match
Additional Custom Match presets have been added.
1 Normal Mode Setting: Early Access Setting
Lvl 3 Helmets and clothing spawns in world.
Item spawns are more scarce.
Blue Zone damage is weaker.
Jet skis do not spawn.
1 Esports Mode: Gamescom Invitational 2017 Setting
Same as the Early Access Setting, but without the Red Zone and 1.5x AR spawn.
When Overcast weather is selected when hosting a Custom Match, the following dynamic weather settings may be adjusted in the Advanced options.
WeatherChange StartTime Min
WeatherChange StartTime Max
WeatherChange Duration Min
WeatherChange Duration Max
No Change Weight
Change to Rain Weight
Change to Fog Weight
Custom Match sessions are now listed in order of the number of players joined, instead of time created.
When creating eSports mode, redzone option is fixed to ‘off’
When you create a custom match, you must fill in the game title to proceed further

Performance
Improved frame rate by optimizing weapons not currently held in hand.
Level streaming has been enhanced to increase performance.
Smoke and flames from vehicles have been optimized to improve frame rate.
Fixed an issue where frame rate hitches would occur when environment effects were created.
Server performance has been improved by adjusting the replication rate.
Previously, replication for all visible characters in sight was refreshed every frame. Now, replication rate differs according to distance from the player.
Network code has been adjusted to slightly increase server performance.
Lessened the discrepancy between the aim of the spectated player and the moving target being shot at.

Additionally, a new play mode called War Mode: Conquest is also available on test servers, so there's a good chance that it might be implemented in the near future to the full game. 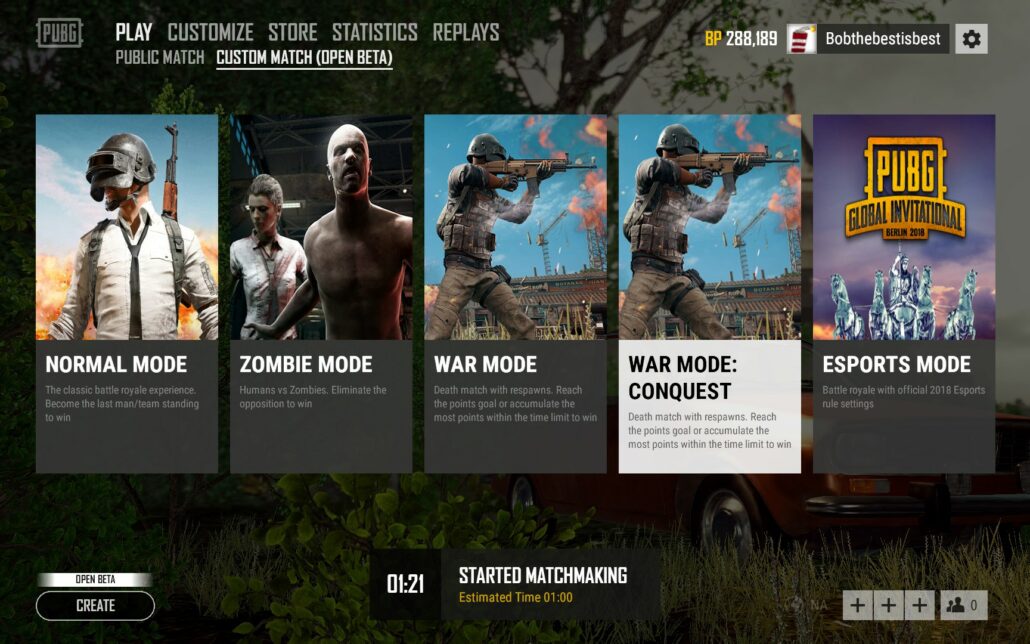