FBI Director: “There’s No Such Thing as Absolute Privacy in America” 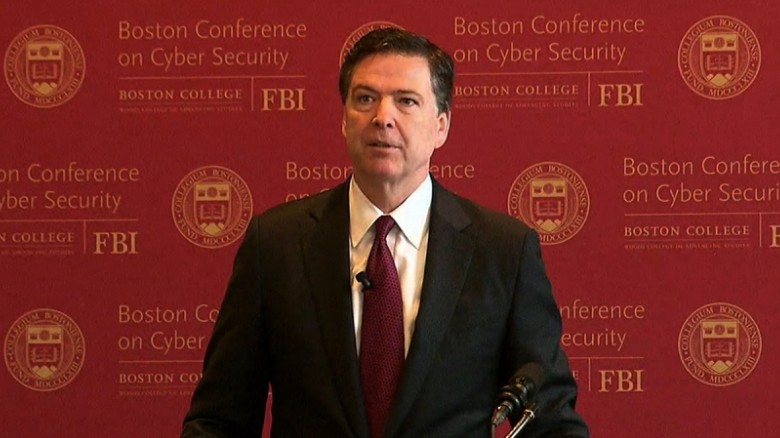 James Comey, the FBI Director, is currently embroiled in a controversy over his attempt to rebut President Donald Trump's claim that the Obama administration tapped the new president's phones during the 2016 presidential campaign. While President Trump refuses to acknowledge Comey's claim and still believes he was spied on, Comey has said he is not going to leave his position anytime soon.

"You're stuck with me for another 6 and a half years," Comey said.

Comey was appointed by then-President Obama over 3 years ago and doesn't seem to have a good relationship with the new president. However, during his speech at the first Boston College Conference on Cyber Security, the FBI director insisted that he plans to serve his entire 10-year term.

FBI director doesn't want you to follow his Insta, but definitely wants your data without warrants

Before starting his session, Comey interestingly made it very clear that he wouldn't take questions about issues that he didn’t want to talk about (read: CIA dump).

What's even more interesting than Comey's insisting on completing his term is the fact the FBI director publicly admitted that there is no such thing as absolute privacy in the country.

"Here's something that I don't mean to freak you out with, but I think it's true. Even our memories are not absolutely private in America. Any of us can be compelled to say what we remember, what we saw … In appropriate circumstances, a judge can compel anyone of us to testify in court about those very private communications.”

"There's no such thing as absolute privacy in America. There's no place in America outside of judicial reach," James Comey, FBI

Comey added that he himself is a fan of privacy, especially when it comes to his Instagram account. He said his account only has nine followers and is limited to members of his family.

"I don’t want anyone looking at my pictures."

While the FBI director wants to enjoy the privacy of Instagram, he doesn't want "commoners" to have the same feelings for their own private lives.

"We also believe user control of data is not a requirement for strong encryption," Comey claimed.

FBI director revealed that in the last four months of 2016, FBI "lawfully" gained access to over 2,800 devices in criminal, terrorism and counterintelligence investigations. The agency was unable to open 43% of those devices, which is why the FBI director doesn't want users to have control over encryption.

He said that while it's not the FBI's job to tell Americans how to live, it's not the job of tech companies, either.

In the wake of yesterday's CIA leaks, the FBI director tried to gain some brownie points with his Instragram anecdote but still couldn't resist hating encryption. "The advent of default, ubiquitous strong encryption is making more and more of the room in which the FBI investigates dark," he said.

Tech companies - specifically Apple - and the FBI have repeatedly battled over how the user information should be handled. "They're an awesome company, I love their stuff," Comey said referring to Apple. "They're not evil people. They may weigh things differently than I do. That's ok."

WikiLeaks released documents on Tuesday, claiming that the CIA has developed tools to break into devices to record conversations before they can even be encrypted. Comey didn’t comment on this disclosure or the US agencies' capabilities of preemptively breaking encryption.