One of the incentives for buying Pixel/Nexus devices is that you're guaranteed to be the first in the queue to get updates directly from Google. Today, several Pixel and Nexus devices are all set to receive the February security patch, that promises to fix several minor issues, including the much-awaited fix for Android Auto.

Last month’s security patch included fixes for Meltdown and Spectre just before the CPU vulnerabilities were revealed. However, the update also brought it with a plethora of issues, such as voice recordings not function properly in third-party apps, severe issues with swiping away notifications on the lock screen and Smart Lock settings disappearing. You can read more about it here. This month’s patches are now rolling out with the perfunctory bug fixes and security updates for Pixel and Nexus devices. 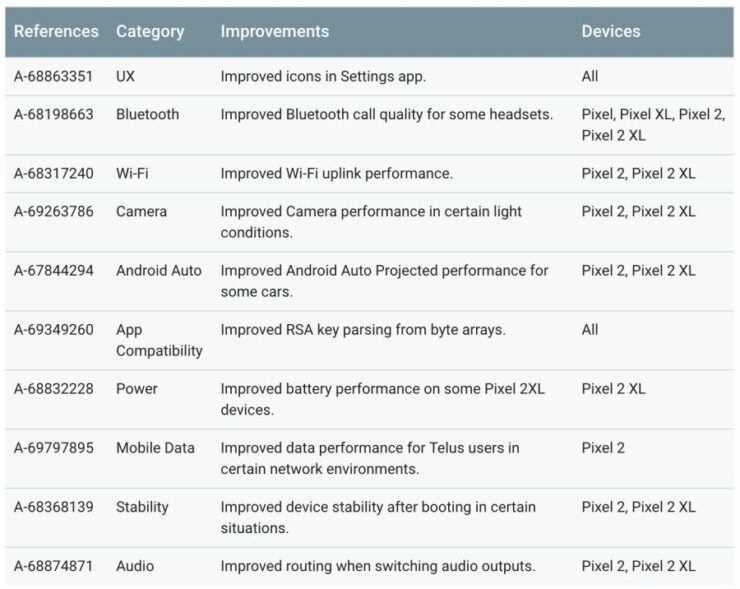 There are several issues resolved in the February security patch dated 2018-02-01 and 19 in the 2018-02-05 one, as noted on the Android bulletin. Vulnerabilities range from high to critical, with the most severe relating to the media framework and possibly permitting a remote attacker to execute arbitrary code through a “crafted file.” and potentially gaining elevated permissions.

The changelog for Google’s phones and tablets lists a total of 29 security fixes and ten functional updates. One of the major additions for the Pixel 2 is the activation of the Pixel Visual Core in third-party apps such as Instagram, Snapchat, and WhatsApp. Developers will be able to take advantage of HDR+, Zero Shutter Lag and other features found in the Google Camera app.

The full download and OTA links are below. You can either sideload them to your device or wait for an OTA update. Complete instructions on how to sideload a factory image can be found here.

We're hoping that this month's update doesn't break stuff as last months did. We'll keep you update if there are any kinks that we experience after the OTA hits our devices.