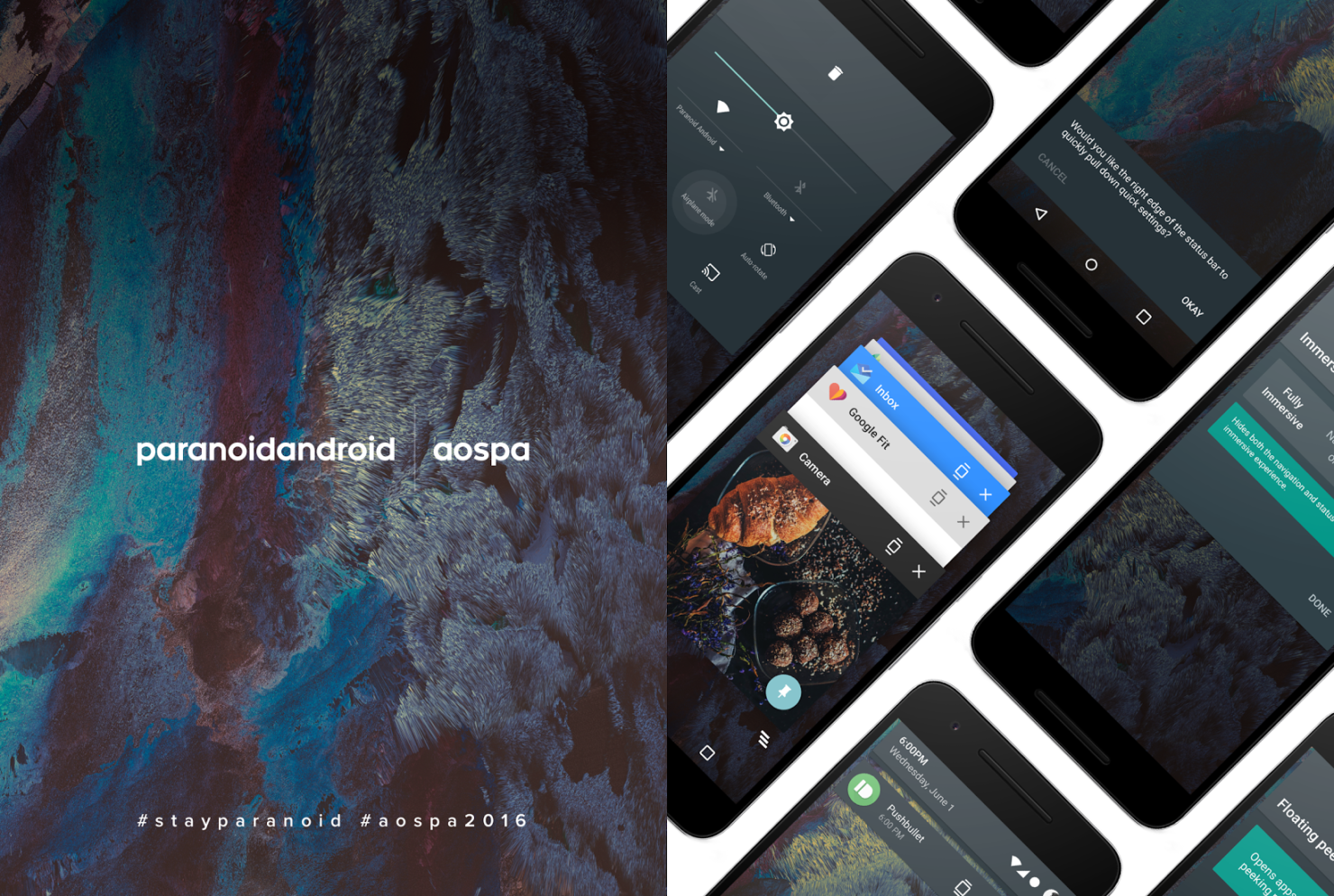 Paranoid Android is back in action, as the team has just released a stable version of its Paranoid Android 6.0 custom ROM. Full of exciting new features, along with many of the old favorites that are now available in a new and stable release of the custom firmware.

Back in 2015, the Paranoid Android team started to work for the Chinese company OnePlus, building its Oxygen OS that now powers OnePlus 2 and several other smartphones. It wasn't known if the makers of the popular custom firmware will start working again on their own custom ROM. Apparently, the team started working on a new release of their ROM over nine months ago. However, instead of releasing alpha and beta versions of their ROM, the team decided to work on the firmware until it was ready for a stable release.

Paranoid Android has now made a comeback surprising all of their fans and followers. "We are launching brand spanking fresh. All new features. New team members. New everything and we have made sure that everything that we are releasing has been polished to our best," the team posted a message on Google Plus (full message attached at the end of this post).

With an idea to bring more fun and new features, the team has released Android Marshmallow based builds, bringing back many of its signature features, along with some new additions. The team has focused on a new design and has improved the speed and performance of the firmware. According to early reviews, the ROM brings a fluidity that isn't common for a custom ROM, offering a more stock OS-like smooth and stable experience.

Some of the Paranoid Android 6.0 custom ROM features:

Paranoid Android has already released the builds for popular Nexus devices (Nexus 6P, 5X, 6, 5, 4, 7 2013, and Nexus 9) and the OnePlus family (One, 2, X) along with some unspecified Sony devices. You can download the AOSPA16 custom ROM right away. As always, we will be sharing the flashing guides with our readers later today, and in the coming few days.

We are launching brand spanking fresh. All new features. New team members. New everything and we have made sure that everything that we are releasing has been polished to our best.

The main features and enhancements that you will probably end up noticing are our custom Quick Settings tile reordering functionality, floating window support, immersive mode, the new on-the-spot interface and CM Theme Engine.

Quick Settings tiles can be managed with ease - you can reorder the tiles by simply long pressing them, remove them by dropping them in the trash bin and add them back in from the add panel. The hidden tiles will be out of your way when checking the notifications but will still be usable from the add panel without any hassles if you want to do that all of a sudden.

Those are not the only changes and features we have added. There are a variety of improvements to CAF devices (OnePlus, OPPO and others) which add custom kernels, advanced gesture and buttons control and more to provide a great experience on those devices. Of course we have spent a lot of attention on making all the visual details look right and on making all the functionality work right.

Over the months we have gained a bunch of new team members. We are now ready for all varieties of work - be it low level, aesthetics, user experience, motion design, testing or anything in-between. What we strive for is the best and we are stronger than ever to reach that.

On Paranoid Android 2016 launch we are supporting popular Nexus devices (6P, 5X, 6, 5, 4, 7 2013, 9) and the OnePlus family (One, 2, X) along with some Sony devices. The lineup is this way to make sure we release the best possible experience on all the devices we release for. No compromises, pure greatness.

We highly recommend everyone to use BANKS GApps package (hold off on OpenGapps for now, we have heard some complaints). Nexus 6P users need to make sure their vendor partitions are up-to-date (6.0.1). Our Nexus 5X builds come with a prebuilt vendor image so no worries for you folks!