OxygenOS 2.1.3 update OTA for the OnePlus X has been announced, and will start to roll out for users around the globe soon. Complete changelog of the update is also included here. 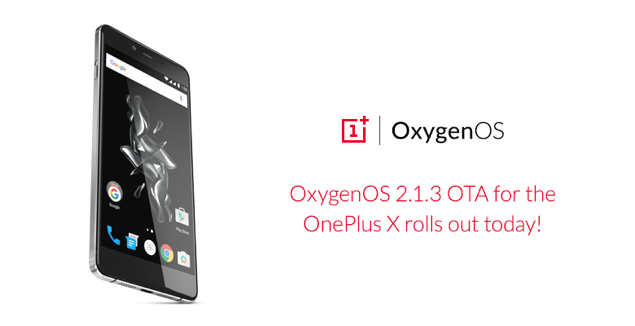 OxygenOS 2.1.3 For OnePlus X Will Start Rolling Out Soon

A few years back, it was nearly impossible to get a good smartphone for a price point of just $249. But over time, manufacturers have made strides in the right direction, ensuring that users get the best bang for their buck regardless of their budget, and OnePlus has been on the forefront of proceedings, delivering flagship smartphones at amazing prices. Once again, the company has outdone itself with the release of the OnePlus X, and today, the company is going one step further and has announced OxygenOS 2.1.3 update for owners, due for rollout extremely soon.

The complete changelog of the OxygenOS 2.1.3 update is as follows:

While we're all up for bug fixes and performance enhancements, but it's a slight disappointment that the update doesn't bring with it Android 6.0 Marshmallow, Google's latest and greatest operating system for smartphones and tablets.

OnePlus goes on record to state that the OxygenOS 2.1.3 update won't be rolled out to everyone at the same time and the company plans on doing it "incrementally." The reason for doing so is explained as follows by OnePlus itself:

We generally start our OTA rollout with a small percent (~10%, randomly chosen) of our users to ensure that the OTA system is working correctly. The reason we do this is so that in case we find any serious issues, we can contain the problem quickly and find a solution before it impacts a wider audience. This also allows us the address the affected users quickly without too much of a queue. We usually open up OTAs to the general public 24-48 hours after the initial release if all goes well. Thanks for your patience in the meantime, I know waiting can suck.

So basically, there are chances that the update might go bad during the rollout process after which things will be put on halt, fixed, then resumed again. Nothing to worry about though.

Keep an eye out on that notification bar for the OxygenOS 2.1.3 update as it can hit your device at any moment. If it does, then be sure to let us know about it in the comments section below.