Overwatch 2 May Launch in 2020, According to PlayStation Brazil

Overwatch 2 could be released sooner than we had thought. The official PlayStation Brazil Twitter account said the game would launch in 2020; the tweet has since been deleted, which could indicate one of two things: it was a mistake; it wasn't meant to be publicized yet.

Here's a screen capture of the tweet, by the way. 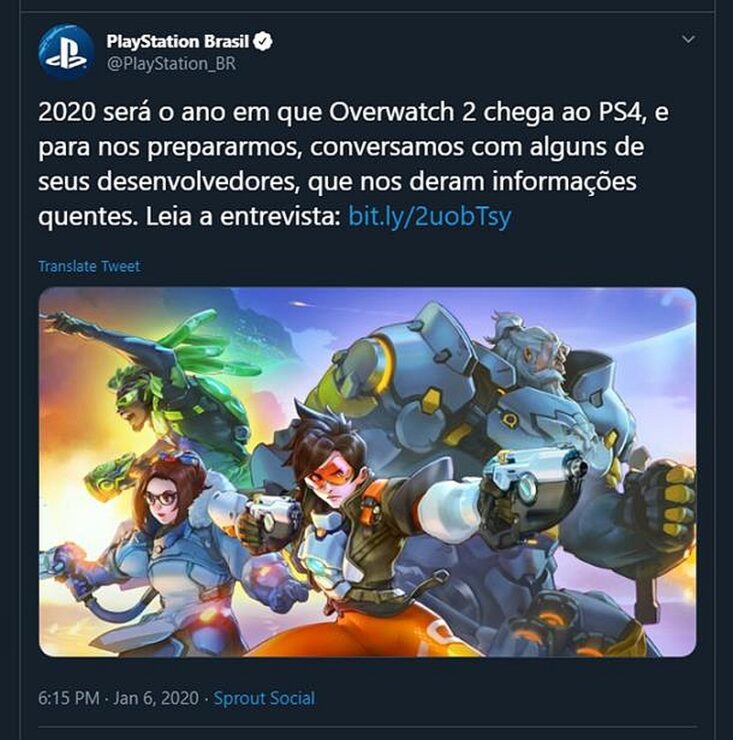 Truth to be told, when Blizzard announced the game at BlizzCon 2019 the developers said Overwatch 2 was 'at least a year out'. This pushed many to believe it'd come in 2021, but it could also mean a late November 2020 release date as a launch title on PlayStation 5 and Xbox Series X.

Blizzard is attempting to do a different kind of sequel with Overwatch 2. The main addition will be the highly anticipated PvE mode, while the PvP will be seamlessly integrated with the first Overwatch ensuring a single shared player pool.

In Push, a new, symmetrical map type that will launch with Overwatch 2, teams battle to take control of a robot that begins in a central location, then push it toward the enemy base. Either team may take control of the robot at any time. The team that pushes the robot furthest onto the enemy side wins the game.

A Bigger World: Take the battle to new, iconic international locations, from the colorful streets of Rio de Janeiro to the scenic splendor of Gothenburg.

Play an active role in the next chapter of the Overwatch saga through a series of intense four-player missions. Fight back against Null Sector, uncover the motives behind the omnic attacks, and confront a rising wave of new threats.

The battle continues with Hero Missions. As escalating crises break out around the world, encounter an ever-changing array of scenarios with a range of diverse and dangerous enemies. Level up your favorite heroes and earn powerful customization options to help beat the odds.

It’s up to you and your friends to stop Null Sector, the elite forces of Talon, and other enemies of Overwatch from carrying out their plans. Each enemy faction features a unique mix of units with their own strategies and strengths, challenging you to adapt your approach every time you play.

Overwatch 2 evolves the look and feel of the world, with more dynamic environments, larger scale battles, additional in-game storytelling events, and improved atmospheric effects and shadows. Heroes in Overwatch 2 will also have a brand-new look, with greater detail and higher fidelity.

BlizzCon 2020 Might Not Be Feasible Warns Blizzard, but Plans Are Still Being Made