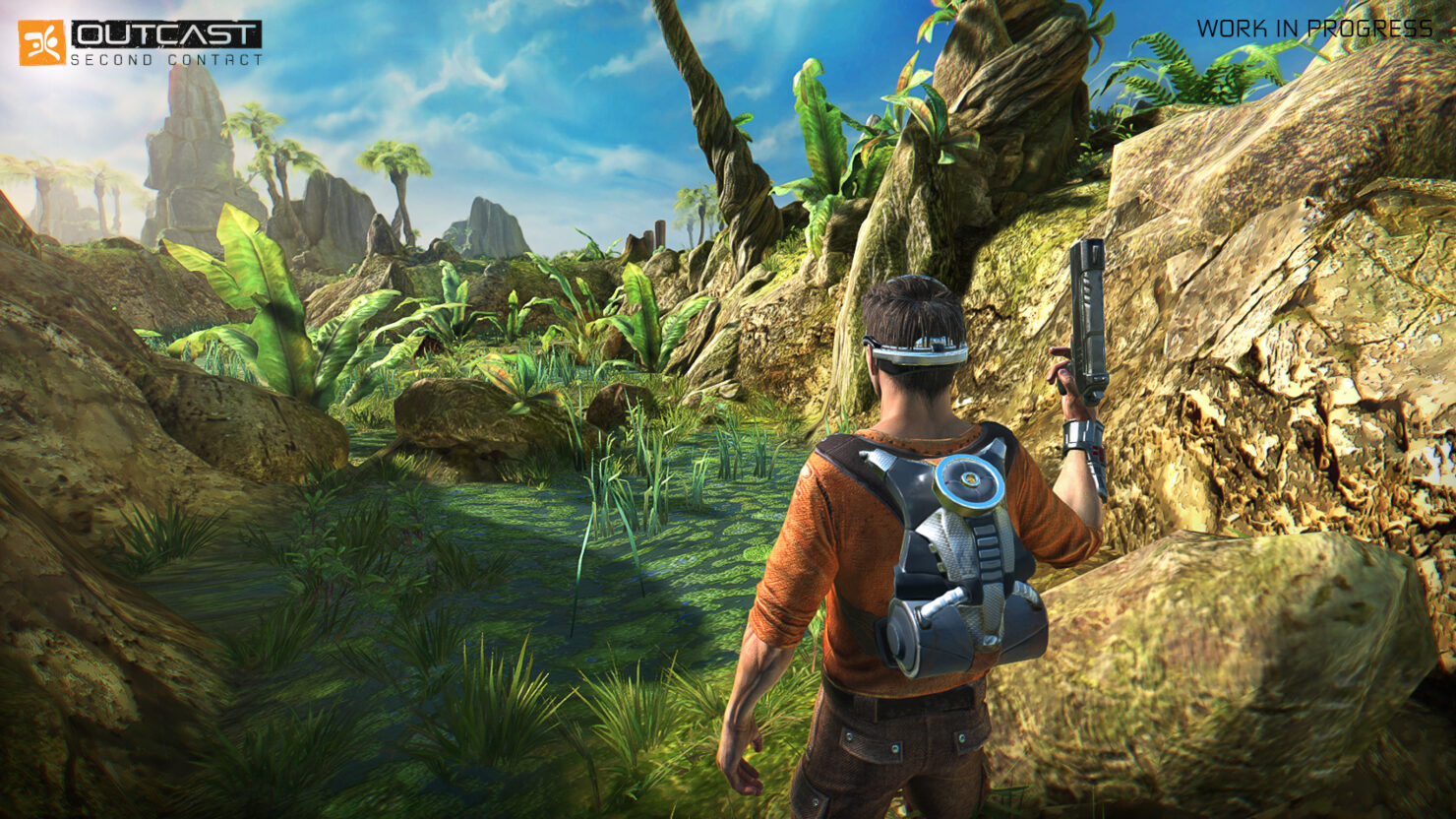 To learn more about it, we reached out to Appeal who kindly accepted to answer our questions.

Would you describe Outcast - Second Contact as a remaster or a remake and why?

Second Contact is a partial remake or a remaster ++ as we like to call it: we are pretty much
in-between. Let me explain you that.
Outcast – Second Contact is a truthful remaster of the original game in the sense that we are
using an improved version of the original source code, running in C++ within Unity, the new
game engine. Unity is communicating with the source code constantly and many key game
components such as the level design, the quest system (the story) and the baseline IA are still
handled by the original code.
But 18 years of technological improvements is no small feat to catch up with and to deliver
the same awe-inspiring experience to players, we focused most of our efforts in revamping all
the visuals and making the gameplay more dynamic to please modern gamers. All the
environments and models are completely remade by hand and we added a lot of details to
them. The physics and the UI are also recreated and improved within Unity. The lightning and
weather effects, something we work a lot on, are also new and help convey the original and
unique atmosphere of each region of Adelpha, the alien planet you’ll explore in the game.

You chose Unity 5 over Unreal Engine 4. Why is that and what was your experience
with the engine?

We at Appeal worked on our own game engine for many years. It was great, but it’s also a
heavy investment. The beauty of Unity or Unreal is that given enough time and effort, you
can achieve anything. There are some subtleties between the two, however, and we choose
Unity 5 because we needed a very customizable base to work on. Indeed, we knew from the
start that our biggest technical challenge would be to overcome the limitation of the base
game. The original Outcast took us 4 years to complete and used a lot of custom technology
that has no equivalent today. Unity was just the best tool for the job for its flexibility. We are
happy with it, for the most part.

From what I've read, you didn't include day and night cycles in Outcast - Second Contact.
Was that simply too much work?

Indeed, there are no day and night cycles. It’s mainly an artistic choice. We designed each
region of Adelpha to convey a particular feeling, a mood. We worked pretty much like
painters, picking colors, adding lights and weather effects. Some worlds have a dynamic
lighting to create the impression of clouds passing by… but each world is frozen in the
state we imagine it.

Back in the days, our QA tester spent 48 hours to complete the original game at 100%, and he
knew the game inside and out. An average playthrough would take about 30 hours, and the best speed runners took down the original game in less than one hour this year. I expect Outcast - Second Contact to be about the same duration, 30 hours in average.

Combat has been revamped with "dodges, rolls, sprint and cover system". Does that mean you overhauled the AI to deal with these new moves available for the player character, too?

Yes, bullets fire faster and the original AI has been improved. Enemies are more mobile and
ruthless. Their tactics are now more visible as they will be more daring when they try to surround
you or pull you out from your hiding place. But it’s still a strafing based gameplay where you
dance between enemies, play with the environments and stay mobile to dodge their bullets.

Can you talk about the new "hidden areas" that will supposedly reveal some of the
mysteries of the original game?

Some questions have been haunting the fans for years: where are the female Talans? What
happened to the rest of the crew members? What happened to Cutter after he left Adelpha? We
left a lot of narrative doors open when making Outcast original game and those two hidden rooms
are giving some hints while raising a lot of other questions. It’s really an Easter Egg for the
community.

Should Outcast - Second Contact be successful, would you focus on releasing new content through
DLC or perhaps just working on a sequel? Do you already have ideas as to where
the story could go?

Our goal from the beginning, 20 years ago, is to create a saga within Outcast world. We always
had the ambition to tell epic scope stories and innovate in game design and world building to
create great games. Our focus, for now, is to make the best Outcast remake possible. This installment is a critical milestone both for the players and for us. It’s the first installment of the saga we have in mind, and it’s the first time many adventurers will meet Cutter and travel to Adelpha. We are also learning as we go along from tons of feedback and many discussions we had with the community. We have many ideas for the future and we hope that a successful Outcast - Second Contact will pave the way for future projects. And yes, there are scripts and storylines for what comes next written somewhere.

Given the minimum system requirements on PC, it seems like the game could potentially run on the Nintendo Switch. Is that a possibility for the future?

The Switch nomad particularity is well adapted for solo adventure game with rich open-worlds
where you can hop-on and hop-off, where you always have something to do and with play sessions of any given time available. There have been discussions, but nothing has been confirmed.

Outcast – Second Contact Remake To Be Released in Early 2017