Every game is the first something. Wolfenstein 3D is known as the 3D shooter, Pong is known as the first video game, and Undertale is the first game to make me shoot chocolate milk through my nose. Outcast: Second Contact, a remake of the original, is hailed as the first 3D open world. Whether or not that is true is debatable, but it's frankly impossible to play Outcast and not see the inspiration it had for the action-adventure genre.

I have to admit it is a game I missed when it first released in 1999. Despite the praise that it received at the time, I somehow never heard about it about the rolled around in 2017. Luckily it carries all the hallmarks you’d expect for the age it was conceived. If you’re looking for a throwback to an era not often remembered, Outcast: Second Contact is probably your best bet.

You’ve got countless games inspired by, or direct remakes of 80s classics, or 90s kids games, but this is the first to really recapture the essence of this era of action and world building. You’ll see almost immediately, once the initial cutscene ends, how colorful and oversaturated the visuals are. If the original developers were photorealism, they were well off the mark. Games back in the 90s followed a more cartoonish design and Outcast is no exception. After completing a not-so-subtle tutorial the world opens up and you are frequently reminded that you can go where ever you want. It is nice to wander and soak in the almost painfully bright alien environment. 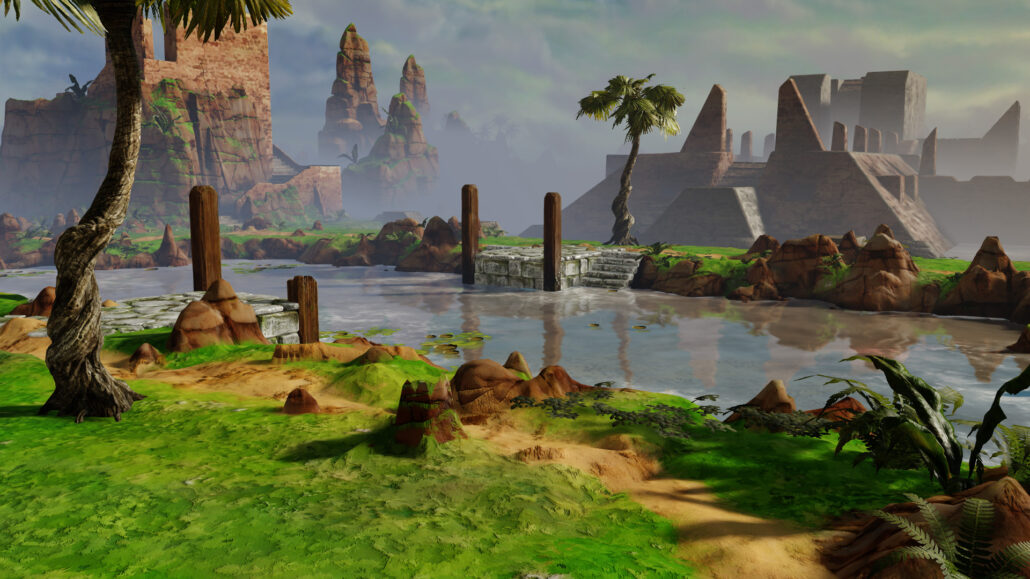 There is some lovely detail to take in as well, the otherworldly rice paddies, trees and structures that appear just strange enough to grab your attention. And just like every other adventure game of the era, the world feels just a little bit empty. NPCs are a bit sparse, with the towns and cities nothing more than a handful of houses.

What this game reminded me of was Fable. With a handful of different locations with their own unique style, the aforementioned colorful aesthetic, but with no long stretches of empty space, the game feels more ambitious than the technology of the time. It's something that you’ll feel from the very beginning all the way through your time with Outcast. Even with the polish, everything about the way Outcast presents itself is filled with dated ambition, and it feels so delightfully fun for that. It's unapologetically 90s to have such experimentation on display. I don’t want to say it feels fresh against the more refined, measured determination and polish of games today, but it certainly feels different enough as to be exciting.

And speaking of excitement, most of your time in Outcast, if you forget about the unremarkable stealth mechanics, are spent shooting at a variety of alien oddities and enemies. With the controls less precise then you might expect, fights often descend in either a bouncing mess or a Mexican stand-off. Players who missed the wave of shooters that deliberately made it difficult to move and shoot will probably be frothing at the mouth. It's annoying. I can’t defend it, but I can say that it possibly worth the sacrifice to glimpse through history.

The rest of the game is spent exploring and talking, with a splash of platforming because this was a game from the 90s. Dialogue trees are webs of information for the player that wants to learn more about the story and the world they find themselves in. Unlike games inspired by this one including Mass Effect you won’t need options to influence the game socially, and the voice acting and face models are more than a little uncanny valley. The script itself is not very subtle, and you won’t find many nuanced moments engaging with the characters.

The story itself is so 90s it almost feels like a satirical take. After a group of scientists creates a portal to another world that naturally goes awry, you’re called in to fix the problem and save both worlds. The central character's roguish and gruff demeanor is very much on his sleeve, and each other character only has one defining characteristic. Like the scientists who definitely isn’t evil. Like the graphics, Outcast: Second Contact's story is almost cartoonish in nature, with easily telegraphed twists and plot points. Nonetheless, it's an enjoyable adventure that doesn’t require much thought. With a delightfully nostalgic world for some to get lost in, almost hilariously infuriating combat mechanics and a cartoonish, sci-fi fuelled story, there is a lot going on in Outcast: Second Contact. It might not be as defining and memorable as it once was in 1999, but it is an oft-forgotten piece of history in games that will at the very least give you a better understanding of how the genre formed.

Reviewed on Xbox One (code provided by the publisher). You can purchase the game on Amazon.

While it might once have been the Game of the Year, age and experience have robbed Outcast of its original magic. Luckily, most of that has been replaced by an exciting return to the old and an interesting look back at what the landscape of games used to be.

Outcast – Second Contact Remake To Be Released in Early 2017