As was hinted by the Photos app review, Apple has just publicly launched its new OS X 10.10.3. The OS X update was in beta stages since a long time reaching out to the start of March. The new upgrade to the OS X series has made many changes which sets itself apart from the previous version and can be said to have an improvement, both performance wise and visually. 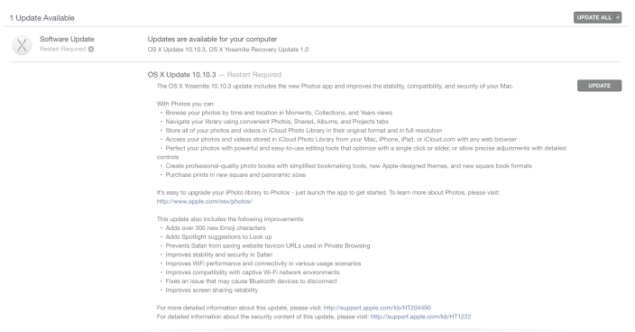 The updated OS X 10.10.3 has many new features which includes the Photos app which was in the talks previously and introduced way back with Yosemite in the previous year. The second addition includes enumerable emojis, more than 300 new additions to be precise. Alongside these additions, OS X 10.10.3 brings a completely redesigned SpotLight Look Up panel with changed icon design. Apart from this, many internal changes have also been made that includes, networking and other wireless improvements. Lets head down to some more details on the subject matter.

Today, Apple has completely over taken the previous Photos app which states that it would not be around anymore unless you change your mind to not to update to the recent OS X 10.10.3 version. New management styles have been adopted by Apple and the previous version is all packed up to leave. Its not only the Photos app that is made redundant but iPhotos and Aperture applications as well. The discontinuation of the previous versions has made room for the new one to take its place.

If you ask us the need to discontinue the previous versions of the aforementioned applications, its quite simple. The new revamped versions of Photos, iPhotos and Aperture app enables users to sync all of their images with their iCoud accounts and share them with all the devices that a single owner or a family owns. Accessing the same material through different devices have been made legit and easy.

If you like the changes made to the OS X, then all you need to do is head over to your Update Tab on the Mac App Store and download. iOS 8.3 is still in its beta stages but when t launches, these emojis will also be a part of it. Thats all for the update everyone, do comment your thoughts below.