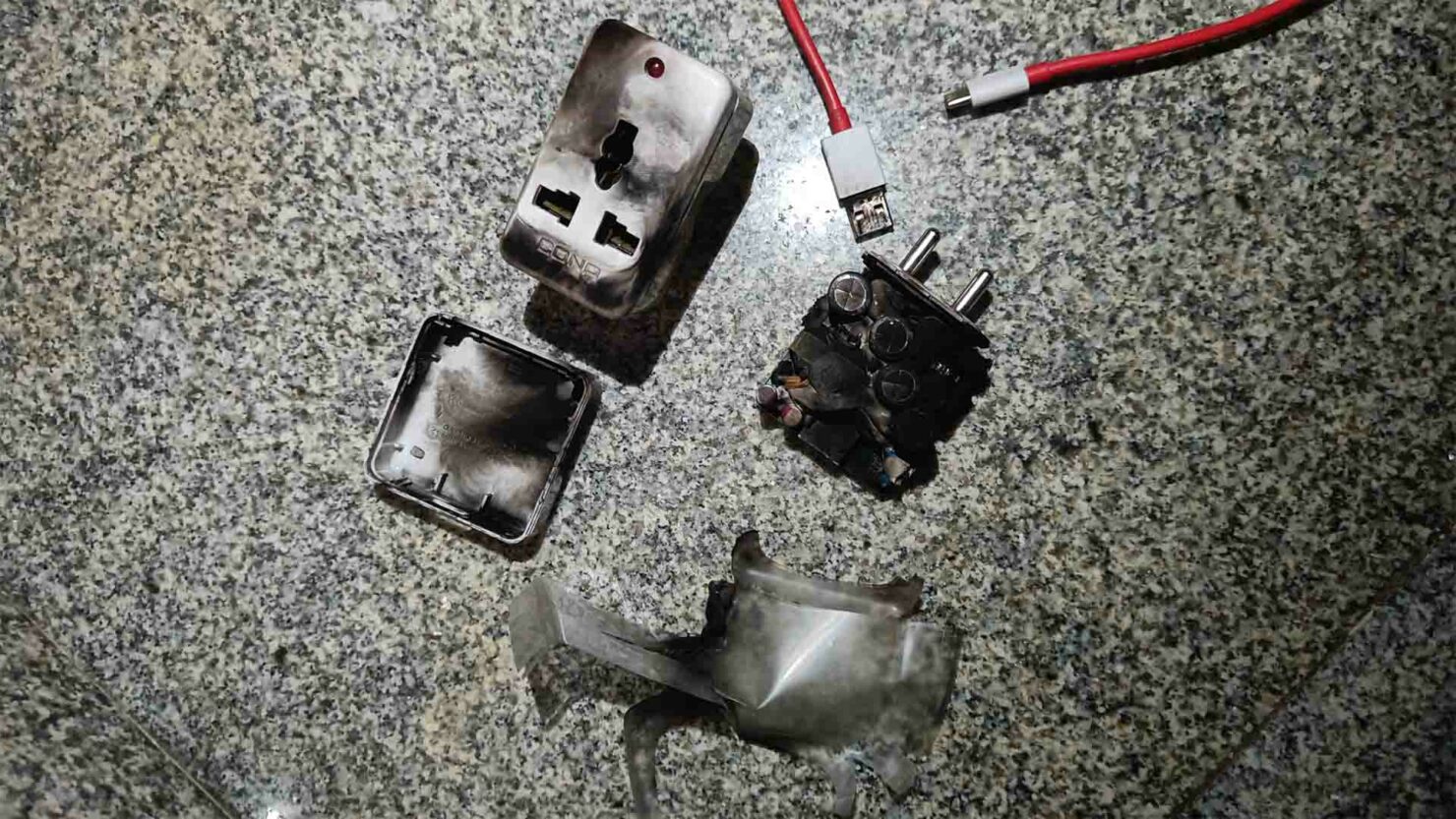 Another OnePlus Nord 2 user experienced a harrowing experience, but this time, instead of the phone going up in flames, the Warp charger of the smartphone allegedly exploded when plugged in the power socket. Unfortunately, the company has seemingly refused to take responsibility for the fact that the charging accessory may have been defective, instead concluding that the explosion was due to voltage fluctuations.

In OnePlus’ Defense, There Was a Rainstorm Happening When Then Warp Charger Was Plugged In

Twitter user Jimmy Rose put up pictures on the micro-blogging social network as evidence that the Warp charger exploded when it was plugged in the socket. Fortunately, the owner came out unscathed and so did his OnePlus Nord 2, but he should have been more careful as the weather was quite unfavorable when the explosion took place. For those wondering, there was a rainstorm happening in Kerala when the charging accessory was plugged in, so that may have been the culprit of this incident.

OnePlus later acknowledged the issue and informed the customer to visit the company’s after-sales center. Upon reaching there and after a thorough examination, OnePlus’ service technician informed the Nord 2 owner that the Warp charger exploded due to voltage fluctuations. While we will not ignore the previous Nord 2 explosions that occurred a few weeks prior, using electronics during a rainstorm is a recipe for disaster as the weather disrupts the stable electricity supply.

I wanted to get this to your immediate attention. My OnePlus Nord 2 warp charger blasted with a huge sound and it blew up the socket. Luckily I'm alive to make this tweet. The Nord 2 is working. but this is scary af. I'm still in shock😐@OnePlus_IN @oneplus @OnePlus_Support pic.twitter.com/K3fXCyGzNp

OnePlus had offered a replacement for the Warp charger to the owner and also informed its audience to stick to the safety instructions and warnings printed in the user manual. To protect your appliances, you should refrain from plugging in your electronics during a rainstorm, or invest in a surge protector and automatic voltage regulator. Both of these accessories protect your electronics from surges and the deleterious effects of voltage fluctuations.

OnePlus has also provided the following statement on the incident.

“We take any claim like this very seriously. The user has handed over the damaged OnePlus Charger to our service centre and has been offered a replacement. OnePlus chargers contain built-in capacitors which control and store energy. In this case, after a thorough analysis, the capacitors have remained intact concluding that the blast has been caused by external factors such as voltage fluctuations.”

Do you think OnePlus should take the blame for a potentially defective smartphone charger, or was it due to voltage fluctuations caused by the rainstorm?