At GDC 2014, NVIDIA talked about the new DirectX 12 API and the current state of DirectX 11 in gaming. During the event, NVIDIA presented several benchmark slides which show how the company has improved efficiency of their graphics cards in several DirectX 11 titles and still aiming to deliver more improvements through driver updates. While showing the driver to driver improvement, these benchmarks also show something very very interesting. They show AMD's Mantle API faring worse than NVIDIA counterparts, on DX11. That's right, not DX12 but DX11 through driver updates.

Before we begin, the obligatory preliminaries. There are three drivers mentioned in this article. The first one is the R331 Driver, the second is the R334 Driver and the last is an upcoming Driver. We see a clear speed increase going from the R331 drivers to the R334 Drivers but it is with the new upcoming Driver that performance of the Nvidia cards overtake those of their counterparts with Mantle API. Now according to the slides the Test Rig was running Windows 7 on an i7-3930K and 8GB worth of RAM. The first relevant slide shows two applications being tested. One is the Star Swarm demo, which you may remember showed a massive increase in performance with Mantle as compared to Direct3D. The Second is the recently released Thief, which once again showed a significant performance increase with Mantle API.

The performance gap is pretty significant seeing that this is just a Soft update of the same card. Now the Thief benchmark have a skewed axis starting from 48 fps till 60 fps, so the performance increase is lower (percent wise) than star swarm. However we can see that the GTX 780 Ti overtakes the Mantle Equipped R9 290X once again in terms of performance, with this mysterious new update. This second slide shows some impressive improvements of API features that once again come in this new upcoming driver update. 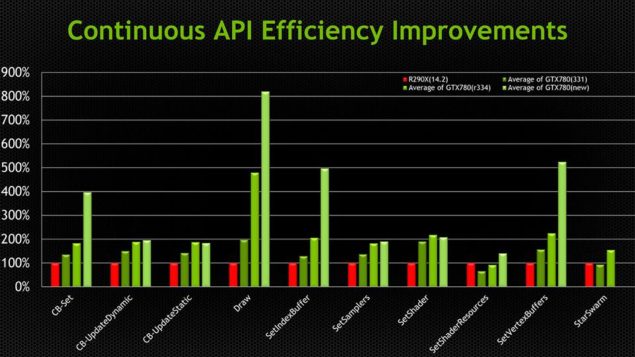 This is undeniably one of the most impressive charts i have ever seen. The Benchmark pits Mantle Equipped R9 290X against all three drivers. The new driver is very impressive, increasing performance by orders all around. We see an increase of an order of magnitude in DirectDraw.

If these benchmarks are true, and it looks like they are, it reveals why Nvidia didn't bother creating a rival API to Mantle but instead increased optimized their graphics card for the DirectX 11 API in a way that performance can be obtained from a simple driver update. Now the golden question that comes to my mind is this: If Nvidia could do all this with a Soft update, why didn't it do it before. The obvious answer to that question is slightly alarming.

In another slide, NVIDIA has shown the performance scaling between GPUs and CPUs showcasing that the Single precision performance in GeForce GPUs has increased tremendously over the past four years with GeForce GTX 780 Ti pumping almost 5.5 TFLOPs of performance compared to Ivy Bridge which barely cross the 500 GLOPs barrier. The AMD Kaveri APU manages to do 856 GFlops but its still a mighty length behind the graphics units. Similar, the total bandwidth on GeForce GPUs has increased to 336 GB/s as opposed to 60 GB/s on Ivy Bridge. Broadwell is supposed to feature Crystalwell eDRAM which will increase bandwidth to around 100 GB/s but nothing compared to GPUs.