NVIDIA announced their 20nm Tegra X1 mobility chip last month which is a mobile powerhouse featuring impressive specs underneath its hood. Successor to the Tegra K1, the Tegra X1 is also going to be featured within a range of high-performance mobility devices such as the new version of the Shield Tablet which is rumored to be announced during GTC 2015 as reported by Fudzilla. 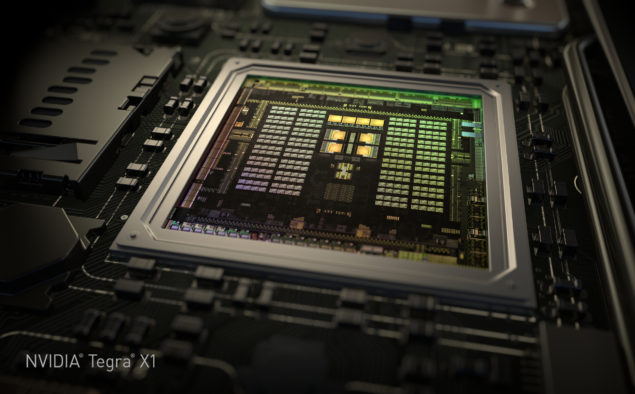 This year's GTC 2015 will be quite interesting since NVIDIA has a few products and chips to show off at the event. The company is likely going to show their high-performance Maxwell GM200 core architecture and possibly a range of professional cards utilizing that architecture. There's also going to be a possible GM204 related update as a dual-chip card and an update to the Tegra side of things with the Shield Tablet. While at GTC, NVIDIA usually discusses their next generation GPU roadmaps and architecture, last year, they showed the GeForce GTX Titan Z which was aimed towards both the consumer and professional markets. Tegra for NVIDIA might be a small business compared to the GPU accelerators, but the chips have got attention of several car manufacturer's such as Audi who are also likely to make an appearance at the event.

NVIDIA's Shield tablet based on the Tegra K1 chip made its debut back in July 2014 and came in vanilla (Wi-Fi) and LTE variants at a price of $299 US and $399 US respectively. The Tegra K1 was also featured inside Xiamoi's MiPad which retailed at $199 US adopting just about the same specs. NVIDIA did offer a wireless controller and shield cover to spice up the deals at MSRPs of $59 and $39 US for each accessory along with a range of NVIDIA exclusive technologies such as GameStream, ShadowPlay, Grid Cloud Gaming, Console Mode, etc.

This year, the latest Shield Tablet featuring the Tegra X1 chip is expected to make debut featuring the 20nm processor. The chip we have known since CES 2015 boasts a combination of four Cortex A-57 and four Cortex A-53 64/32-bit cores with the dual stacks integrated inside the die that deliver 1.0 TFlops of compute in 16-bit workloads (FP16) and around 500 GFlops for 32-bit workloads (FP32). The Tegra X1 has a 2 MB L2 cache and the A57 stack is coupled with 48KB L1 instruction cache and 32 KB L1 data cache. The A53 core stack being more power efficient feature 512 KB L2 cache. On the memory front, the SOC can use LPDDR3 or LPDDR4 with capacities of up to 4 GB. NVIDIA revealed that the chip is able to achieve the 1 TFLOP throughput at just 4W.

Over at the GPU side, the 2 SMMs of Maxwell GPU result in a total of 256 CUDA Cores with 16 ROPs and 16 Texture units. The Maxwell GPU has also been manufacutred on the 20nm process which will deliver improved energy efficency compared to desktop variants. Memory clock is maintained at 1.6 GHz pumping out 25.6 GB/s bandwidth and has a 256 KB L2 cache. The GPU comes with VXGI, Memory Compression and all the performance features introduced on GeForce 900 series cards a few months ago.

Compared to the 192 CUDA Cores on Kepler based Tegra K1, it should be noted that Maxwell cores feature 40% better performance and 2 times the efficiency hence delivering increased speed in gaming and other GPGPU applications which will be suited for devices based on the Tegra X1 chip. The Maxwell architecture at a high level is similar to its predecessor, the Kepler GPU architecture in the sense that it is based on fundamental compute cores called CUDA cores, Streaming Multiprocessors (SMs), Polymorph Engines, Warp Schedulers, Texture Caches, and other hardware elements. But each hardware block on Maxwell has been optimized and upgraded with an intensive focus on power efficiency.

It's likely that the specifications will remain unchanged as far as clock speeds are concerned and we will get the same range of features and accessories for the new Shield Tablet. The Tegra X1 chip supports H.265 Encoding, 4K Video encode. The display functionality is carried up to 4K x 2K @ 60Hz and 1080P @ 120Hz through HDMI 2.0.  NVIDIA is known to reuse their old designs for devices they love hence we can expect the size of the tablet to be around 8-9" boasting a high definition IPS display with several input methods utilizing DirectStylus and holster. The last design did represent a large HTC One M8 and since HTC is soon going to reveal their upcoming HTC One M9, the design might take some additions from that. The price of the new tablet is likely going to be the same and will feature the vanilla android experience with faster update availability. Performance estimates have already shown Tegra X1 blowing past the A8X SOC from Apple as seen here. 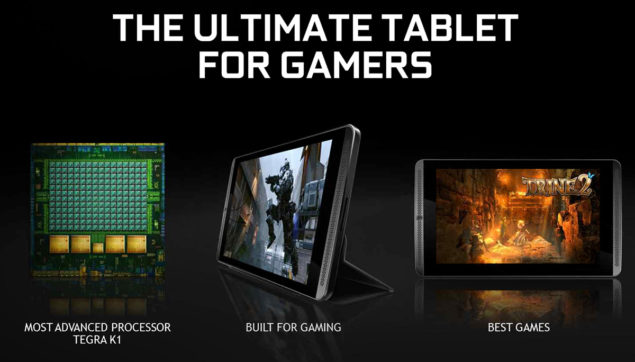