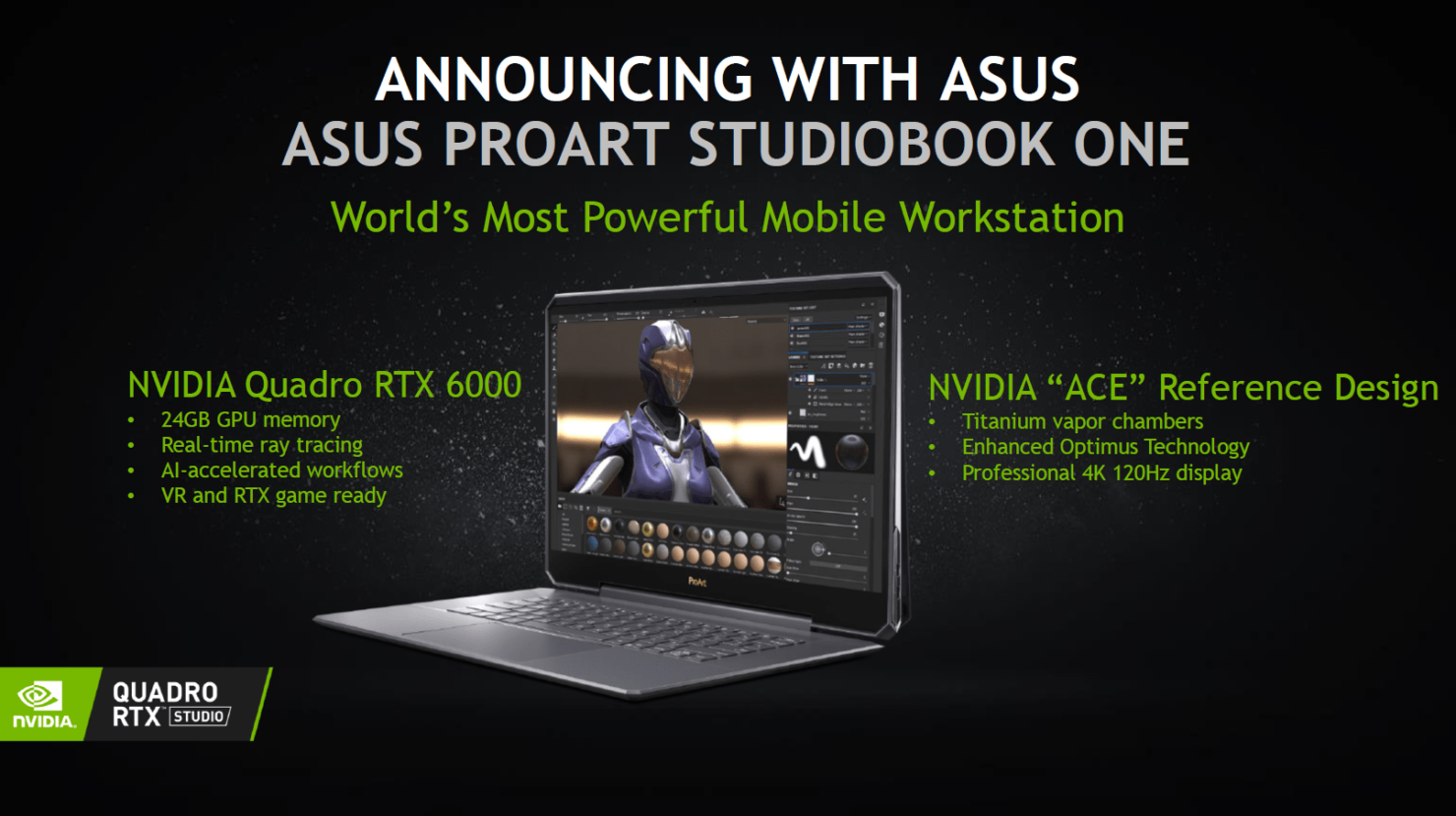 looks like NVIDIA and ASUS had something to show off at IFA2019 with the new ASUS ProArt mobile workstation. Mobile workstations usually remind me of Eurocom's luggables but this actually seems to be in a portable form factor - which is quite an impressive feat. While I am sure the battery life won't be that great, the amount of power NVIDIA has managed to pack into the ASUS ProArt (and cool it) is bound to make life easier for professionals on the go.

ASUS ProArt: Powered by an NVIDIA RTX 6000 mobility "ACE" reference design with 24GB of VRAM and close to desktop performance

NVIDIA has been focusing a lot on the "Z" aesthetic of notebooks - basically the width - and looks like its starting to bear some serious fruit.  The aim to pack in desktop levels of performance without melting your device is admirable and could be very useful for professionals that need this kind of horsepower on the go (or in the office). Many corporations are shifting to a laptop-based workflow where the laptops are plugged into the desks in the workplace and then taken home or on a business trip - and this looks like godsend for professionals in this space. 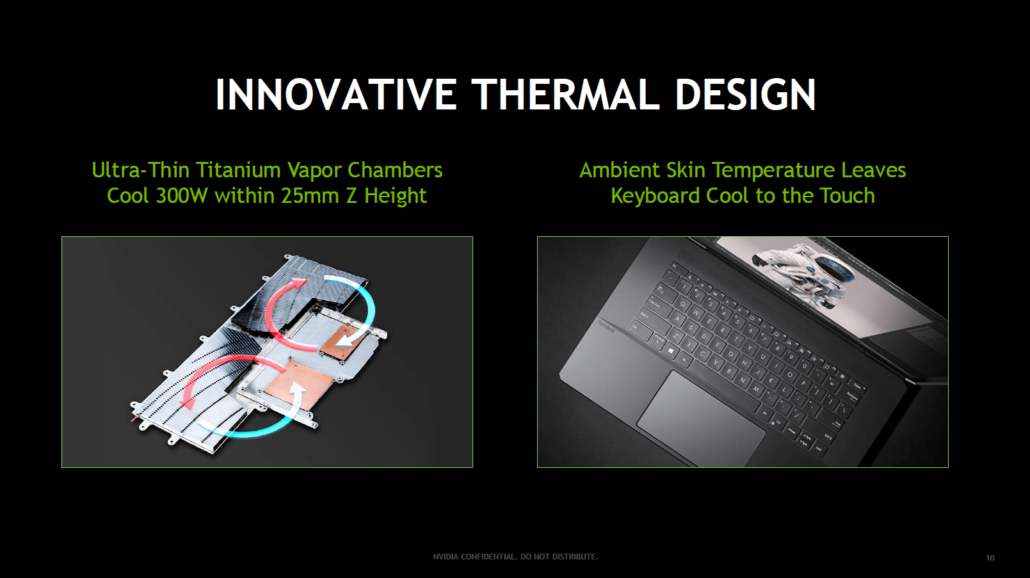 While this is going to cost an arm and a leg, the philosophy and tech behind this is really cool. Ultra-thin fins made from Titanium are used in a vapor chamber design that can dissipate 300W of heat in a Z height of less than 25mm. Even more impressively, ASUS and NVIDIA claim that the laptop will remain cool to the touch even when running the GPU full throttle - which is quite an impressive feat.

So they must have downclocked the core to fit it in the thermal envelope right? Well, this is where it gets even crazy, NVIDIA is claiming close to Desktop performance, which means that there must not be a lot of downclocking going on. These are probably highly binned chips that can run cool at high clocks and the entire setup is going to add to the cost. Here are some of the benchmarks the company shared at IFA: 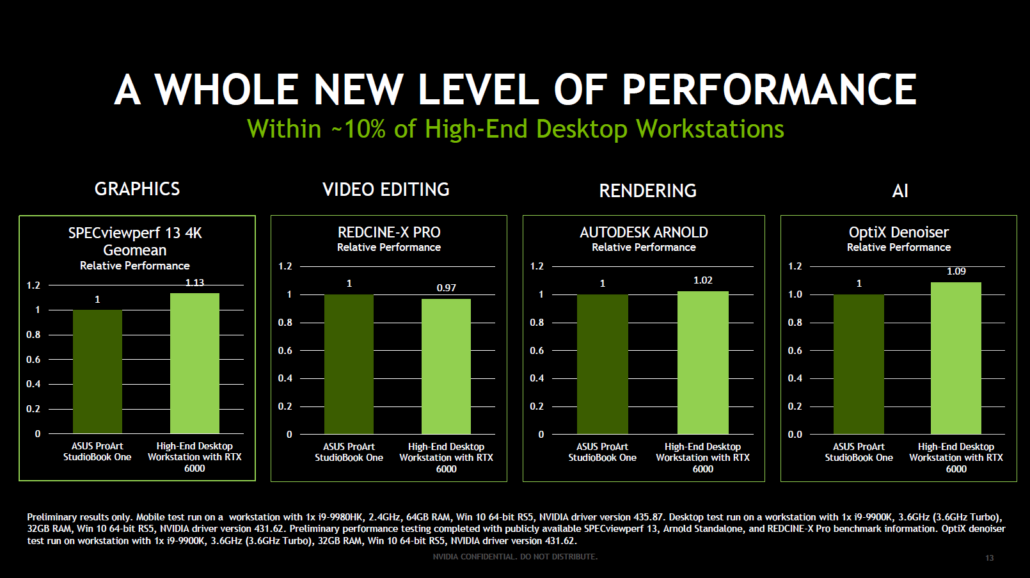 The ASUS ProArt equipped with the monstrous Quadro RTX 6000 is 13% slower than the desktop-based RTX 6000 in SPECviewperf 13 4K Geomean. It is actually *faster* in Redcine-X Pro by around 3% compared to the RTX 6000 desktop.  It's 2% slower than the desktop RTX 6000 in Autodesk Arnold (wow!) and 9% slower in AI OptiX denoiser. These are very impressive metrics and show that mobility graphics are now actively competing with their desktop counterparts.

While the RTX Quadro 6000 is unlikely to be of interest to the majority of our reader base, the good news is that this philosophy can be trickled down to GeForce based notebooks as well and I am sure NVIDIA is actively working on it. They already started the Z integrations with Turing and it looks like they are looking to perfect it within a generation or two. Faster, cooler and slimmer gaming notebooks is something everyone would be happy with (even AMD fans as they will be forced to offer something similar) so there's the incentive for gamers to be excited about this launch.