Reddit user JDSP_ has created to-scale 3D renders of the actual leaked images of the NVIDIA RTX 3080. These renders show off the design in every angle (kudos to JDSP_) and, to my eye at least, seem very accurate when compared to the leaked images. These 3D visualizations will give readers a much better look at the overall aesthetic of the card instead of just one pov and angle that we saw previously. User tor6770 also pitched in with his variants so we have a very good collection of 3D renders of the NVIDIA RTX 3080 GPU here.

These collections of renders (click on the image to see it in full resolution) by user tor6770 showcase the card in excellent lighting and visibility. We can see the top and bottom of the card. Unlike the leaked pictures, we can clearly see the difference between the all-metal face and the plastic-covered face (that houses the PCB. The heating is absolutely massive and pretty much covers the entire body of the card (we had already learned that the PCB is pretty short and the heatsink actually protrudes outwards like AIB variants). 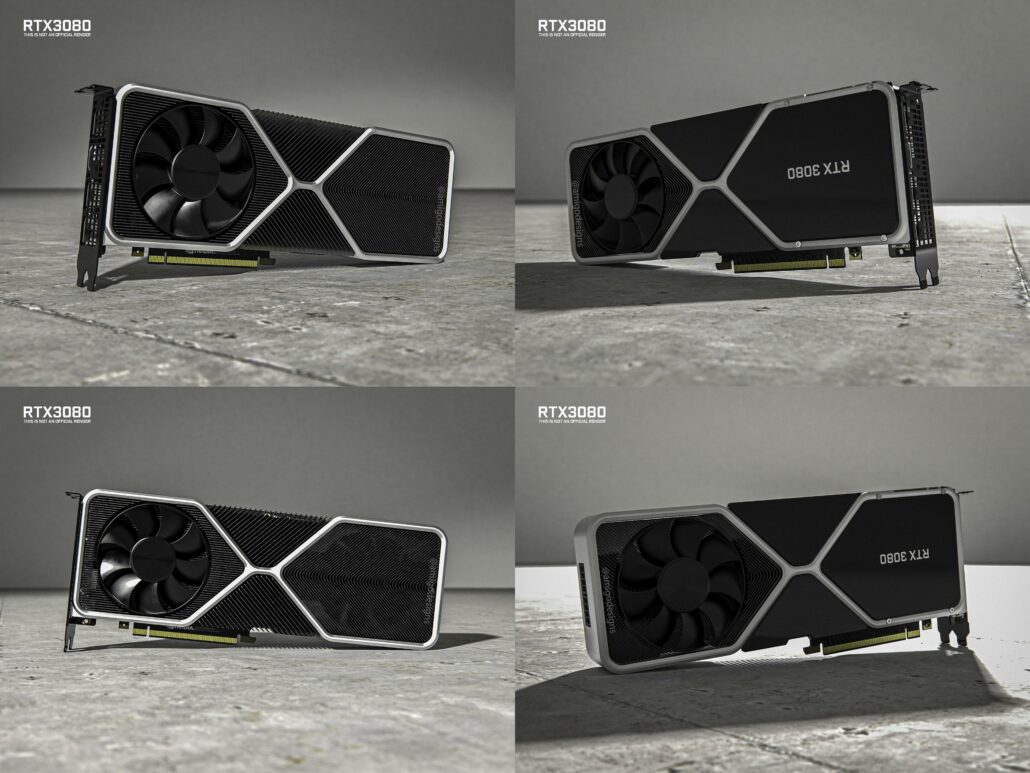 The thing I want to know is whether this is a vapor chamber heatsink (a massive one) or just a plain heatsink. The latter would seem unlikely given the lack of heat pipes unless NVIDIA has found a way to sneakily hide them somewhere (or innovated away their need). He also correctly figured out that the power connectors must be placed on the front face of the card as they are not present on the three sides visible in the leaked pictures. The RTX 3080 will likely have two 8-pin connectors and is shaping up to be an absolute monster.

Oh and by the way, the crossbars in the middle are clearly aluminum-based. I originally mentioned that we aren't sure if they are plastic or metal but we are now. There is a detail in the original leaked images (which these renders don't show) that confirms that. The RTX 3080 crossbar has a tiny engraved NVIDIA logo - something not possible with plastic. Considering this is a founder's edition card (or whatever NVIDIA ends up calling these) premium materials and design are still core to their build philosophy. We are also hopeful that these will feature high-quality power circuitry and VRM design than last generation.

If you want to get the full impact of the card's massive heatsink, however, look no further than JDSP_'s beautiful renders which showcase the heatsink in all its glory. The crisscrossing design was expertly recreated and shows just how much cooling surface area the card possesses. Unless the RTX 3080 outputs a ton of heat, this likely means that the card will be capable of running cool and quiet yet being exceptionally powerful. The latest word on the vine is that the RTX 3080 will have 50% more performance than the RTX 2080. If this turns out to be true, then we will be looking at an absolute monster of a card in the $699 price range.

NVIDIA is shifting to the 7nm with their RTX 3000 series lineup as well and considering their history, we expect great things from them. The original RTX series was incredibly powerful and pretty pricey and sales weren't as spectacular as the 1000 series launch which is why we [opinion] expect NVIDIA to take a more lenient approach to pricing with their RTX 3000 series graphics cards [/opinion]. In any case, the company is expected to launch these near fall 2020 (maybe around the time of the virtual Computex conference - although this is not confirmed) and around the same time as AMD's Big Navi launch.