CES 2015 is the biggest platform for companies like Nvidia to showcase new technology in a hands-on fashion to the world. And Nvidia has just revealed a brand new prong for its G-Sync Display Tech in the form of laptop compatibility. Currently G-Sync requires a module to be pre-installed or manually installed in a monitor along with a desktop Geforce card. Not anymore however, because CES saw what is probably the world's first G-Sync compatible laptop.

G-Sync compatibility for laptops pops up at CES this year

Lag, stutter and tear has recently started to become a serious issue with games. Take for example the latest 'AAA' releases, most of which are plagued by these problems (Dragon Age Inquisition's Cut Scenes anyone?) to the point of unplayability. It is this problem that Nvidia aims to solve by offering "buttery smooth gameplay" with their G-Sync technology. Ofcourse AMD, has an alternative called FreeSync which is mostly software based and can claim similar performance (although a direct comparison has yet to happen) at a much much cheaper price. Nvidia's G-Sync tech is currently pretty pricey whileas AMD's tech is relatively cheap. 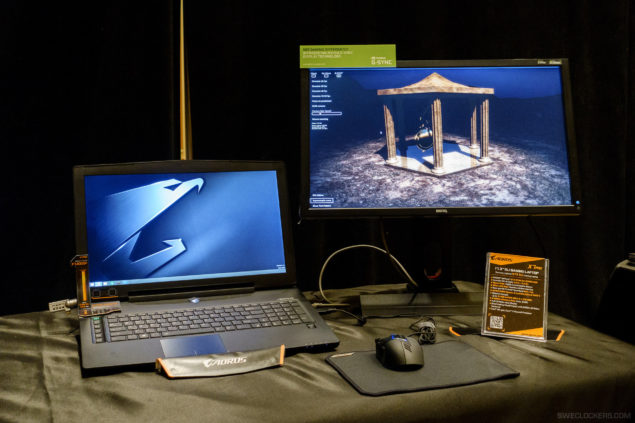 An Aorus laptop running the G-Sync demo on an external monitor at CES 2015 @Sweclockers.com

Yesterday at Las Vegas at CES 2015, Aorus representatives have let slip that Nvidia is bringing G-Sync technology to laptops and Aorus laptops would be one of the first to feature that. The laptop in question was the Aorus X7 Pro which is equipped with dual GTX 970ms in SLI and one of the foremost decisions its owners will face is to either turn on V-Sync or choose higher frame rates. They did emphasize however that G-Sync for laptops is not yet ready on the software side with drivers still requiring more work. Basically, G-Sync for mobility as a product is not yet mature enough for end users.

Do keep in mind however that currently, only external monitors are equipped with the G-Sync module; which means that for the time being, high end laptop users will only be able to use G-Sync with an external monitor. This is slightly unfortunate but a good portion of high-end laptop users do have external monitors for gaming and working purposes. Who knows, maybe Nvidia will figure out a way to reduce the foot print of the module to a low enough volume to be able to fit inside laptops, but that hasn't happened yet. Nvidia is expected to introduce G-Sync for laptops in the first quarter of 2015 (anywhere from January to March).

Samsung hypes about its new “Internet of Things” connectivity, likely to launch by 2020.